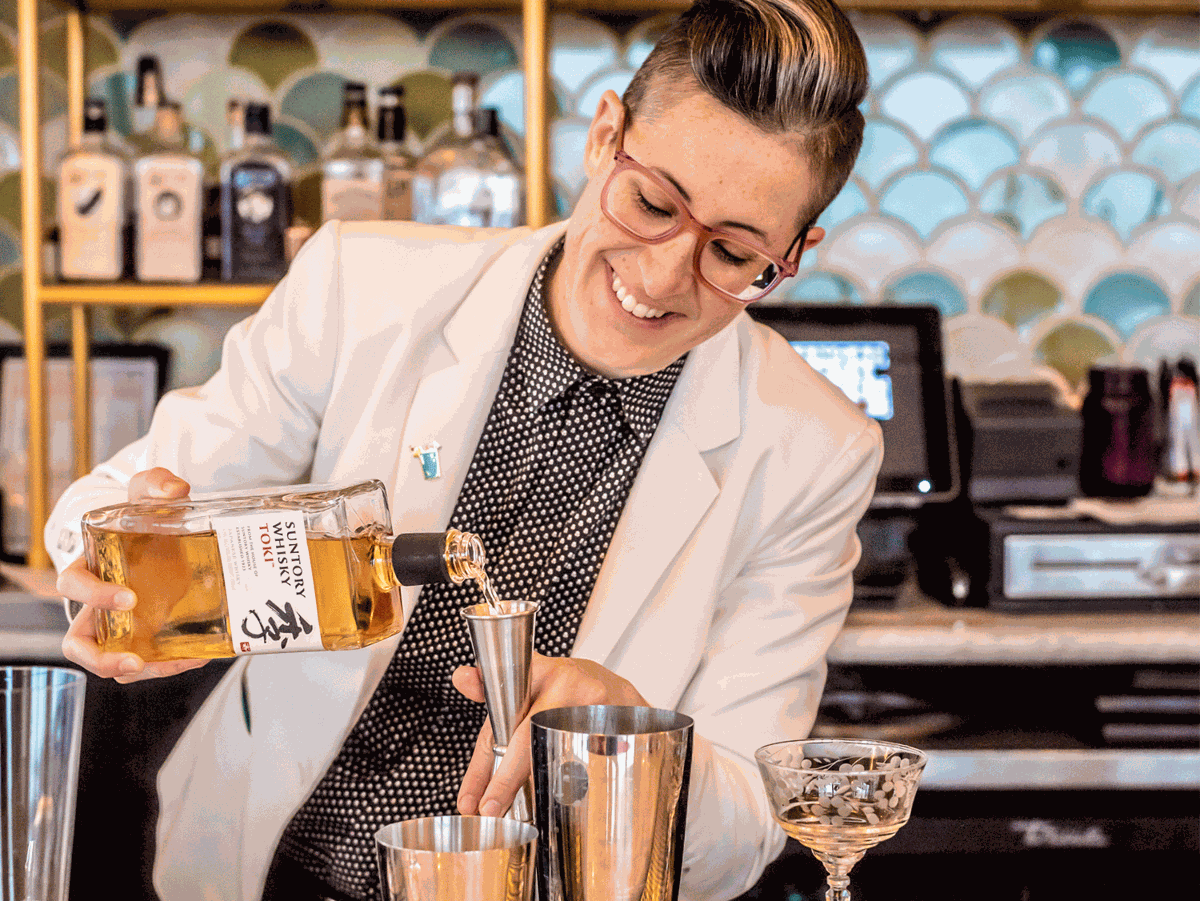 Meredith Barry is the bar manager at Grand Tavern by David Burke. 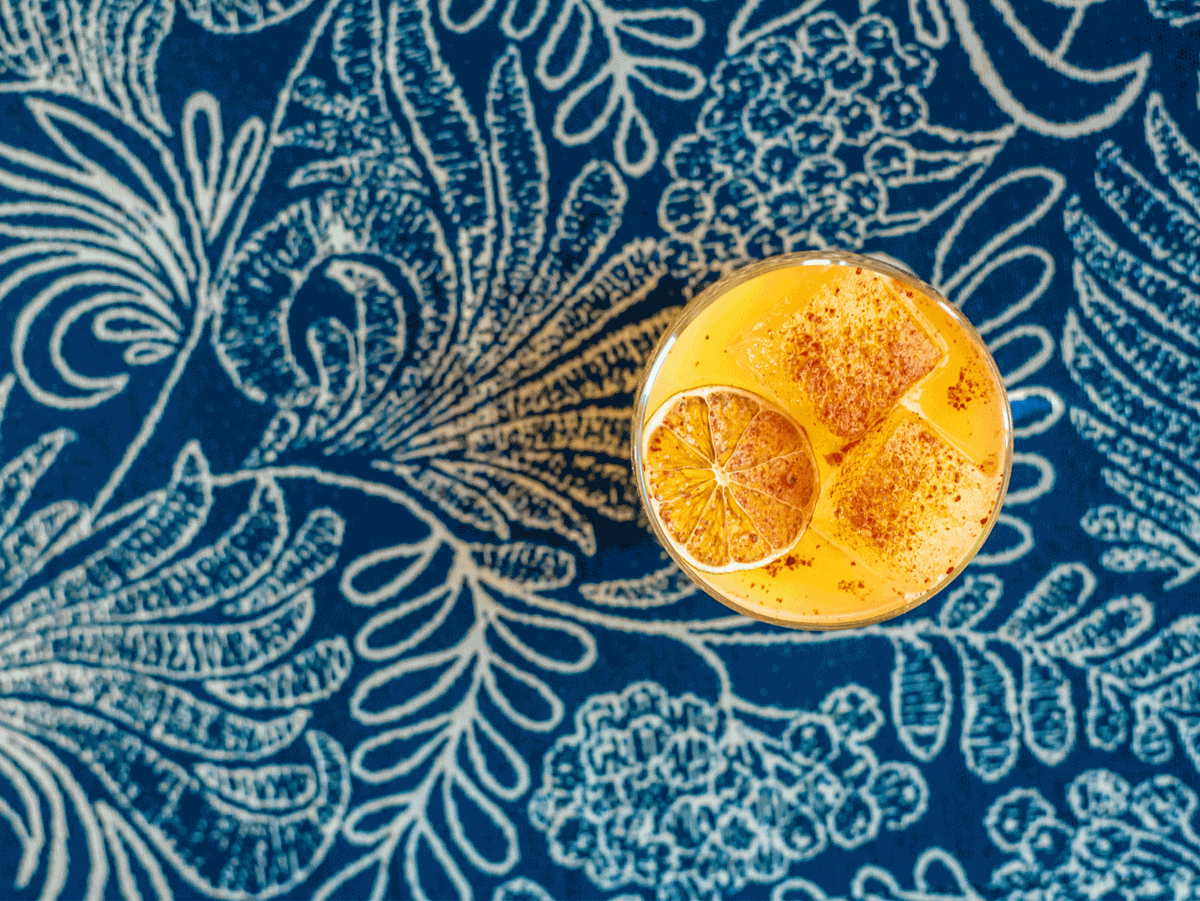 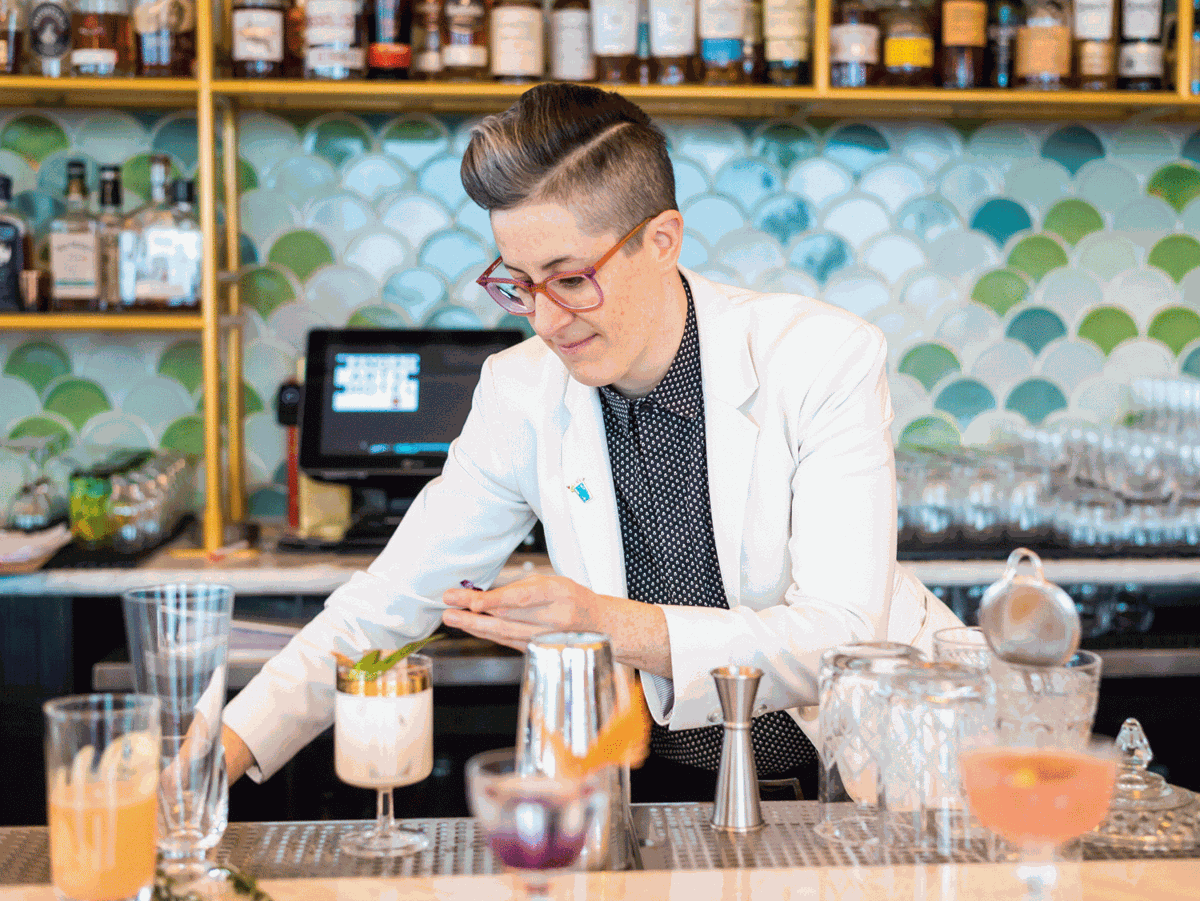 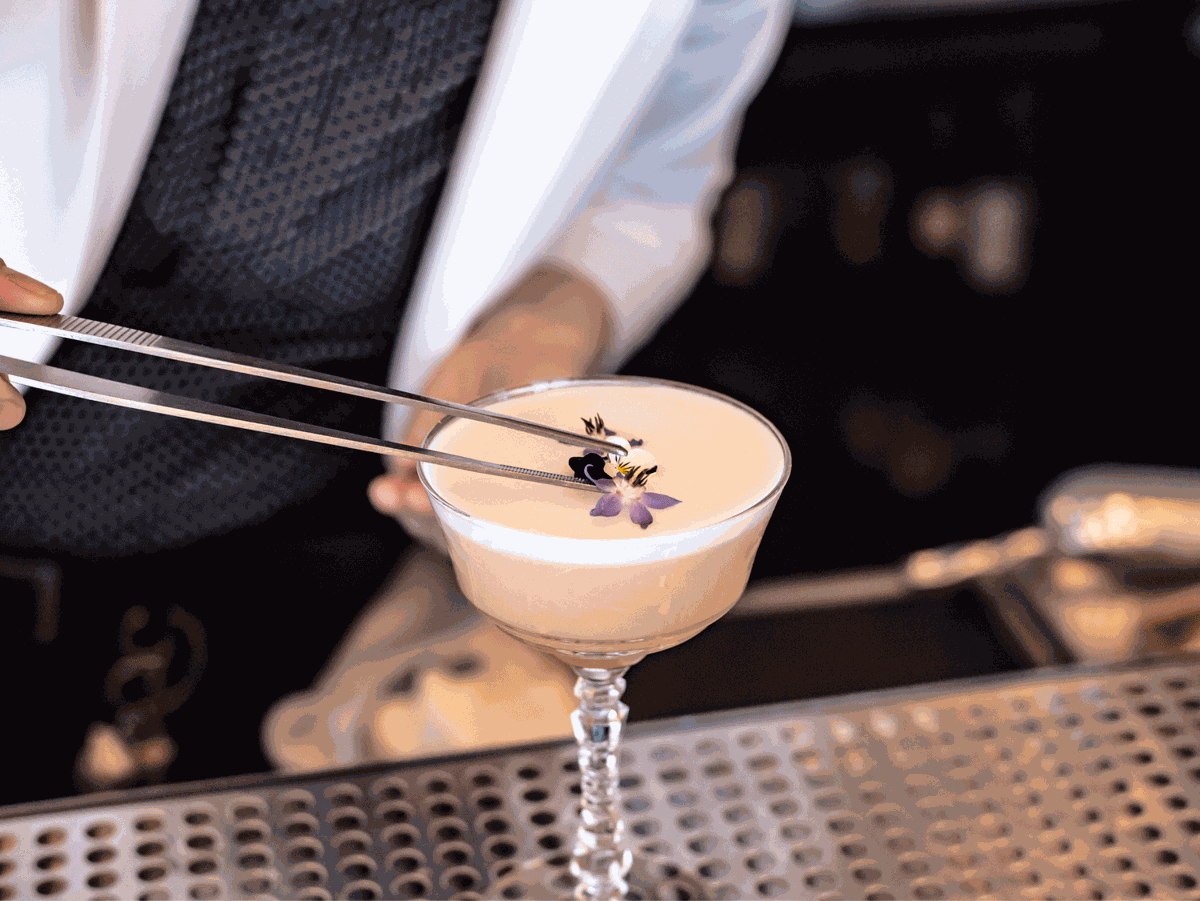 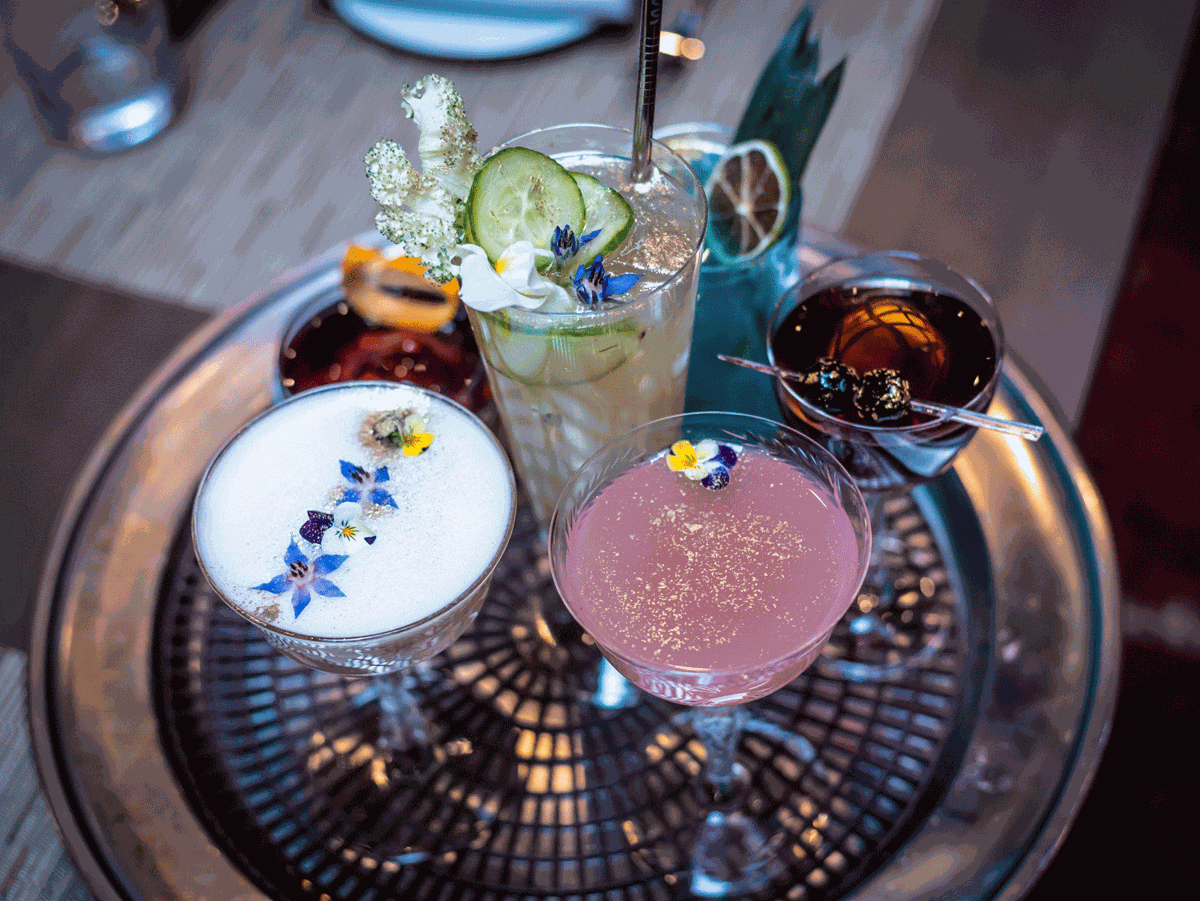 Meredith Barry is the bar manager at Grand Tavern by David Burke.

Meredith Barry had never been to St. Louis before she moved here on a whim, “without a safety net,” as she describes it. While working for the Kimpton hotel brand in Chicago, ESquared Hospitality – which owns and operates Grand Tavern by David Burke inside the Angad Arts Hotel – called and asked if she wanted “to come play.”

“You know when you just need something different? You’re not really sure what it is and you’re not sure if you’re making the right decision, but you jump,” says Barry. That’s exactly what she did when she accepted the position of bar manager at Grand Tavern. “I even sold my apartment in Chicago, so there was no going back.”

From an early age, it seemed as though Barry was destined to work in the food and drink industry. Her dad started working in country clubs when she was in elementary school, and as soon as he could, he put Barry and her two brothers to work.

“I remember, later on, when I would go home on breaks from college, I would work at the Island Oasis Piña Colada station, or whatever it was called,” reminisces Barry. “This was at a time when it wasn’t legal to free pour anywhere in South Carolina, so every bar was filled with mini bottles. It was supposed to control people and make them drink less, but I think it just made it hard to keep inventory.”

Although she was thrown into the industry, Barry admits she used to be scared of it: scared to talk to people, scared of messing up orders. “[At the country club], I was forced to wear this disgusting green polo and khaki shorts while serving glamorous people poolside. It was terrible,” she says. “Although that experience temporarily turned me off of the trade” – so much so that she studied theater in college – “it made me a better person in the end; it put things into perspective for me.”

Relocating to Chicago after graduation, Barry did what many actors do: She got a job in a bar. “I was staying on a futon in the dining room of my friend’s apartment and he pointedly told me, ‘You need to get a job.’ So one day I was drinking at The Globe Pub, where he was bartending, and this very intense English man came up to me, said he’d heard I could pour drinks and told me to get behind the bar.” Barry’s initial response was: “But I’ve been drinking!” No one cared, and she wound up slinging drinks there for two years.

“When I first started at The Globe Pub, I was so bad,” Barry says with a laugh, even confessing that she used to try to talk people into ordering beers instead of cocktails to avoid mixing drinks. “Of course, then I became obsessed with not being bad.”

Barry then went on to Hamburger Mary’s, where she started as a host-server. “At this point, I knew about drinks, and I was a little frustrated being stuck in that position when I could have excelled behind the bar,” she says. “When someone called out sick, I beelined for the bar and started cranking out the drinks. The managers were like, why haven’t we put you here before? And I was like, exactly.” Eventually Barry managed the whole space, which combined a diner, brewpub and nightclub.

We recently caught up with Barry to discuss her journey since then, the craziest cocktails she’s making right now and her take on the sober-curious movement.

What is the most intriguing cocktail you’ve made recently? I just cracked open a new book about rum – I’m constantly reading, by the way, and compiling notebook after notebook (along with tiny pieces of paper that I find stuffed in all my pockets) of cocktail ideas – and I’m really fascinated by Paranubes Rum made in Oaxaca, Mexico. It has the qualities of an agricole rum and a Brazilian rum, and I recently put it in a drink with gin and a pineapple-poblano syrup – it was pretty good.

What inspires your work? Memories. For instance, if a smell evokes a memory, I’m more inclined to create something from that. I have a lot of drinks named after important people in my life, such as my great-grandmother, and I’m very proud of my Italian heritage – all the women in my family are Italian – so I feel very influenced by that, as well.

I’ve also been known to recreate things I enjoy eating as drinks. I’m sure I’ve mentioned this before, but I ate this pistachio-artichoke salad and later made it into a wacky cocktail with pistachio liqueur, Cynar, lemon juice, mint and a mezcal foam – you’re thinking those things don’t work together, but they do.

Do you have a favorite ingredient? Anything someone else plans to get rid of; I’m always like, I can use that. The first example that comes to mind is when the chefs were going to throw out leftover bok choy and I said, “Give me that! I’m going to Vitamix this, combine it with some tequila and pineapple and call it a day.”

Do you have a secret weapon spice, ingredient or technique? Something that I love, that shocked most of my bar staff, is the reverse egg white shake. For this technique, I do a wet shake and then a dry shake, so you don’t have to double strain and the foam comes out beautifully. Now everyone behind the bar [at Grand Tavern] loves it; they don’t have to clean that stupid strainer anymore!

I also like to make complex stir drinks – who doesn’t want a beginning, middle and end to their cocktail? – that have a citric element without adding citrus, so the texture remains clean. Bitters accomplish that, but a little salt and citric acid will do it too.

I strive to do things as efficiently as possible. I’m always asking, “How do we make this drink the fastest and the most correct?” If you consider that I teach people how to make 10 drinks at a time, it makes sense. I tell new hires to think about their area as a stovetop: Let certain things stew. There are plenty of drink elements that can go on ice that you don’t have to touch until you’re ready to use them.

In your opinion, how has the local bar scene changed in the past year? There are more places pushing the envelope, other than Planter’s House, and awesome spots, such as Elmwood, are featuring more non-alcoholic cocktails on their menus. That’s so cool; I don’t think that anybody should be robbed of flavor just because they’re not drinking. Your drink shouldn’t be called a “mocktail” and it shouldn’t be thrown together with whatever crap juice the bartender can find first; you should have a fun experience, as well. When someone orders a zero-proof drink from me, I load that thing up with delicious fresh juices, flowers, all the bells and whistles. I want to make everybody who’s drinking jealous of your N/A cocktail.

Are there any local bartenders or bar owners whom you admire at the moment? I mean, Ted Kilgore, [owner of Planter’s House and Small Change], is a legend. He and I judged a competition by Compass Box [at the Angad Arts Hotel] and I was totally fangirling inside the whole time; he’s just so brilliant.

What advice do you have for those of us creating cocktails at home? Fresh is always best, and drink with friends. [Laughs.] That’s it.

What are your plans for the future? I haven’t really paid attention to the fact that I’m getting older, but all of a sudden I realize that I am old – I’ve earned every one of these grays – and when I think about the future, I see myself teaching the next generation of bartenders. I want to make sure they put in the time, put in the work, because it’s an amazing trade that can take you anywhere in the world. I want to offer a similar support system to the one I had for up-and-comers in the St. Louis area, so that the bar scene can continue to grow and innovate and show the rest of the nation that this city is a contender.

The dinner will feature wine pairings from Component Wine Co.

Learn to Mix Holiday Cocktails Like a Pro With Grand Tavern's Meredith Barry on Dec. 9

Guests will learn how to make three cocktails while light bites are served.