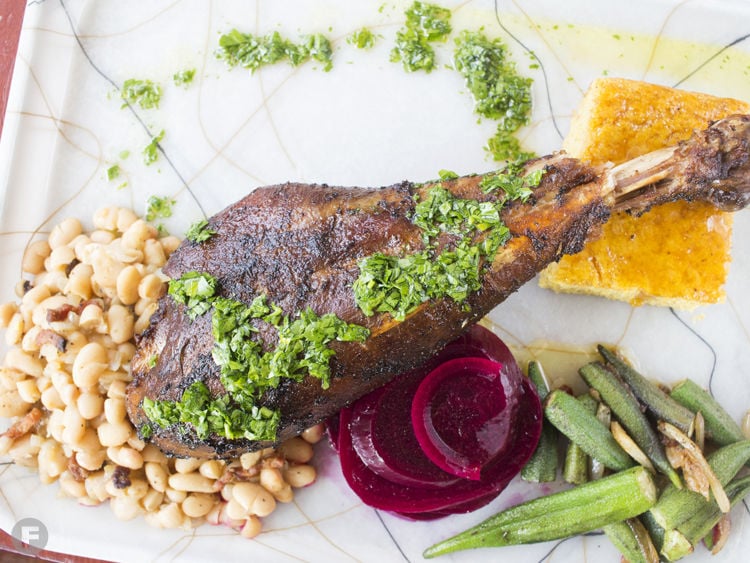 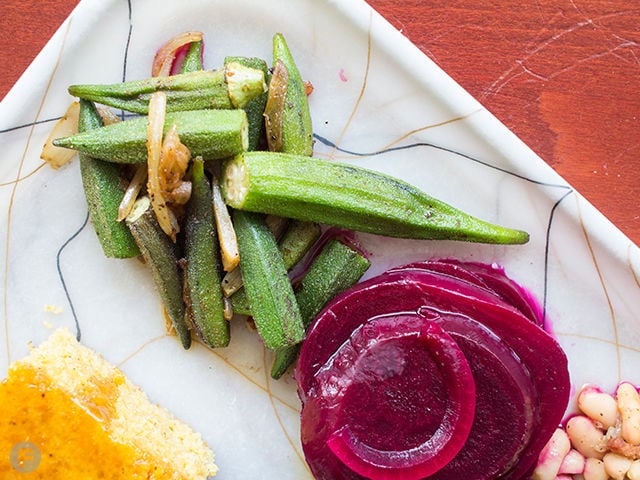 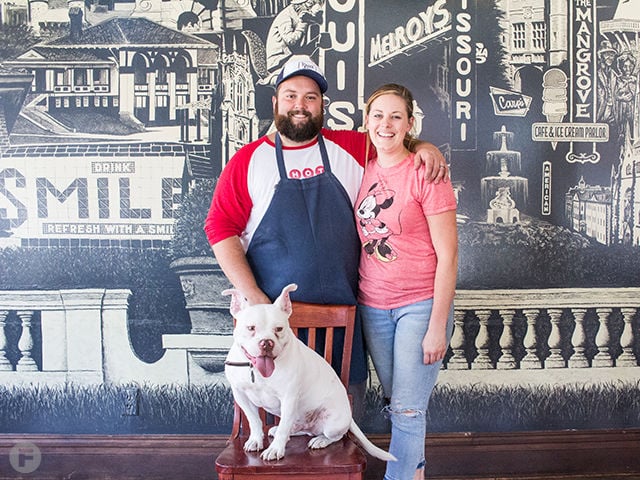 Rick and Elisa Lewis with their dog, Cowboy. 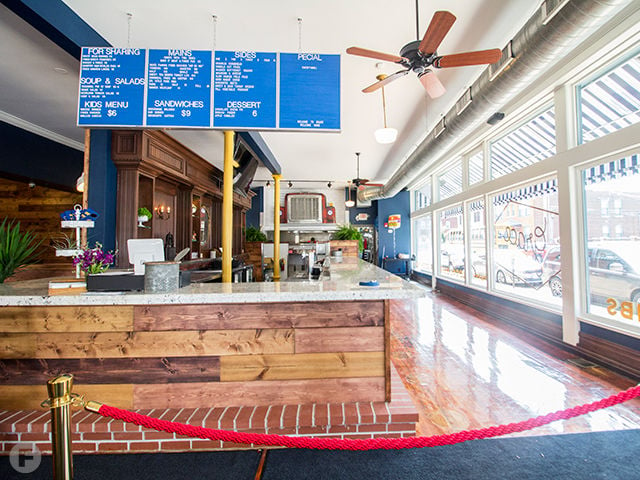 The restaurant will feature counter service as well as bar seating. 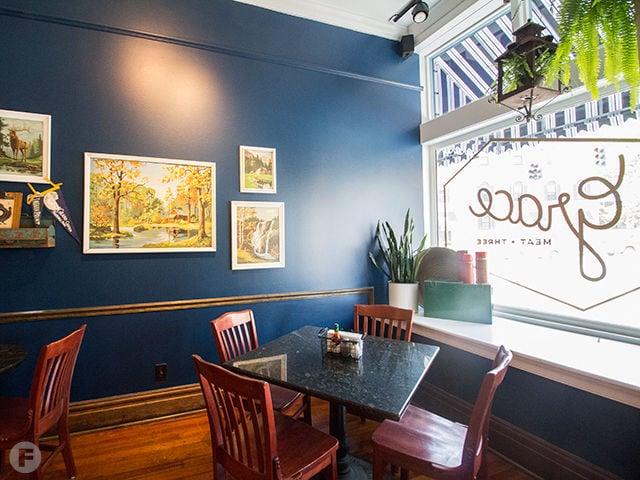 The dining room features both modern and rustic elements. 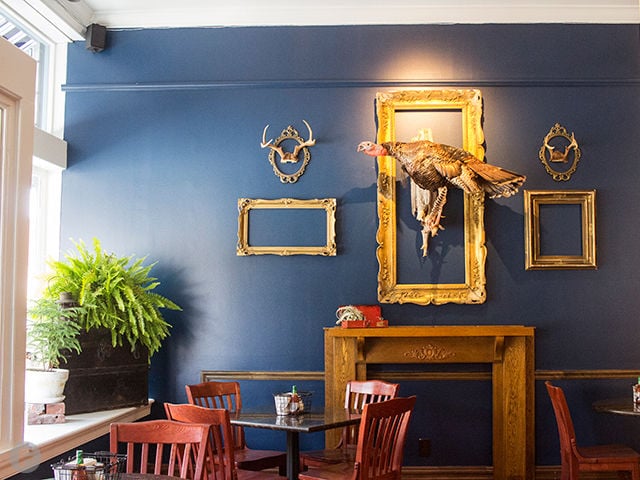 The space's color scheme is navy blue and gold. 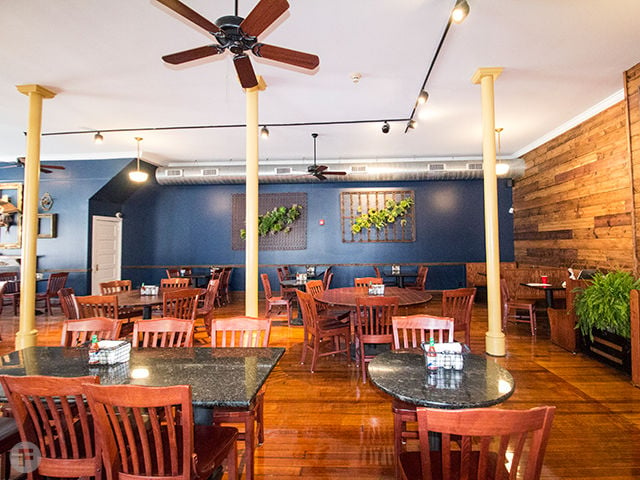 Around 100 seats are available altogether. 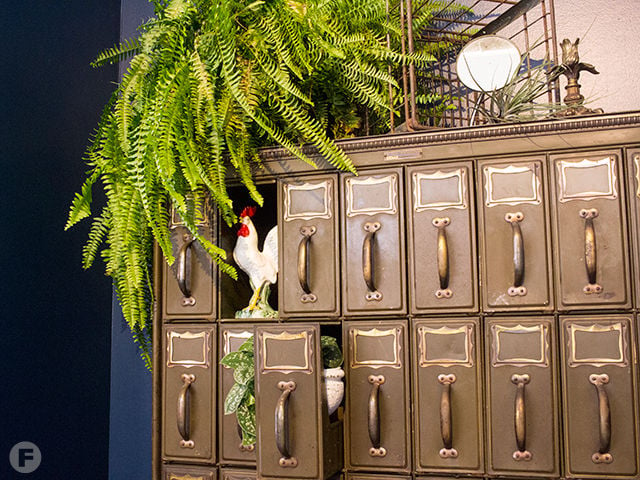 Salvaged decor and plants peek out from every corner. 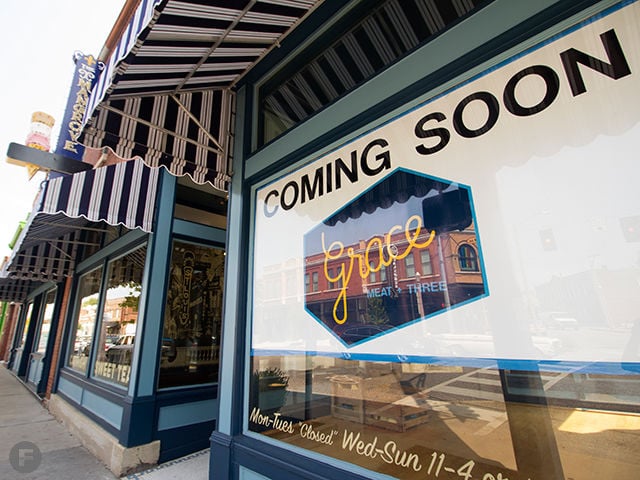 Coming soon to the Grove.

Rick and Elisa Lewis with their dog, Cowboy.

The restaurant will feature counter service as well as bar seating.

The dining room features both modern and rustic elements.

The space's color scheme is navy blue and gold.

Around 100 seats are available altogether.

Salvaged decor and plants peek out from every corner.

Coming soon to the Grove.

The highly anticipated opening of Grace Meat + Three is set for later this month. The latest venture from husband-and-wife duo Rick and Elisa Lewis debuts on Sept. 13, featuring the couple’s take on Southern cuisine with an emphasis on down-home hospitality in a fast-casual setting.

“Our big focus is on service and being really community-driven,” Rick says. “The food will be really kind of rustic, refined Southern fare…. It’s country food brought to the city for working-class people. It’s like inviting people into our home for lunch.”

Grace Meat + Three fills the approximately 4,000-square-foot space previously occupied by Sweetie Pies at the Mangrove and features room for around 100 guests including first-come, first-served seating at the bar. As reported by Feast in June, the name "Grace" reflects "good virtue, courteous goodwill and the short prayer of thanks before a meal.”

Elisa designed the space with a modernized rustic vibe highlighted by a navy blue and gold color scheme and knotty pine accents. Reclaimed materials collected during visits through the south as well as around the Lewis’ home in Cedar Hill, Missouri, make up the decor, including vintage shutters, bedsprings filled with greenery and the front end of a vintage truck mounted on a back wall.

Fixtures from Sweetie Pies that remain in the space include some of its dining tables as well as a St. Louis-themed mural at the entrance. Additional furnishing comes from Goebel & Co. such as bar furniture and a communal table for the front room.

In the kitchen, Rick works with local ingredients from purveyors including Freshski’s, Bohlen Farms and Side Lot Farms. Additional products include Buttonwood Farms turkey legs, some pork from Wenneman Meat Co. and Duroc cross-heritage breed ribs.

“The ribs are going to be fantastic. We’re rubbing those with a house blend of spices and then we’re smoking them over charcoal with a peach glaze,” Rick says. “Besides that, we’ll always have catfish and fried chicken, and then some other proteins like turkey legs will be seasonally inspired. We’ll do a daily protein, as well, that could vary from anything like pan-roasted trout to pulled pork and roast beef.”

A focus on vibrant sides is also at the forefront of the menu, including everything from mac ’n’ cheese and marinated beets to rotating varieties of peas and greens. A vegetarian highlight will be country-fried tofu featuring locally made MOFU tofu that is marinated, breaded, fried and served with mushroom gravy.  For dessert, choose from banana pudding, chocolate chess pie and rotating seasonal options such as cobblers.

Non-alcoholic beverages include Excel Bottling soda on tap, Kaldi’s Firepot teas and three types of iced tea: unsweetened, sweetened and a seasonal sweet tea in flavors such as ginger-hibiscus. Alcoholic drink options include a selection of liquors, four local craft beers on tap, and canned and bottled beers.

Grace Meat + Three’s hours will be Wednesday through Sunday from 11am to 4pm or until sold out.