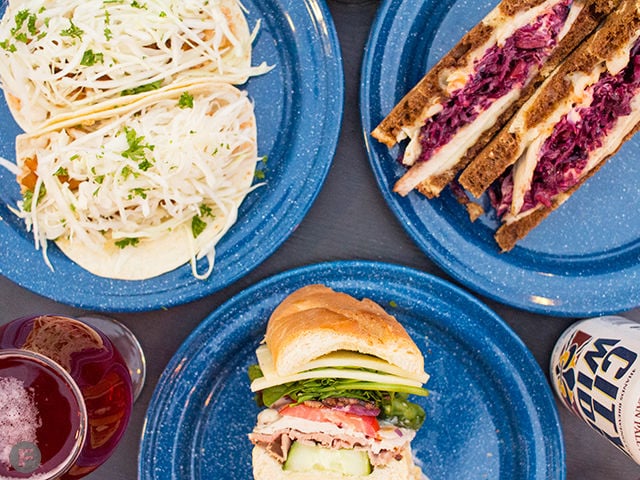 A selection of items from The Little Dipper: chicken tacos, Carolina Reuben and Deli-Lama. 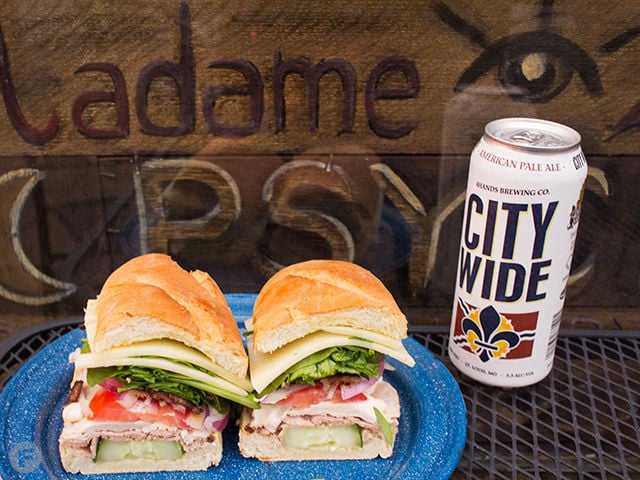 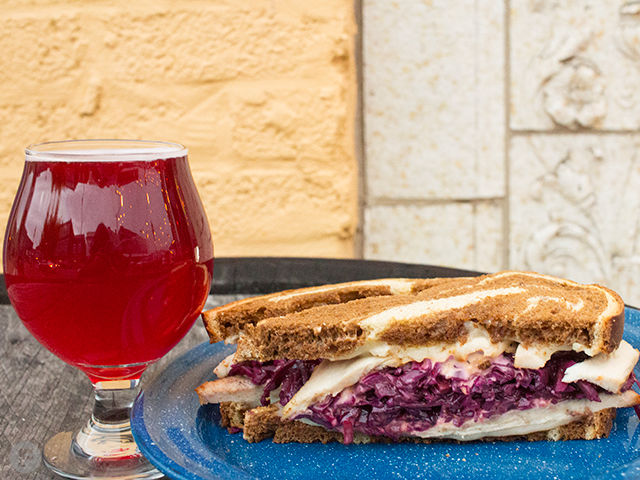 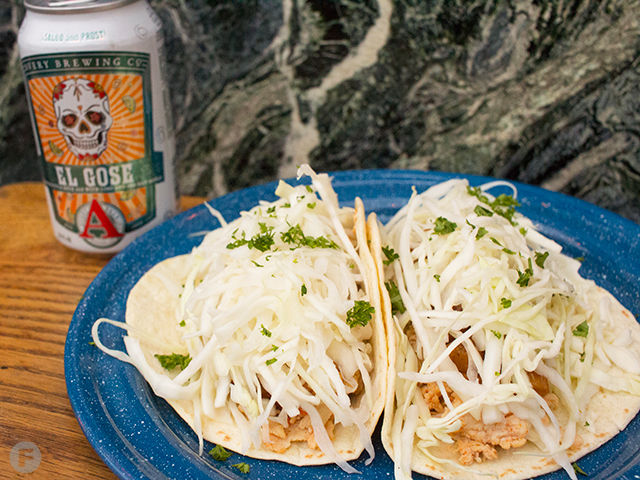 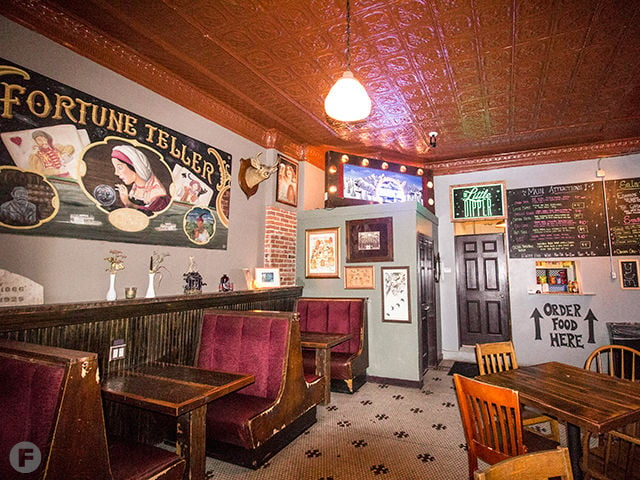 Guests order sandwiches at the walk-up counter located inside the Fortune Teller Bar. 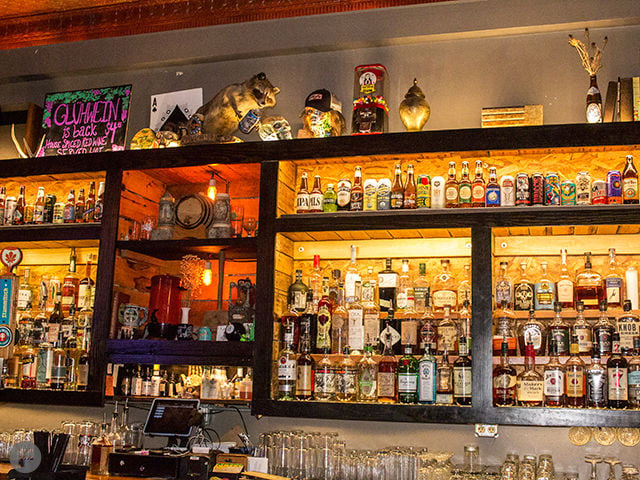 Drinks are available at the adjacent bar. 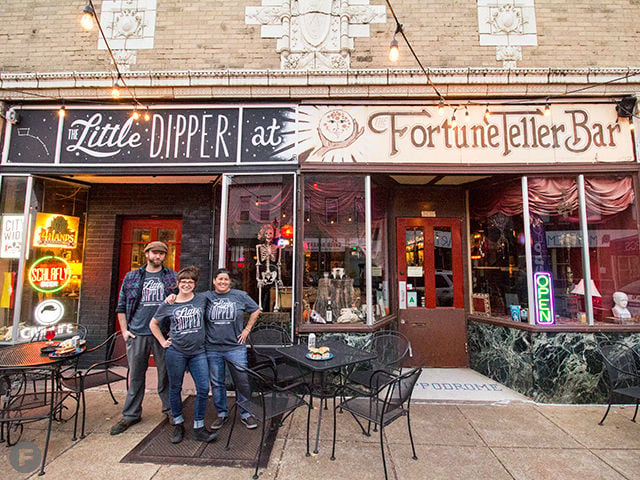 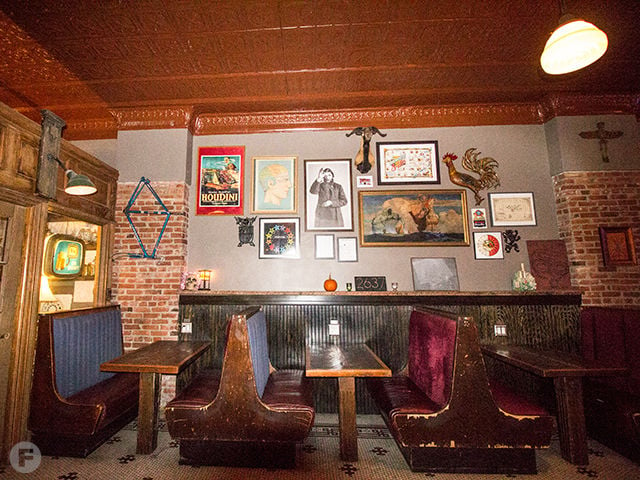 Chef Tanya Brown took over ownership of the Little Dipper – which was previously bought out by Laura Sisul and John Buehlhorn from original proprietor Jason Paul – when the shop closed in August. Brown’s culinary resume includes working in local kitchens like Tree House Restaurant and Sub Zero Vodka Bar.

The idea to combine concepts came about during a conversation between Brown and the Fortune Teller Bar co-owner Matt Thenhaus. The sandwich shop now operates as its own business inside the bar, replacing the prior in-house, backyard-style barbecue menu.

“I felt like Cherokee Street was the right neighborhood for the Dipper. I can’t express enough that I didn’t want to go anywhere else. This is my home,” Brown says. “The combined efforts of everyone here made it all possible – I couldn’t have done it without them.”

Signage created by Art Monster’s Josh Goor ties the concepts together on the front of the building. The Little Dipper’s original logo was preserved and made into a light fixture by the Fortune Teller Bar co-owner, Sam Coffey, to highlight the ordering window located at the back of the bar.

With the shared dining room, patrons of the Little Dipper can now choose from more than 70 seats by the bar or on the patio – a substantial jump from the 15 seats available at its original location. Brown works with back-of-the-house crew – Ted Frerker, Jenna Reeves and Natalie Erdelet – to bring her menu to the new kitchen.

The list of options includes mainstays such as the business’ namesake French-dip style sandwich and Brown’s revised take on the Carolina Reuben with smoked turkey, Swiss, Sriracha 1000 island and Carolina slaw on marbled-rye bread.

“I would say it’s like elevated comfort food from all regions,” Brown says. “It’s from scratch as much as possible. We smoke all the proteins and everything’s handled well. I try to source locally whenever I can.”

Breads come predominantly from Fazio’s Bakery, while a gluten-free recipe is in the works in the Little Dipper’s own kitchen. Some meats come from Kern Meat Co. while produce is often handpicked at Soulard Farmers’ Market.

Brown hopes to cater to her vegetarian and vegan clientele even more than before and will offer frequent specials for all types of eaters. Look for items including curry-lentil soup, falafel and homages to the Fortune Teller Bar’s previous food offerings such as brisket and a buffalo-chicken sandwich.

“We cook every single thing from the heart and the soul,” Brown says. “We cook food that we want to eat and that doesn’t waiver. Even in an amazing dive bar like this, you’ll get food that is cooked with love.”

The Little Dipper is currently open Monday through Saturday from 4pm to midnight as well as Sunday from 4 to 10pm.

A selection of items from The Little Dipper: chicken tacos, Carolina Reuben and Deli-Lama.

Guests order sandwiches at the walk-up counter located inside the Fortune Teller Bar.

Drinks are available at the adjacent bar.