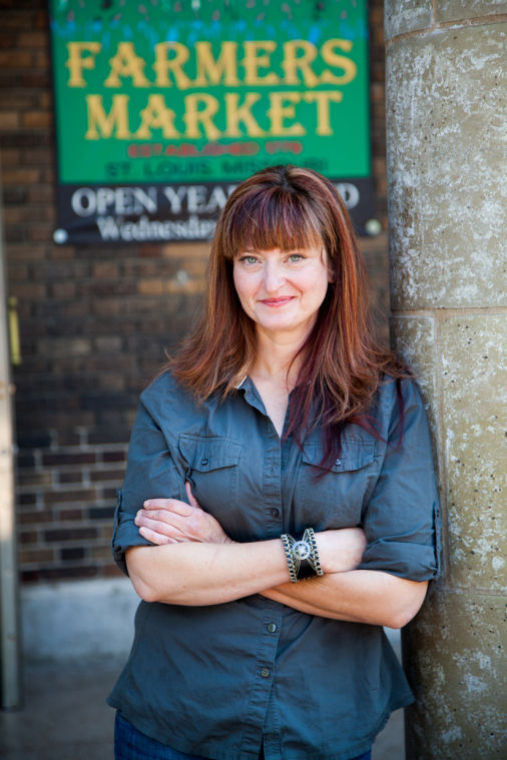 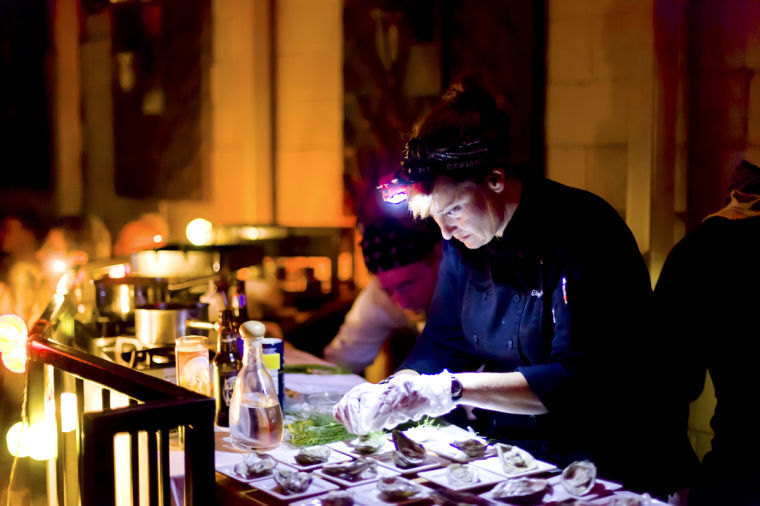 Liz Schuster has a passion for film, food and the fantastical, showcased in her work at Tenacious Eats. Before she launched the “full-contact dining” experience, Schuster was banquet chef at The Chase Park Plaza, where she met her fiancé, pastry chef Steve Schmidt. She also worked as the executive chef at The Scottish Arms in the Central West End, where she hosted her very first Tenacious Eats movie and dining experience. From weddings to monthly viewings, Tenacious Eats has grown immensely: The dinner theater is celebrating its sixth season this fall. We caught up with Schuster to learn more about her favorite spots in St. Louis, her ideal PB&J and how she hopes to grow Tenacious Eats.

What's your favorite ingredient to cook with and why? I think the advantage to being a female chef is that what I like to cook with changes on a daily basis, especially for what I do. [laughs] Right now, my favorite thing to cook with is tarragon. I’m in love with tarragon right now. It’s a versatile herb that I’m falling in love with again like a good book.

Do you have a secret weapon spice/ingredient/technique? A thing that I learned from one of my mentors, Chef Marcel – a French chef I worked with at The Chase – is that honey is a secret ingredient when making stocks and demi-glace. Instead of deglazing the pan with wine right away, he taught me to deglaze with honey first. I thought it was going to burn and singe, but it doesn’t. It bubbles and pulls every bit of food out of the pan. It’s a wonderful trick and great way to protect the stock and demi-glace from becoming bitter.

What's your perfect day of eating in St. Louis? I really like First Watch. I love the fact that I can have breakfast with greens, that it uses fresh ingredients and that it doesn’t use butter substitute. I love whoever is doing their sunny-side-up eggs because they nail it every time. That’s a big thing for a chef. It’s always consistent and that’s a lot for me. For lunch, I would say Nudo House. My good friend Marie-Anne Velasco is executive chef there. Her menu is mind-blowing, fun and playful. The dumplings there are succulent and perfect. I wish I could go there more often. For dinner, I love Yemanja Brasil in Benton Park. I’ve never been disappointed in any meal there. It’s a mystical experience. I highly recommend any of the chef’s specialties. Right now, I’m also addicted to Tamara Keefe’s vegan chocolate ice cream at Clementine’s Naughty & Nice Creamery. She has an ice cream called Chocolate Cabernet and – oh my ‘lanta  – you get the full chocolate and Cabernet experience. It’s genius! She has taken a chef who isn’t fond of ice cream and turned me into an addict.

How has the local food scene evolved over the past year? It seems almost overwhelming, because it’s huge! Every time you turn there’s another place opening up. St. Louis has this incredibly diverse culinary world that’s hard for me to even keep my finger on what’s going on. It boggles the mind what all chefs are doing.

Who are St. Louis chefs you admire at the moment? Marie-Anne Velasco is number one. It’s hard to, in such a huge culinary world, have an independent voice and stay true to it. When you’re cooking for that many people, how do you write a menu that is going to be diverse enough, original enough that you stay true to yourself as far as honesty is concerned? I think she nailed it. I’ve always admired her. She’s just one amazing chick.

What concepts or styles of cooking do you hope to see added or expanded in St. Louis? Conceptually, I really would like more breakfast options. Breakfast and brunch are the best meals of the day, because of the combinations of protein, sweet, salty and pastries. I would like to see more breakfast options because there’s so much that could be done with it. There’s an amazing place I visited in New Orleans called The Ruby Slipper Cafe, and all they do is breakfast. They did like an étouffée Benedict with fresh garlic-butter crab with poached eggs on top. Why can’t we do that here in St. Louis?

What do you like to cook at home or on your day off? I love to make jams and jellies. Most recently, my fiancé and I were very excited that, after three years, we could finally harvest peaches from our peach tree. The process of blanching, peeling and cooking it down makes the house smell wonderful. My house still smells like peach butter! Outside of that, my family really loves it when I make German dishes. There’s something about making rouladen at home that really resonates with me and many generations in my family.

If you could tell home cooks one thing, what would it be? Cooking is more than sustenance or fuel. Even if you’re cooking for yourself, you need to think about cooking as sustenance for your soul and family. Even if it’s something you’re cooking to reheat another day, it’s communication to your significant others, children, family and friends. I get a little aggravated with the fast-food movement. To me, it’s like a one-night stand. You’re taking care of a momentary need and you feel terrible afterwards. Just making a simple grilled cheese, stew or casserole, you’re creating food memories and connecting with others. I don’t think there’s anything more intimate than that. Food is very personal and intimate.

What is your first food memory? One that stuck out in my mind is making Concord grape jelly with my grandmother in Benton Park. I think that’s why I like the process [of making jelly] so much. Another is my mom’s meatloaf.

What’s the most intriguing dish you’ve made recently, and why? I do some weird stuff, so it’s always interesting. Recently, the most intriguing was a bison Wellington with a small amount of black truffle and an Ozark mushroom pâté that I rolled inside. After that, I started developing a pizza for Firecracker Pizza & Beer in The Grove using that same pâté as a base. We were calling it Funkadelic. Everyone who has had the Funkadelic has had an umami experience. It started as one dish and became another. The mushroom pâté is the most intriguing.

How do you approach R&D at your restaurant, and what inspires that process? For the movies, sometimes I can’t find the menu by simply watching the film. Sometimes I turn off the dialogue and pay attention to the soundtrack. I try to read as much as I can from the narrative. We’re going to be showing Beetlejuice again this October for Halloween. I couldn’t find the menu outside of the “grab the face” scene. I was confused, and I had to make sure the menu can stand on its own. So I started just listening to Harry Belafonte in the car. Then I was dancing in the living room with my 10-year-old to The Banana Boat Song and it clicked. That’s the food. It’s island food – Haitian, Portuguese, Jamaican. All of these influences I drove from the music instead of the film. It worked so well because it’s the undercurrent throughout the whole movie. Sometimes I have to break away from the film and think outside of the box. When we do period films, I do a lot of research to make sure the food is time period-appropriate. It all just depends because we deal with so many genres. That’s what I love about the challenge.

What are your future plans? We have a few options to possibly do some Tenacious Eats shows for larger venues. This is our sixth season of Tenacious Eats. I just want to see it continue to grow and evolve. Right now, I’m trying to figure out our winter schedule. It’s fun every single show with at least 75 percent of the audience new to Tenacious Eats. I think that is what propelled me forward. I would love to say that we would open up a normal restaurant, but I don’t see [doing] a movie every single day. This is event-based. It’s an event in itself, like a culinary circus that’s always moving. I also look forward to doing more shows out of town and doing Tenacious Eats show in other places.