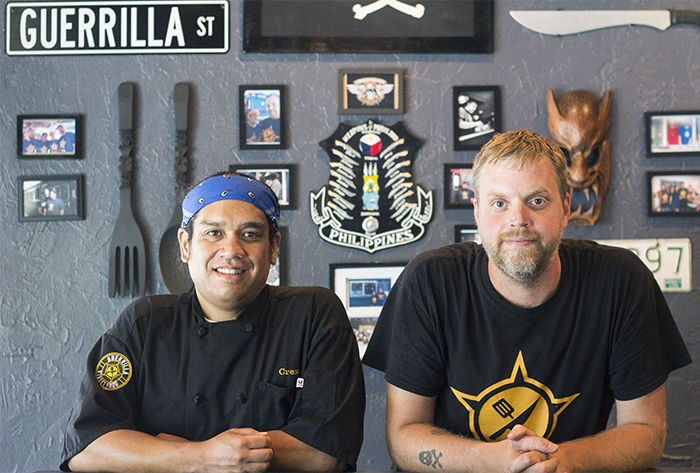 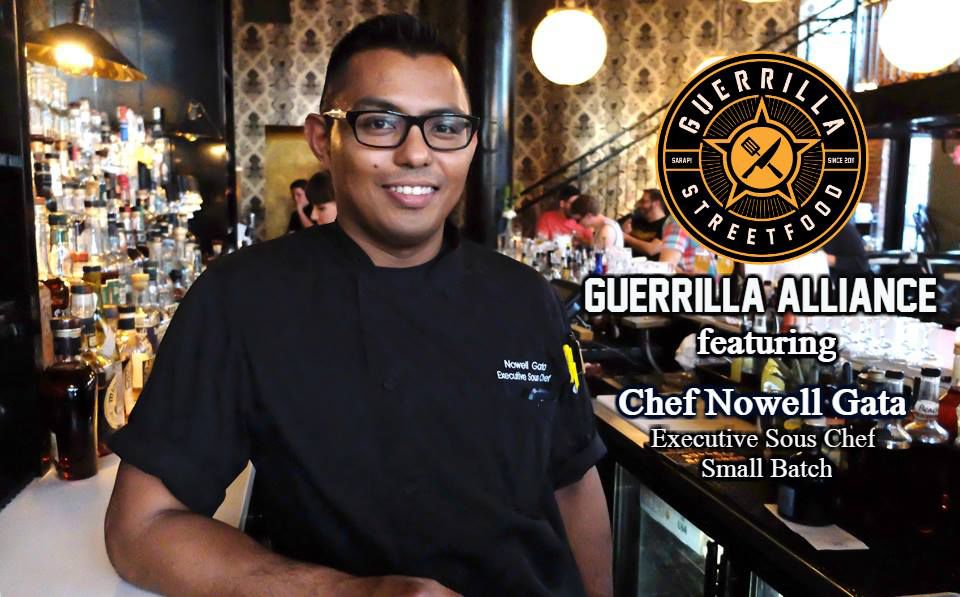 This weekend, Guerrilla Street Food will kick off a new project: monthly Guerrilla Alliance Dinners. For the new series, co-owners Brian Hardesty and Joel Crespo will invite guest Filipino chefs and chefs knowledgeable of the cuisine to collaborate with the pair.

Hardesty and Crespo were inspired to launch the series after returning from their recent two-week tasting tour of the Philippines. Hardesty also recently hosted a traditional Kamayan dinner with Malou Perez-Nievera, in which Filipino staples were served on banana leaves and guests ate with their hands.

To kick off the dinners, Small Batch executive sous chef Nowell Gata will lead diners in a high-end, six-course tasting dinner, complete with wine pairings. "Nowell's vision for the dinner is a reflection of his childhood," Hardesty says. "The perspective of nostalgia will be incorporated into refined dishes."

Hardesty also notes that the dinner will include top-notch service, and the small dishes will follow a progression that will leave diners satisfied.

Crespo's role in the collaborations focuses on making sure cultural context and goals are kept in mind with the dinners.

"We figured that being one of the most visual aspects of Filipino culture in St. Louis that we wanted step up to the plate and help foster solidarity with the Filipino food community and general community as a whole," Crespo says. "St. Louis doesn't have a strong, central Filipino community that I am familiar with, and we want to serve as that bonding element."

The Guerrilla Alliance Dinners are expected to run for a full year. May's dinner will feature chef Marie-Anne Velasco, who will open Nudo House this year with Mai Lee's Qui Tran. Hardesty and Crespo also hope to bring in a chef that they met during their trip to the Philippines.

By bringing in guest chefs from across the country, Hardesty hopes the series will excite and educate the St. Louis community about Filipino cuisine.

"One idea we have is to bring a dozen or about 20 mothers of Filipino chefs in to make their signature dishes," Hardesty says. "A lot of Filipinos I've talked to have mentioned that the best food they've had is their mother's. So, this would be a festival-style dinner to celebrate family and food."

Crespo hopes the dinners will be an outlet to show the many sides and perspectives of Filipino cuisine, noting that people may be most familiar with more iconic items like adobo.

"What we learned on our Philippines trip is that there is a whole range of Filipino cuisine; it's not just one thing," Crespo says. "We hope to show the complexities and nuances of 7,000 islands worth of cuisine. There's a lot to show and learn!"

Sunday's Guerrilla Alliance Dinner will seat 22 guests. Tickets for the dinner and wine pairing are $80 per person and are available for purchase here. The dinner will be held from 7 to 10pm at Guerrilla Street Food.

At Kamayan Night, Malou Perez-Nievera Brings a Taste of Manila to the Midwest

The St. Louis chef connects her past life in the Philippines to her experience cooking in the U.S. at the Filipino pop-up series.

Soon, you can wash your chicken adobo down with a Katy.

Guerrilla Street Food, KC Pinoy Team Up For Filipino Pop Up on July 29