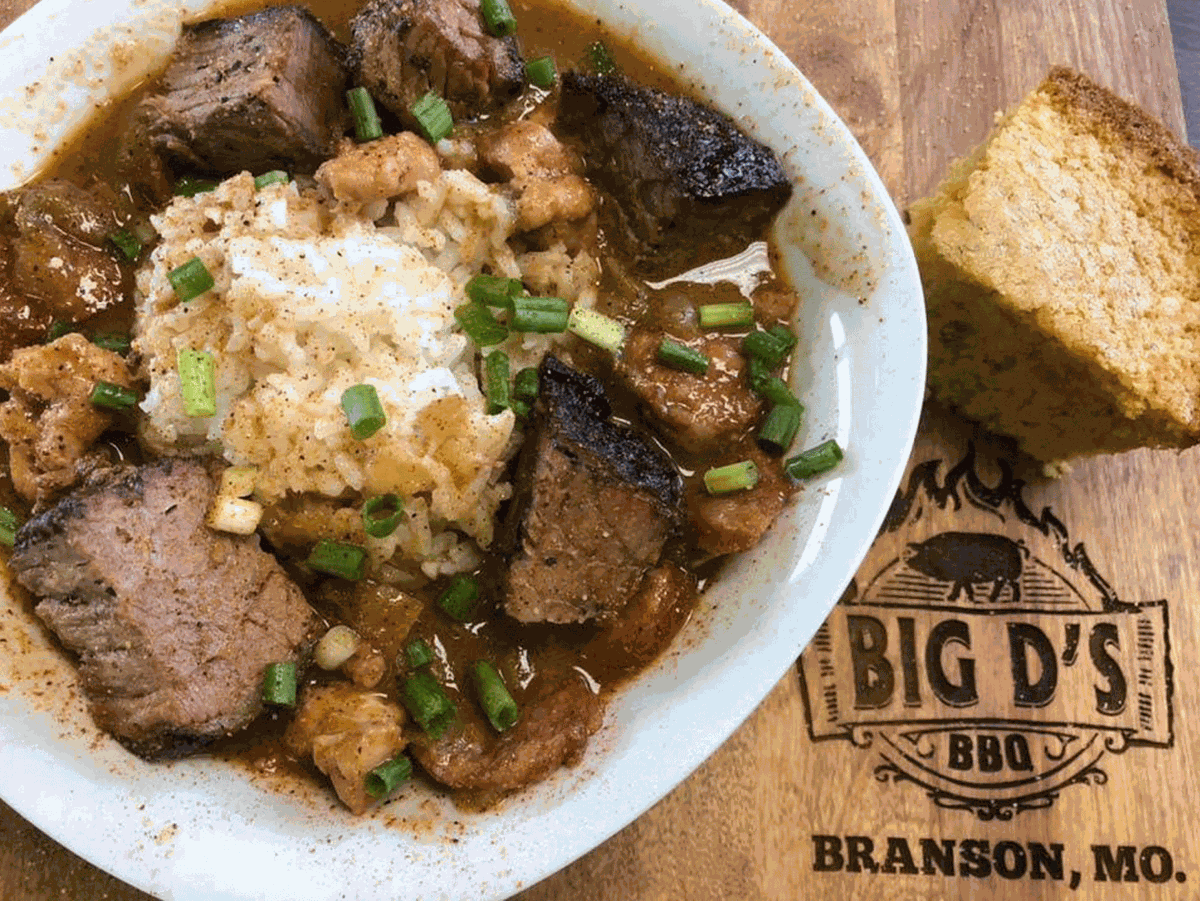 The burnt end gumbo from Big D's BBQ is a must-try special. 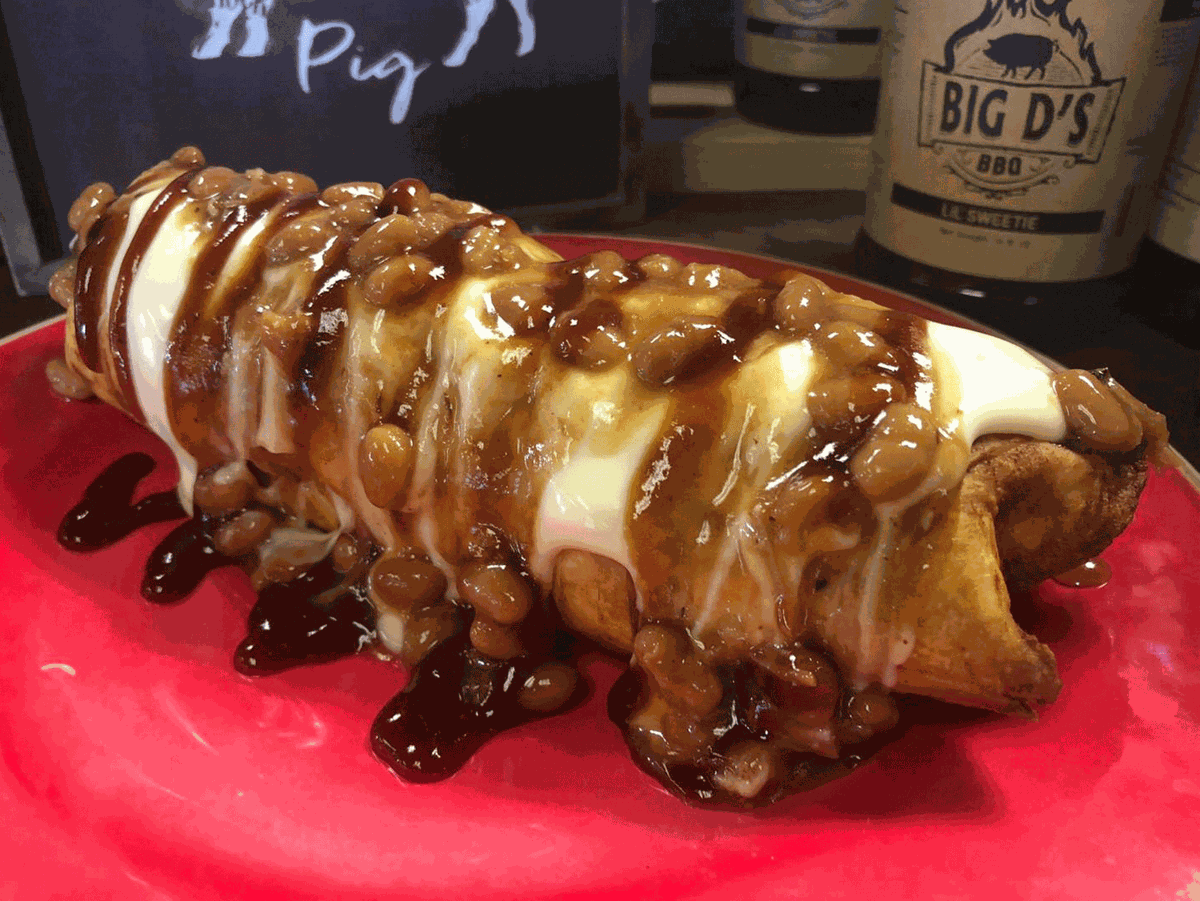 A chimichanga like you've never had before, the BeefyChanga from Big D's BBQ features a 9-inch tortilla stuffed with brisket and smoked mac ‘n’ cheese and then fried and topped with smoked queso and pit beans.

The burnt end gumbo from Big D's BBQ is a must-try special.

A chimichanga like you've never had before, the BeefyChanga from Big D's BBQ features a 9-inch tortilla stuffed with brisket and smoked mac ‘n’ cheese and then fried and topped with smoked queso and pit beans.

Dana Peterson has done incredibly well for a first-time restaurateur. In 2017, he started Big D’s BBQ as a food truck, tooling around Branson, Missouri, dishing out ribs and brisket to hungry diners. A year later, he opened a restaurant in the now-shuttered Starlite Theatre, and after another year, he debuted a brick-and-mortar location of Big D’s BBQ at 1550 State Highway 248.

Although he doesn’t have formal culinary training, Peterson possesses a deep passion for smoked meats, competing on the barbecue circuit for 20 years before leaving his job as a financial adviser and turning his hobby into a career.

While Big D’s has earned a reputation for its dry-rubbed Memphis-style ribs, which are slow-cooked over cherry wood, and its dry-rubbed, central Texas-style brisket, which is smoked over pecan wood, its more creative fare and daily specials are also attracting attention as of late. Think pulled pork egg rolls, deconstructed jalapeño popper grilled cheese and a sandwich with chopped brisket, Swiss cheese, smoked cabbage and Alabama white sauce piled on grilled rye bread that Peterson has coined the Redneck Reuben.

Here, Peterson shares some of the most surprising dishes he’s smoked – and subsequently devoured – as well as the reasons for his success from the time he launched Big D’s BBQ until now.

Customers love your daily specials. Tell us about those dishes. I have six specials a week. Basically, the idea is to show the versatility of barbecue and smoking. You can smoke anything – and I have and I will. I use wood and smoke as an ingredient of different flavor profiles. We did a smoked cashew chicken one time. We smoked lasagna. We even have a smoked bacon-bourbon pecan pie, which takes about an hour and a half to smoke; it’s my wife’s recipe, and it’s unique to our restaurant. The burnt end gumbo has become one of the most popular items, along with the BeefyChanga – a chimichanga made with brisket and smoked mac ‘n’ cheese. I stuff as much as I can inside a 9-inch tortilla, fry it and then top it with smoked queso and pit beans.

Why did you start smoking more than meat? When we opened the brick-and-mortar location, we gained a following of locals who eat with us regularly – some eat with us every day. I wanted to keep things fresh for my customers and for myself. Once I gain people’s trust, they’re willing to give anything a shot.

Big D’s BBQ has won the Best of Branson award in the barbecue category three years in a row. What’s your secret? We have won every year that we’ve been in business. I think people really pay attention to the fact that we don’t cut corners. We buy the highest-quality ingredients and smoke our meats completely. People love the authenticity of what we do. [Having entered the restaurant industry later in life,] I think I go about things in a different way. I just bring real barbecue to the public. In the future, I would love to see more chef-driven restaurants in Branson – places run by people who have a passion for what they cook rather than an investment in a business.

In 2020, we also won best burgers. That was big because there are a ton of good burger places in town. For our burgers, we smoke ground brisket in pecan wood, and we incorporate those burgers into off-menu specials and crazy stacked burgers.

How has business been during the pandemic? We have actually had a fantastic year. All of our corporate catering went away and the busloads of visitors went away, but retail went crazy. In October 2019, we opened a satellite location of Big D’s BBQ inside the Price Chopper on State Highway 76, serving our food out of their deli, and when we temporarily closed the brick-and-mortar location during the first wave of the pandemic, we maintained that location because grocery stores are essential businesses. That was a huge blessing.

When you’re craving something other than barbecue, where do you eat in Branson? India Clay Oven, Branson’s Center Stage and Botanas Premier Mexican.

Big D’s BBQ at 1550 State Highway 248 is currently open Monday through Saturday from 11am to 8pm for dine-in, curbside pickup and delivery.