You are the owner of this article.
Edit Article Add New Article
You have permission to edit this article.
Edit
The Magazine
St. Louis
Kansas City
Springfield
Columbia
Other Cities
Recipes
Events
Feast TV
Promotions
Newsletters
Share This
1 of 3 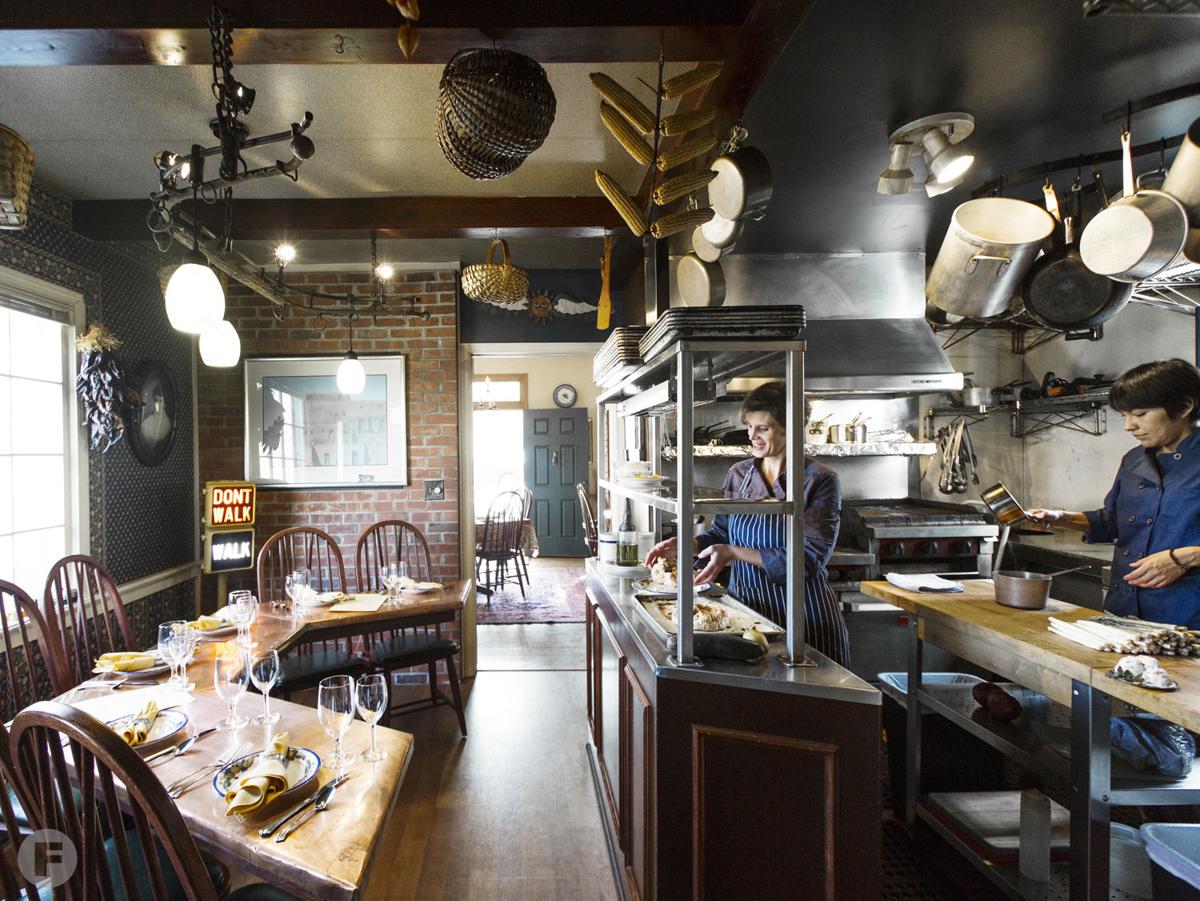 Chef Liz Huff in the kitchen at Catalpa. 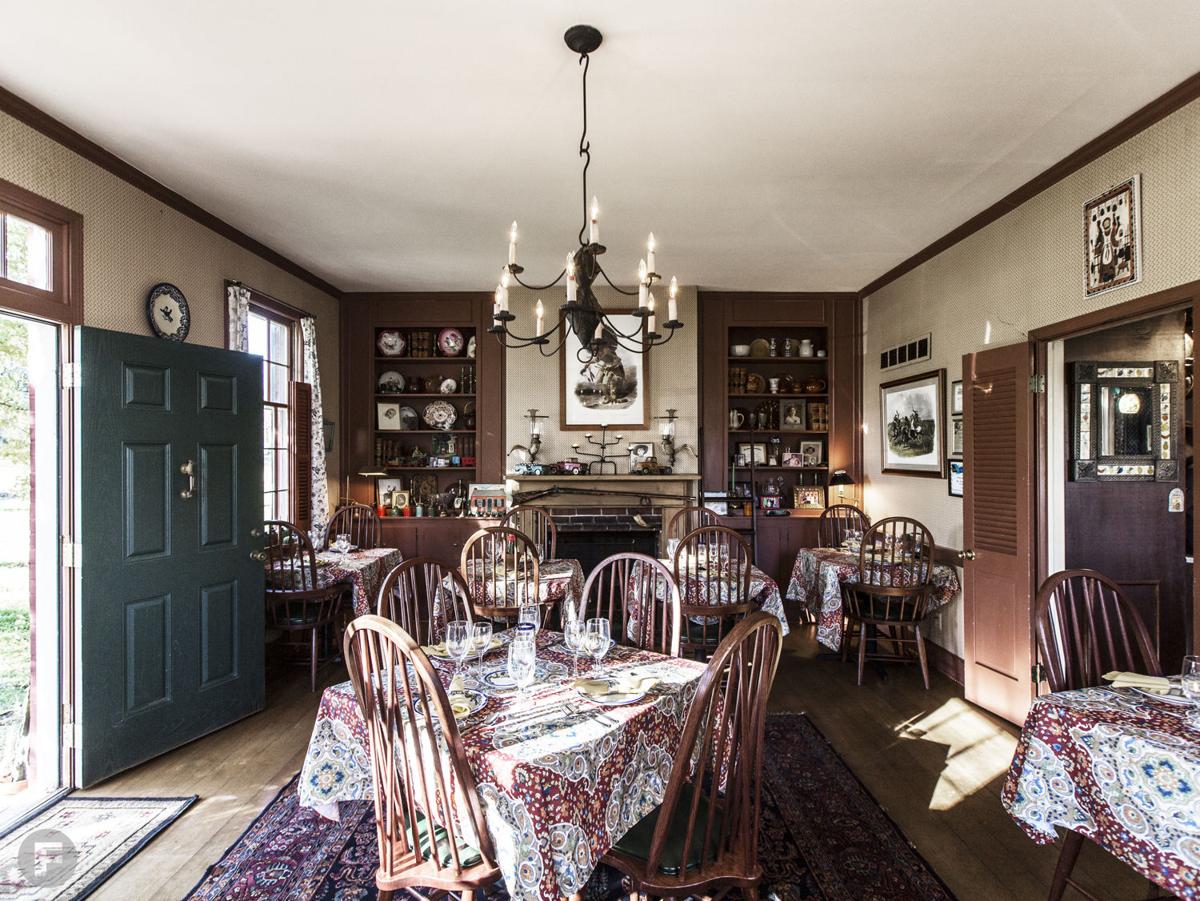 Catalpa is known for its intimate, almost homey atmosphere and size. 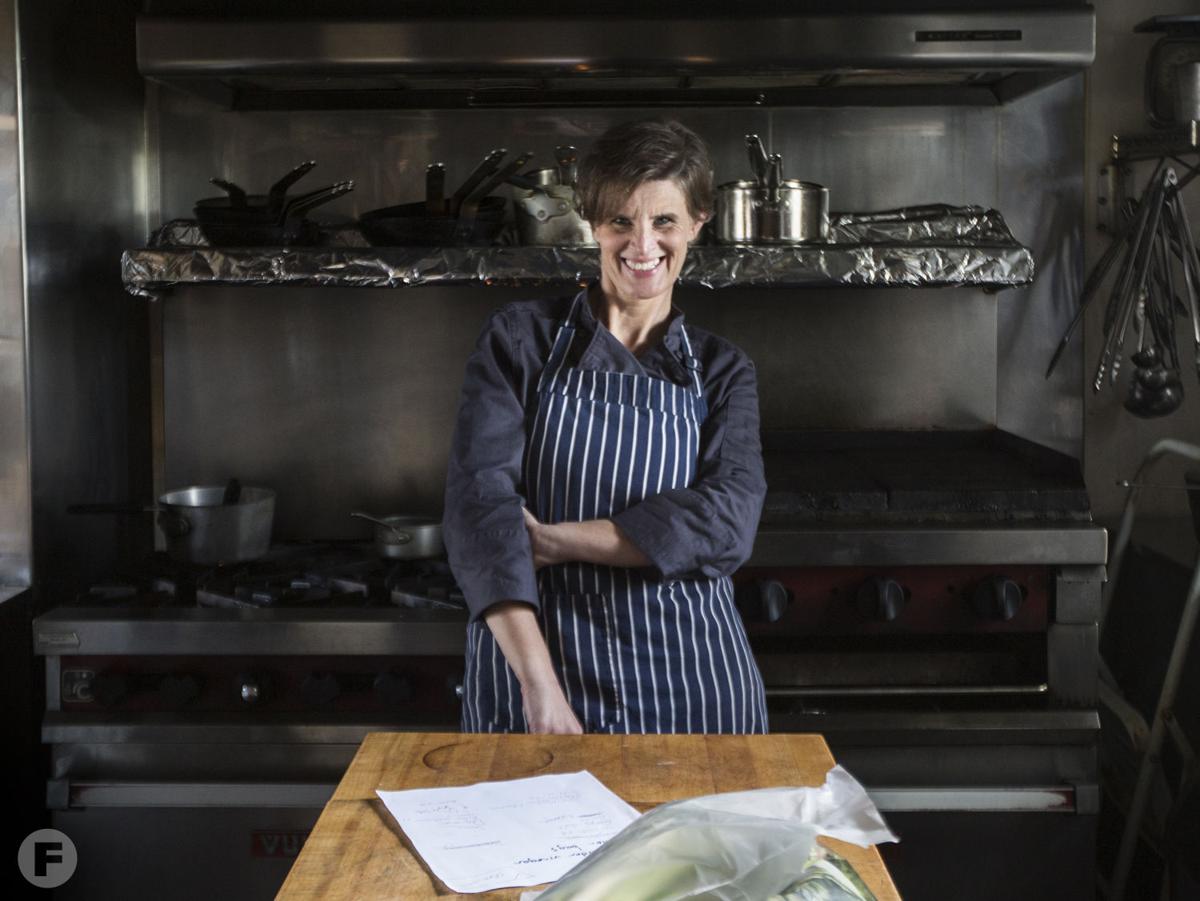 Chef Liz Huff is transforming Catalpa from a fine-dining restaurant into a burger joint.

Chef Liz Huff in the kitchen at Catalpa.

Catalpa is known for its intimate, almost homey atmosphere and size.

Chef Liz Huff is transforming Catalpa from a fine-dining restaurant into a burger joint.

Liz Huff’s culinary career has taken her from a butcher counter in Boston – the shop where Julia Child routinely called in her orders, no less – to cooking in the Virgin Islands. For almost a decade, though, her true passion has been serving seasonally inspired meals at her cozy fine-dining restaurant, Catalpa, in the tiny town of Arrow Rock, Missouri.

The restaurant is a community favorite in Arrow Rock, which is situated about 45 minutes from Columbia and claims just 56 residents, yet its reach extends much farther due to the historic local Lyceum Theater. During the theater’s peak season, people from across the state and region visit the small town, and in turn, have over the years become loyal Catalpa fans.

Overnight and almost without warning, the COVID-19 virus killed Huff’s business, and not just due to temporary shelter-in-place orders.

Huff is aware that on May 4, Missouri Governor Mike Parson allowed businesses like hers to reopen, but for the chef, it wasn’t a realistic option. The very things that add to Catalpa’s charm – its intimate, almost homey atmosphere and size, its vibrant chef’s table, where diners huddle close together to watch magic unfold in her kitchen – are now elements of the business that just no longer feel safe or responsible. No one can assure Huff that this reality will change soon, and so it’s not a risk she’s willing to take at Catalpa.

How Chef Liz Huff Put Catalpa on the Map

“I was pretty despondent when this whole thing started; I just lost my breath for a minute, cried for about a week and canceled all my spring cooking classes and stuff,” Huff says. “And then I woke up one morning and I was like, ‘You either give up and crawl into a corner with your tail between your legs, or you reinvent yourself and you move on.’”

Huff isn’t alone in grieving what’s been lost in the restaurant industry during the pandemic. Across the globe, restaurant owners like Huff are having to reckon with how their businesses will function in a world where people are increasingly reluctant to dine elbow to elbow at a bar or even five feet apart from the next table. There isn’t much time to mourn, though; like Huff, chefs are having to reinvent their life’s work as the industry is shifting underneath them.

“I really don't see going back to a small little bitty dining room where I pack people in like New York City, shoulder to shoulder, which is what I had to do to make it feasible with my method of service and everything,” Huff says. “So I decided just to completely reinvent myself.”

On a recent Monday afternoon, Catalpa’s reinvention took the form of scratch-made burger buns, R&D for Huff’s new concept: Catalpa Burger & Frozen Cocktail Joint. Watching the burger buns rise in the oven, she questions whether she’ll cut them into square or diamond shapes for her new range of burgers. She’s taking the same approach she always has at Catalpa, sourcing ingredients seasonally and locally and making almost every last thing from scratch. The only exception this time around, she says, are potato chips.

When the concept debuts on June 1, diners can expect menu items such as a Hatch green chile cheeseburger; turkey, chicken or salmon burgers piled high with cucumber, red onion and spinach with a prickly pear sauce; and sides such as bacon-basil potato salad; marinated garbanzo salad with black beans; and a fresh pickled cucumber and watermelon salad with Chimayó red chiles and picked onions. The menu, which is designed to be travel-friendly, will be available for curbside pickup.

Many of the dishes feature a New Mexico influence, such as the green chile cheeseburger, a reflection of Huff’s college years in Santa Fe, where she’s returned many times over the years. Huff will offer several different preparations for her sandwiches and burgers so customers can mix and match them with four proteins – beef, chicken, salmon and turkey – plus a veggie sandwich. “I was gonna make a veggie burger, but I think I'd rather do grilled veggie sandwiches, cause it's more colorful, happy and bright,” Huff says.

In addition to the green chile cheeseburger and prickly pear sauce preparation, Huff plans to offer preparations such as fresh ginger teriyaki with roasted onions, mushrooms and red peppers and one with roasted heirloom tomatoes, pesto mayo and white Cheddar cheese.

Those sandwiches will likely be served on those burger buns that Huff is currently perfecting, while another preparation made with grilled sweet potato, corn, peppers, onions, roasted tomato and herbs will be served on pita with a garlic-mint-cucumber sauce.

To complement her new food items, Huff is also debuting a menu of frozen cocktails and boozy shakes and sundaes. She has long made ice cream in-house at Catalpa, which she will continue to do now for both boozy and non-boozy treats. Huff says frozen cocktails will range from a Hemingway Daiquiri with fresh ginger, grapefruit and rum to a White Russian with homemade cappuccino ice cream.

She plans to serve all of her cold cocktails and confections in reusable stadium “mood” cups that change colors depending on the temperature of the contents. “They're like a light blue, but they turn dark blue when the cold stuff is in them,” Huff says. “And I’m all about the edible glitter and the homemade whipped cream for my milkshakes and all that.”

Everything on the menu costs $12 or less, by design, as Huff hopes to attract both local customers as well as folks passing through on summer vacations. Given how the pandemic has limited travel so far and with the understanding that people may not risk visiting densely populated areas this summer, Huff hopes to serve campers and those visiting state parks. (The town of Arrow Rock, itself, is a state historic site.)

The historic tavern is recovering from a fire, but it will come back fresh and ready to continue serving customers.

“They can come get a brown bag green chile cheeseburger and a frozen cocktail, sit at a picnic table and go up to the park and enjoy a nice meal,” Huff says. “That's the way my life is changed, and almost overnight, like everybody else; it's not something that you have time to sit and ponder over. We're just going to jump in and do it.”

Survival and finding new purpose out of tragedy is well-trodden territory for Huff. In her early 20s, the chef survived a devastating car accident that left her with punctured lungs, broken knees and arms and 12 broken ribs. In her early days as a restaurant owner, she struggled with addiction and lived through some extremely tough times before getting sober 14 years ago. Then, in 2012, after overcoming everything that life had thrown at her so far, Huff had to have a 7-pound tumor removed, which fortunately was benign.

Huff is a fighter, and she’s not giving up her passion – Catalpa, forged by and through so much pain and adversity, but also love and fierce resilience – without a fight.

“I just wasn't willing to lose my business,” Huff says. “And if I can make a living doing green chile cheeseburgers and boozy milkshakes and frozen Hemingway Daiquiris, then I think I like that. I'm smiling sitting here talking about it and that's such a shift from a few weeks ago when I was hyperventilating in the corner. I just want to keep going.”