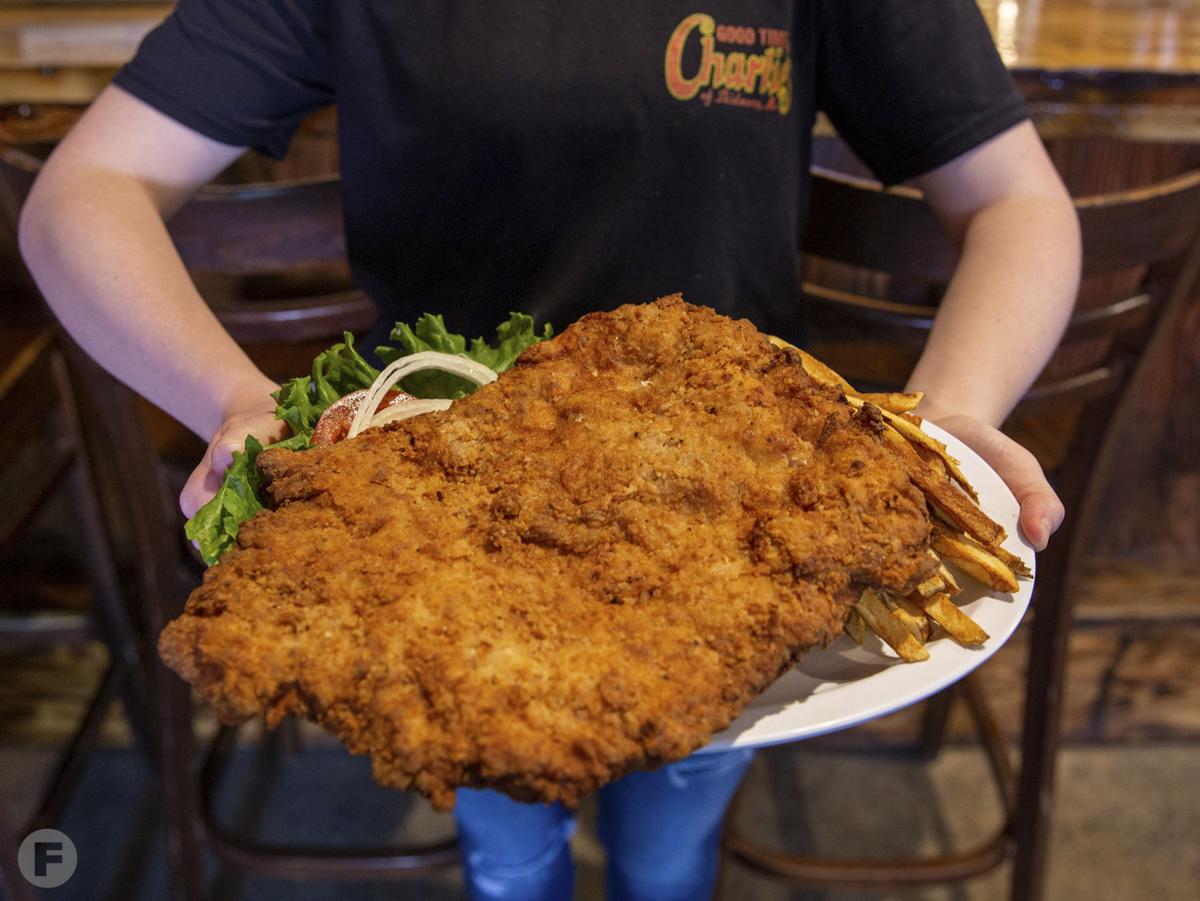 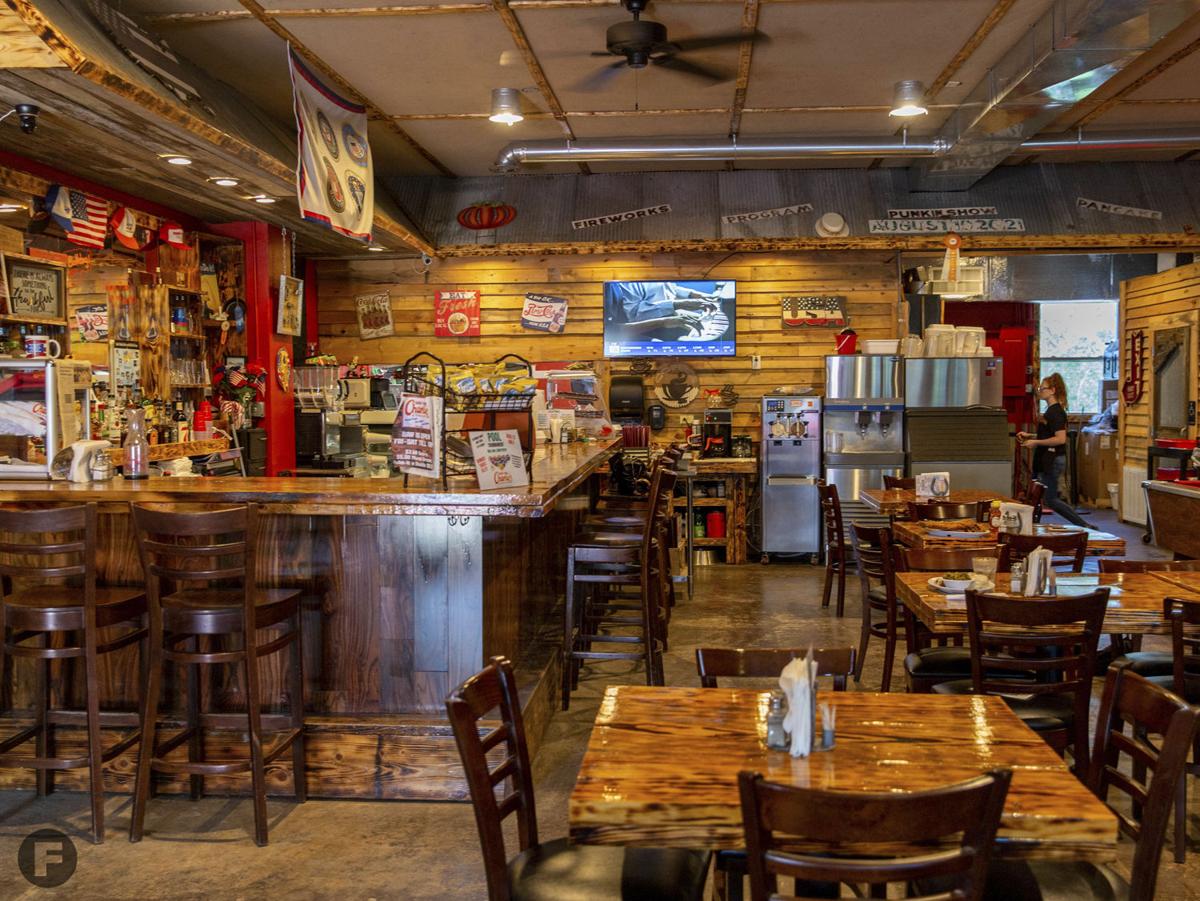 Good Time Charlie's of Skidmore is located in the building where Ken McElroy was gunned down. 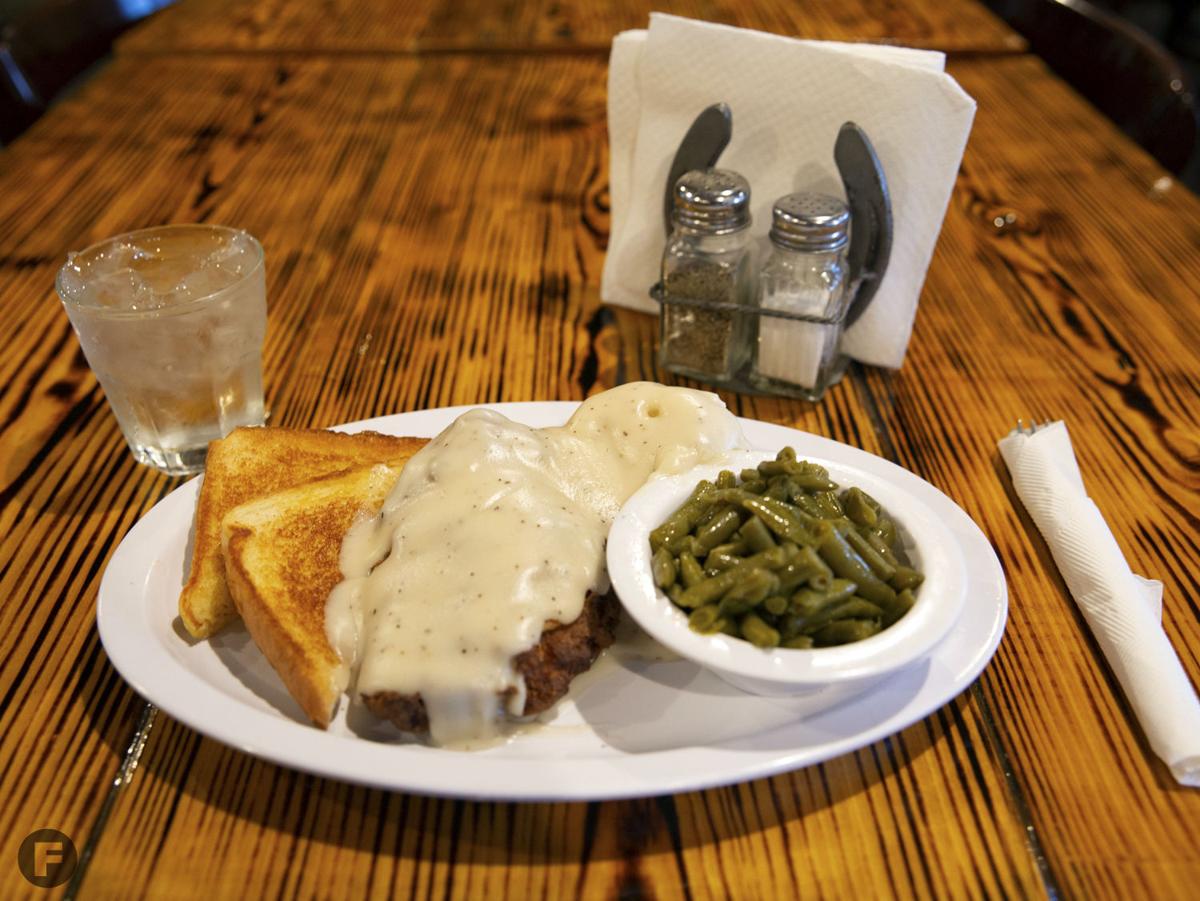 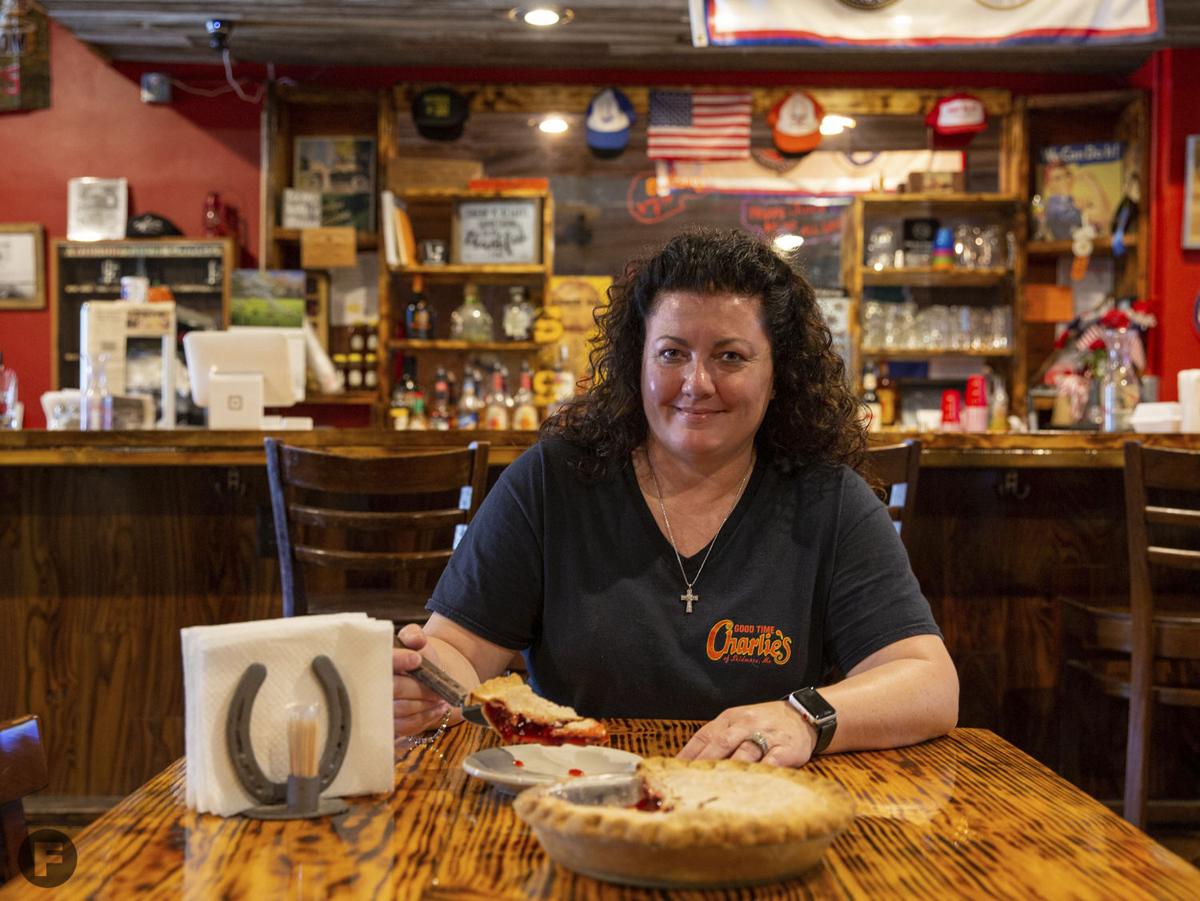 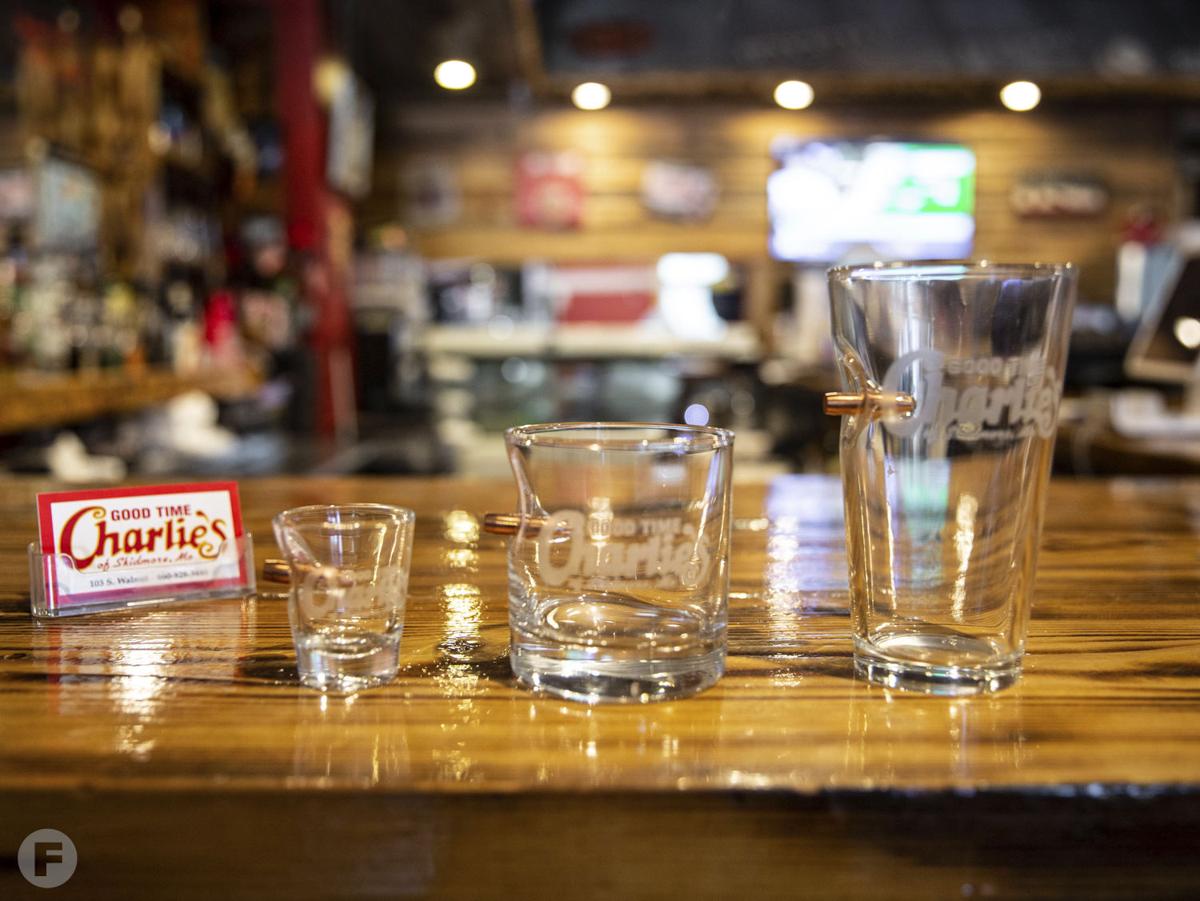 The restaurant sells bullet-ridden shot and tumbler glasses as souvenirs. 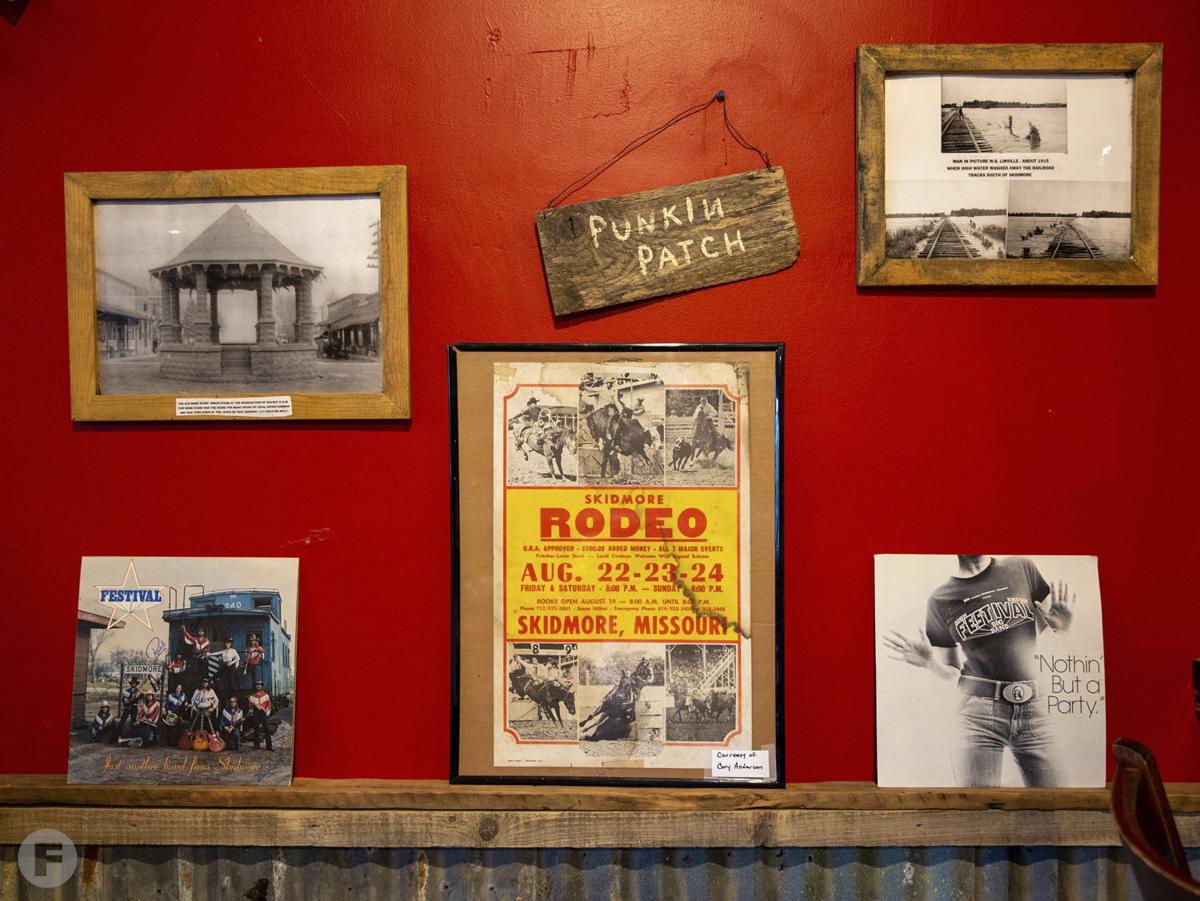 Much of the decor inside has been donated.

Good Time Charlie's of Skidmore is located in the building where Ken McElroy was gunned down.

The restaurant sells bullet-ridden shot and tumbler glasses as souvenirs.

Much of the decor inside has been donated.

Good Time Charlie's, the only café in downtown Skidmore, serves fare fit for a farmer, like haystack mounds of mashed potatoes and gravy, or pork tenderloins that barely fit on the platter. There are down-home favorites like fried catfish, fried chicken and hand-cut French fries, and housemade strawberry-rhubarb pie with fruit from local gardeners. Folks come from all around the Nodaway County and beyond for the hearty meals. The food is a draw, of course, but so is the restaurant’s setting: right in the heart of Skidmore, Missouri, in the building where the town bully shot the local grocery store owner some 30 years earlier.

Skidmore struck fame in the '80s when Ken McElroy was gunned down on Main Street in broad daylight in front of dozens of witnesses. But despite an FBI investigation, no one ever pointed a finger at the killer. The man had terrorized the town for years, the local police force never did anything about it, and most people felt he had it coming. Thirty years later, the murder is still unresolved. Residents want to keep it that way and just move on.

“We don’t talk about the past here,” says owner Sandy Wright (also the former mayor and a current city council member and president of the local community betterment club), though her bullet-ridden shot and tumbler glasses are a popular souvenir. The business is a triumph in a town where, for many years, the only place to get a cup of coffee was the fertilizer store. Skidmore, population 284, isn’t exactly booming. But a year and a half after opening, the restaurant still thrives.

Skidmore has… a lot of history. What has opening a restaurant here meant for the community? My plan was to open a restaurant as opposed to a bar. I wanted a family atmosphere where people felt comfortable enough to bring their kids in and my church crowd would come to. I believe we’ve accomplished that and we’ve had great support. We’re getting customers in from surrounding communities, including St. Joseph and Kansas City, and we get quite a few hunters in when they’re in town. I have provided jobs for our community, and various clubs and organizations use the restaurant as a gathering place for their meetings.

Do people still come in asking about Ken McElroy? Oh yeah. People want to know where he died or if this is where the grocer got shot. And I say, “Yes.” It did happen here. We’ve had two documentary film crews from California who were filming for the past year and a half. I find it amazing people are still fascinated by this story. I’ve actually met a truck driver who detoured from his route to come through town with the book In Broad Daylight [the 1988 true crime book about McElroy's murder]. He asked me, “Is this where it happened?” We have customers who take day trips to come to Skidmore just to see where everything happened. On one hand, curiosity about the past does bring customers to our town and restaurant. However, as [someone] who grew up here during the time all [that] occurred, I wish we could move past all the negative things and focus on the good we are trying to accomplish in our community.

Let’s talk about your menu. It’s home-cooked food. I wanted everything made fresh and prepared here at the restaurant. We do our mashed potatoes from real potatoes with the peels still in ‘em. Tenderloins are by far our best-seller. People come in because they see other people posting about them on Facebook with pictures and so they want to try it. All our meat is tenderized, hand breaded and prepared here – tenderloins, chicken fried steak, chicken fried chicken and chicken tenders. We hand-cut our steaks and burgers are hand-pattied. We feature homemade fruit pies, cakes and cinnamon rolls for desserts.

How has the restaurant affected community morale? I have people tell me all the time [that] they’re so happy to see a business and traffic back in Skidmore. If you come to town on a Friday or Saturday night there are cars lining the streets all the way down the hill. I’ve really tried to provide a place in the community where everyone feels comfortable. A lot of the local kids and teenagers come in to play pool and just hang out. There’s not many places around here for the kids to go to, so I’m happy to provide a safe environment for them. Some of the decor in Good Time Charlie’s has been loaned or donated to me by local people who had items pertaining to businesses or events that occurred in Skidmore. Favorites include pictures and albums from Skidmore’s local band, The Festival Family, and pictures loaned by our museum of local businesses and of our annual festival, the Punkin Show.

Plus, you deliver! We do. We cover the Skidmore, Maitland and Graham areas, including the rock quarries and [people] just outside of town. Being in an agricultural community, our farmers spend a lot of time either planting or harvesting, so we’ll take it out to ‘em if they call. The same with the rock quarry guys. They’re driving trucks constantly, so we’ll go and drop off lunch. There’s no Uber – just Sandy and her truck. That’s me.

Why is revitalization so important to you? I grew up here and I remember how it used to be. I hate the deterioration we’re seeing in the majority of our small towns, and I feel the need to try and do my part to improve my community.  As soon as I graduated from high school I went to college, then joined the military. I was gone for 28 years and moved back because my mother is still here. I’ve learned you have to bloom where you’re planted and anyone can make a difference if you just get out there and do it. Lead by example.