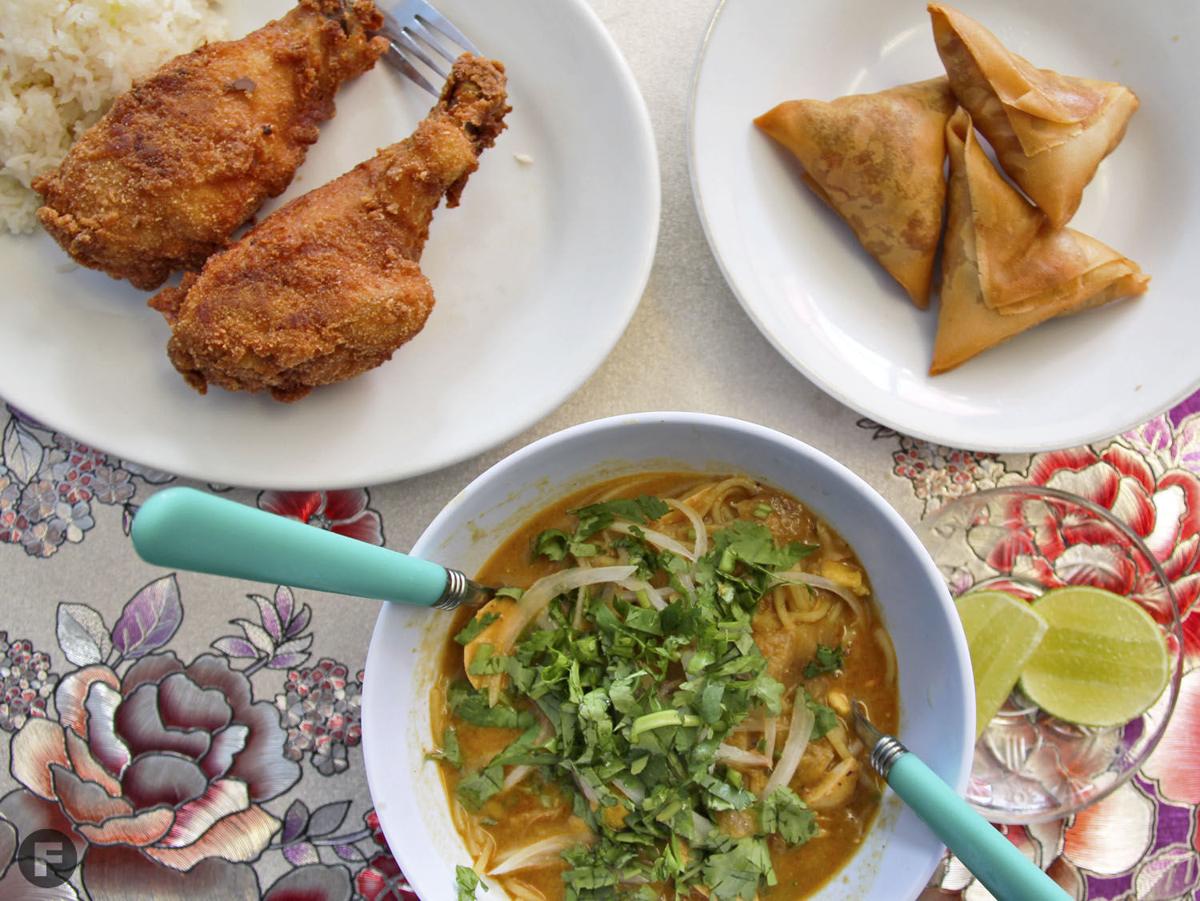 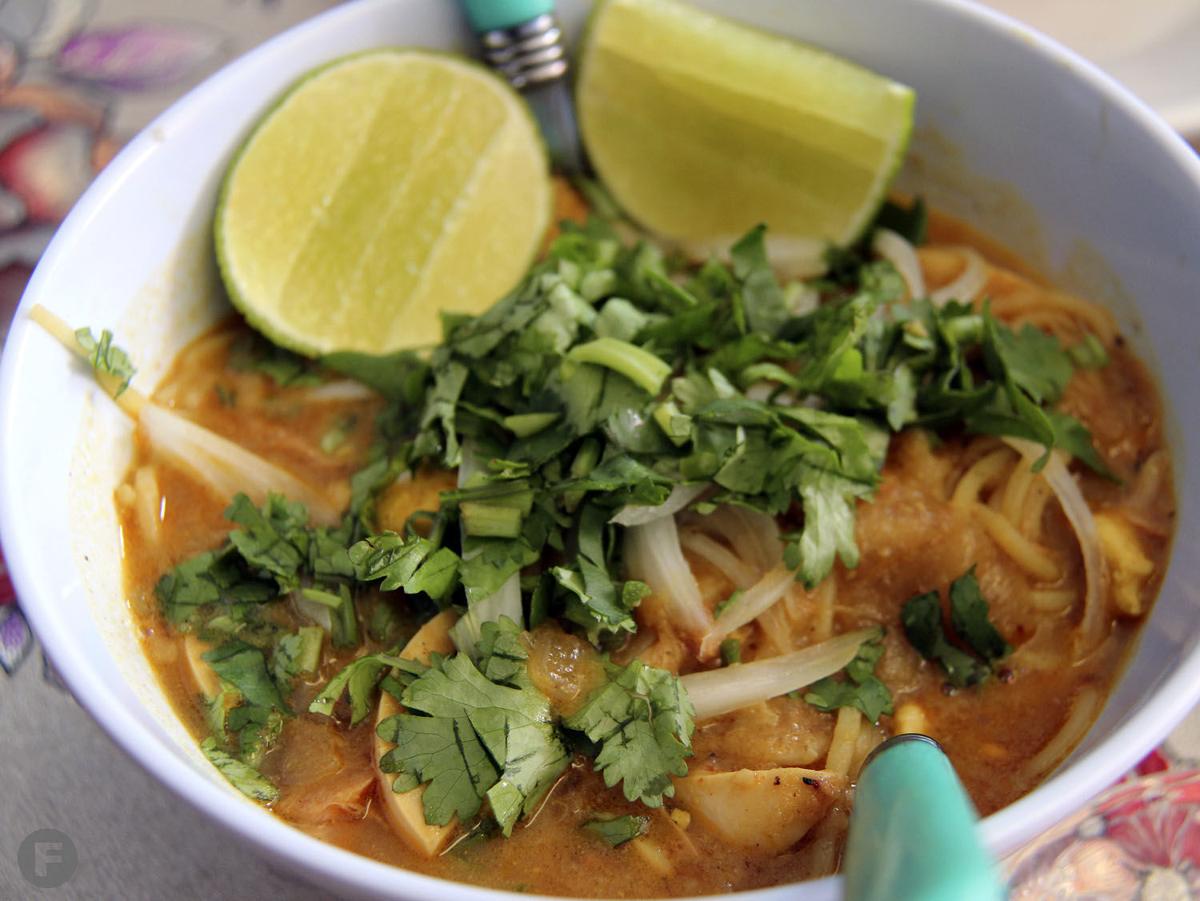 The flavorful coconut curry soup is spiced with turmeric, fresh garlic and onion. 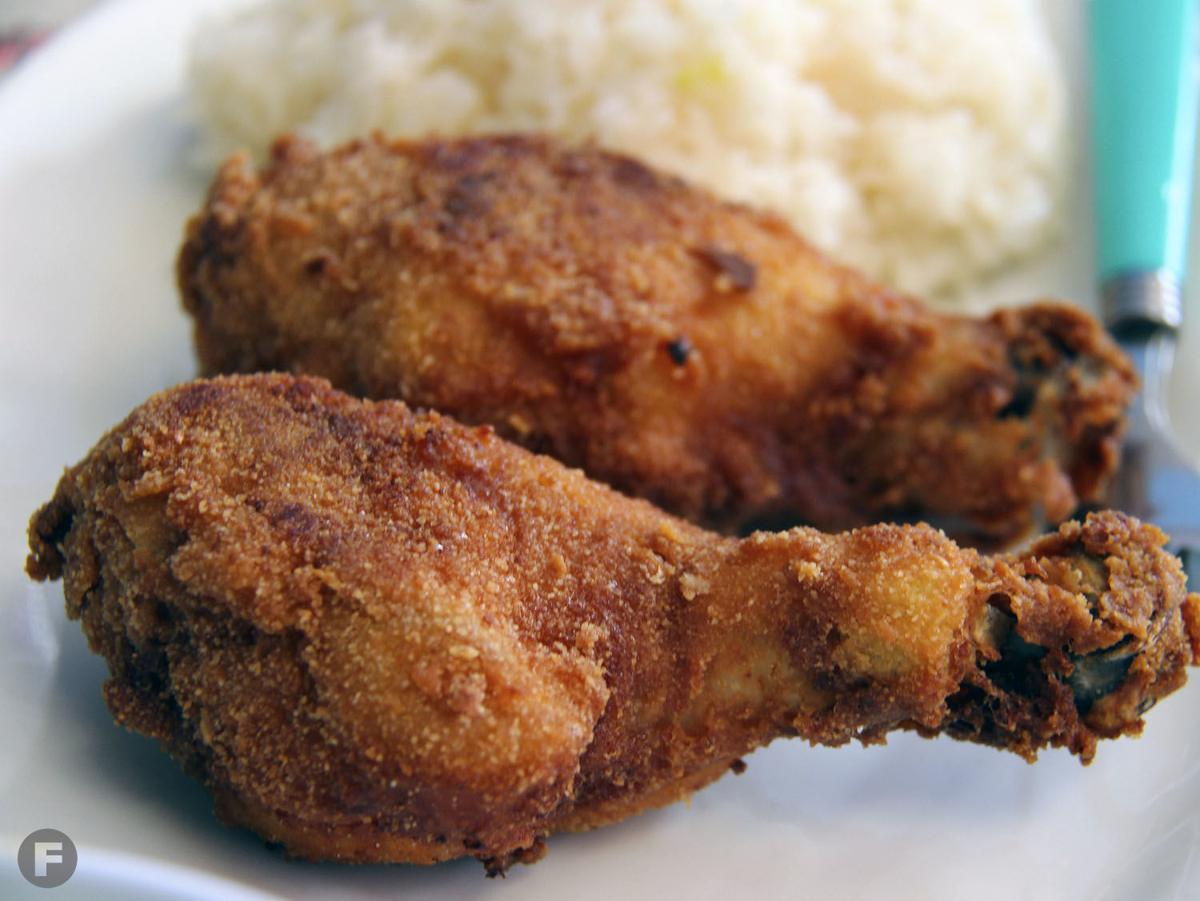 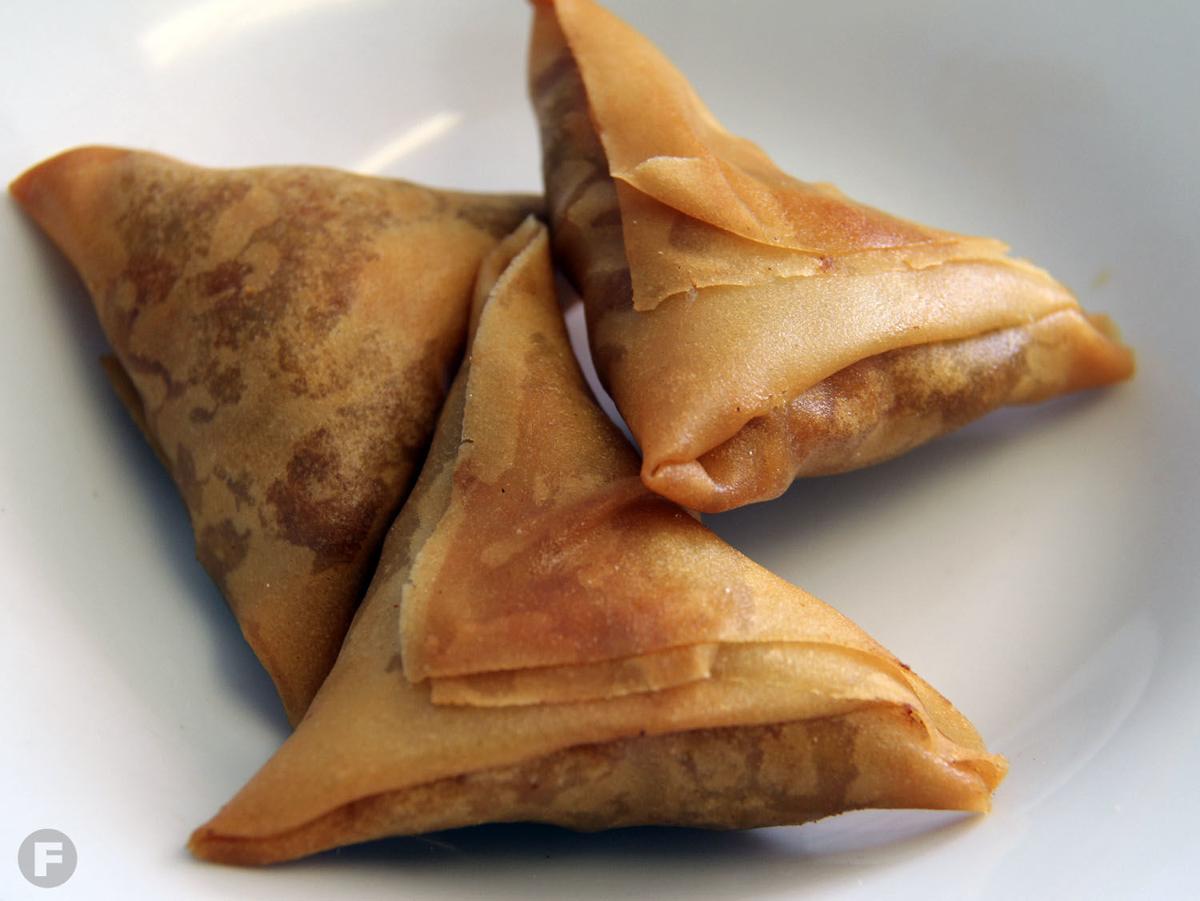 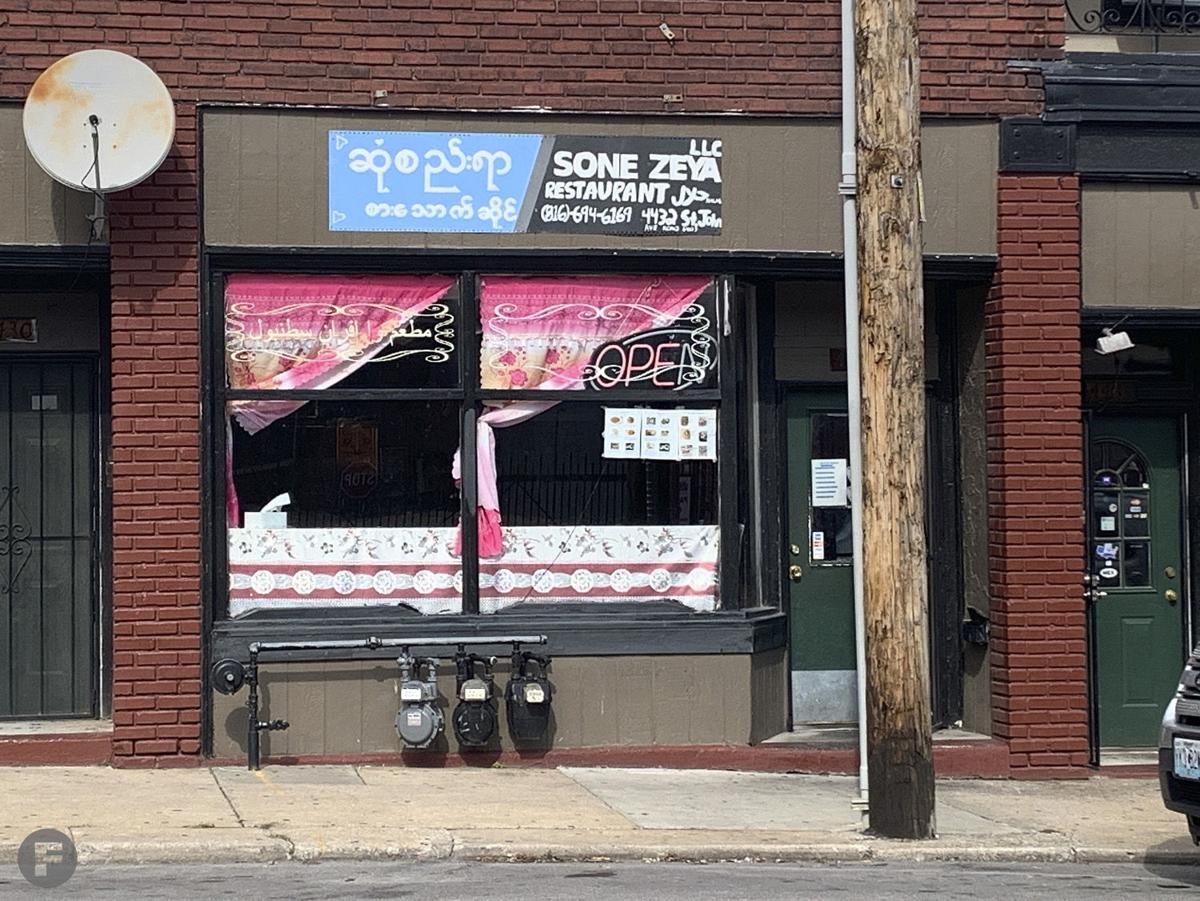 Sone Ze Ya is a modest restaurant located on St. John in the historic Northeast. 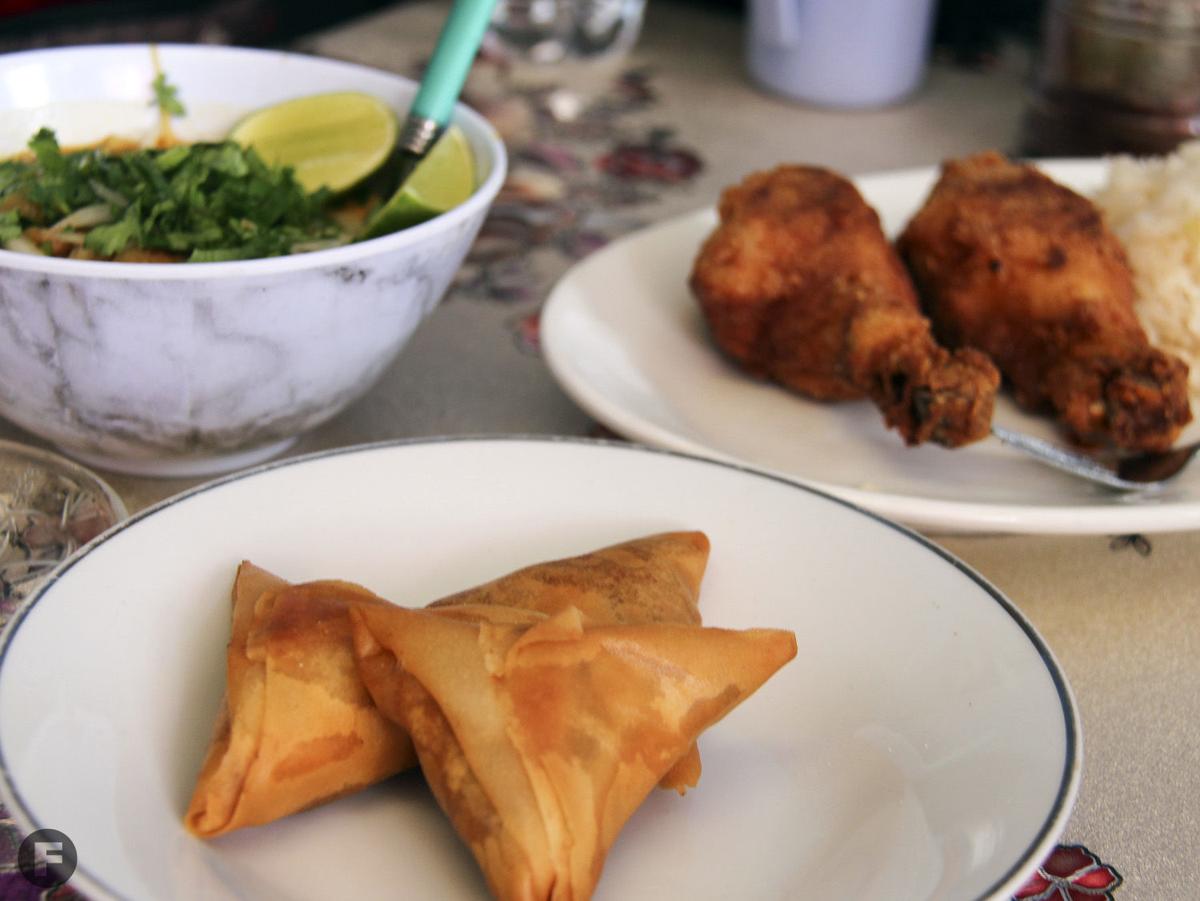 The dishes are all made with fresh produce grown locally by the owners' family. 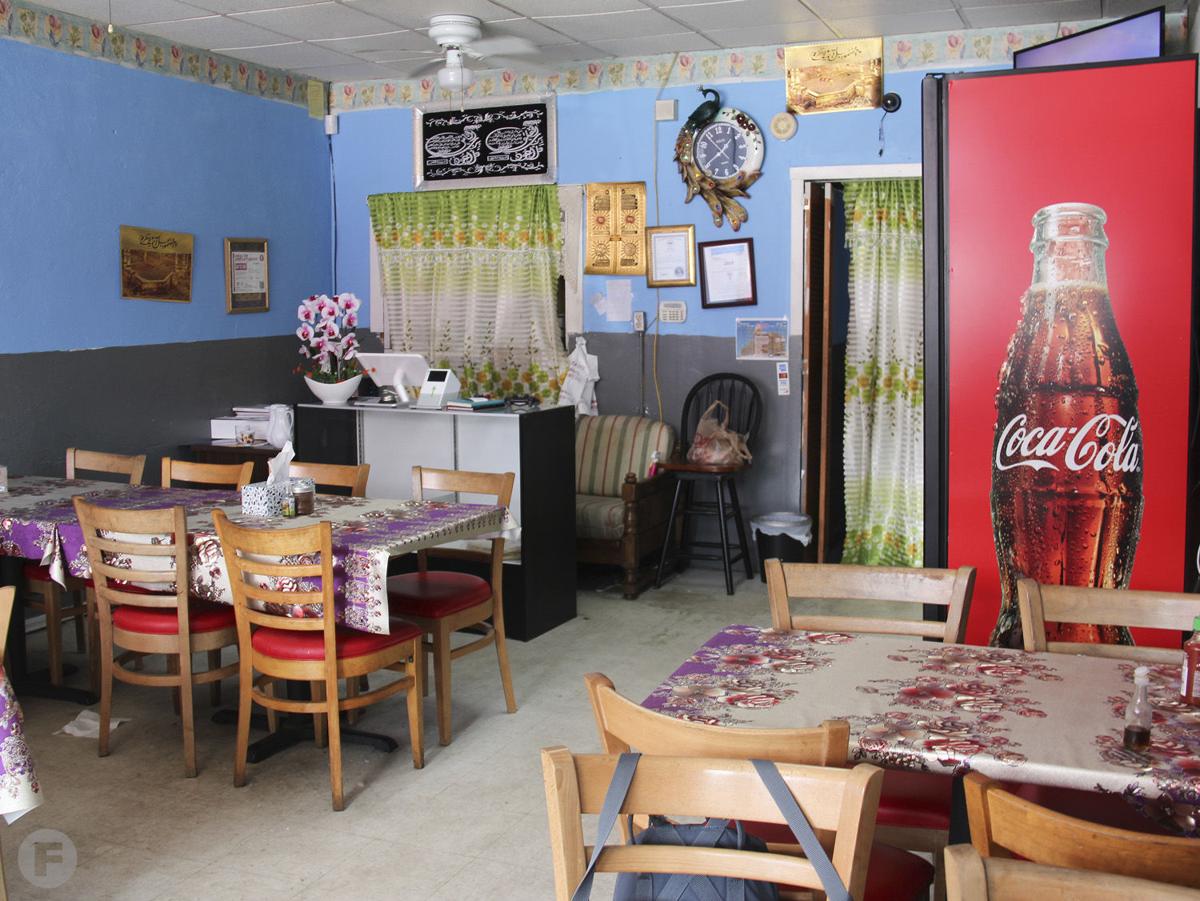 Inside, the restaurant features a handful of tables adorned with embroidered tablecloths.

The flavorful coconut curry soup is spiced with turmeric, fresh garlic and onion.

Sone Ze Ya is a modest restaurant located on St. John in the historic Northeast.

The dishes are all made with fresh produce grown locally by the owners' family.

Inside, the restaurant features a handful of tables adorned with embroidered tablecloths.

Graduates of the celebrated New Roots for Refugees farming and entrepreneurship program, entrepreneurs Swa Dit and Mee Nge have expanded beyond farming and have moved into the kitchen. Their four-month-old Burmese restaurant, Sone Ze Ya, located in Kansas City’s Historic Northeast, is bringing Kansas Citians a rare treat: traditional Burmese comforts.

The pair originally came to the United States several years ago as Rohingya refugees. Like over a million other ethnic Rohingya, they were forced fee their home in Burma due to relentless persecution of their ethnic group by the Myanmar government (a little clarification on names: the military-led government changed the country’s name to Myanmar in 1989; the United States does not recognize that name and still officially calls the country Burma). The family settled in the Kansas City area, along with dozens of other refugees from the area. They later entered the four-year New Roots for Refugees program, where they learned about local horticulture and received coaching in running a business in the U.S. The efforts over many years have paid off.

Sone Ze Ya is a modest restaurant located on St. John in the historic Northeast, just north of Independence Avenue’s beloved strip of taquerias. Customers are encouraged to seat themselves at a handful of tables adorned with embroidered tablecloths, or at a small bar that faces out on to the street. Guests are presented with both a comprehensive text menu as well as a menu that features pictures of each item.

Although Burmese food is not commonly found in Kansas City, Burmese grocery stores have for several years been popping up in Kansas City, Kansas, and along Independence Avenue in Kansas City, Missouri. And though it may be less common to find here, Burmese cuisine may actually be more familiar to Western palates than many diners may expect. At Sone Ze Ya, diners can opt for a flavorful coconut curry soup, spiced with turmeric, fresh garlic and onion, as well as a spicy, fresh papaya salad. Must-trys here are the potato curry-stuffed sambusas (similar to samosas but made with a thinner, phyllo-like pastry), as well as the crispy fried chicken with sticky rice (this chicken can hold its own against any restaurant in the city at about a third of the price). Guests here can also enjoy mohinga, a rice noodle soup made with lemongrass and fish broth, that is considered by many to be Burma’s national dish.

The dishes are all made with fresh produce, including bean sprouts, cilantro, onions, garlic, potatoes and herbs, all grown locally by Swa Dit and Mee Nge’s family in Kansas City, Kansas. With the most expensive item on the menu at $8 as well, it is hard to find fresher, more delicious home cooking anywhere in town at a more affordable price. Whether you are familiar with Burmese cuisine, or if it might be your first time trying it, you’re unlikely to leave disappointed.

Sone Ze Ya is open daily from 9am to 9pm.