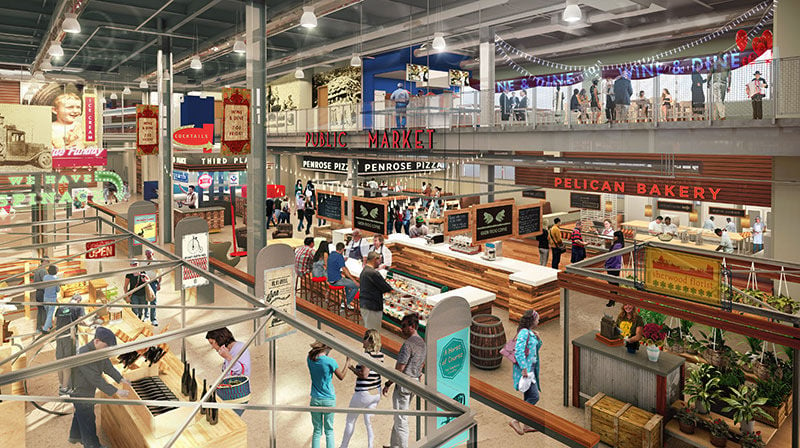 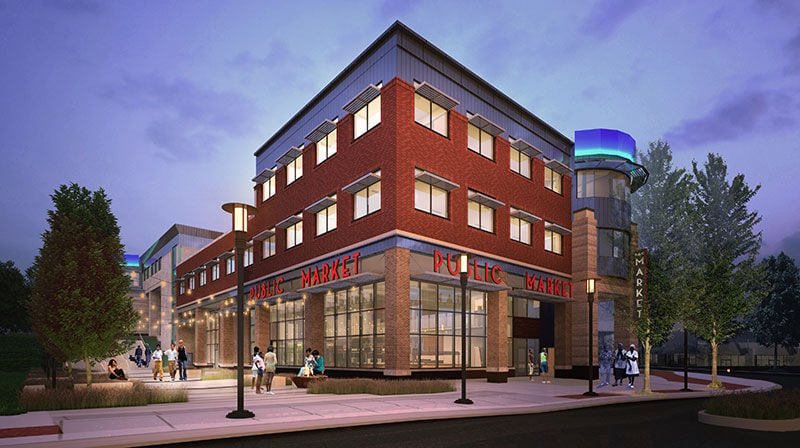 Several familiar names, along with a few new ones, made the list of vendors selected by The City of Lenexa. The city has been accepting applications since last fall, looking for the right partners to fill the 11,000-square-foot food hall. Several more tenants will be announced as soon as they are confirmed.

When filled, the Lenexa Public Market will be home to approximately 15 permanent merchants, with space available for pop-up opportunities. About 85 percent of the market will be devoted to food, beverages and restaurants, with the remaining merchants offering other handcrafted products.

The Roasterie will operate a coffee kiosk inside the food hall, offering specialty coffee and espresso drinks, teas and canned Cold Brew, along with an assortment of from-scratch baked goods. This will be the company’s sixth location in the Kansas City area.

Additionally, the City of Lenexa also has letters of intent and is in lease negotiations with the following merchants:

Foo’s Fabulous Café: Betty Bremser and Jeff Stottle, who own Foo’s Fabulous Frozen Custard in Brookside and Foo’s Fabulous Café in Leawood, respectively, are expanding with a second franchised Foo’s Fabulous Cafe inside the Lenexa Public Market. As the managing partner of Not Just Foolin', LLC, Stottle says he plans to offer an array of items from waffles and breakfast sandwiches in the morning to Foo’s popular roasted red pepper and smoked gouda cheese soup and signature sandwiches at lunch. New to the mix will be Foo’s gourmet burgers, which will be introduced at this location, and, of course, Foo's famous frozen custard.

Lenexa Locale: Matt Moore and Chancie Adams, owners of Martin City Brewing Co., are opening a full-service bar offering Kansas City-area beer, wine and craft cocktails. With two restaurants and an event space thriving in Missouri, the duo is excited to launch this new beverage-only concept while expanding their footprint into Kansas.

Topp’d Pizza + Salads: Local restaurateur and 15-year pizza business veteran Chad Talbott will serve up his signature custom-made pizzas using locally sourced and fresh ingredients at his second location of Topp’d Pizza + Salad. In addition to pizza, the menu includes fresh salads and grinder sub sandwiches, as well as a selection of small plates and appetizers. Topp’d opened its original location in 2015 on Rainbow Boulevard across from KU Medical Center in Midtown Kansas City.

“We’re thrilled to be partnering with each of these businesses,” Lenexa Public Market manager Carmen Chopp said. “The market will showcase local entrepreneurs in a dynamic way, and this is just a taste of what’s to come.”

In addition to these permanent food vendors, Chopp says the city is also exploring the idea of building out a space in the market with a full commercial kitchen that will be available for food vendors and restaurants to rent on a limited basis. This will allow new food entrepreneurs the opportunity to experience what operating in the Lenexa Public Market is like, and will also keep the food offerings exciting and constantly evolving.

“We want the market to be a place of food innovation and excitement, and by having one food service space that we can lease to various restaurants, pop-ups or food artisans to ‘try on,’ it will give our customers more selection, and provide our vendors a chance to experience what being in the market is all about,” Chopp explains.

The Lenexa Public Market will occupy the lower level of a 70,000-square-foot building that also houses Lenexa’s new city hall and a soon-to-be-announced higher-education tenant.

As part of this development, there will be a large common area and outdoor seating, with a special events space and a full demonstration kitchen as part of the Lenexa Public Market buildout. There are plans for a future outdoor farmers' market and year-round programming and performances to bring people to the market.

“The market introduces a nontraditional retail element into the City of Lenexa’s new civic campus,” said community development director Beccy Yocham. “It supports our community’s vision of creating a gathering area that integrates retail sites with activity centers and public buildings. The Lenexa Public Market demonstrates a commitment to that vision and models the mixing of uses that we expect from our private sector partners.”

When it opens mid-summer 2017, Lenexa Public Market will be the only fully-indoor public marketplace in the Kansas City area.

To learn more about renting temporary restaurant space in the Lenexa Public Market, contact Carmen Chopp at 913.477.7516 or cchopp@lenexa.com.

The drive-through will offer The Roasterie’s full line of signature coffee and espresso drinks along with grab-and-go snacks.