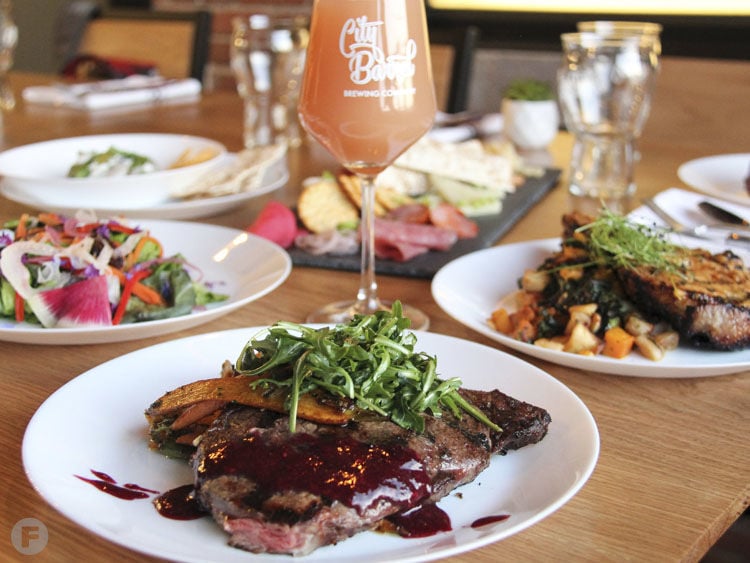 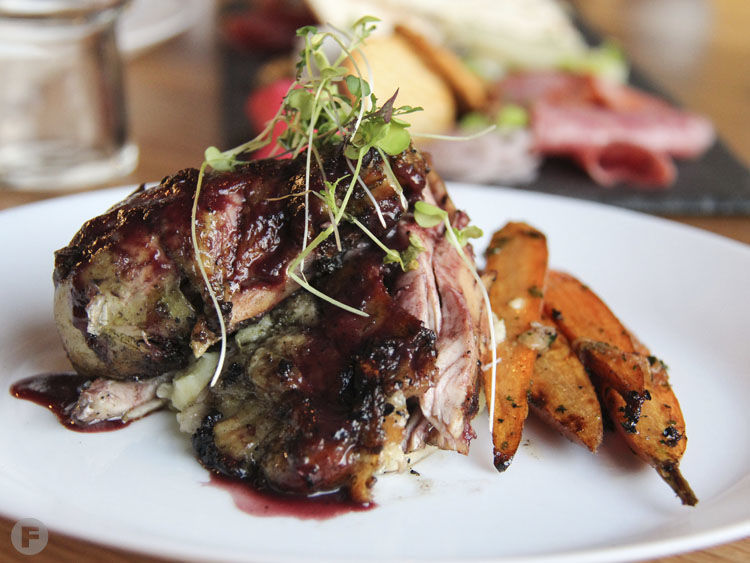 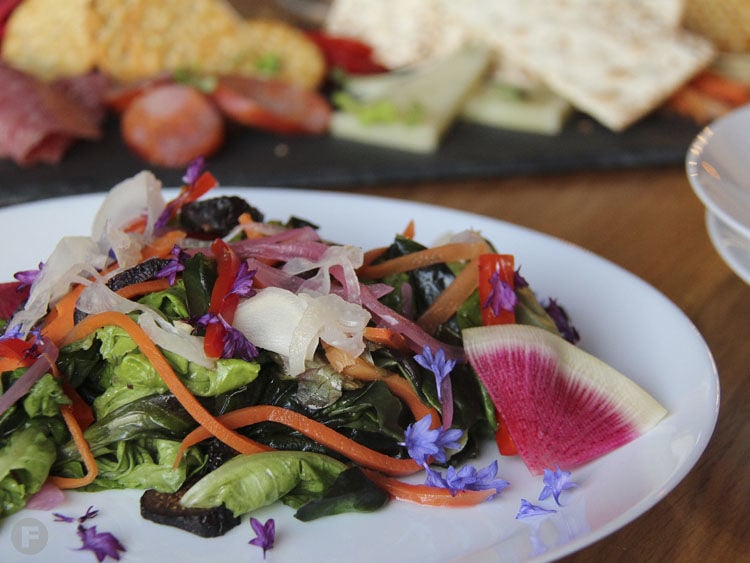 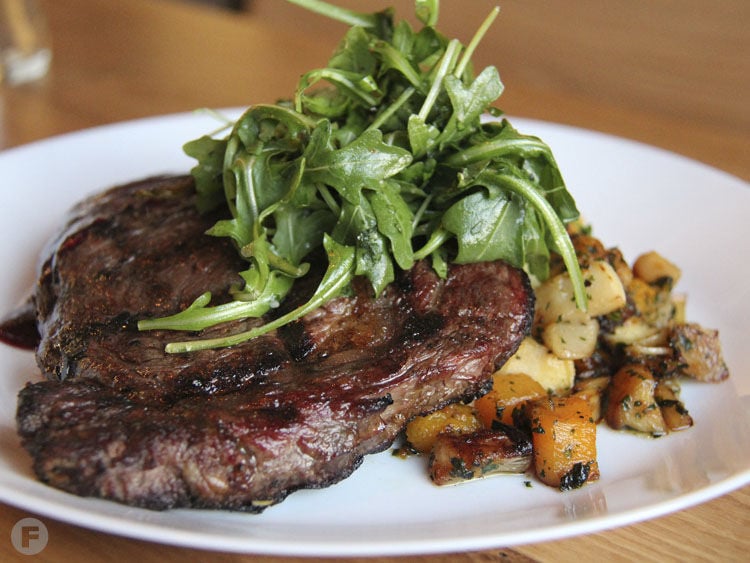 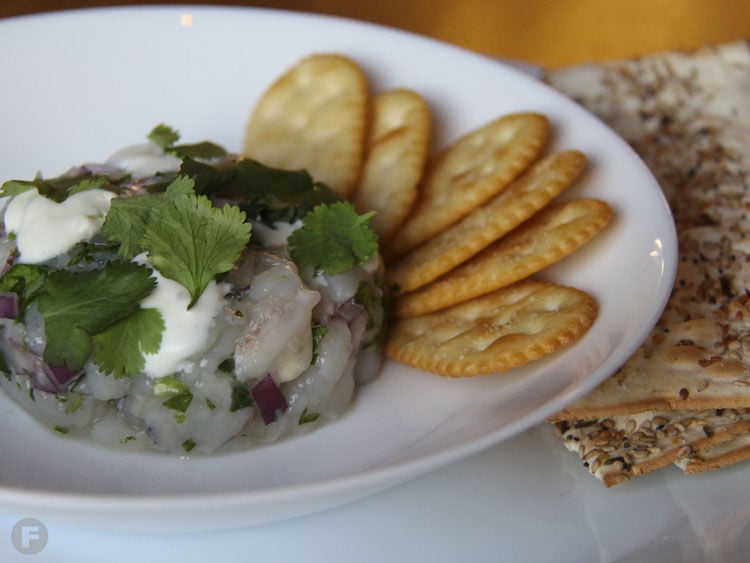 Ceviche is made with the brewer's Ahoy Sour. 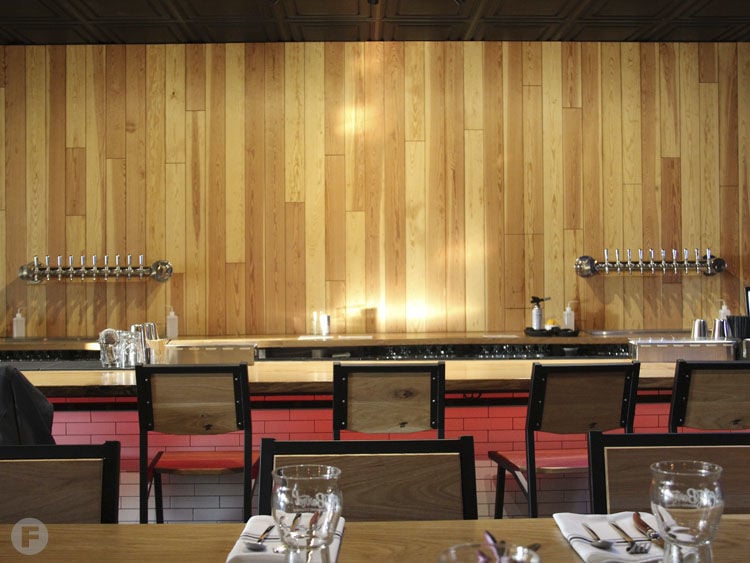 The back bar features old wood panels from the Nelson-Atkins Museum of Art. 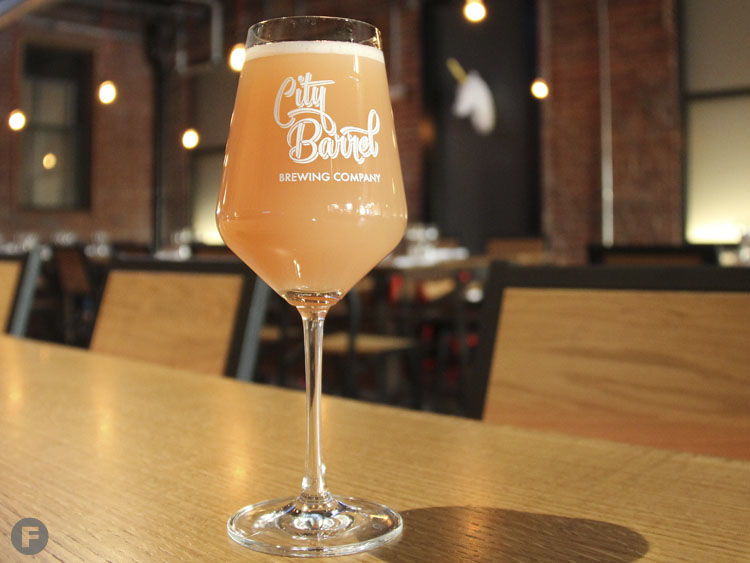 The brewery specializes in wild sours and IPAs. 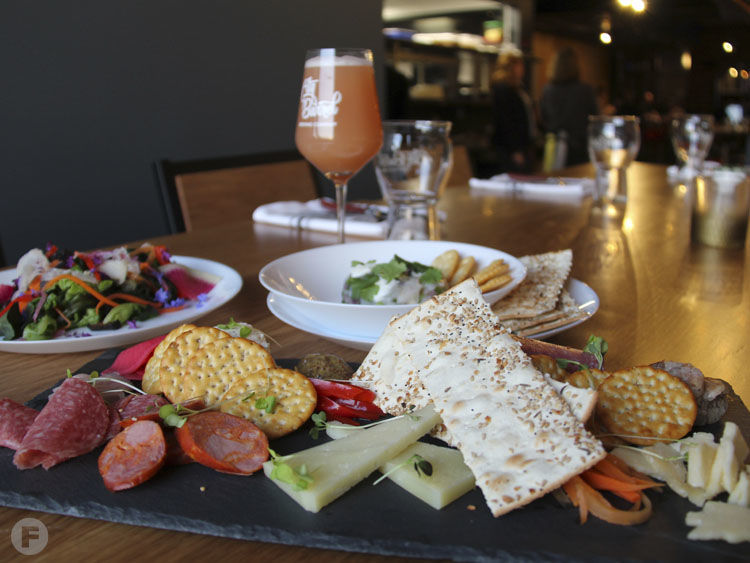 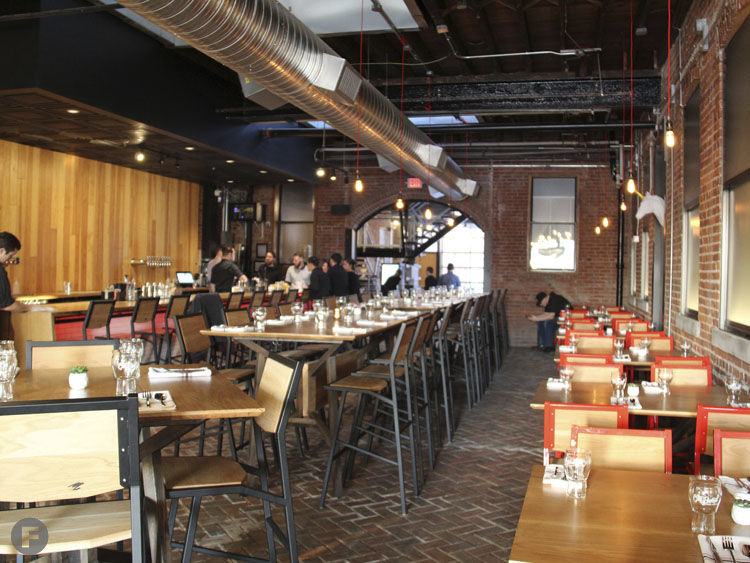 The patterned brick floor used to function as the alleyway between two buildings. 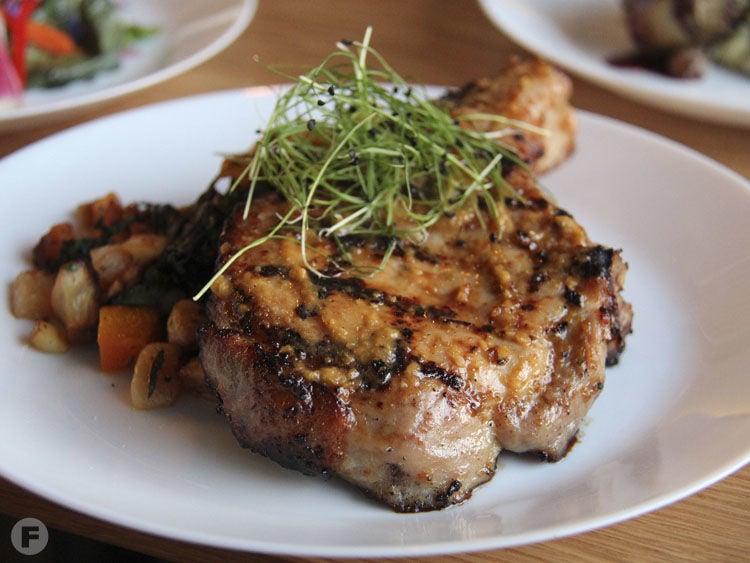 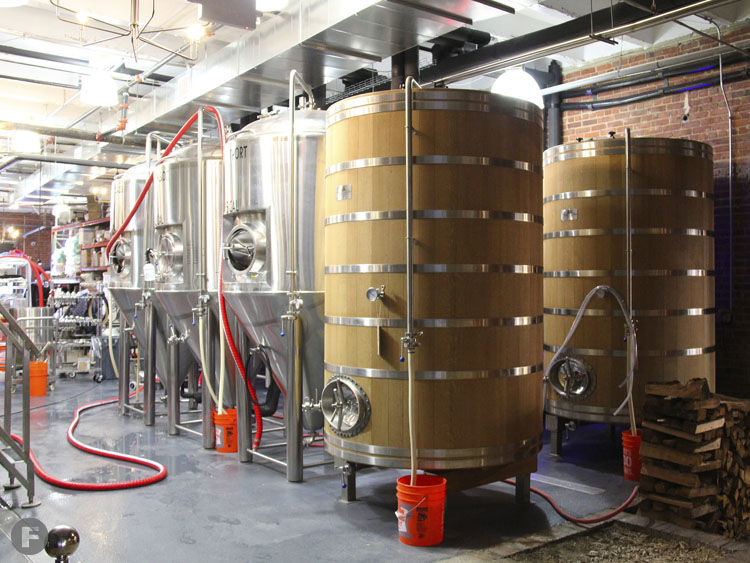 Foeders from Foeder Crafters of America in St. Louis. 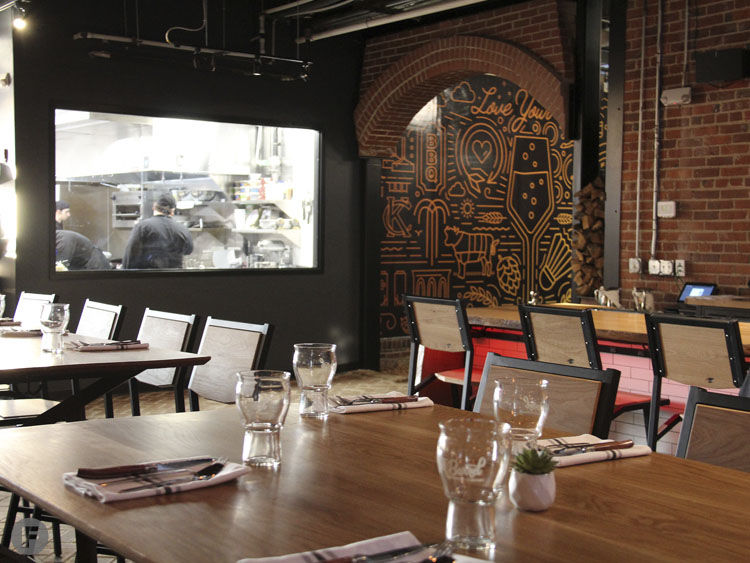 The brick walls and floors are all original to the building. 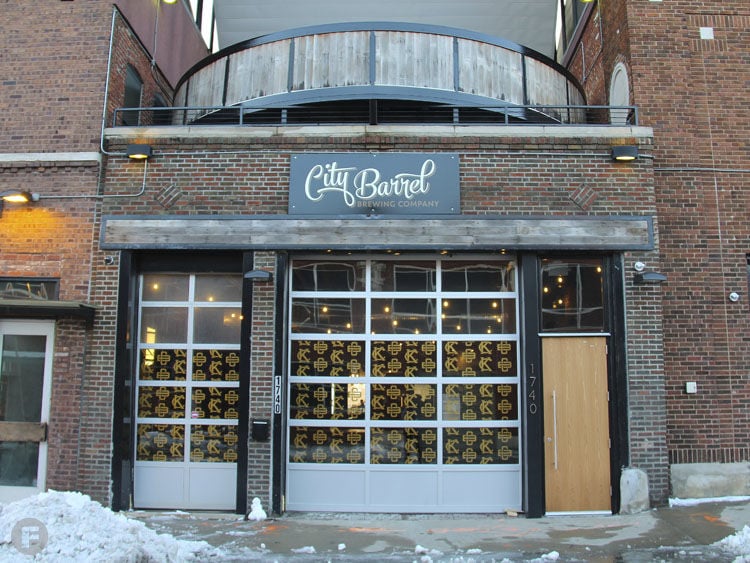 Now open in the East Crossroads.

Ceviche is made with the brewer's Ahoy Sour.

The back bar features old wood panels from the Nelson-Atkins Museum of Art.

The brewery specializes in wild sours and IPAs.

The patterned brick floor used to function as the alleyway between two buildings.

Foeders from Foeder Crafters of America in St. Louis.

The brick walls and floors are all original to the building.

Now open in the East Crossroads.

Now with five breweries within about a half-mile radius, the East Crossroads boasts what James Stutsman calls a “brewer’s alley.” Stutsman, co-owner of the brand-new, 125-seat City Barrel Brewing Co., which opens today, considers this a boon for the city: “The neighborhood is a destination for beer,” he says.

City Barrel Brewing Co. specializes in wild sours and IPAs, as well as seasonal, locally sourced food. Behind the concept is a team with decades of experience in beer and hospitality, which includes Stutsman (formerly of Deschutes Brewing Co. as well as KC Bier Co.) along with his partners Grant Wagner (Tallgrass Brewing Co.) and CPA and investor Joe Giammanco. Also part of the team are head brewer Jay Meade (12 West in Arizona and Funk Factory Goseria in Wisconsin), chef Benjamin Wood (Kauffman Center for the Performing Arts, Corner Restaurant) and bar manager Michael Hughes (Stock Hill).

On walking in to the brewery, customers will immediately notice lots of exposed brick and natural wood. The brick walls and floors are all original to the building, and came together by happenstance. The 20-foot-high walls on the north and south sides of the space were originally just the exterior walls of the two neighboring buildings, both of which were constructed in the 1890s, and the patterned brick floor used to function as the alleyway between them. In the 1950s, a developer looking to build an office put a roof over the alley, and just like that, 1740 Holmes was born.

Ben Wood of The Corner Talks Beets, Eggs and the Joy of Pizza

We talked to the chef about the smell of a really good tomato sauce, sleeping in and his housemade Old Bay seasoning.

“My goal was a 36-inch wide slab of tree, which was really hard to find,” explains Stutsman. “But we found a guy in St. Joe who had this piece of lumber out in a barn that he’s had for over two years, just waiting for something to do with it. When he took it to the mill, they counted how old it was and it’s turned out to be 280 years old.”

The only wood feature inside that’s not white oak is City Barrel’s back bar, but it too has a story. Another of Stutsman’s friends is a finish carpenter who does a lot of work for the Nelson-Atkins Museum of Art, and he was fortunate enough to get to keep old wood panels, which had been used as gallery walls inside the museum for over 70 years.  He was able to repurpose them into a handsome bar.

“If you get closer,” says Stutsman, “you can see nail holes from where they hung Rembrandts and Monets. That’s a nice piece of Kansas City.”

Now, to the beer. City Barrel Brewing Co. has 20 taps, and will start Friday with 10 of its own beers on tap, and another eight “guest” taps. Opening beers include the Ahoy Gose, brewed with tart pink guava and lime, as well as the 816, a double-dry hopped blonde ale made with an all-Citra hop blend. Also available is the Cashmere Lightning, a Brut IPA, as well as the Rad AF, a double-dry hopped hazy IPA, among others. A peek inside of the open-concept brewery will also reveal two giant foeders for brewing sour beers, both of which are also made of Missouri white oak and were made by Foeder Crafters of America in St. Louis.

Eight of City Barrel’s beers are available to the public, and two are “membership only” taps. “Citizens of Amusements and Shenanigans” memberships will be available for purchase beginning Saturday, with those memberships granting access to special releases and parties once a month. City Barrel will also feature a canning operation, which will, for now, largely be done on demand. Guest taps include selections from Firestone Walker (Bretta Rose), Deschutes (Dissident Marionberry) and Perennial Artisan Ales (Sump Coffee Stout).

City Barrel Brewing Co. also offers wine, as well as craft cocktails. The signature cocktails incorporate the brewery’s beers, including a French 75 that has City Barrel’s Brut IPA substituted for Champagne, and a Manhattan made with 816 IPA bitters.

“816 is an all-Citra hop beer,” explains Stutsman. “You get all that Citra juiciness that’s all orangey, which makes the bitters orangey. It works perfectly.”

“We make it with fresh shrimp, onions, garlic, jalapeños, lime juice and lime zest – but mostly it’s the Ahoy guava sour that provides the pH high enough to 'cook' the shrimp. It gets a lime crema on top and them some fresh cilantro. We serve it with some Ritz crackers as well as some nicer flatbread crackers. It’s a play on how we see the place – whimsical with some serious elements.”

One of the most beautiful – and delicious – dishes is the All the Pretty Things salad, which features watermelon radishes, pickled shallots, fennel, dried figs, and fresh flowers atop butter lettuces, dressed in a fig-balsamic dressing. The Brewer’s Board includes Linguica sausage, mild salami, chicken-apple sausage, Cottonwood Farms Cheddar, Boursin and Parmesan cheeses, along with pickled vegetables and a housemade sweet mustard. Standout entrees include the aforementioned thick-cut Duroc pork chop, a marinated flat iron steak served with vanilla bean buttered carrots, and an herb-citrus chicken served with a lavender-thyme glaze and sautéed root vegetables.

“[The owners] are huge on seasonal, and so am I,” Wood says. “I really enjoy working with local farmers and local produce companies like Prairie Birthday Farms and Simply Foods and Salt Creek Meats, Missing Ingredient and Arrowhead Meats for Duroc pork. As we change with the seasons, the menus will change. We’ll always have great seasonal food that is comforting while still pushing the boundaries.”