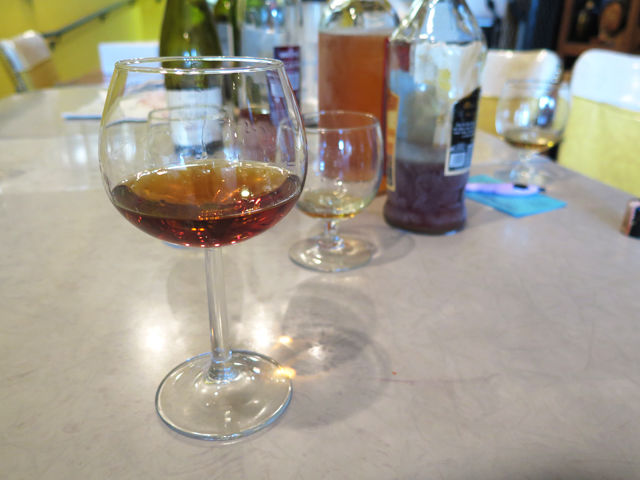 Adcock shared a sampling of rums used in his research. 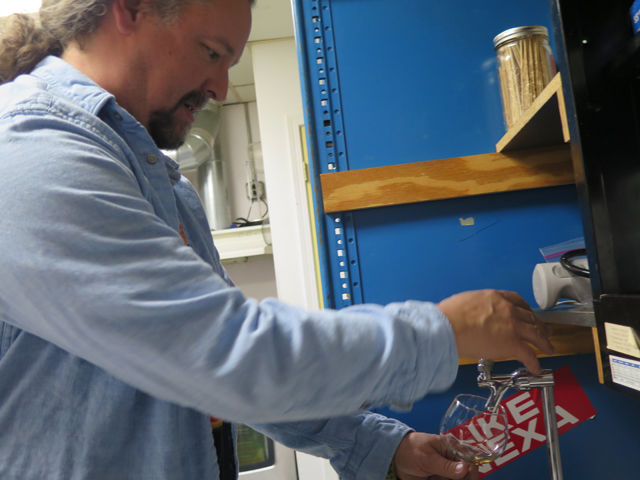 Craig Adcock taps a sample of custom made rum from a keg.

Since 1999, Craig Adcock, owner of Jude’s Rum Cake, Belly Up BBQ and Table Ocho, has prepared and sold his premium rum cakes. Named after his mother-in-law, the cake was inspired by a trip in 1995 to Panama. Adcock’s recipe once used Haitian Barbancourt rum, but in 2016 he switched to a custom-made rum produced by Rocheport Distilling Co. in Rocheport, Missouri.

“I started making rum cakes in 1999 with eight-year-old Barbancourt rum,” says Adcock. “Then I used Old New Orleans rum for three or four years, but they had significant turnover with their staff. I started getting variations in the batches. So I began working on getting my own rum.”

“Jonny had a passion for rum,” says Adcock. “We met and I gave him a bottle of Barbancourt and Old New Orleans. He knew the flavor profile I wanted and dialed it in.”

In February 2016, Ver Planck produced an earthy rum with caramel notes, using oak cubes in the process to develop a well-rounded character in the flavor profile. “There was no time to age the rum in oak barrels, but I wanted balance,” explains Adcock.

The rum was stored in kegs rather than oak barrels since it wouldn’t age further. Keg storage meant reusable containers that resulted in a “smaller carbon footprint” in production, a detail important to Adcock.

The high season for ordering and producing tens of thousands of Jude’s Rum Cakes takes place during the third and fourth quarter. In that stretch of 2016, Adcock used a keg’s worth of rum every 11 to 15 days. Typically, Adcock keeps five or six kegs on hand in high season and swaps the empty kegs with Rocheport Distilling when the company makes a delivery.

Over the next two years, Adcock plans on developing a slightly-aged bottled rum under the brand Monarch Rum. The brand name is a nod to Kansas City’s famous Negro League baseball team. That rum will also be used in Jude’s Rum Cakes, harmonizing the flavor balance with the butter and Missouri pecans used in the recipe.

Test batches of the rum will be stored in new oak, neutral and mid-charred barrels to determine the optimal flavor and aroma characteristics and aging length.

“Les Bourgeois Vineyards offered to let me use their oak barrels for aging rum,” says Adcock. “Rocheport Distilling will make it and store it at the winery. I’ll put the reserve aged rum in barrel next month and let it sleep however long it needs.”

Adcock anticipates offering a “very small” limited-release of aged bottled rum by mid-2018. He will continue to age the remainder of the rum batch.

“I’m also hoping to have aged rum for use in Jude’s rum cakes in the barrel by May 2017,” says Adcock. “I’ll begin using it for the fourth quarter 2017 production. I’ll also bottle some of this rum for release sometime in January through March the following year.”

Blending and testing over time will help Adcock hone the final product.

“Ideally, the rum will be amber in color with a woody scent, caramel on the nose, and honey and nutty notes without a lot of burn,” says Adcock. “We’re using Caribbean sugar cane and American molasses. It will be a sipping rum.”

One On One: Jonny Ver Planck, Distiller, Rocheport Distilling Co.

Les Bourgeois Vineyards is best-known for its award-winning wines, but thanks to entrepreneur and distiller Jonny Ver Planck, it has recently added Rocheport Rum to its repertoire.

Adcock shared a sampling of rums used in his research.

Craig Adcock taps a sample of custom made rum from a keg.