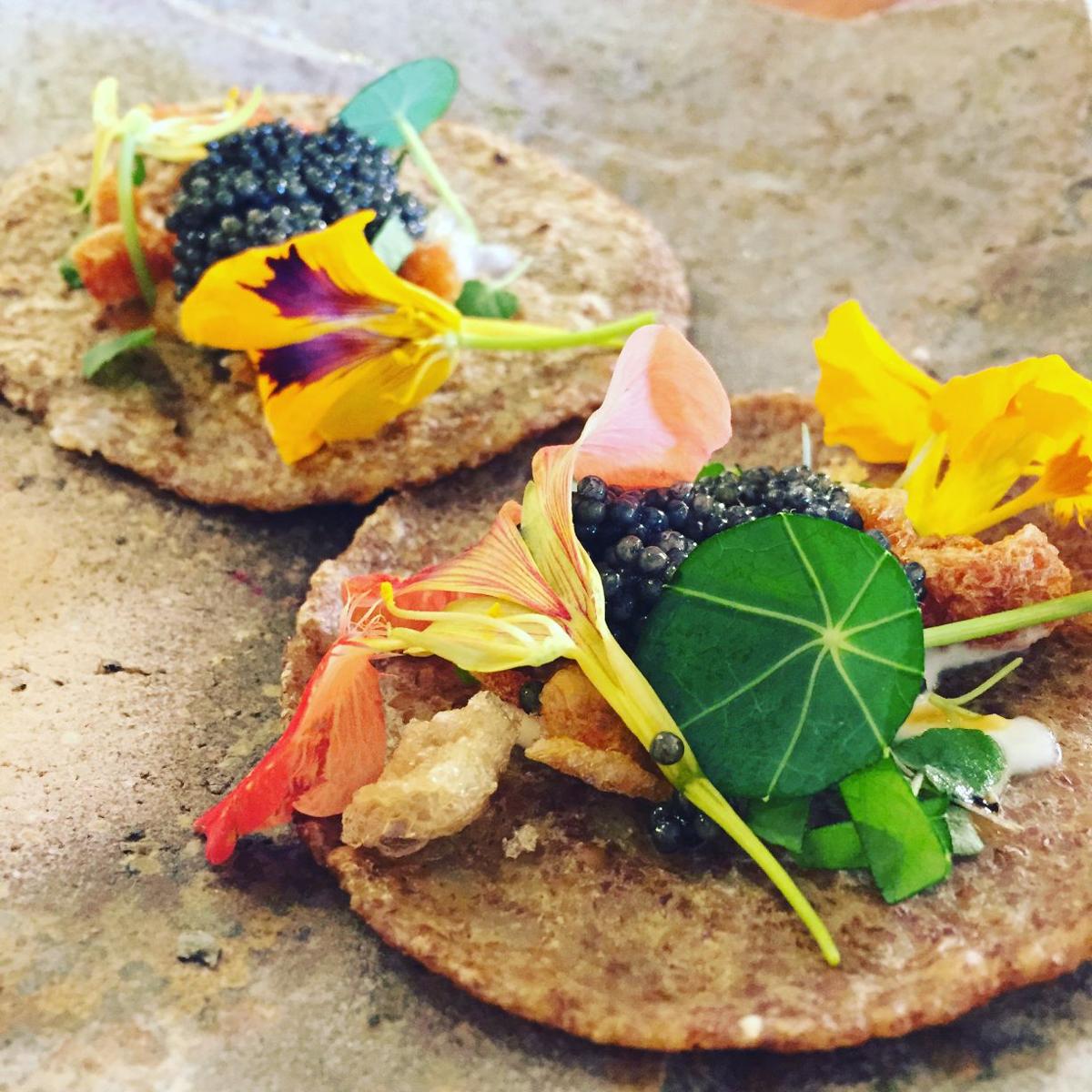 Learn how Niche in St. Louis is incorporating local caviar into its menu.

We are thrilled to announce the debut of Feast TV and share the full season outline with you along with air dates and times.

Feast TV's new season delivers the quality content you expect from Feast in a much improved package. With this new format, shows revolve around a particular topic – think chocolate, coffee, local fish or Asian cuisine – with each episode focused on delving deep and giving you a full understanding of what's happening with regard to that aspect of food and drink in our region. Host and producer Cat Neville's cooking demo will now air in its entirety at the end of the show, tying the episode together with an easy, delicious dish you can make at home paired with Missouri-made wine.

Hope you’re hungry, because in this episode, we’re getting a taste of a modern-Midwest take on ramen at Columbus Park Ramen in Kansas City, following steaming carts of authentic dim sum treats at LuLu Seafood & Dim Sum in St. Louis and discovering the secrets to Korean home cooking at Café Korea in St. Robert. Host Cat Neville gets into the kitchen and makes fresh Thai-style green curry chicken. If you can make pesto, you can make curry, and Cat will show you how.

Experience our region’s storied wine industry with visits to some of the area’s best wineries including a look at the Grape & Wine Institute at University of Missouri-Columbia, where the next vintage of winemakers is learning how to produce world-class American wines. Plus, we visit one of the region’s newest coopers, Hoffmeister Barrelworks, where the founder is hand-making white-oak barrels in Ste. Genevieve County. Visits to Stone Hill Winery, Les Bourgeois and Röbller Vineyard and Winery round out this episode and we also get in the kitchen with host Cat Neville to make risotto, a dish that spotlights wine’s versatility.

Artisan cheesemakers invite you onto their farms and into their dairies where fresh milk is made into a range of cheeses, from tangy fresh chevre to funky, fabulous aged bloomy rind cheeses. We head to southern Illinois to meet the family behind Marcoot Jersey Creamery and stop by another Jersey-cow operation at Cool Cow Creamery in Owensville, Missouri. In Bloomsdale, we see how award-winning goat cheeses are made at Baetje Farms and then it’s off the farm and into the kitchen with host Cat Neville, who will show you how to make ricotta at home and then make cheese-filled fresh pasta, highlighting the fresh cheese’s delicate flavors.

Small-scale meat production is making a comeback across the country and in this episode, we visit Newman Farm and then head to Bolyard’s Meat & Provisions, where a chef-turned-butcher brings a culinary approach to his neighborhood shop. We also visit La Quercia, one of the country’s foremost charcuterie makers and stop by Wenneman Meat Market, a full-service processor that has been taking cattle and hogs from slaughter to an in-house meat counter since 1927. In the kitchen, host Cat Neville will show you how to make an ‘nduja-stuffed pork roulade worthy of your next dinner party.

Episode 5: Coffee From Bean to Cup

This is a side of coffee that you’ve never seen before. Travel with host Cat Neville and the team from Kaldi’s Coffee Roasting Co. as they show you coffee’s journey from bean to cup. At the height of coffee’s harvest season, they trek to El Salvador to visit three family-run plantations. Each farm takes its own approach to growing and harvesting coffee and we take you into the fields and behind the scenes at an on-site cupping where Kaldi’s tastes and chooses the lot that is then shipped back to Missouri, where it is roasted and brewed for local coffee lovers to enjoy.

This episode’s smokin’! Meet some of the folks behind the region’s incredible barbecue industry, including the man who launched Ole Hickory Pit, the Cape Girardeau-based company that’s building some of the country’s best-regarded smokers, plus we attend the Whole Hog Extravaganza at 17th Street Barbecue and hear from Mike Mills, one the best in the business. In Kansas City, we check in with Danny Edwards about his family’s long history of smoking meats in Cowtown. The episode continues with Mike Emerson at Pappy’s Smokehouse in St. Louis and Cody Smith of City Butcher and Barbecue in Springfield. Back in the kitchen, host Cat Neville shows you how to make classic sauces including Alabama-style white, South Carolina mustard and a Kansas City sweet tomato-based sauce as well as an incredibly easy pulled pork.

Fish isn’t just flown into the Midwest from coastal sources. Here at home, we produce a number of delicious things aquatic. In this episode, we visit with Nate Hereford, executive chef of Niche Restaurant in Clayton, Missouri, and see how he's working with local caviar and trout. Then, we head to rural Missouri to see freshwater trout raised in cold, clear spring water at Troutdale Farm, which sources fish to the region’s best restaurants. We’ll also stop by Anton’s in Kansas City, where an aquaponic system (in the basement, no less) creates a haven for tilapia and fresh greens and then we head to Osage Beach to see how paddlefish roe is made into world-class caviar. In the kitchen, host Cat Neville fries up some fresh tilapia for crunchy fish tacos with a spicy aioli and fresh cabbage.

Everyone loves chocolate, and in this episode we are exploring the delicious indulgence from bean to bar to confection. Our first stop is at Kakao Chocolate in Maplewood. Then, you’ll watch as single-origin chocolate bars are made at Askinosie in Springfield, from roasting the fermented beans to forming the bars. This episode also takes you inside some of the region’s best confectioners who are making truffles and bon bons by hand: Christopher Elbow in Kansas City and Bissinger’s in St. Louis. Chocolate isn’t just for sugar-lovers, though: host Cat Neville will show you how to simmer perfect Oaxacan-style chicken mole in your own kitchen.

Craft spirits are the fastest growing segment of the local beverage industry. Get inside this exploding business with visits to Pinckney Bend, a distillery that is working with heritage varieties of corn, plus Missouri Spirits, a distillery that has grown exponentially since launching in 2011 and now boasts a bar and restaurant where spirit lovers can indulge. After a barrel-fermented stop at StilL 630 in St. Louis, we’ll also visit Montelle Winery, where grappa and brandy are distilled, as well as eau de vie made with fruit grown on site. Spirits flavor more than cocktails and in the kitchen, host Cat Neville will whip up a rustic apple galette with an easy-to-make whiskey caramel.

Nothing’s more American than pizza. Except, maybe, Neapolitan pizza, and in this episode we head to Il Lazzarone, an Associazione Verace Pizza Napoletana-certified wood-fired pizza place that pulls blistering pies from the oven every 90 seconds. We’ll also get a taste of classic American pizza at Shakespeare’s and visit this iconic college hangout, which has been rated one of the best college-town restaurants in the country. We’ll also check out how frozen pizza is made at Dogtown Pizza, a company that hand-makes St. Louis-style pizza you can bake at home. In the kitchen, host Cat Neville will show you how to make ooey-gooey calzones with three different savory fillings.

It’s the most important meal of the day! Watch as long-fermented, boiled and baked bagels are crafted by hand at Legacy Bagelry, a tiny artisan shop tucked into an unassuming strip mall in Springfield. You’ll also visit Stanton Bros. Eggs, the country’s largest free-range egg operation near Columbia, which is run by two young brothers. Finally, what’s breakfast without maple syrup? We take you to Indiana to meet one of the country’s leading producers of the American sweetener at Burton’s Maplewood Farm. And, back in the kitchen, host Cat Neville uses that syrup in Chambourcin-maple syrup braised short ribs with brown-butter egg noodles.

The craft beer industry just keeps growing and in this episode we visit Brew Hub, a company that is helping small brewers meet the growing demand. You’ll also get behind the taps at Urban Chestnut, Mother’s Brewing, Earthbound Beer and Crane Brewing to meet the brewers who are pushing the industry forward and find out what makes each brewery unique. Then, get in the kitchen with host Cat Neville and make Spanish-style beer-steamed mussels with an ale from Public House Brewing.

The artisan movement isn’t just playing out at the hands of chefs and farmers. Craftspeople are making furniture, flatware, tableware and knives by hand, using age-old techniques and repurposed materials. We introduce you to three folks who are bringing hand-crafted design to restaurants and shops here at home. At Facture Goods, clay, metal and wood are used to craft gorgeous kitchen and tableware. We take you to Vita Craft to see how chef-quality riveted stainless steel cookware has been made since 1939. Plus, we watch as chef’s knives are hand forged at Halcyon Forge using reclaimed and recycled steel. Back in the kitchen, host Cat Neville uses Vita Craft pans and bowls from Facture Goods when making an Indian-style korma curry with sea scallops.

All of us at Feast would like to extend a very sincere thanks to our production partners, Tybee Studios and LP Creative Studio. They put in many long hours and spent days on the road to bring our vision to life. They are incredibly talented and without them, the show couldn't be what it is today. And, of course, thank you to our sponsors, which make the entire show possible: Missouri Wines, Whole Foods Market, L'École Culinaire, The Raphael Hotel and New Seasons Spa and Salon.

Check your local listings for more airdates. If your PBS station does not air Feast TV, let us know and we will work with the station to make sure they have access to this delicious content.