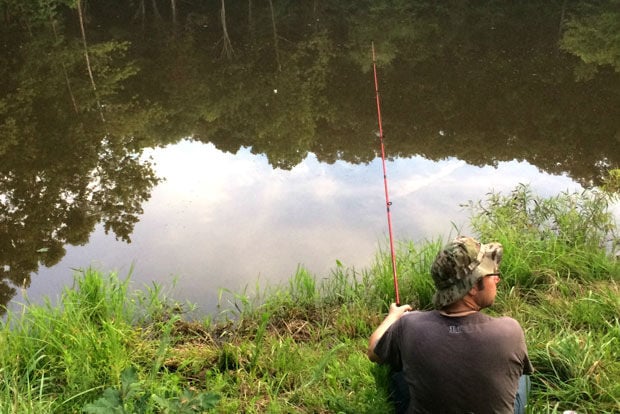 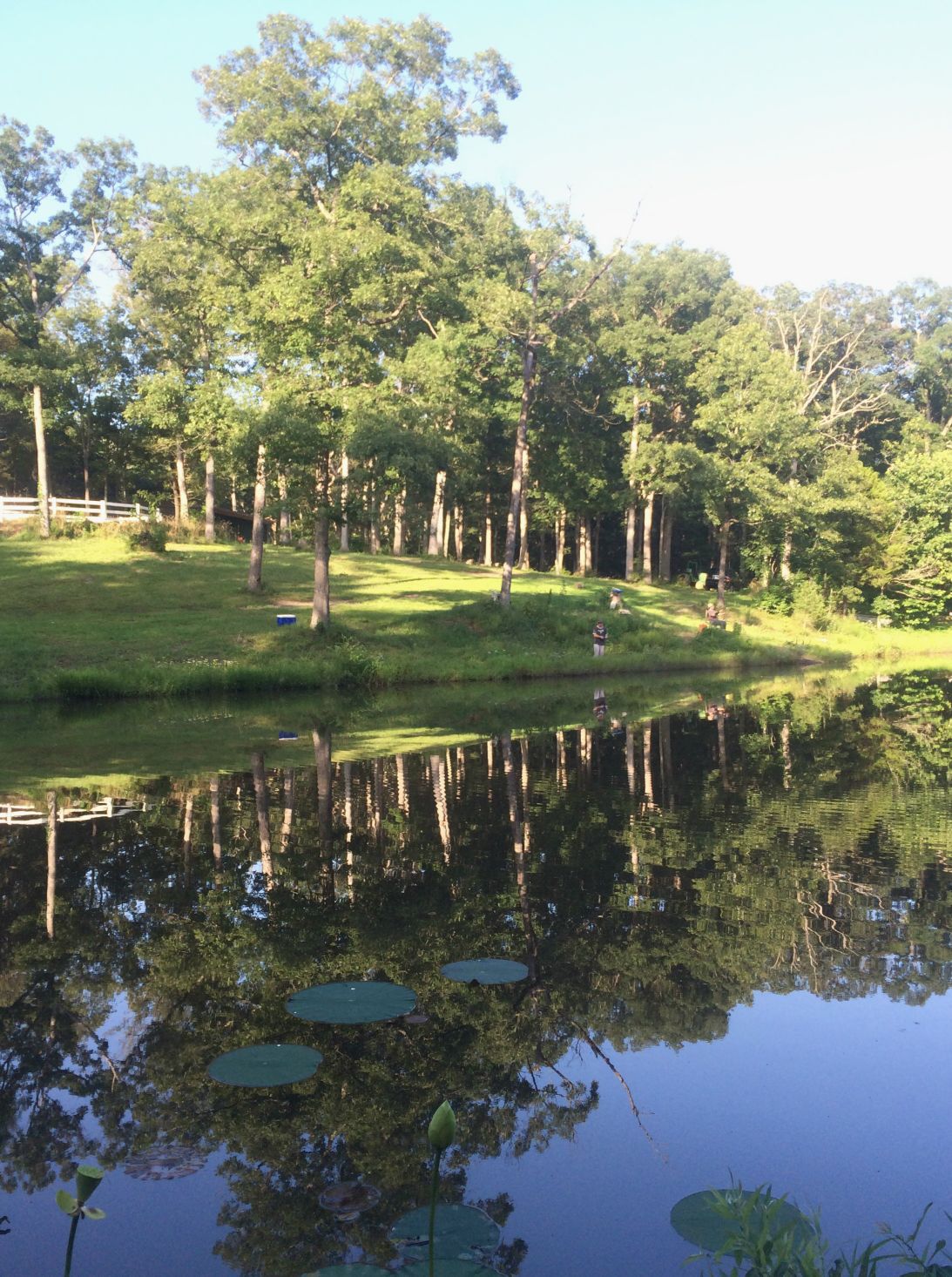 The man-made lake near Catawissa. 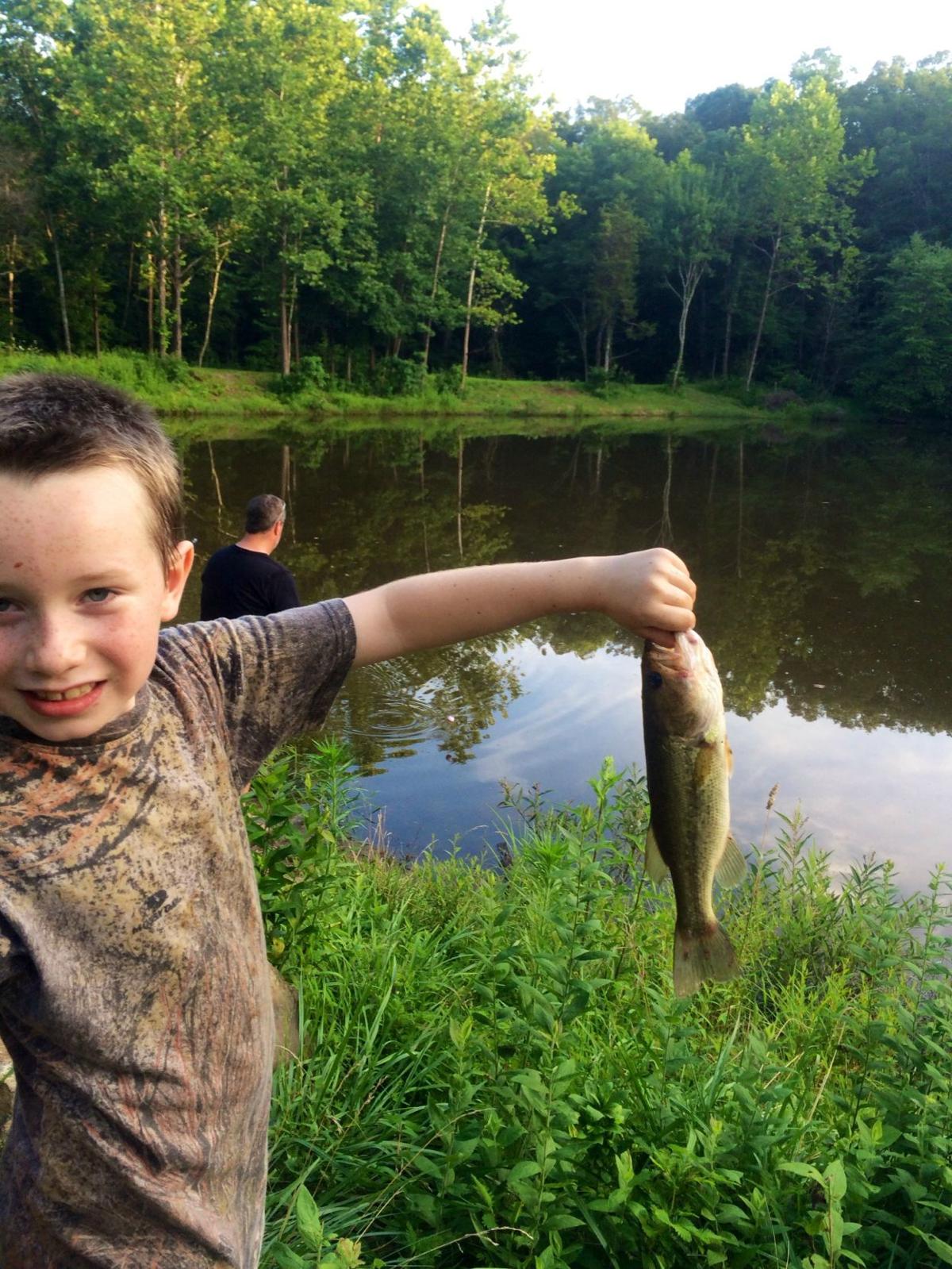 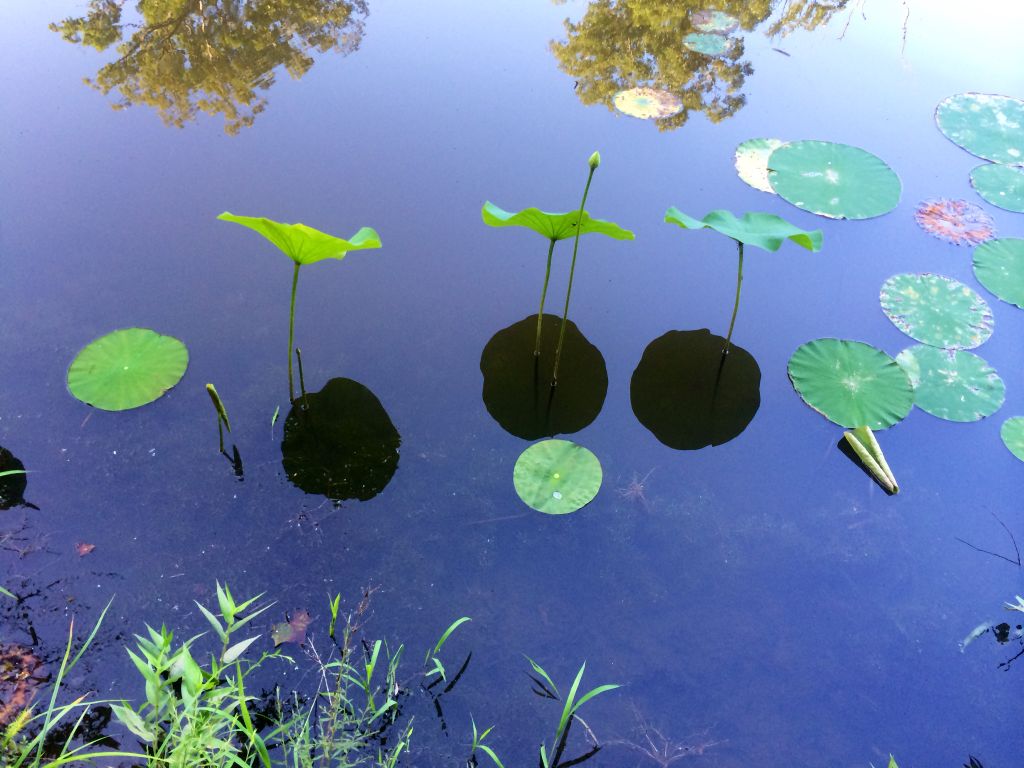 The experiment wasn't a total disaster: Thomas Crone understands the appeal of fishing. 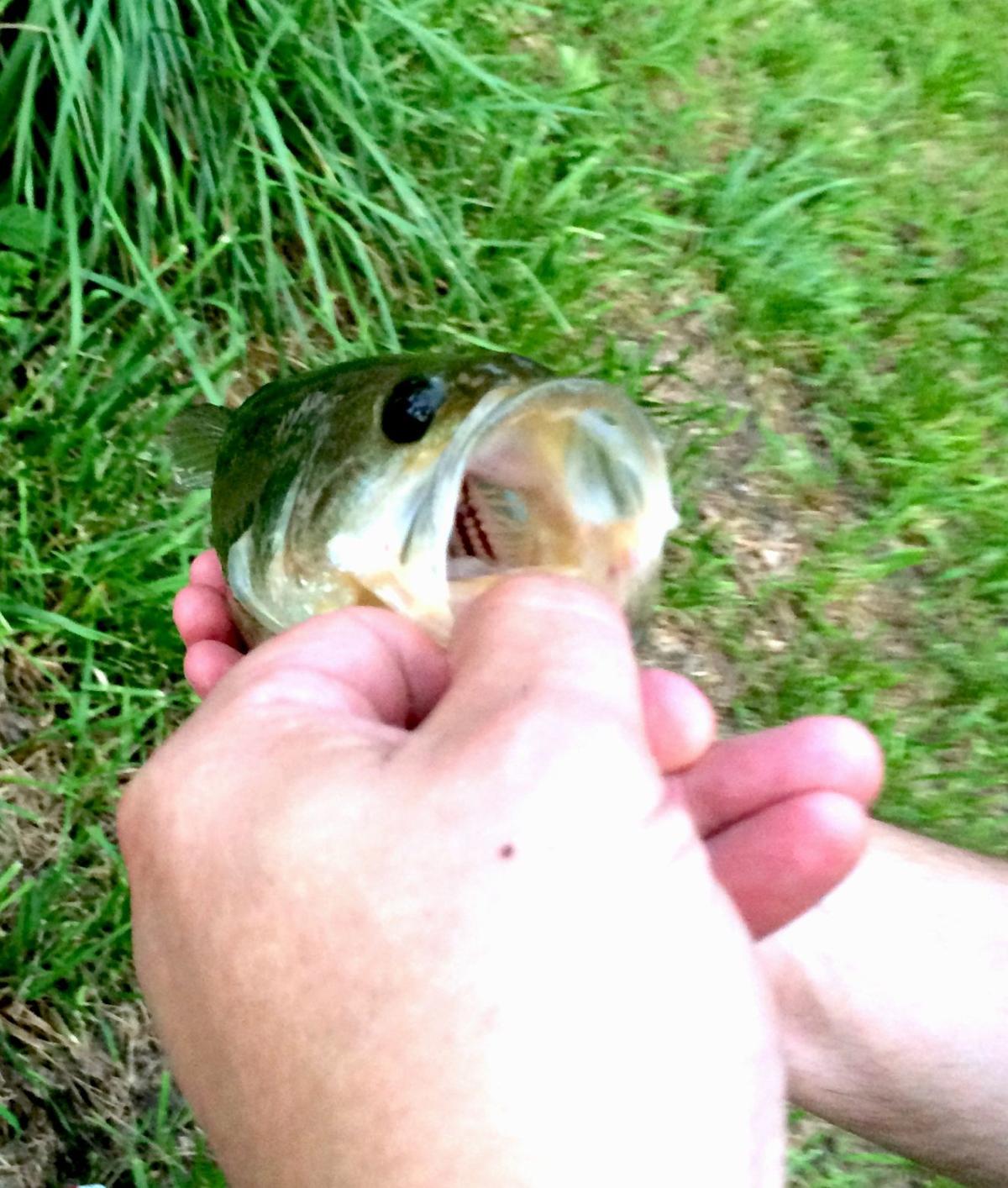 There were plenty of fish to be caught, but the experiment did not end as expected. 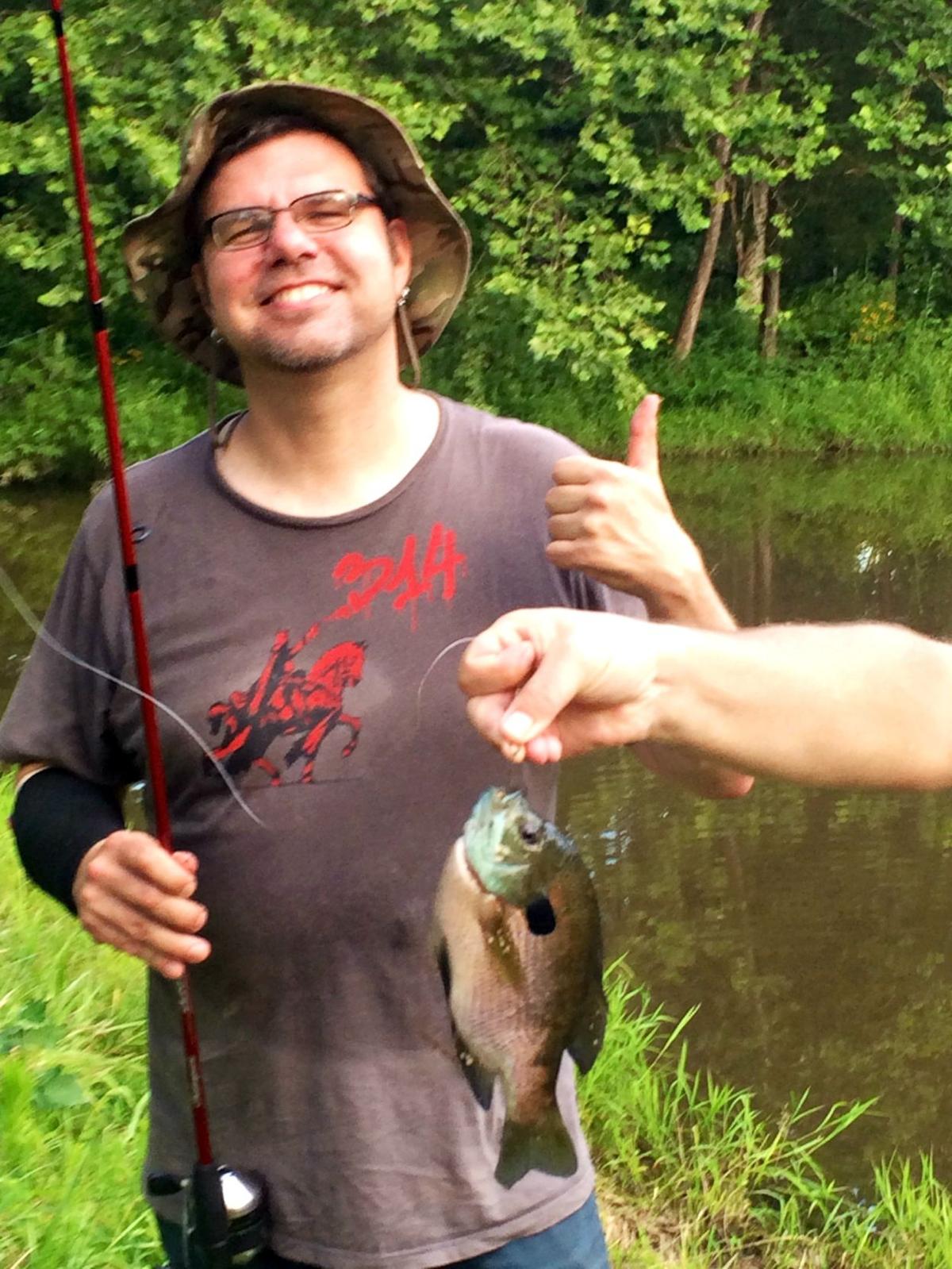 Writer Thomas Crone with his bounty.

Since January 1, I’ve played around with the idea of harvesting my own food for the purposes of retrofitting a longtime-vegetarian, sometimes-vegan diet. To date, this 2015 experiment’s met with mixed results, and I’m currently an ovo-pescaterian. Fishing seemed like one of the easiest ways to ease into the process, yet, it, too, has offered up some challenges, in both winter and summer versions.

Over the late winter, I sat lakeside in Carondelet Park on multiple occasions, armed with fishing gear (and instructions) supplied by a friend, Louis Galli. In deep South City’s landmark park, I was attempting to catch trout sprinkled into the lakes there by the Missouri Department of Conservation. Even on brisk mornings, the place offered an interesting vibe, with fishers from all over the world scattered along the sides of the concrete banks. While I enjoyed my experience of urban fishing on a theoretical level, I never actually left with any, you know, fish. As a newbie, though, just fishing that little bit teased of a new, interesting, contemplative activity. All of those moments lead to this past Sunday’s trip to Jefferson County, for a little bit of catfishing.

The Background: A friend, Joe Thebeau, was quick to offer a private lake for a catfishing experience. His cousin, Scott Reed, lives with his family on an expansive, wooded plot of land near Catawissa, Missouri. Crafting a homestead from the forest, he’s allowed his family a view of a two-acre pond through the careful use of forestry, slowly cutting free a clear vantage point to that lovely, 30-year-old man-made lake. His son Eric, 8, is the biggest fan of that water in his family, as well as the surrounding woods and glades; he knows every fishing nook and cranny along the banks and led some of our party on a (very successful) mushroom-hunting trip in the hills.

Reed’s the generous and gregarious sort, talking through a fishing trip with a series of instructional notes, musings on life and general merriment. He dotes on the pond and its inhabitants, too, tossing out some meal for the catfish every few days. They live up to their reputation as bottom dwellers during the hot summer months, when the water’s heating up; the Reed pond, though, is also home to sunfish and large-mouth bass, which have been biting in recent weeks, as rains have raised the water level and muddied the waters, quite literally. As a place for a first-time, out-in-the-woods, fishing-with-worms, legit fishing experience, the Reed homestead was straight-up awesome.

The Kill: With our lady friends off hunting mushrooms, Joe and I cast for catfish, using some liver and cheese stink bait, as well as worms. As it turned out, the only cats that were biting came from a group of several-dozen “baby cats” that were introduced this year; all went back in the water — holes in their mouths, but alive. None of the mature ones were having anything to do with us, though the dynamic changed completely when the trees blocked out the brightest light. The pond, now cast in shadows, suddenly came to life. We collectively snagged five bass and three sunfish before sundown.

Having gone four-and-a-half decades without threading a worm onto a hook, I can say that it took practice, even with Reed’s coaching to “treat [the worm] like hot dog,” with the barb horizontally spearing the worm, before a second piercing. The worms? Well, they feel all this activity, their tiny, night-crawling bodies reacting in obvious distress when punctured. But to be a fisherman, this was the way. And I killed a whole bunch of worms on Sunday, that I did. Oy.

The Butchering: Okay, so. Things got interesting at this point. Reed and son Eric fish a lot, catching all manners of fish from the pond. They’ve got a pretty bare-bones butchering station and we began to break down filets under the artificial light of multiple lamps. The first fish, a sunfish, was a real challenge; there’s not a lot of meat on those bones. The bass are bit weightier, but not by a lot, and we took turns carving up a couple of bass before noticing something… creepy. And crawly.

That second bass wound up riddled with worms. At least two dozen of them were dotting the fish’s flesh, from near the head through the tail. This was true on a couple of the other bass, too; in one case, the worms were visible from the exterior, shining through the bones and tough flesh of the tail. Our small bag of successfully harvested sunfish meat was looked at closely and, sure enough, a singular worm was wriggling around that bag, compliments of that first bass. Bummer! We looked up info on cell phones, as both Reed and Thebeau swore that they’d never seen such a thing in decades of combined fishing. We wound up scuttling all the meat after butchering it, not even saving the heads-and-guts for the Reed’s outdoor cats, who missed out on a meal as surely as we did.

The Cooking: Well, yeah, that didn’t happen. See above. Ugh.

The Intensity Level: Truly, I now get why people fish. There’s the short trip to the water, the social aspects of packing a meal, of catching up on news about old friends. Meeting new ones, too. It’s all right. That said, I doubt the worms we bought felt the same. (Ditto the fish.) Threading the hooks, casting, getting a spirited fight (especially from the sunfish) — all of it made for an interesting late afternoon and early evening, with domestic beers aiding in the battle with reasonably harsh summer heat. I’d do it again. And, after dealing with the worms in such a violent, fateful way, I’d consider eating some of those, too. Who’s got a recipe?

Overall Experience: Fun build-up, fun during activity, no fun in eating those pitiable, worm-ridden bass. (Which, as the world wide web suggests, is fairly common in lakes and ponds, once one species begins to outpace the food supply.) The web was less clear on whether, or not, to eat fish that have been affected in this way. We passed, citing the gut-level “ewwww” factor, as much as science or web opinions. But there’s always another Sunday, another pond, another fish in search of a worm.

Feast freelancer Thomas Crone is open to interesting and unique experiences for this Ax to Table Experiment; email him at thomascrone314@gmail.com if you’ve got leads.

Ax to Table: The Crawfish Boil

Writer Thomas Crone eases back into his Ax to Table experiment with a crawfish boil at Broadway Oyster Bar.

The man-made lake near Catawissa.

The experiment wasn't a total disaster: Thomas Crone understands the appeal of fishing.

There were plenty of fish to be caught, but the experiment did not end as expected.

Writer Thomas Crone with his bounty.