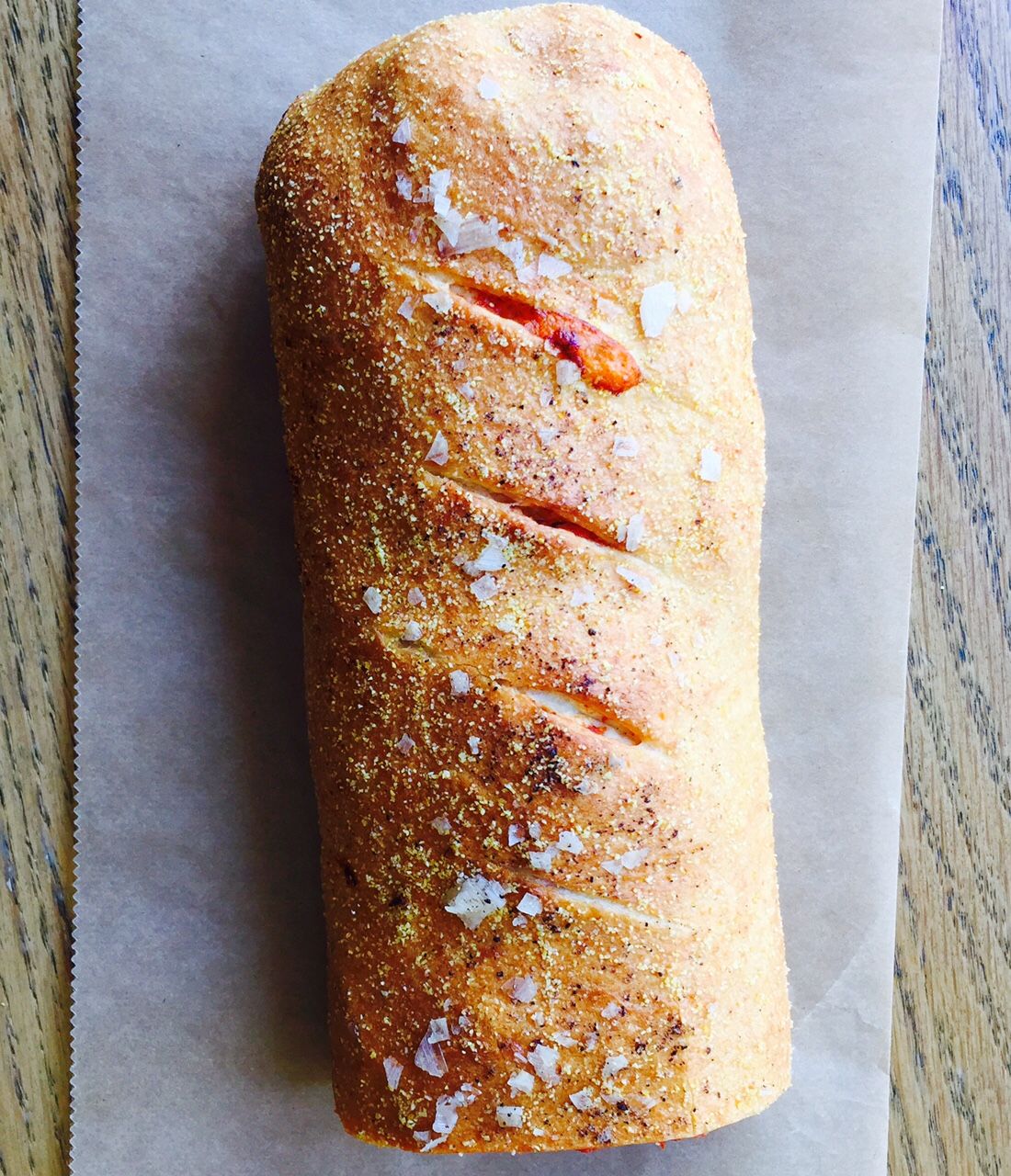 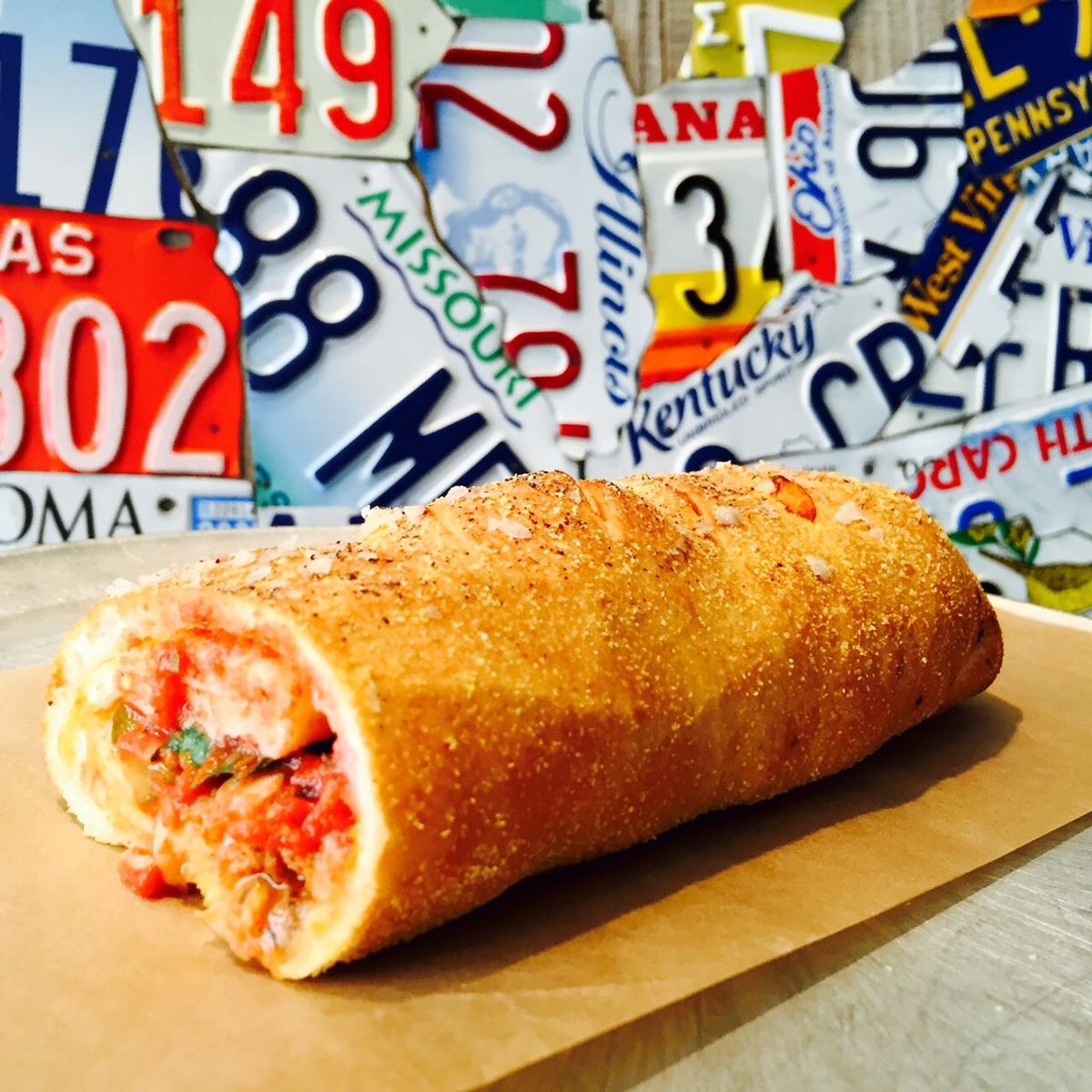 Pi Pizzeria has officially made gourmet pizza mobile. The restaurant unveiled a new creation last week called the Pi Stick, a burrito-esque pizza wrap of sorts. It offers a portable way to enjoy a classic Pi meal. Chef Cary McDowell says the idea sparked from Pi's new South Beach, Florida location, which is next to a nightclub.

"We developed this to give somebody that may be standing in line or coming from outside of a club or concert the ability to eat something very satisfying that could deliver the pizza experience, without the traditional pizza form,” McDowell says.

While South Beach set things in motion, St. Louis is the first and only place to currently have the dish. The pizzeria saw ripe opportunity to debut it during a collaboration with rock band Wilco last week. Pi was already working with the band to create a new pizza called "Whole Love" for its May 4 St. Louis concert. So the Pi Stick was introduced through Pi on the Spot, the restaurant's food truck, conveniently across from the band's show at The Pageant that same night.

“We also used that captive audience to say, 'We’re so excited about this collaboration with some old friends of ours that since we have the truck here, we’ve been working on this new song — the new song being the Pi Sticks — and we want to play it for you tonight,'” McDowell says.

The Pi Stick is only available through Pi on the Spot at the moment, but McDowell says it will make its debut in Pi's five St. Louis restaurants sometime soon.

However, the pizzeria didn't want the Pi Stick disrupting their core menu, so McDowell says it's just another avenue of expression from the pizzeria's current offerings. For the moment, there are two variations of Pi Sticks available — the Maplewood (mozzarella, spicy sausage, cherry pepper, fontina and basil) and the Western Addition (mozzarella, baby spinach, mushroom, onion, ricotta, feta and garlic). Each Pi Stick runs $9 a piece.

“We found that in our testing those were our favorites," McDowell says. "We wanted to premiere [the Pi Stick] with those tried-and-true combos. But we certainly intend to get super creative.”

It's no surprise then that Strange Donuts also wanted in on the action. McDowell didn't want to reveal details quite yet, but did confirm they are planning a special Pi Stick with Strange Donuts for a summer release.

While the pizzeria is still planning where their food truck will park in the near future, it's likely that it will often show up around the store's flagship location in the Loop, since it's across from a concert venue. The stick made another appearance right outside yesterday's Death Cab for Cutie show at The Pageant.

“A lot of these projects we do as chefs are like any creative endeavor — sometimes they see the light of day and sometimes they’re ready for prime time," McDowell says. "We feel really excited that we’re ready to roll this thing out, stand behind it and see where it takes us.”

Strange Donuts and Pi Pizzeria Roll Out The Caldone

Pi Pizzeria continues the legacy of their new Pi Stick concept by launching The Caldone, in partnership with Strange Donuts.

At Pi Pizzeria in Washington, D.C., a Taste of St. Louis, in Translation