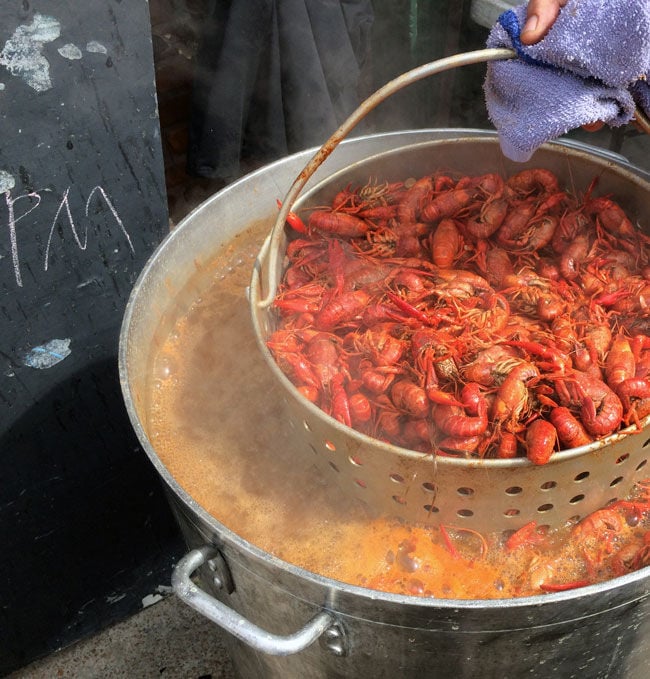 Broadway Oyster Bar boiled its crawfish in twenty-pound batches all weekend at the annual Crawfish Festival. 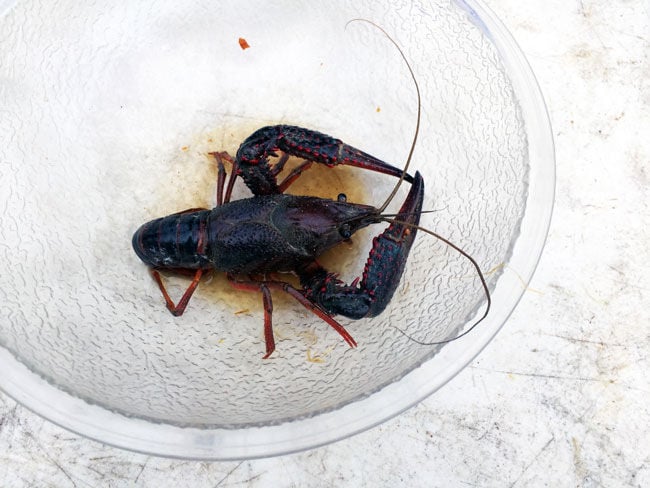 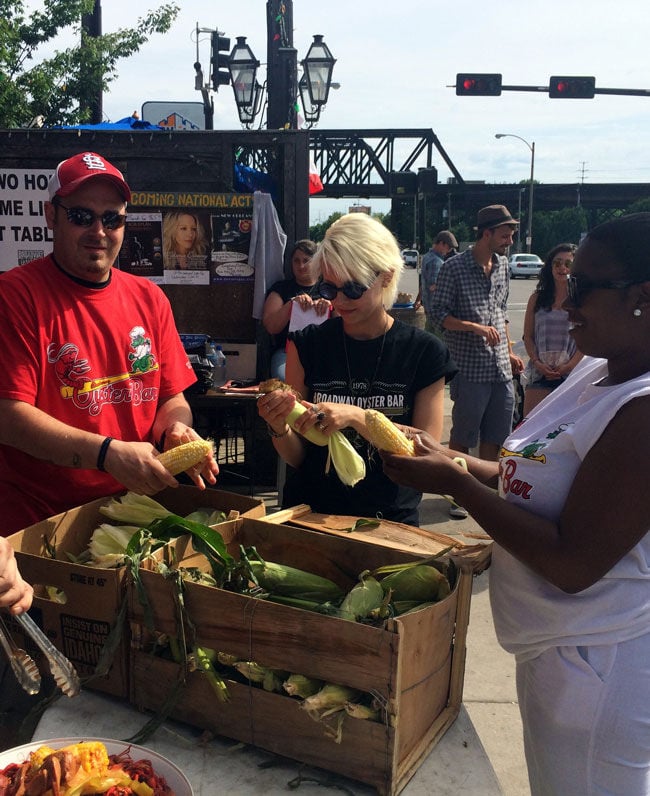 Shucking corn for the boil. 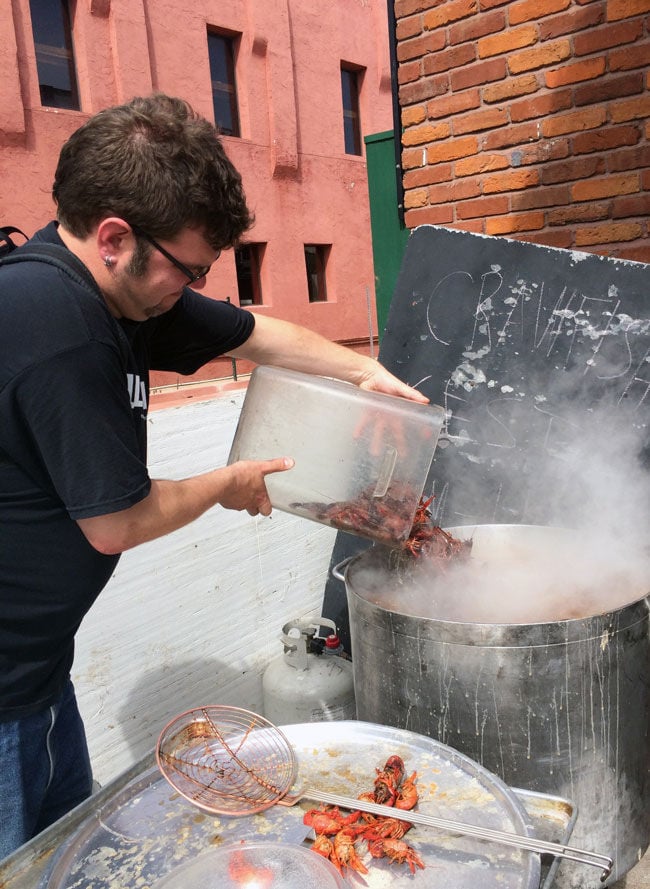 Pouring crawfish into the boil was much less traumatic for the author than the hog slaughter. 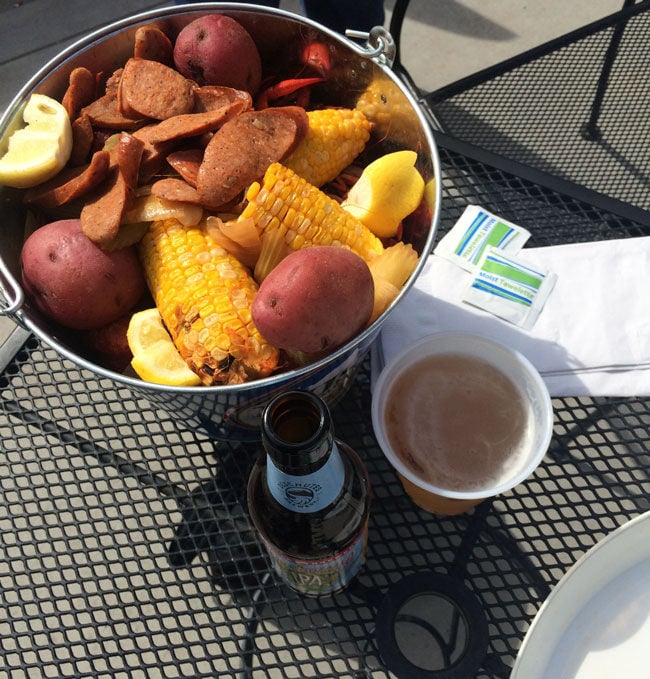 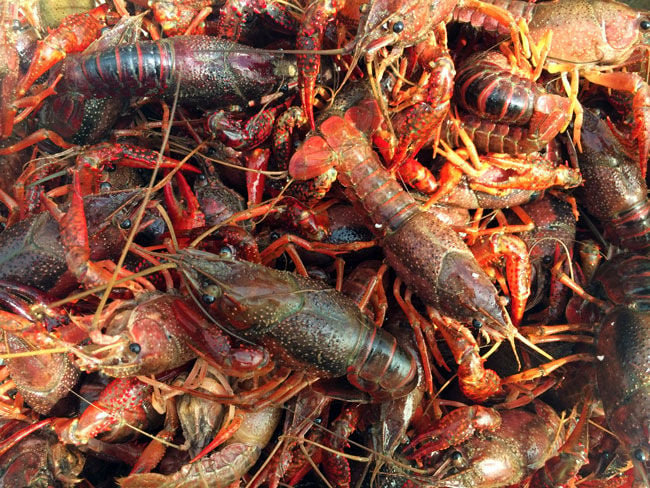 There's not a lot to these little guys, as the author found out. 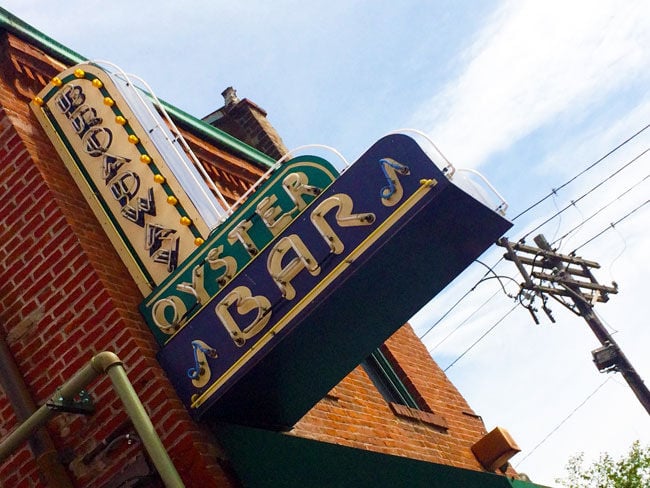 Broadway Oyster Bar hosts a crawfish boil every year as part of its series of food festivals.

It’s been a while since the last installment of “Ax to Table,” a year-long exploration of maintaining a vegan lifestyle while also eating only animals I personally harvest. Since March, when I attended a hog slaughter, my dietary choices have veered wildly from the original intent. If you believe that a single experience can change how you live life, then my day with that Berkshire hog (RIP) morphed this project, certainly, and also my approach to meals going forward.

For starters, I’ve flipped back into an ovo-pescaterian lifestyle; although I spent years as a vegan in my 20s, it just wasn’t sticking this time around. Also, after four and a half years of giving up soda and energy drinks, I’m back on those. My interest level in meat’s been all over the map, too, from wanting to experience more things this year to simply wanting to abandon ship on this personal project completely. So, yeah, the hog slaughter was probably my least enjoyable, most unsettling day of 2015. In order to make some peace with that and to get “Ax to Table” back in motion, I attended the Crawfish Festival at Broadway Oyster Bar last weekend, and something very unexpected happened along the way.

The Background: After missing out on a friend-of-a-friend’s backyard boil a few weeks back, it was good news to hear that Broadway Oyster Bar was featuring a Memorial Day weekend boil. Owner John Johnson invited me down to “cook” with staffers; that meant meeting up with John Sewell, BOB’s sous chef, who was manning the boil station in front of the venerable oyster bar on Saturday. He and his associates had a assembly line system, with everything in place to serve up whole- and half-portions of the boil, including: the crawfish, perfectly-boiled new potatoes, cooked vegetables, seasoned corn on the cob and andouille sausage.

The Kill: Sitting in front of Sewell’s efficient station was a single, plastic bowl, which contained the largest crawfish imaginable, an absolute beast. Let’s go ahead and call it The Beast. Sewell had just dumped two vats of crawfish into a steaming cauldron as we arrived, so we waited for about fifteen minutes as they simmered. As two new vats arrived, Sewell explained that the crawfish are first washed, then prepped in salt water, which — not to be indelicate — loosens up their insides, making for a cleaner meal. As he scooped out the now-cooked crawfish, he suggested that I pour The Beast in first. In it went. Then came a clear bucket of crawfish, about twenty pounds’ worth, followed by a second twenty-pound batch. In the past, I’d become gummed down at this moment, wondering about the animal’s life prior to that moment, pondering my own existence and…well, you get the picture. This time: no thought. In they went.

The Butchering: No butchering, per se. Instead, Sewell figures that the crawfish have about 30-40 seconds of sentient life after being popped into the pot. After that, they simply stew in the house seasonings. The amount of meat, I’d always heard, was minimal — that was very true. There ain’t much to a crawfish.

The Cooking: Sewell estimates that about 60 percent of folks at any crawfish event are there for the first time. They all have questions and he, of course, has all the answers. He figures that another 20 percent are vets and don’t need coaching and that the remaining balance are couples or mixed groups, in which one or more people know how a boil works and what’s served. For Sewell, every twenty minutes meant a new cycle, with more cleansed crawfish arriving. Deftly assembling orders, he tossed the crawfish onto either a server tray for the half-boil, or into a Busch beer bucket for the full-boil, topping each tray/bucket with the aforementioned veggies and sausage.

The Intensity Level: Honestly, my notion of going back to this project needed to be paired with a relatively mellow task. Here, there was a friendly, agreeable staff to work with, a nice environment to watch the proceedings and, frankly, an animal that’s not very high on the evolutionary flowcharts. Even though the crawfish were bopping around the plastic vats, lively and attempting to crawl to the top of the stack, killing them didn’t bring the same emotional punch as previous subjects like chickens, a rabbit or a pig). I will say that eating The Beast had a slightly stranger vibe, as that one enjoyed its last minutes differently from the rest. It was a majestic animal, in its own prickly way.

The Overall Experience: I suggested that this crawfish event brought a twist. And it did. For the first time since 1988, I willingly ate pork. Having passed on the Berkshire hog back in March, I always felt off, or conflicted, about the choice to not eat that meat, though it was hard to articulate why, especially as it was suggested that I wouldn’t have much to do with the kill. But with the andouille tossed right on top of the crawfish and vegetables, I went ahead and had the full meal, including a few bits of andouille. (And yes, I did feel sick later, though it wasn’t even half as bad as I’d expected.) I can say that peeling through the tiny crawfish tails isn’t something I want to do again soon, but the process went better when accompanied by a couple drafts from nearby 4 Hands Brewing — crawfish and beer make sense together. The vegetables, meanwhile, were just fantastic and the andouille sausage was… interesting. Out of all the things that I’ve occasionally longed for since last eating meat during the Reagan administration, andouille never crossed my mind. But weird things can happen at bars on Broadway.

Feast freelancer Thomas Crone is open to interesting and unique experiences for this Ax to Table Experiment; email him at thomascrone314@gmail.com if you’ve got leads.

Ax to Table: The Fishing Experience

In the Ax to Table Experiment, writer Thomas Crone will eat only what he personally harvests.

Ax to Table: The Hog Slaughter

Writer Thomas Crone watches while a hog is slaughtered — but then decides not to eat it.

Broadway Oyster Bar boiled its crawfish in twenty-pound batches all weekend at the annual Crawfish Festival.

Shucking corn for the boil.

Pouring crawfish into the boil was much less traumatic for the author than the hog slaughter.

There's not a lot to these little guys, as the author found out.

Broadway Oyster Bar hosts a crawfish boil every year as part of its series of food festivals.