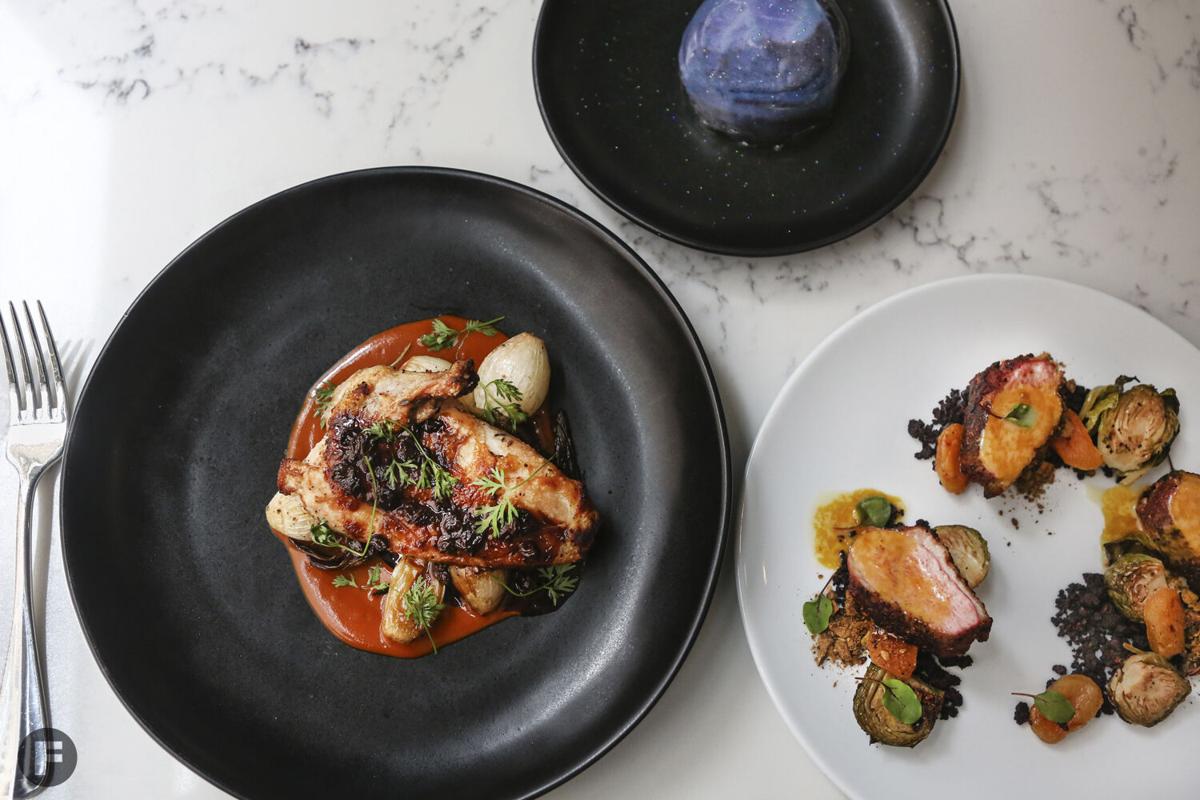 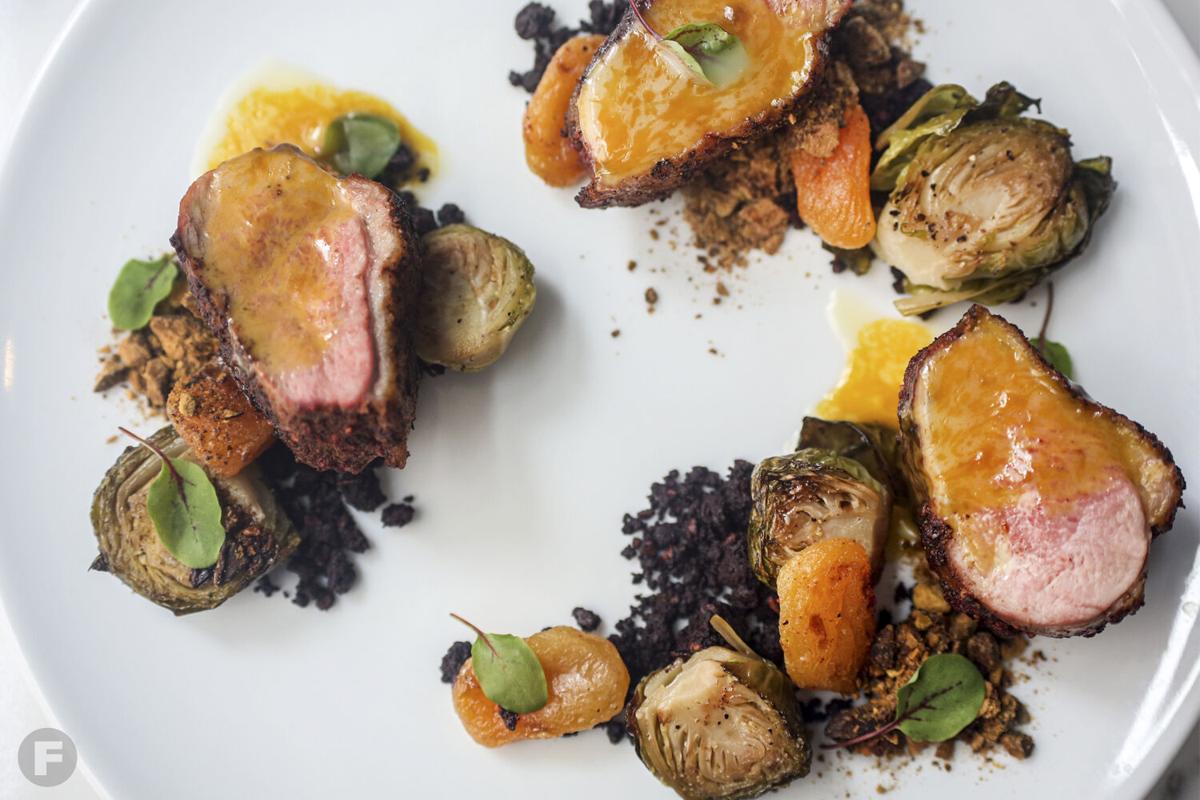 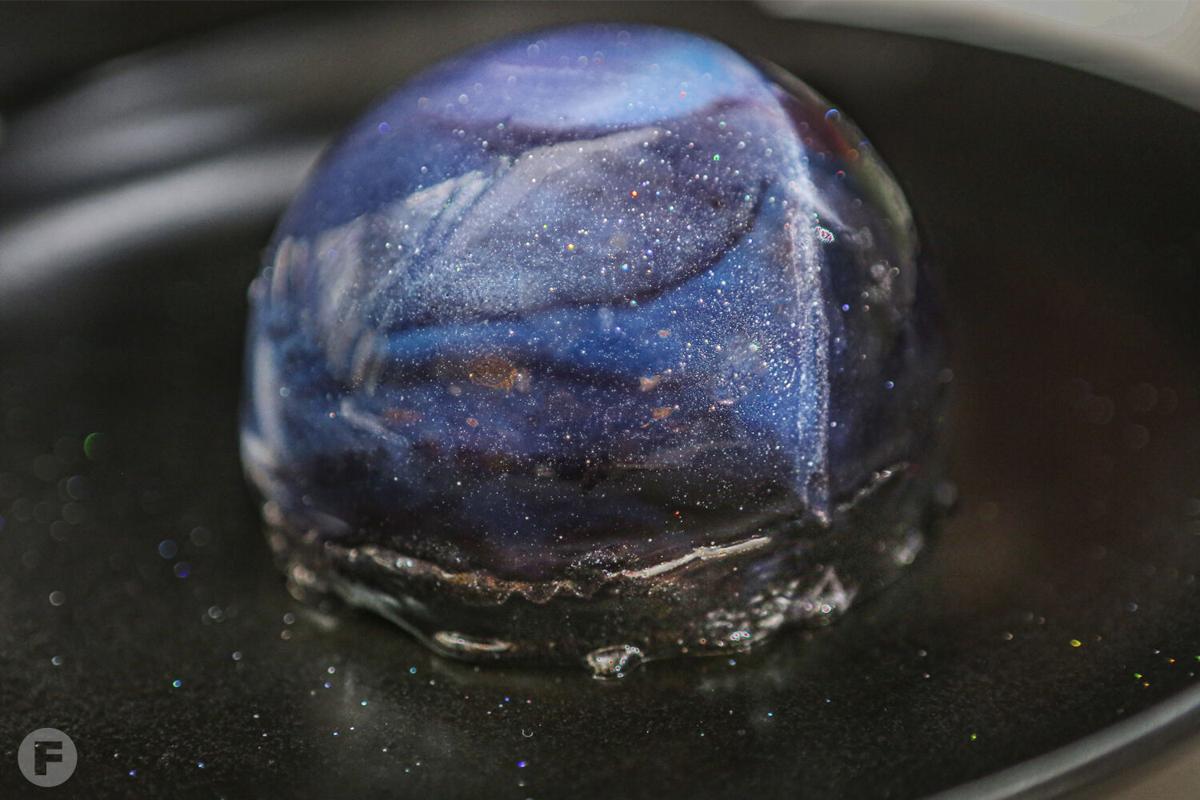 The Starry Night is the crown jewel of desserts at Commonwealth, featuring layers of chocolate torte, chocolate crème patisserie and blueberry compote underneath a tempered chocolate dome finished with a mirror glaze. 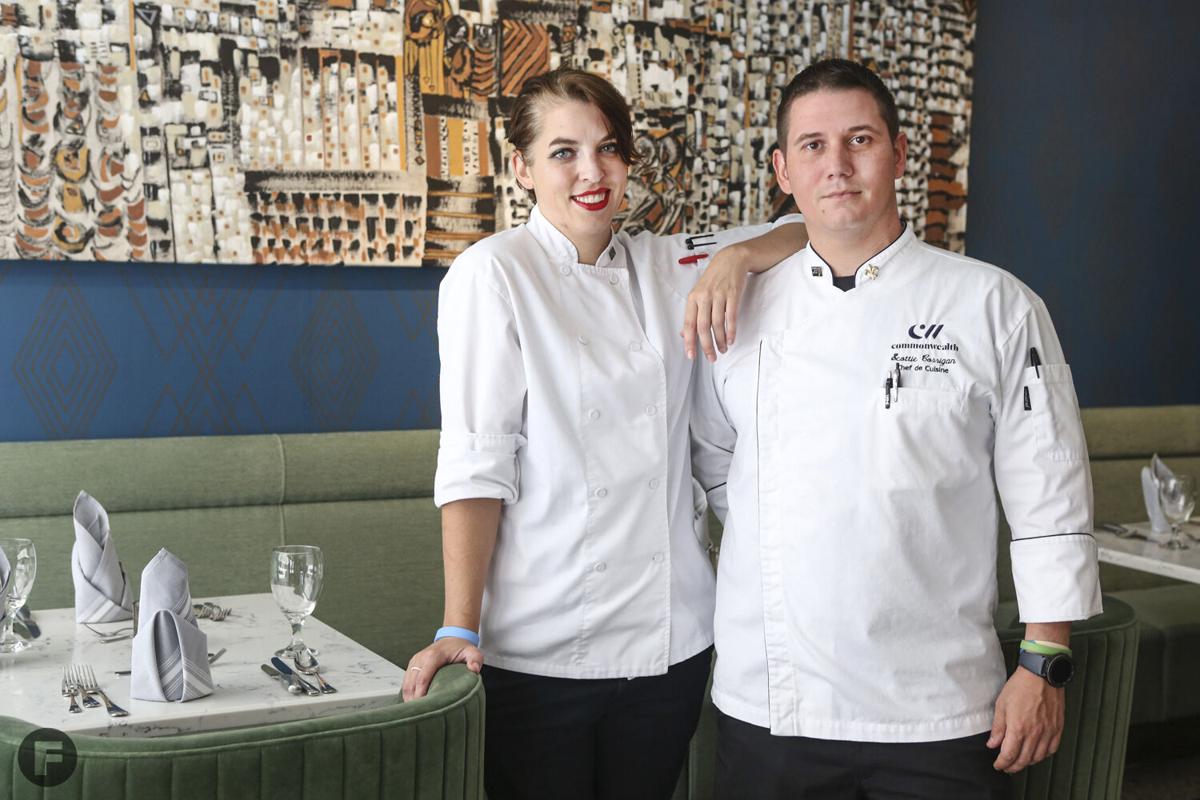 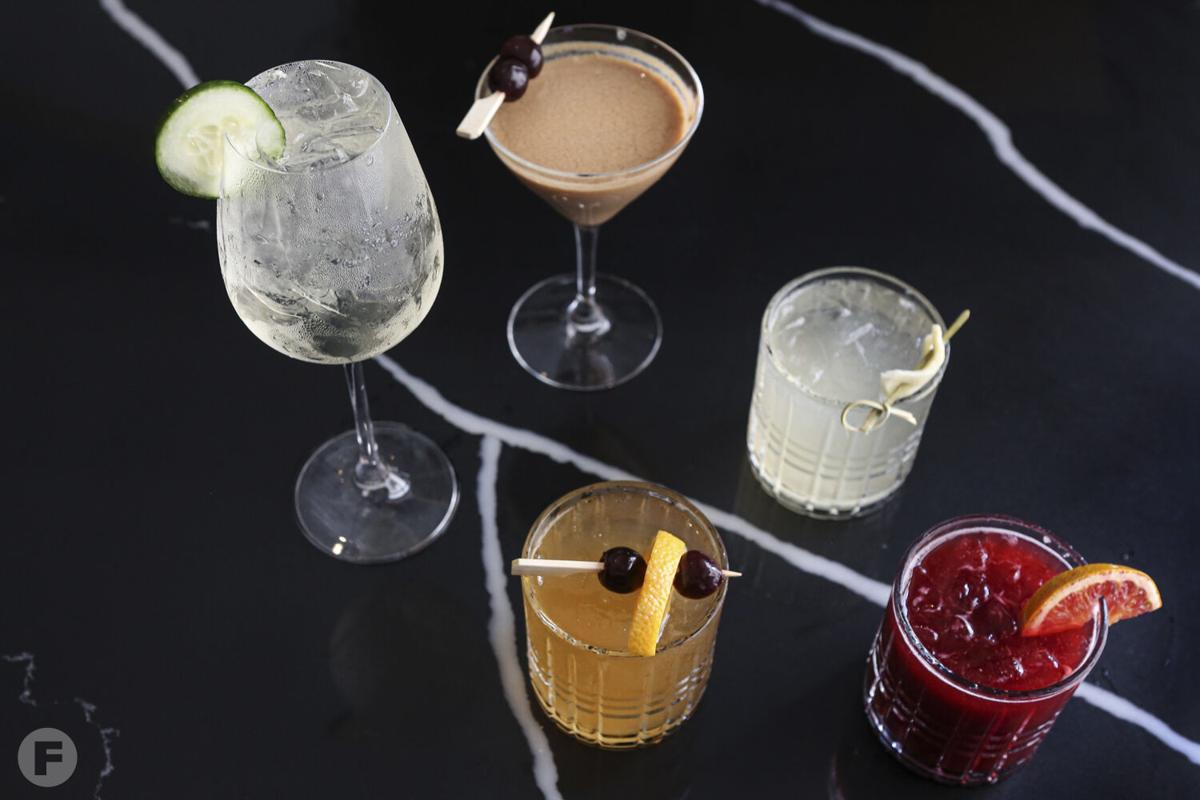 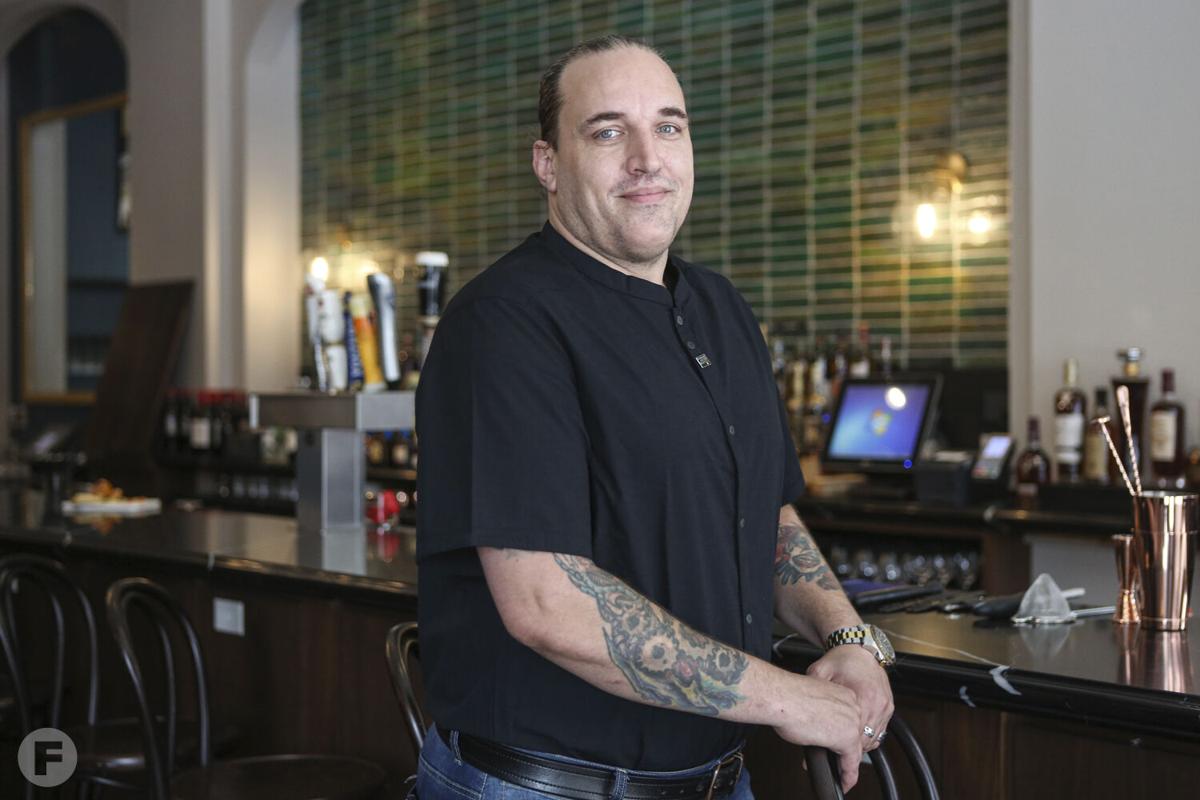 James Cassidy is the bar manager at Commonwealth. 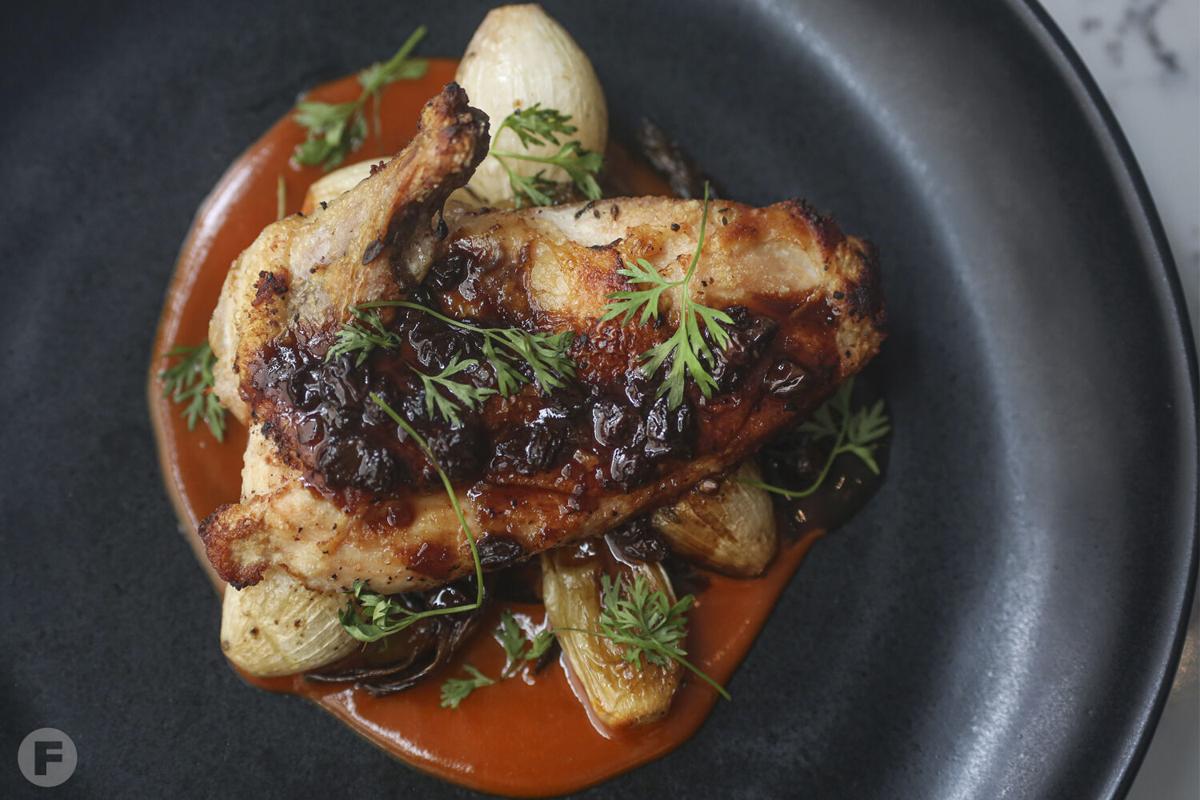 The Commonwealth roasted chicken breast is served with onion, a carrot-ginger emulsion and a Pusser's rum and currant demiglace.

St. Louis' Angad Arts Hotel is no longer without a signature restaurant.

The name Commonwealth represents the restaurant's mission to support the common good. The concept was originally meant to focus on the countries associated with the British Commonwealth, but it was adjusted when the team recognized the negative connotations.

"That's kind of the primary reason we went with just modern European," Corrigan says. "We were focused more on the spice trade, the different flavors you can get, the different spices that we could implement and all that, that's what we were focused on. And then, obviously, we started realizing the other part of it."

The European theme is clear throughout the menu, beginning with starters like the Camembert Brie wrapped in puff pastry and served with fig jam, local honey, marcona almonds and crostini or the Hungarian peach soup, served either chilled or hot with a chantilly cream. For your entrée, choose from selections like the veal ballotine with chard, mushroom duxelle, Peruvian potatoes and a mushroom-cognac demi glace or the cast iron scallops with an English pea purée, sea beans, saffron-poached fennel and a roasted apple beurre blanc. One of Corrigan's favorite dishes to develop was the tandoori duck breast, which is served with onions, a carrot-ginger emulsion and a Pusser's rum and currant demi glace.

"It's been recreated probably four or five times over," he says.

Another dish that took a long time to hammer down? The Starry Night. This eye-catching dessert features chocolate torte, chocolate creme patisserie and blueberry compote under a tempered chocolate dome before being finished with a mirror glaze that mimics the night sky. Because of that glaze, no two versions of the dessert are exactly the same. And if they run out for the evening, they won't be able to whip one up for you; the process to make these gems takes four days.

For those looking for an earlier meal, Commonwealth also serves a daily breakfast menu featuring a spin on a full English breakfast, a Croque Madame, breakfast lasagna and more.

The drinks side of the menu also carries a heavily European influence. On draft, you'll find imports like Stella Artois, Paulaner Hefeweizen and, of course, Guinness, alongside other bottled selections from around the continent. And on Cassidy's cocktail menu, expect to see similar influences in drinks meant to pair well with Corrigan's dishes.

"We created a bunch of great cocktails, some new stuff and then some reinvented things as well," he says.

His favorite – and probably Corrigan's as well – is the New World Fashion, made with Woodford Reserve rye, Peachtree, ginger beer, Grand Marnier and orange bitters; Cassidy considers it the first signature cocktail of Commonwealth. Other options include the refreshing Salad Spritzer, made with Pinot Grigio, ginger ale, St. Germain, Peachtree and a cucumber garnish, or the Berry Sour, which features hibiscus and cranberry purée, blood orange vodka and a splash of Luxardo. If you'd rather drink your dessert, go for the Chocolate Cherry – Old Forester, Godiva, PAMA pomegranate liqueur and a splash of Luxardo liqueur, served with a Luxardo cherry.

Those who visited the space in its Grand Tavern days will recognize a few elements left over, but for the most part, the restaurant has been fully refreshed. Custom dark-teal wallpaper with gold accents and velvet green chairs accent the space alongside what the Angad Arts Hotel is known for: art. Works from four local artists are currently on display – and all available for purchase – and will be swapped for fresh pieces in April 2022. Along with the artwork, guests can expect the restaurant's menu to soon start rotating quarterly.

Commonwealth is open daily for breakfast from 7 to 11am and for dinner Tuesday through Thursday from 4 to 10pm and Friday and Saturday from 4 to 11pm.

Gather, A Neighborhood Cafe, is serving up a fall menu of pastries and casual fare in McKinley Heights

The restaurant features a menu of thoughtful choices that cater mostly to parents.

On Black Friday, the brand will transition with a new brewing facility set to open this spring.

The best food and drink events in St. Louis this weekend: Oct. 22-24

Enjoy a spooky dinner party, celebrate a new Green Dining District or try some of the best chilis around town this weekend.

Jalea will bring Peruvian food to St. Charles this December

The Pervuian bistro from chef Andrew Cisneros and his family will feature dishes not often found in St. Louis.

The Starry Night is the crown jewel of desserts at Commonwealth, featuring layers of chocolate torte, chocolate crème patisserie and blueberry compote underneath a tempered chocolate dome finished with a mirror glaze.

James Cassidy is the bar manager at Commonwealth.

The Commonwealth roasted chicken breast is served with onion, a carrot-ginger emulsion and a Pusser's rum and currant demiglace.