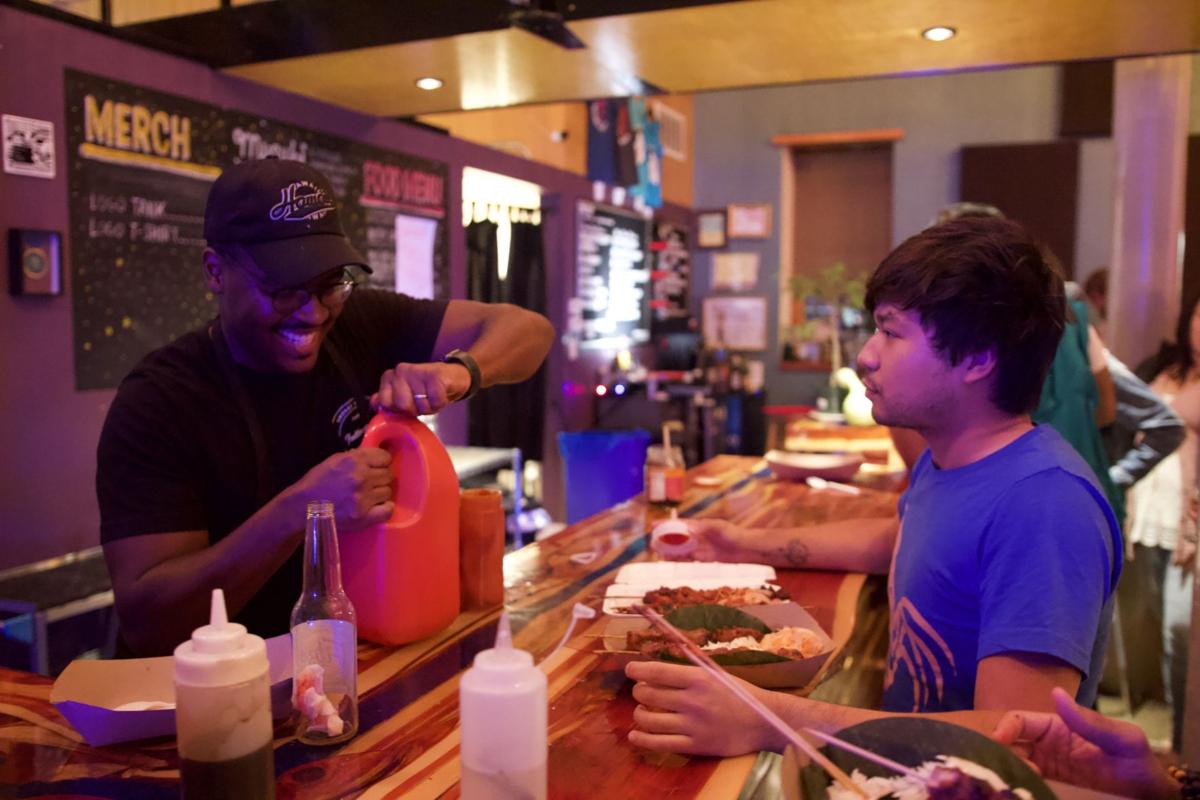 Darren Young serves up Filipino barbecue at The Fattened Caf's first pop up at Earthbound Beer. 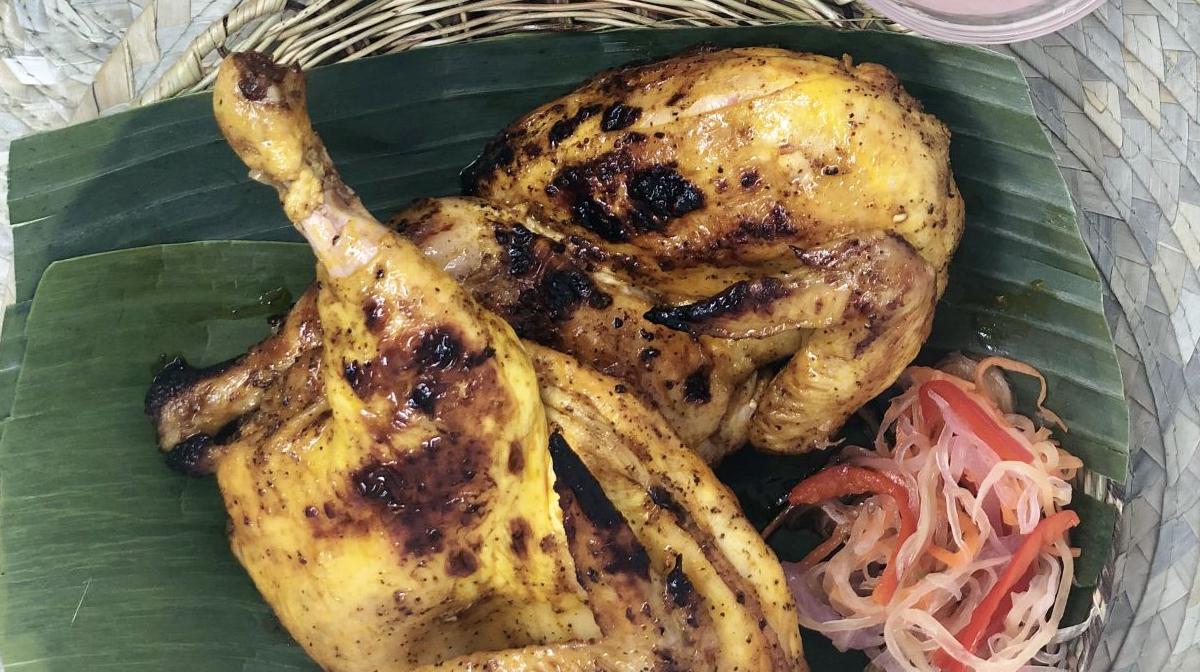 Unlike American barbecue, which is cooked low and slow, Filipino barbecue is cooked using direct heat. 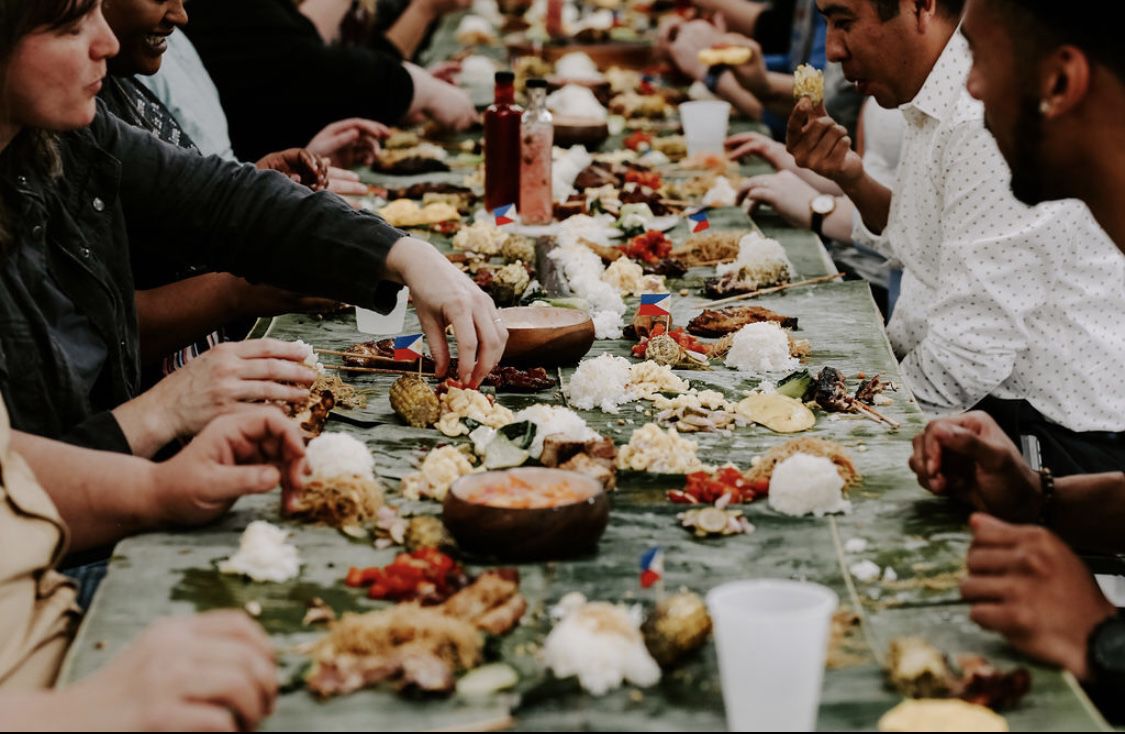 The Fattened Caf is planning a Kamayan celebration for the future, where everything is eaten using your hands and served on banana leaves.

Darren Young serves up Filipino barbecue at The Fattened Caf's first pop up at Earthbound Beer.

Unlike American barbecue, which is cooked low and slow, Filipino barbecue is cooked using direct heat.

The Fattened Caf is planning a Kamayan celebration for the future, where everything is eaten using your hands and served on banana leaves.

Starting Jan. 31, you can find Los Angeles transplants and husband-and-wife duo Darren Young and Charlene Lopez Young serving up their authentic Filipino food at the Cherokee Street brewery once a month. While their specialty is Filipino barbecue, guests can also expect a Filipino brunch in February and other specialties like a Kamayan-style dinner and possibly Filipino baked goods. They hosted a pop up at the brewery one other time last year.

Charlene says that the collaboration came together pretty simply; the couple lives on Cherokee Street with their eight-month-old daughter. The owner of one of the street's shops, The Bricoleur, suggested that they collaborate with Earthbound. At the time, they thought the brewery space was too big for then, until someone else suggested it a few months later.

"And then we were walking by Earthbound one day with our stroller and just said, 'Let's talk to whoever's in here.'"

After some emails and conversations, The Fattened Caf hosted a one-time pop up at the brewery.

"It was chaotic," Charlene says. They had 300 plates and sold out in three hours.

After the success of the first pop up, Earthbound asked if Darren and Charlene were interested, and they said, "Let's do it."

Charlene, who is Filipino, says that the pair is trying to replicate food that you would find on the streets in the Philippines.

"We stick to authentic flavors, and what you get on the corner of the street in the Manila," she says.

Darren explains that Filipino barbecue is different than American barbecue. Instead of meat being cooked low and slow, it's instead cooked with direct heat using charcoal. Charlene makes all of the sides: garlic rice, cucumber salad, pickled papaya (which is her grandmother's recipe) and pancit, their vegan option, which is rice noodles with stir-fried vegetables.

The two do not consider themselves chefs – they both have very different jobs working at nonprofits during the day – but through their food, they are trying to foster a sense of community, especially for those who are Filipino.

"I want Filipinos in the St. Louis community, or in Missouri, to have a place where they can find themselves, to feel like they're at home, to feel like they belong here," Charlene says. "When I feel like I miss my family in the Philippines, I know that I could cook myself some food and be right there with them."

Besides the residency at Earthbound, The Fattened Caf is planning other pop ups, so keep an eye on their Facebook page to see where to find them next.

Zenwich, an Asian-Inspired Sandwich and Ramen Concept, Opens in the Central West End in April