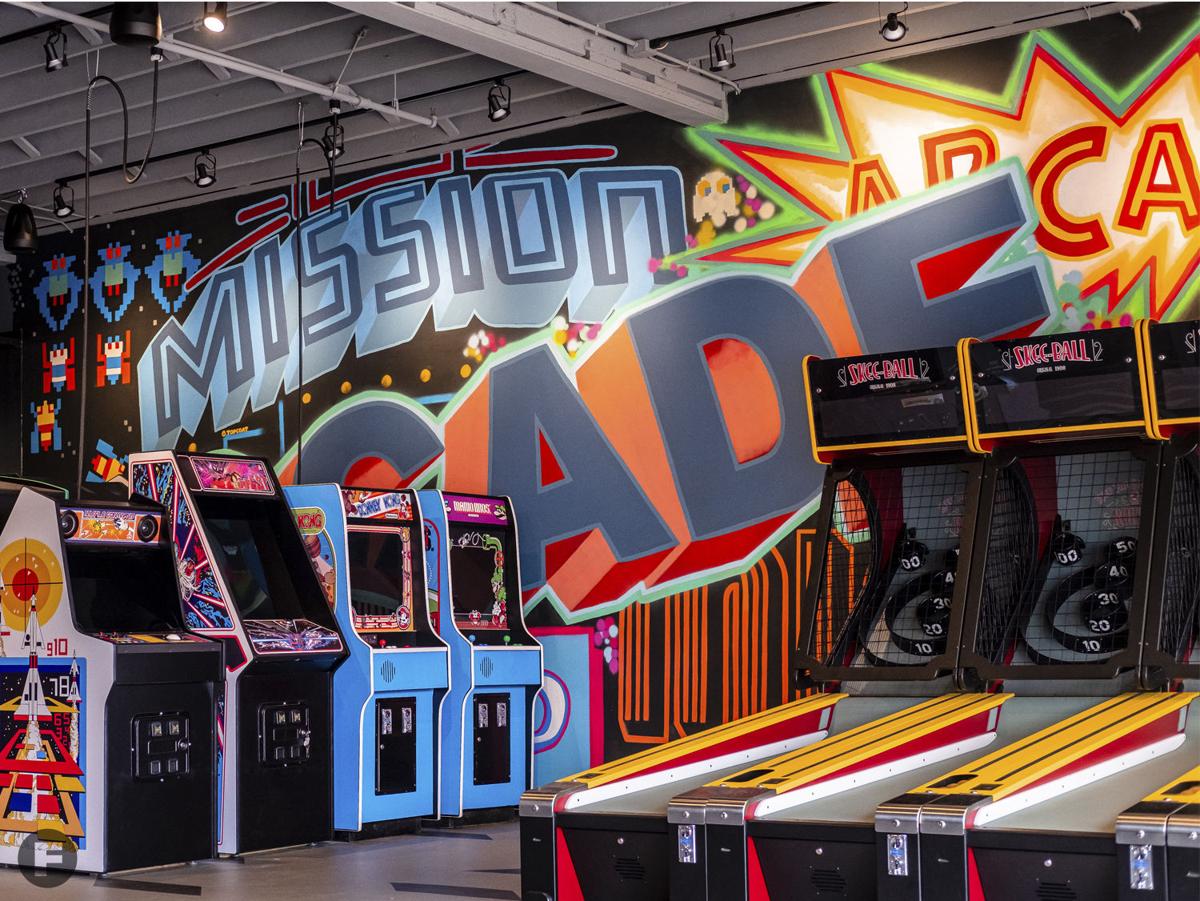 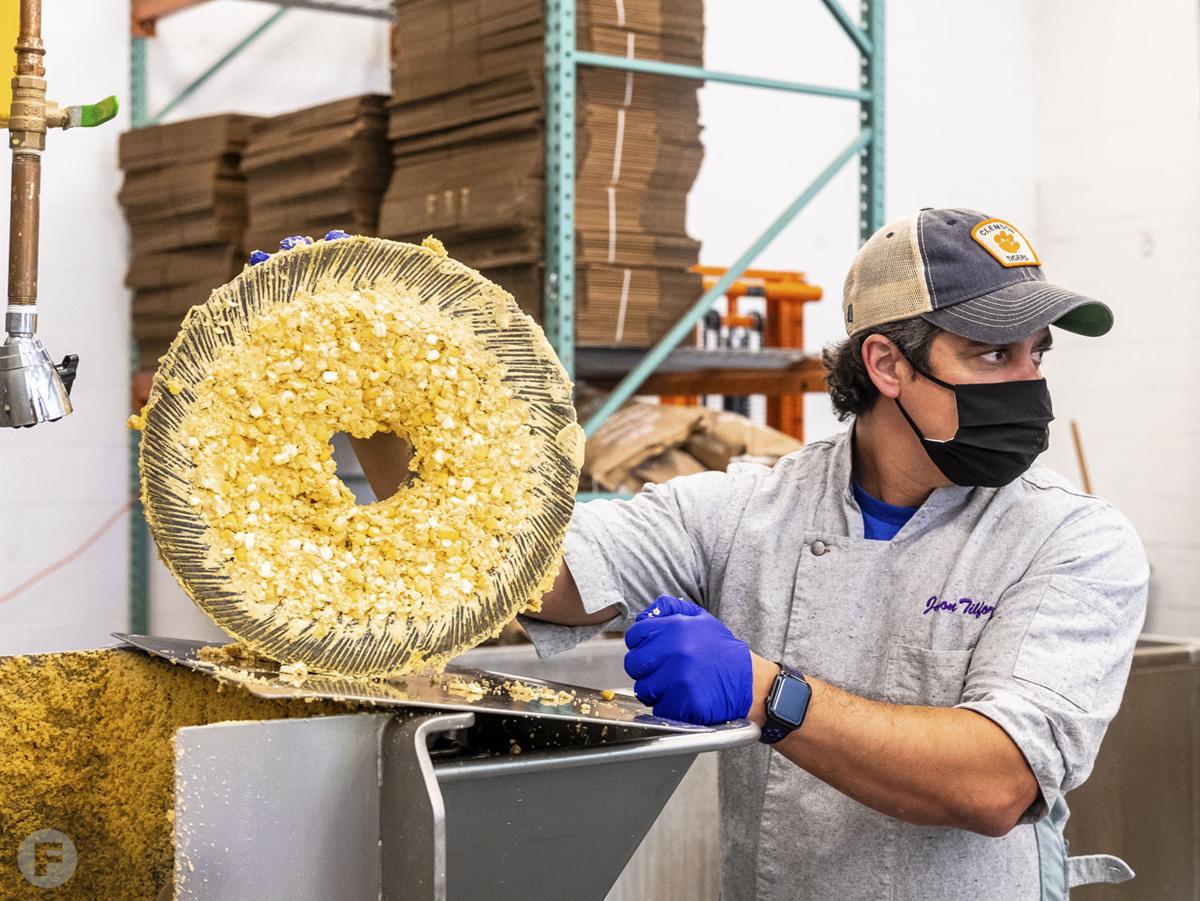 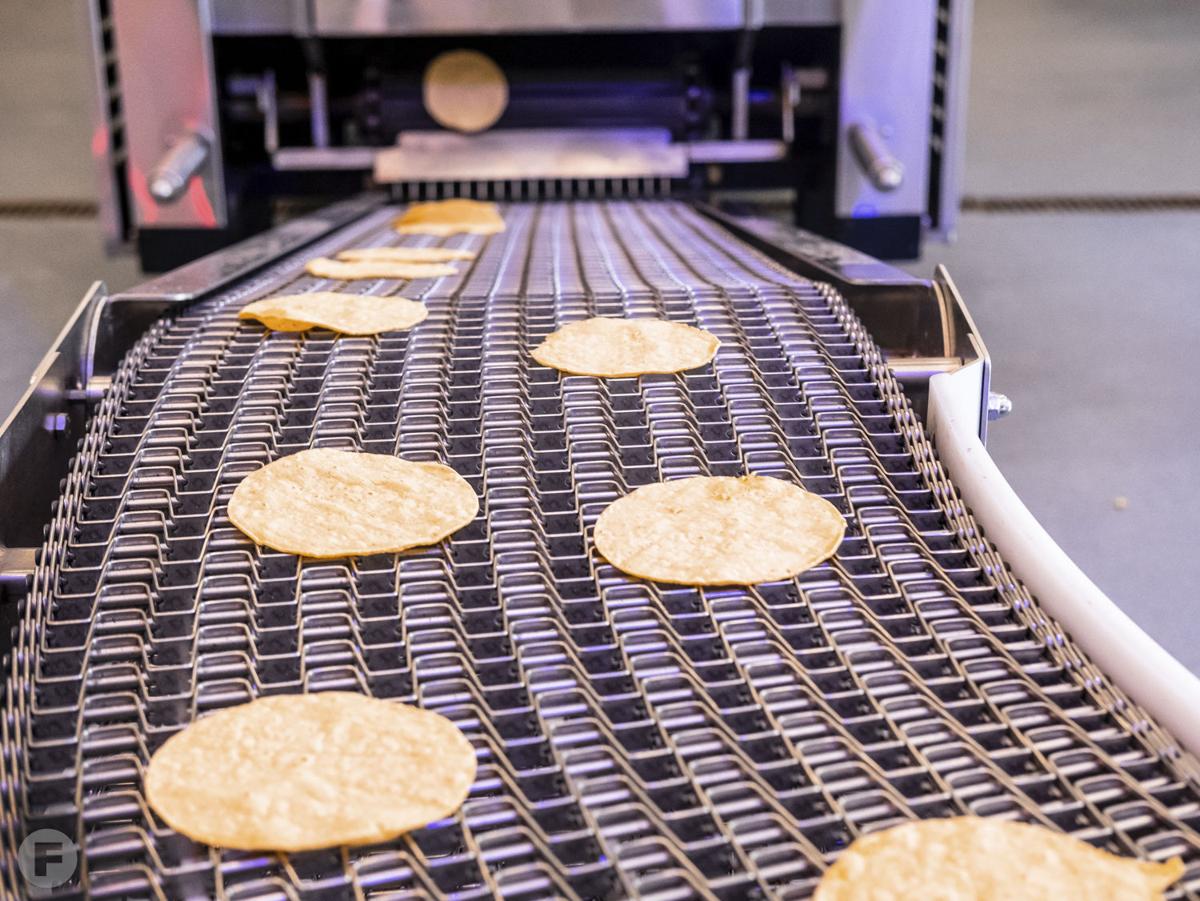 Tortillas come out of the oven at the new Mission Taco Joint location in Kirkwood. 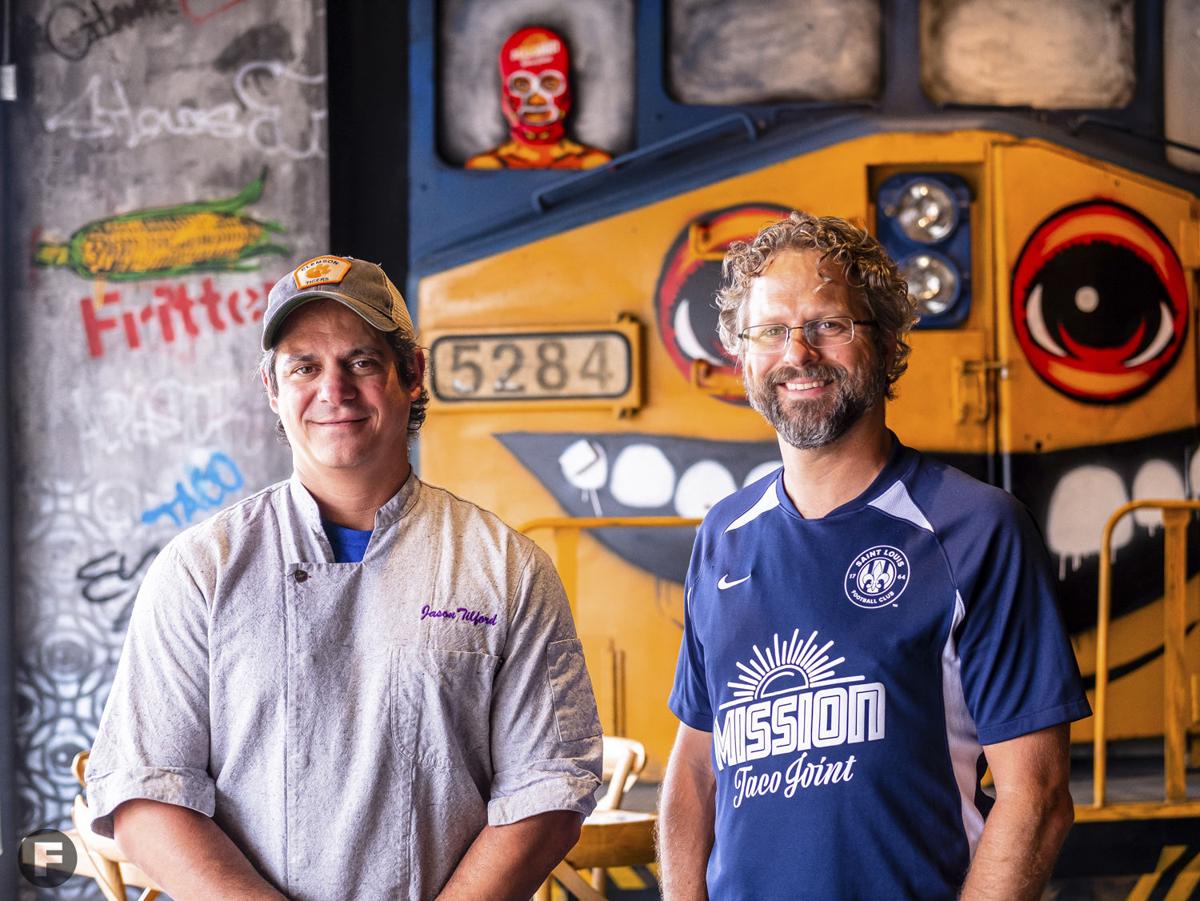 Jason (left) and Adam Tilford pose in front of a mural of a train at the Kirkwood location of Mission Taco Joint. 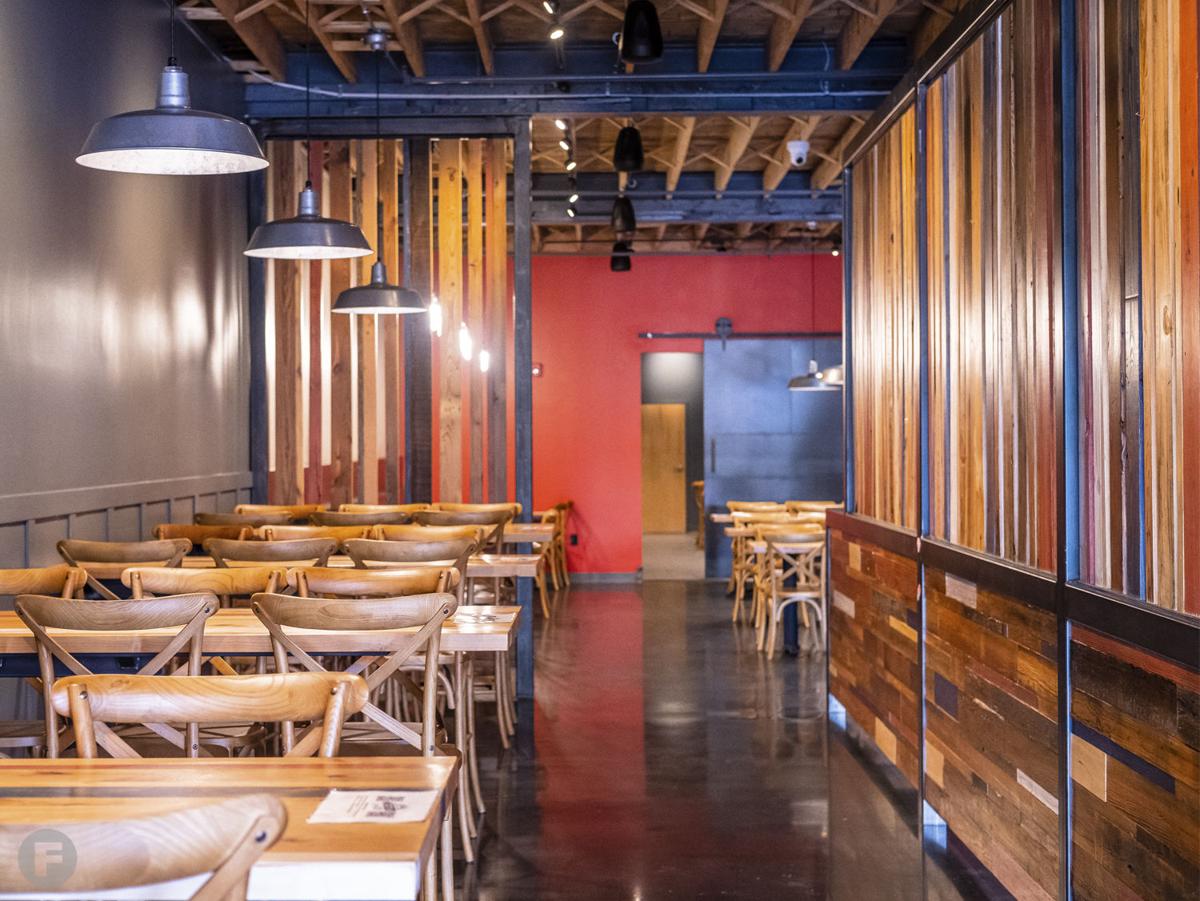 The dining room at the new location of Mission Taco Joint in Kirkwood, which will temporarily be limited to allow for social distancing.

Tortillas come out of the oven at the new Mission Taco Joint location in Kirkwood.

Jason (left) and Adam Tilford pose in front of a mural of a train at the Kirkwood location of Mission Taco Joint.

The dining room at the new location of Mission Taco Joint in Kirkwood, which will temporarily be limited to allow for social distancing.

One of Missouri's favorite taco joints adds to its empire.

Mission Taco Joint's seventh location – its fifth in the St. Louis area – opens in Kirkwood, Missouri, today. The new location features a typical dining area, a bar area packed with arcade games and an additional space where tortillas for all of its locations will be made.

Co-owner Adam Tilford says that the Mission Taco team has been looking at downtown Kirkwood as the destination for a new location for years. "It's got a good urban feel," says Tilford. "Good walkability, lots of shopping and restaurants. It's just really the perfect niche – the demographic for what we were looking for."

The new location previously housed Kirkwood Station Brewing Co., and, funny enough, Mission Taco Joint previously considered trying to sublease space from the brewery. That didn't work out, but when the building became available, Tilford says they jumped at the chance. "It was serendipitous," he says.

The restaurant will feature all of the dishes that Mission Taco Joint is known for, including the Brah'rito (carne asada, chile-rubbed bacon, smashed black beans, chile-crusted potato fries, Chihuahua cheese, crema and ancho chile sauce topped with guacamole and pico de gallo) and tacos ranging from spicy chorizo to Baja fish to portabella. You'll also find all of its signature cocktails, whether you're craving the classic Mission Margarita or its take on a Paloma.

The massive 12,000-square-foot space seemed a bit big for just the restaurant, but Tilford and his brother Jason knew they were quickly outgrowing their commissary space. So where brewing equipment once was, the restaurant's tortilla ovens now reside. The brothers also want to start producing their own brand of tortilla chips.

After setting up that space, the brothers had to decide how to design the 3,000 square feet in the front of the building. "We very quickly came up with the idea of this retro arcade," explains Tilford.

After spending a lot of time at arcade bar Up-Down KC, which also has a St. Louis location, the two fell in love with the concept.

"We're like, man, tacos and arcade games sounds like a good mix," continues Tilford. Expect to find Skee-Ball, pinball machines and several retro arcade cabins, as well as food from Mission Taco Joint's new test kitchen, which will use the arcade crowd to try new dishes before they're rolled out across all restaurants. Unfortunately, guests won't get to see those features in full swing until it is safe to do so.

For the time being, the Kirkwood location of Mission Taco Joint – along with the other St. Louis locations – will be taking on a slightly different service model: Mission Taco Lite.

The concept will temporarily transition all Mission Taco Joint locations into fast-casual restaurants. Instead of being served at their tables, guests will order at the counter, where a plexiglass divider will be in place to protect both staff and customers. Cocktail servers will circulate the limited-seating dining rooms to accommodate additional drink orders and other requests and to process payment after the meal.

"We will slowly start transitioning back to normal service as our staff feels comfortable," says Tilford. "If we're asking them to come back [to work], it's my duty to try to keep them as safe as possible."

Mission Taco Joint's Kirkwood location is open 4 to 10 pm Monday through Thursday and 11am to 10pm Friday through Sunday.