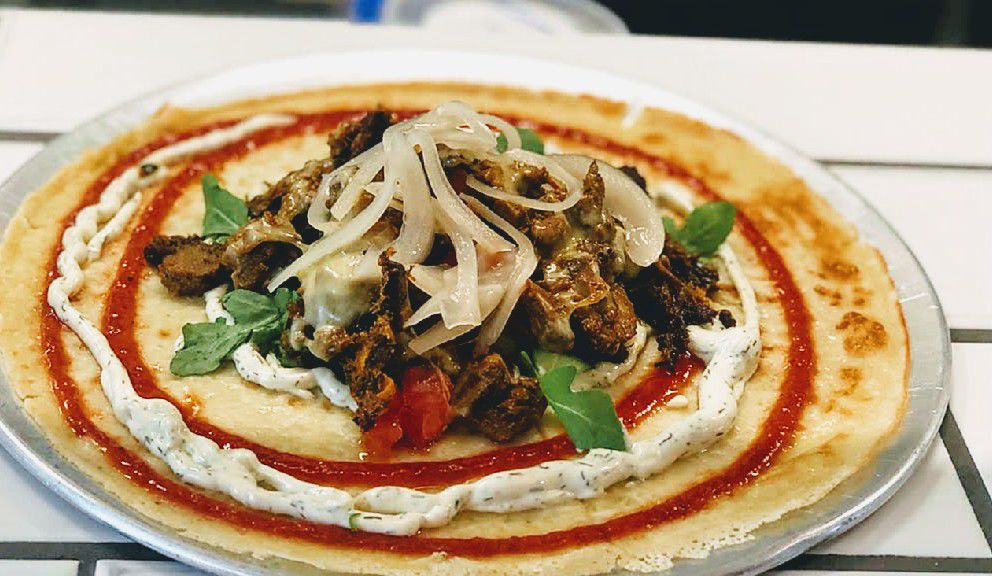 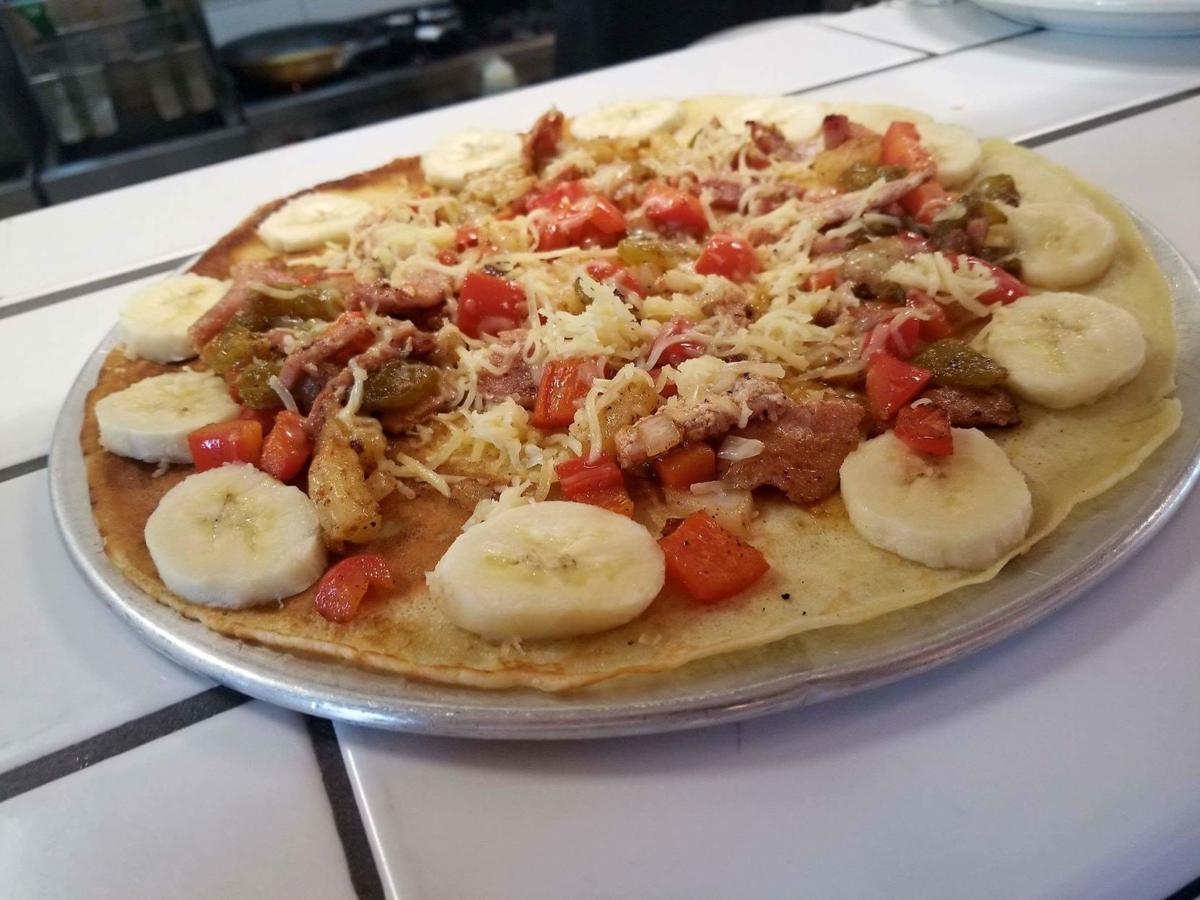 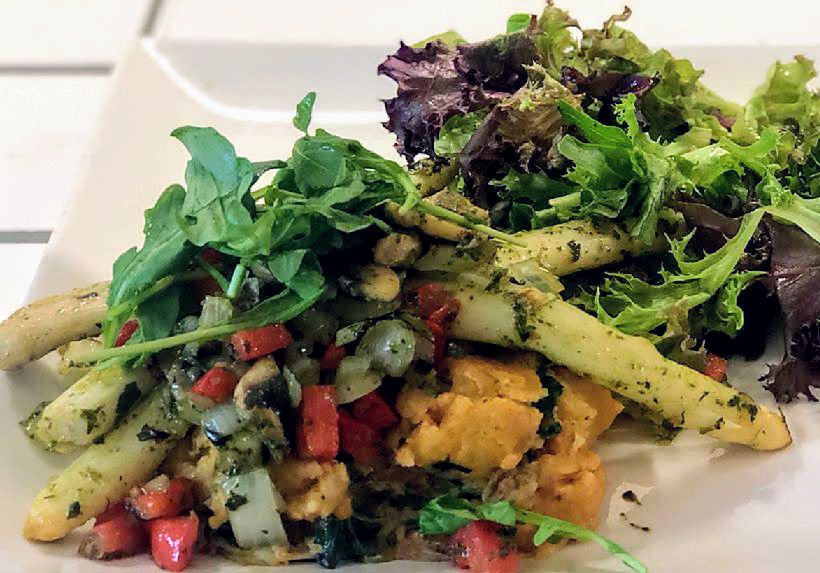 Liza’s Stamppot, true to its namesake, is a vegan and gluten-free stamppot iteration, with sautéed mushrooms and poached white asparagus over mashed frisée, leek and potato, topped with arugula and peppers, with a side of simple greens. 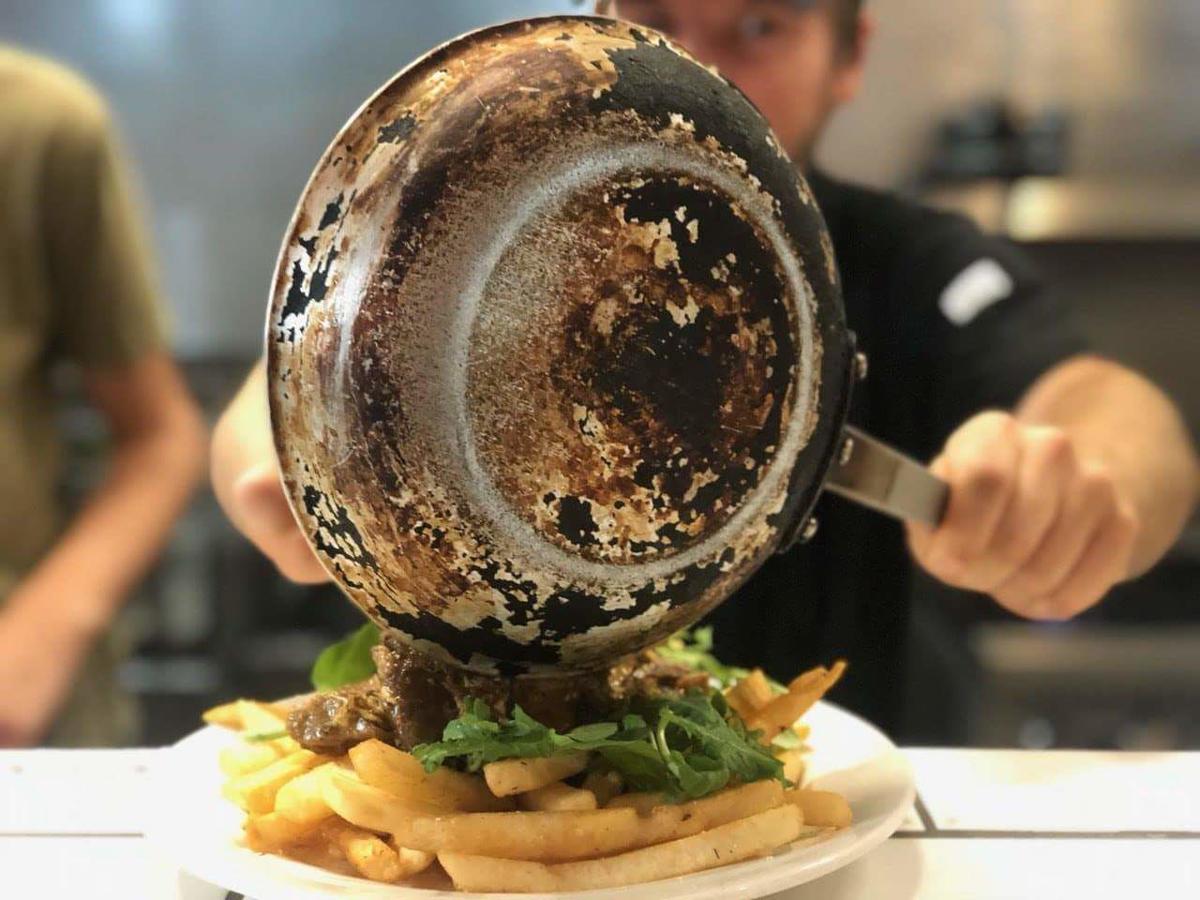 Although menu items are owner Joseph Gidman’s own new world-riff on Dutch cuisine, he employs a lot of traditional flavors at Van Gogh's Eeterie.

Liza’s Stamppot, true to its namesake, is a vegan and gluten-free stamppot iteration, with sautéed mushrooms and poached white asparagus over mashed frisée, leek and potato, topped with arugula and peppers, with a side of simple greens.

Although menu items are owner Joseph Gidman’s own new world-riff on Dutch cuisine, he employs a lot of traditional flavors at Van Gogh's Eeterie.

Van Gogh’s Eeterie, a Dutch-inspired restaurant on a culinary-centric stretch of Springfield, Missouri’s historic Commercial Street, opened this past spring, another foray into international cuisine by the mother-and-son pair also at the helm of nearby Chabom Teas & Spices and local fave Café Cusco, an upbeat Peruvian joint.

“It all stems from when I was an exchange student years ago,” says owner Joseph Gidman, on his family’s decidedly international epicurean focus. Gidman studied overseas in the Netherlands and also has a best friend who hails from Peru. “There was about a six-year period of my life where I lived and traveled overseas consistently. So both of these restaurants – I’m not Peruvian, I’m not Dutch – but they’re love letters to my friends and my experiences there, telling that story of places that were dear to me when I was living and traveling overseas.”

The earliest iterations of what would evolve into Van Gogh’s Eeterie began, quite authentically, in the Netherlands. “The idea started when I was an exchange student in Holland,” Gidman says. “I had a group of close friends who were Dutch, and we’d get together all the time, them and me and some other American exchange students, and we started having what we’d call Pancake Parties. It was kind of the one thing culturally we both did, but we did differently. We would make sweet American pancakes that were fluffy, with maple syrup on them, and they would make the Dutch crepe-style pancakes.”

Van Gogh’s Eeterie focuses heavily on the latter Dutch pancakes, or pannenkoeken, with both savory and sweet iterations. Other dishes have a strong Indonesian bent, a nod to the Indonesian influence upon Dutch culture as a colony of the Netherlands.

One such dish is Liza’s Stamppot, a savory dinner entrée named for Gidman’s friend who brought him around the Netherlands on a culinary scouting adventure prior to opening Van Gogh’s. The two stamppots, a traditional Dutch dish of mashed potatoes mixed with different types of sautéed vegetables, topped with meat or a brandy browning sauce – are among Van Gogh’s most popular menu options. Liza’s eponymous dish, true to its namesake, is a vegan and gluten-free stamppot iteration, with sautéed mushrooms and poached white asparagus over mashed frisée, leek and potato, topped with arugula and peppers.

Of course, the dish that started it all, the pannenkoeken, shines brightly on Van Gogh’s robust breakfast menu. Part of the learning curve for Dutch cuisine newbies is the pancake itself. “It’s a flat crepe style, so there’s confusion,” Gidman says, explaining the need to differentiate the Dutch baby, which is a German puff pastry, from the Dutch pancake. Van Gogh’s Eeterie offers savory Masterpiece Pancakes, such as the Rotterdam, which features shawarma beef, lettuce, cucumber, creamy garlic dill and curry ketchup, as well the Aruba, with bacon, banana, jerk-seasoned peppers, onions, raisins, pineapple and melted Edam cheese.

Dessert pancakes are all topped with a scoop of vanilla bean ice cream and include Gidman’s riffs on his old favorites, such as Death by Dark Chocolate, a pancake made with double-Dutch cocoa, served with hagelslag (essentially, sprinkles) and chocolate sauce.

Although menu items are Gidman’s own new world-riff on Dutch cuisine, he employs a lot of traditional flavors. “There are a lot of spices and flavors that people recognize that they can’t put their finger on because it’s these old-world spices that maybe your grandmother or great-grandmother used – nutmeg or mace or fennel or tarragon – something that’s not as commonly used today,” he says. “Those are our flavors. They’re old flavors… reinventing those for them.”

Gidman reports steady and enthusiastic patronage since the restaurant’s opening, with more to come in the weeks to follow: New menu items will be rolling out soon, such as rendang, a spicy dish cooked in Indonesian red chile and coconut cream sauce. Currently, Gidman is working on expanding his beer and wine license into a full liquor license, replete with European-style cocktails and beers.