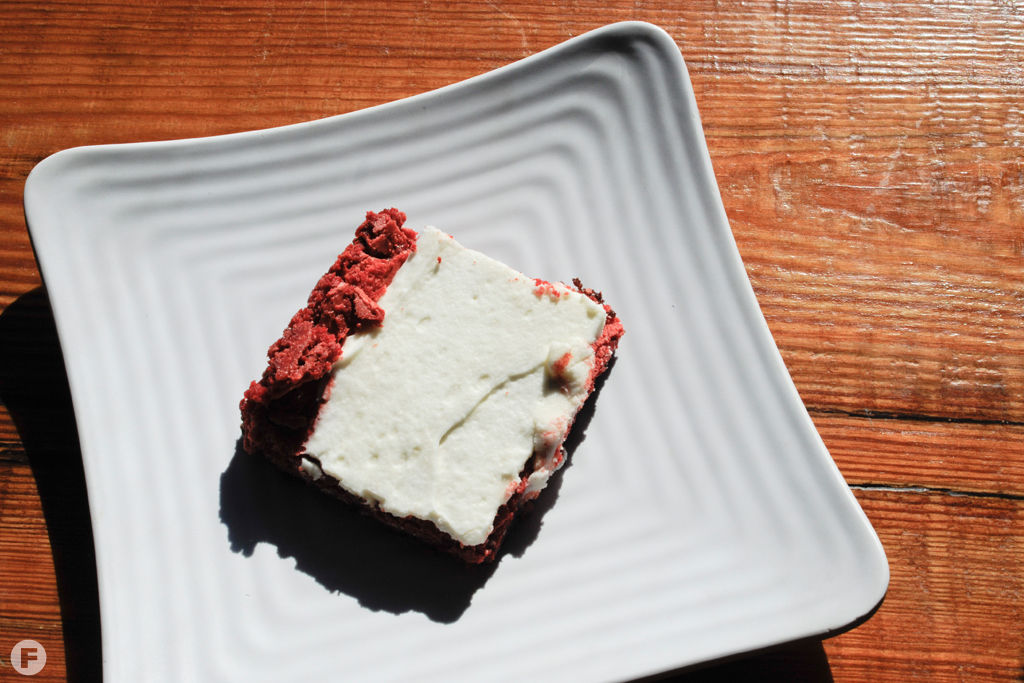 Red velvet cake is just one of what is now 73 gooey butter cake varieties made by Ann & Allen Baking Co. 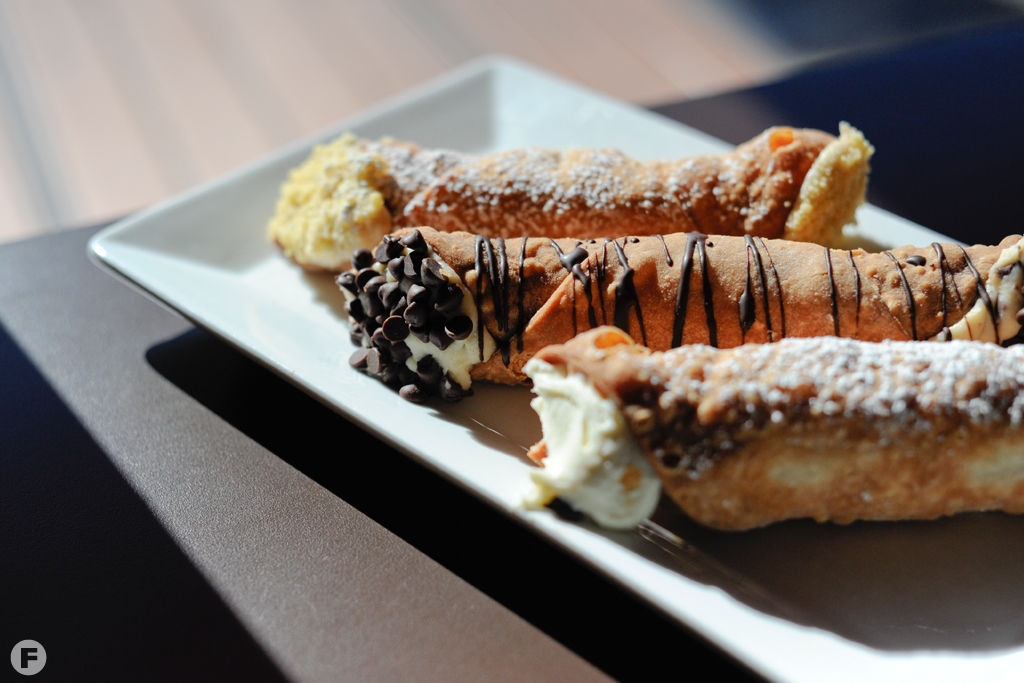 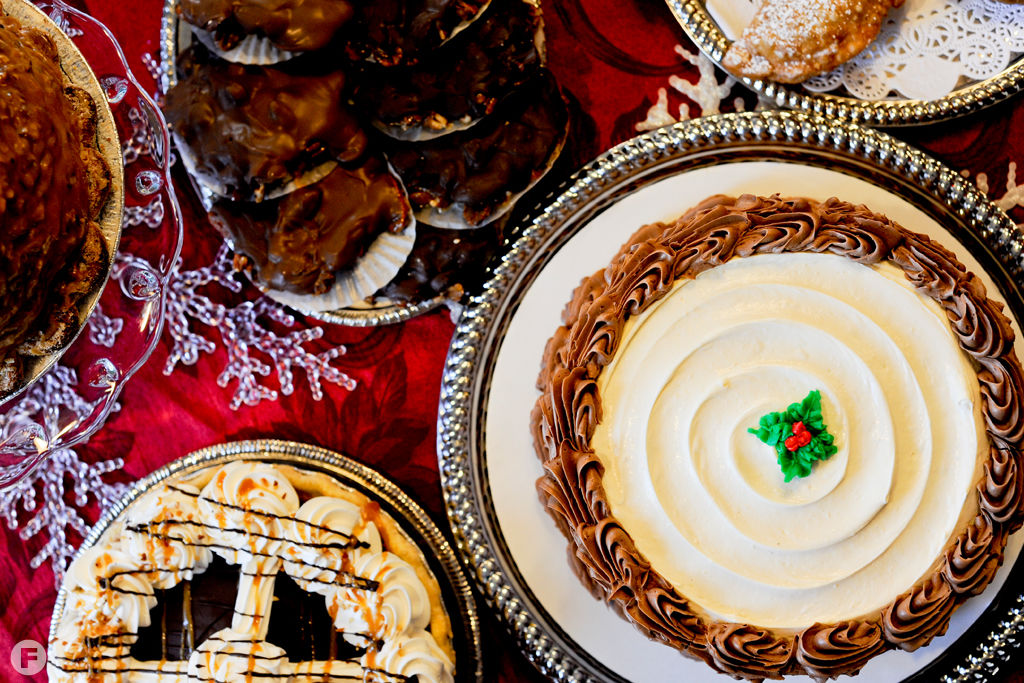 For the uninitiated: Gooey butter cake, according to local lore, was the result of a baker’s mix-up, accidentally swapping the flour amount with the sugar measurement. The resulting confection hits the sweet spot between coffeecake and pound cake, with a rich, buttery flavor, gooey texture and requisite powdered-sugar dusting. Park Avenue Coffee roasters and coffee shop and its sister baking company, Ann & Allen Baking Co., make some of the best in town and received acclaim from national outlets including Food Network, Travel Channel and the Today show.

“My mom’s gooey butter cake recipe started out with yellow cake mix, and there was a lot of crust with just a little bit of filling in the middle,” says founder and chief executive officer Dale Schotte, who owns both companies with his sister, Marilyn. “When we started doing this, I’m like, ‘We need to have only enough crust to hold the filling,’ because really it’s all about the gooey part. To me, this is what makes it more moist, more gooey – more of the better part of the cake.”

Served at all six Park Avenue locations across town, as well as wholesale at Straub’s and Fields Foods, Ann & Allen was founded with the original “Mom’s Traditional” flavor and a chocolate version. It has since expanded to more than 70 gooey butter varieties – from white chocolate-raspberry to turtle to red velvet or lemon-blueberry – which also are available to be shipped across the country. In December, peppermint bark, gingerbread and butter-pecan pie flavors are the biggest hits, according to Schotte.

In addition to a rotating flavor selection of the St. Louis staple, Park Avenue serves an array of bakery items like scones, muffins, cookies brownies and sweet breads. And of course, while you’re grabbing something sweet, opt for a cup of its signature coffee- or espresso-based drinks or even a more substantial meal like salads, quiche or grab-and-go sandwiches.

“People in St. Louis grew up with gooey butter cake as a breakfast item, like a Danish or donut, whereas most people who aren’t from St. Louis feel it’s so sweet that it’s a dessert-type item,” Schotte says. “So it fits both molds of the morning aspect with great coffee and great gooey butter cake together, and also when you want a sweet treat in the afternoon or an after-dinner dessert.”

Treat yourself and feel the amore at Piccione Pastry, which describes itself as a “late-night pastry shop that embraces the time-honored traditions in Italian baking.” Located in the bustling, dining district The Loop, Piccione opened in 2013 but has a history with the area going much further back – 100 years or so, in fact. Grace “Nonna” Viviano Piccione, whose surname means pigeon in Italian, and her family were prominent in The Loop’s early theater development in the mid-1900s.

“My father named Piccione after his grandmother and opened here five-and-a-half years ago because of The Loop’s influence on our family and because of the opportunity he saw to revitalize the area,” says front-of-house manager Ricky Nix. “We’re mainly an Italian bakery – for people who crave good Italian pastries and authentic Italian baking.”

The shop’s wares include its best-selling cannoli: The flaky fried shells are filled with traditional ricotta filling, plus a lighter and sweeter signature version. Piccione also sells flavored cannoli such as gooey butter cake, chocolate chip, Marsala black cherry and pistachio. Plus, around the holidays, you can order a $15 do-it-yourself mini cannoli kit that comes with empty shells, a piping bag of filling and various toppings and sprinkles.

Bring your buon appetite with you: Other small-batch, scratch-made indulgences at Piccione include gelato, cookies like orange-pistachio shortbread and raspberry thumbprints, and pastries and cakes like flaky sfogliatella riccia and 80-proof Bundt cake in rum or chocolate-vodka flavors. And the Piccione family wants to ensure you don’t leave hungry – also on offer are Italian brunch and lunch favorites such as bomboloni (yeast-based donuts), ricotta pancakes, pizzettes and paninis.

You know the saying “your eyes are bigger than your stomach”? Well at The Blue Owl Restaurant and Bakery, even just a slice of its mile-high pies might be bigger than your stomach – but don’t let that stop you. The charming lunchtime favorite is located 30 minutes south of Downtown in Kimmswick, Missouri, and is best known for its award-winning Levee-High Caramel Apple Pecan Pie. This towering treat is made with 18 whole apples, sits 9 inches tall, weighs in at a whopping 10 pounds and has received nationwide nods from Oprah to Food Network to The Wall Street Journal and Forbes magazine (also available to purchase frozen online).

“Our bakery is one of our greatest draws,” says Mary Hostetter, who’s owned The Blue Owl for 33 years since starting it out of her home in the early 1980s. “It’s amazing to me; when people come from other states and countries, they show me the list of the things they want to do in St. Louis, and we’re at the top of that list! People love coming to the beautiful, historic river town of Kimmswick.”

Really, you can’t go wrong with any of the more than 25 different fresh-from-scratch, housemade options. Hostetter, an ebullient presence in her floor-length blue apron bustling around the busy dining room and breezy covered veranda, recommends her pastry tray – the dessert assortment that started it all in her home bakery – plus fried hand pies, Snickers bar pie, chocolate-amaretto dobash cake, caramel-turtle-pecan cheesecake, coconut cream pie, chocolate passion cake, three-layer carrot cake – and the list goes on.

“There are so many different choices you can have when you come to The Blue Owl… that’s the hardest thing for people, to make up their mind about what they’re going to have,” Hostetter says with a laugh. “But you always, always have to save room for dessert.”

The Blue Owl also serves country-style breakfast and a sizeable lunch menu, of which Hostetter  recommends the tossed strawberry salad, white chili soup, daily quiches, a chicken salad croissant (made with her granny’s recipe), corned beef eye of round Reuben and much more.

This time of year, we’re often looking for sugar and spice and everything nice, and on that front, St. Louis has plenty of ways to fulfill your sweet dreams.

Around the holidays, we’re often looking for sugar and spice and everything nice, and on that front, St. Louis has plenty of ways to fulfill y…