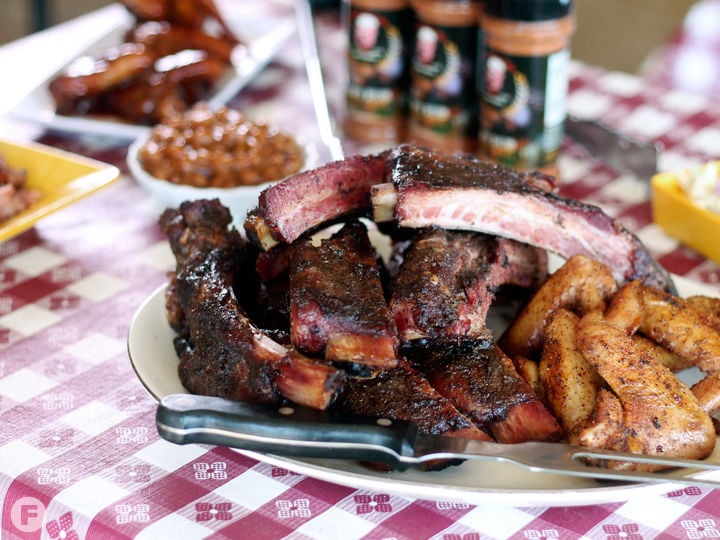 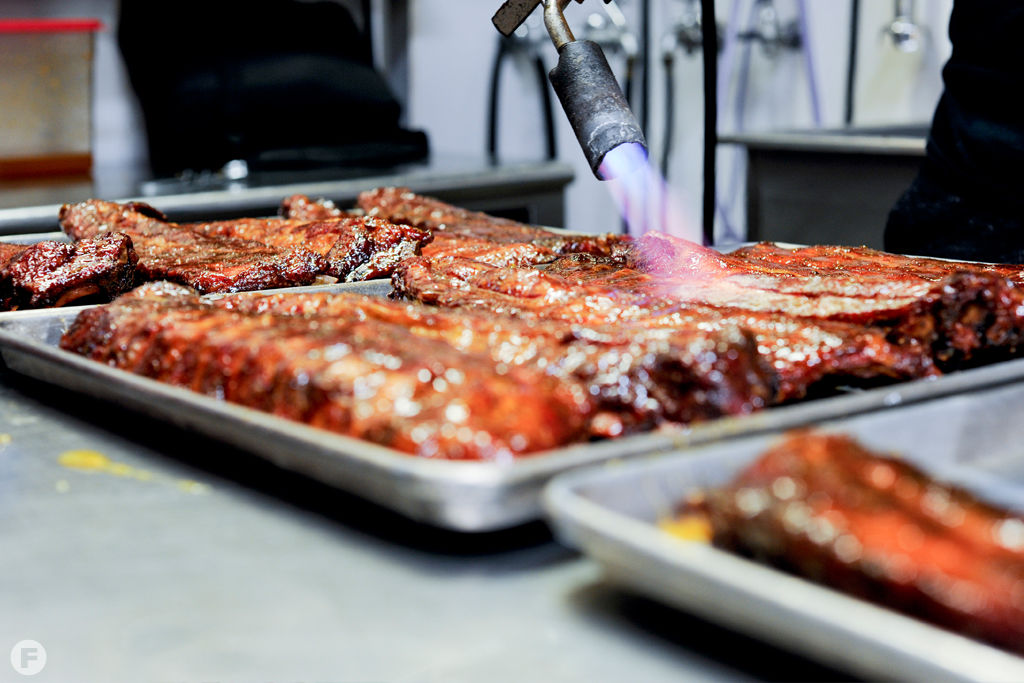 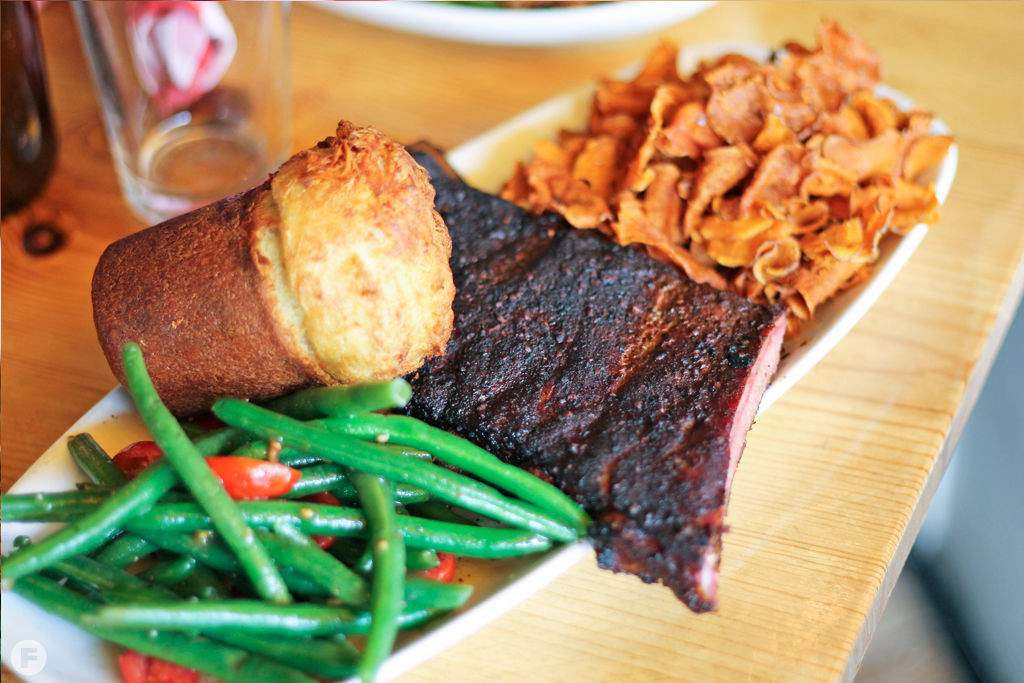 Although there’s no exact definition, St. Louis-style barbecue is often associated with racks of sauced sweet-heat ribs cut in our city’s eponymous style; thick pork steaks; and local takes on traditional styles such as smoky, charred-edge brisket and piles of pulled pork on a bun.

In some circles, Roper’s Ribs is a household name, and to others, it’s a hidden gem in North County. Open since 1976, the intimate, carry-out spot hand-rubs meat with its own house blend (which you can purchase online and in-store) and smokes it for 12 hours over hickory wood. The resulting flavor of the tender, smoked meats has drawn both local and national figures (including awards and visits from comedians like Steve Harvey, professional athletes, musicians, fashion designers and more). Caterers-turned-restaurant founders Carl and Denise Roper, as well as their daughters, welcome anyone and everyone into their storefront.

“We call it St. Louis-style barbecue,” Toni says. “I think St. Louis style is a combination of many people’s different styles and cultures of cooking that they grew up with... there’s a lot of soul in St. Louis style.”

Roper’s serves three types of ribs – beef, St. Louis-style and baby back – plus pulled pork, beef brisket, smoked chicken wings, burnt ends, jumbo fried shrimp and more. The meat is served wet but can be plated dry if that’s your preference, and Roper’s can also apply a dry-rub, which is more typical in Memphis and down south.

Another highly regarded and oft-recommended spot in town is Bogart’s Smokehouse, whose barbecue is prepared in that dry-rubbed Memphis style, especially its best-selling smoky-sweet loin-back ribs. The Soulard barbecue joint, from the owners of Pappy’s Smokehouse (another longtime favorite with a loyal following that just celebrated 10 years), sells out every day, and for good reason.

“A lot of times when people ask what our secret is – ‘How do you do your brisket or your ribs?’ – our response is always low and slow,” says Bogart’s partner and manager Michael Macchi. “Take your time. Don’t rush anything.”

Burnt ends, pastrami, tri-tip sirloin and tender beef brisket are all expertly prepared in the smoker out back. Save room for the sides – deviled-egg potato salad, pit beans (cooked underneath the brisket overnight) and Fire and Ice Pickles are sleeper hits.

You’ll be able to smell Salt + Smoke about 200 feet before you walk through the door. The full-service barbecue restaurant has a shared emphasis on barbecue, bourbon and beer and claims to “treat meat right.”

“We pull most of our influence from a Texas-style of barbecue, but one thing that sets us apart from a lot of barbecue places is that we’re a full-service restaurant,” says owner Tom Schmidt. “You sit down, a server takes care of you and you can get a nice cocktail – all of these service-oriented aspects of a restaurant are integrated with great, traditional barbecue cooking techniques.”

Highlighting that mission is a menu of cherry wood-smoked St. Louis-style ribs, pulled chicken and pork, and best-selling sliced brisket served on a platter with white Cheddar-Ritz cracker mac ‘n’ cheese, coleslaw and a mammoth Cheddar-bacon popover (versus the more traditional sliced white bread or cornbread). Along with 250 whiskeys and 60 beers, Salt + Smoke also serves creative comfort food dishes like a fried jalapeño-Cheddar smoked and pan-fried bologna sandwich with chowchow, as well as burnt-end toasted ravioli, a smoky twist on a classic St. Louis delicacy.

“The biggest calling card for us is the brisket,” Schmidt says. “We only source prime meat, we smoke it over post oak for 16 to 18 hours and it falls apart when you look at it. We use the whole brisket: So we have burnt ends, the point – or the fatty side – in addition to the flat, or lean side.”

The flagship Salt + Smoke location opened in the Delmar Loop in 2014, and its success led to the much-anticipated second location opening in South City in fall 2017, with a third planned for historic downtown St. Charles later this year.

“Barbecue has obviously been around St. Louis for hundreds of years; it’s not a new thing, but I think Pappy’s brought it more to the foreground of the St. Louis dining world 10 years ago and really elevated our status in the country and world for barbecue,” Schmidt says.

“But since it really only found that footing 10 years ago, there’s still so much exciting new stuff and so much more room for cool, great restaurants and different styles of barbecue. The scene just keeps growing and growing, and the more it does, the more it cements St. Louis as this amazing barbecue town.”

Macchi, of Bogart’s, agrees. “People talk about Kansas City or Memphis barbecue, but I’ll put St. Louis’ barbecue scene up against any of them any day of the week.”

We’ve seen a surge of new barbecue joints open, joining ranks with the longstanding titans in town. From updated takes to classic ‘cue, we exp…