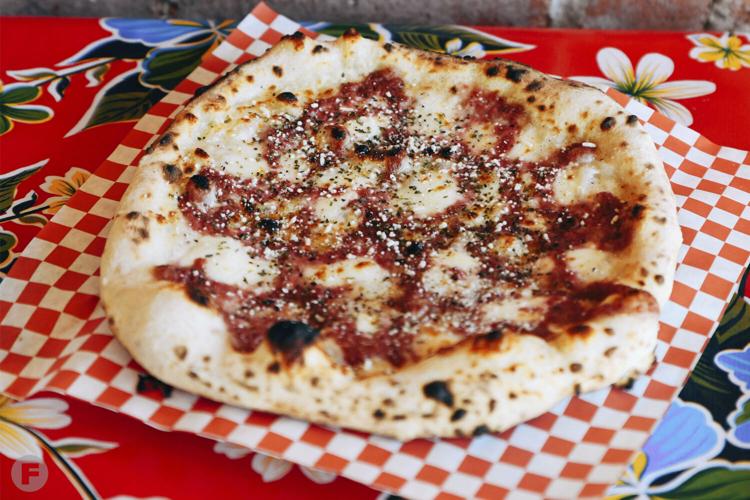 All of the pies at Stag Pizza start with a sourdough crust. 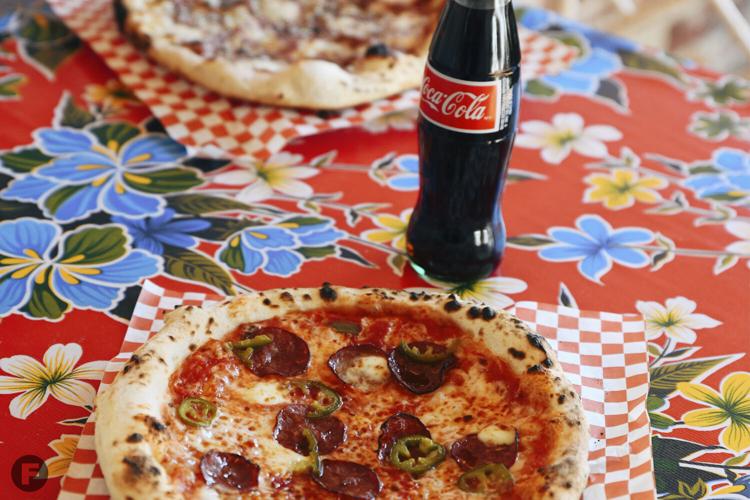 Albarelli adds jalapeños and hot honey to his pepperoni pies. 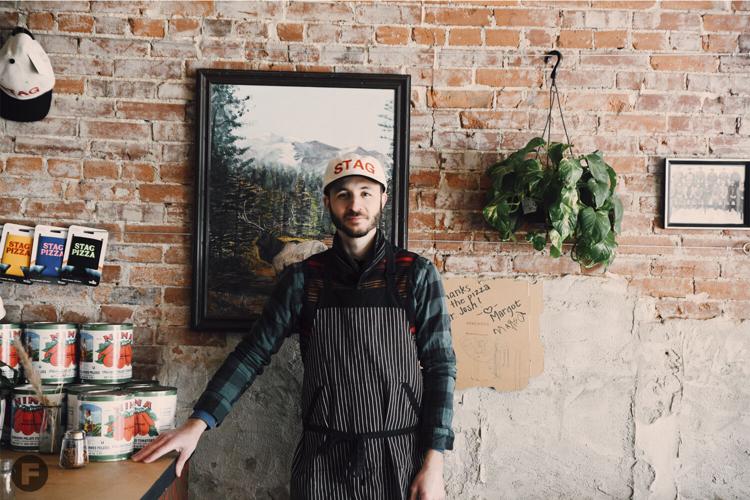 Josh Albarelli is the chef-owner of Stag Pizza. 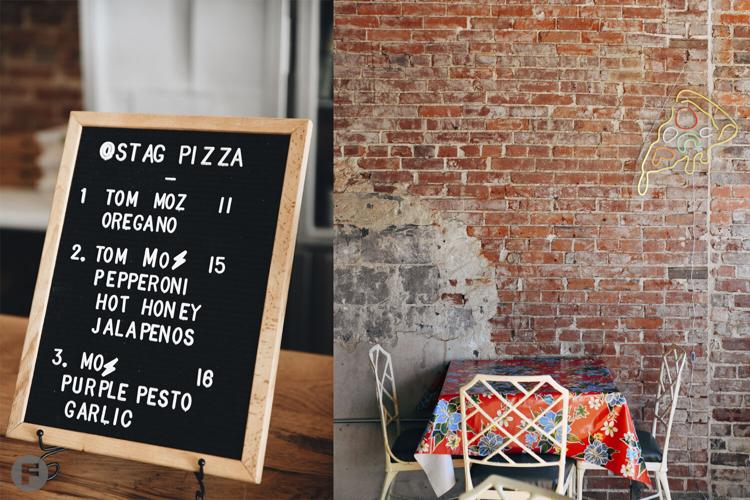 Offerings change based on when you pay Stag Pizza a visit. 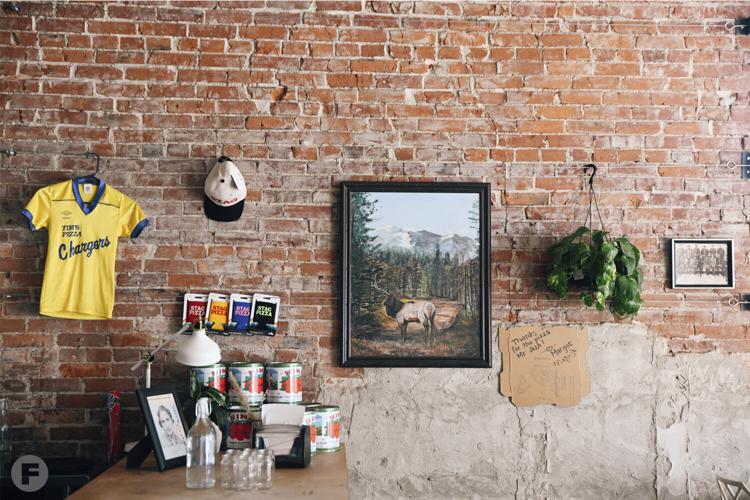 The stag moniker draws from the coat of arms of Josh Albarelli's ancestral hometown.

Josh Albarelli is seemingly always on the move.

For many in Kansas City, Stag Pizza has been impossible to miss. The small white and teal pizza trailer with its distinctive red “STAG PIZZA” sign has been making the rounds throughout town for several years, popping up outside of breweries and at street festivals – and even the occasional private party or two – serving delicious sourdough pizzas made from scratch.

If you ask Albarelli, he’ll tell you pizza is in his DNA. His great-grandfather came to the United States from Cervinara, Italy, a small town about an hour’s drive from Naples, the birthplace of pizza. His parents had recently reconnected with their roots during a trip to Cervinara, so when concepting names for his food truck, he was drawn to the town’s coat of arms, which prominently features a stag.

Around the same time as this trip, Albarelli was reconnecting with his roots in his own way. Equipped with a sourdough starter, a copy of “The Elements of Pizza” by Ken Forkish and an appetite for simple, fresh and authentic Neapolitan-style pizza, he soon became engrossed in this “pizza experiment.”

“I started the sourdough process really soon after getting into pizza and got hooked right away,” he says. “I love the idea of curating such a dynamic living thing. It changes with the seasons. It's completely defined by it's time and place – the bacteria from the wheat, your hands, the temperature in your kitchen, even the air in the specific location in which you're working.”

For Abarelli, tweaking variables in the pizza-making process to achieve the “ideal fermentation” started him on the journey to where he is today. Nowadays, he can make up to 100 pizzas over the course of a weekend.

“Humans have been curating wild fermented foods since as far back as we know,” he says. “Every single batch is slightly different based on those variables, which is inspiring and intimidating. For someone like me that's never satisfied, it's a perfect process.”

Opening in late 2019, the timing of Stag’s opening was serendipitous. As a mobile, outdoor pop-up, Stag Pizza was seemingly the safest pizza option in Kansas City. Abarelli was quick to adopt online ordering to limit contact during COVID’s earliest days, which still helps to manage the queue during his busiest rushes. He’s consistently popped up outside of many of Kansas City’s most renowned restaurants, breweries, distilleries and wine shops, including The Campground, Alma Mader Brewing, BKS Artisan Ales and Big Mood Natural Wines.

“Obviously, the outdoor nature of food truck life is super resilient,” Albarelli says. “I took off a month or so when the pandemic first set in, but then got right back out and starting slinging pies once people adjusted to the situation.”

For the most part, his techniques mirror those of traditional Neapolitan-style pizza makers. The pizzas are shaped by hand. They’re thin in the middle and made in a piping hot oven. The number of ingredients is kept to a minimum. However, by using naturally-leavened sourdough and getting creative with the toppings, Abarelli chooses to identify his pizzas as uniquely American.

If you order from Stag pizza, you can find some non-traditional toppings alongside the usual classics. For instance, the pepperoni pizza can be accompanied by some jalapeños and a drizzle of hot honey, and the beet-stained purple pesto pizza might require a double take. He’s topped barbecue pizzas with pickles, corn and bacon pizzas with lime crema and yes, pineapple even has a time and place on his pies.

To weather the winter months, Stag Pizza operated out of PH Coffee in Abarelli’s home neighborhood of Pendleton Heights in North Kansas City this past winter. While he’s admittedly looking for a more permanent space eventually, for the time being, he’ll keep slinging pies for anyone looking for a uniquely delicious pizza experience around town. 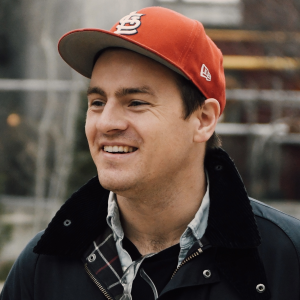 All of the pies at Stag Pizza start with a sourdough crust.

Albarelli adds jalapeños and hot honey to his pepperoni pies.

Josh Albarelli is the chef-owner of Stag Pizza.

Offerings change based on when you pay Stag Pizza a visit.

The stag moniker draws from the coat of arms of Josh Albarelli's ancestral hometown.