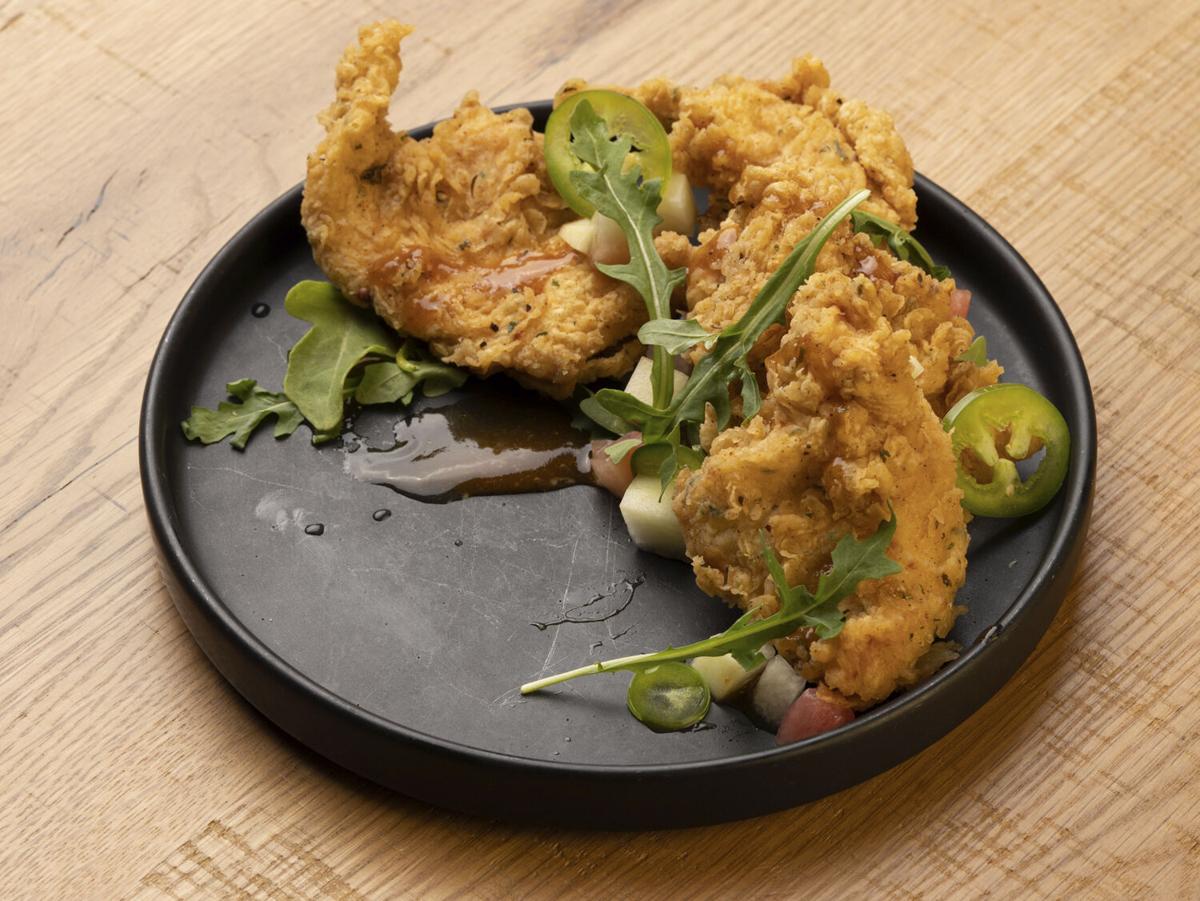 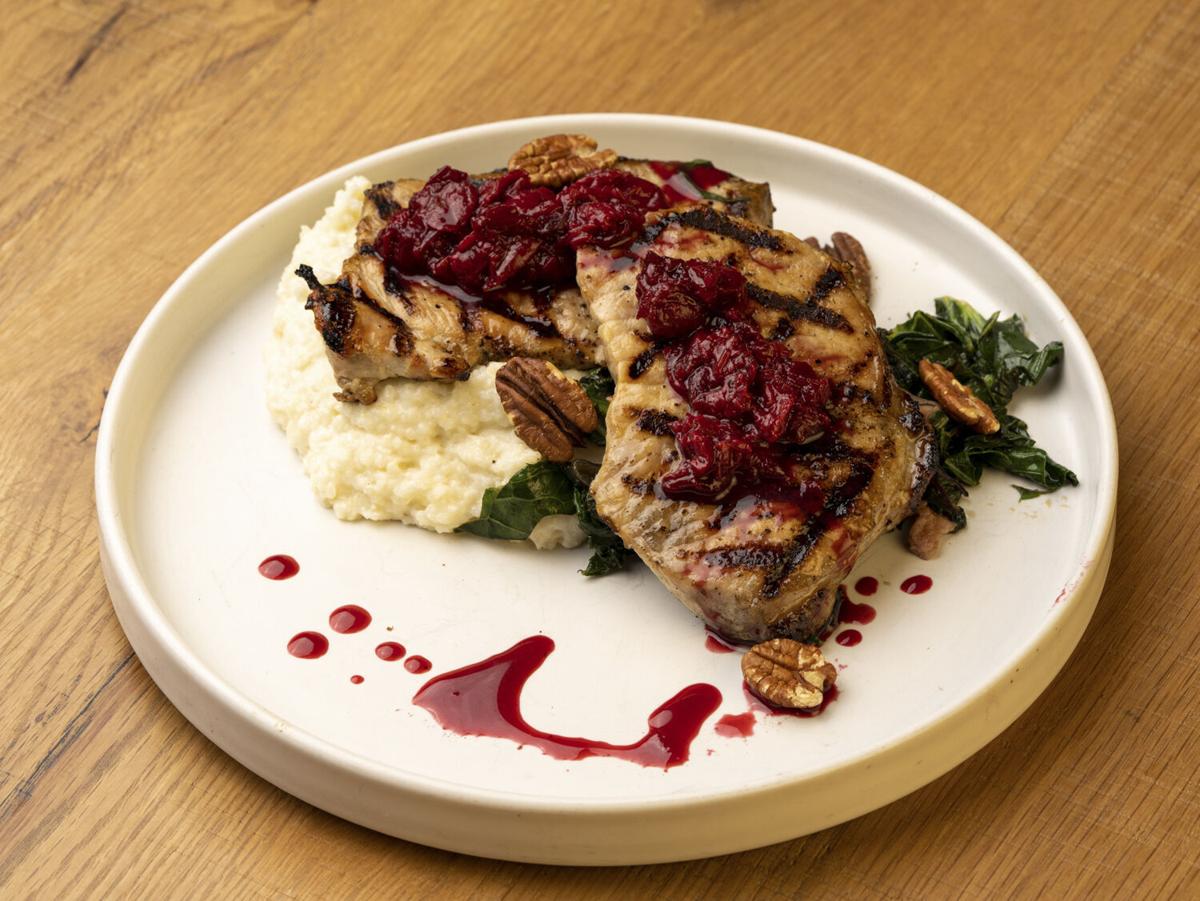 This boozy take on a pork chop features is glazed in J. Rieger whiskey and served with orange-cherry chutney, creamy grits, braised greens and roasted pecans. 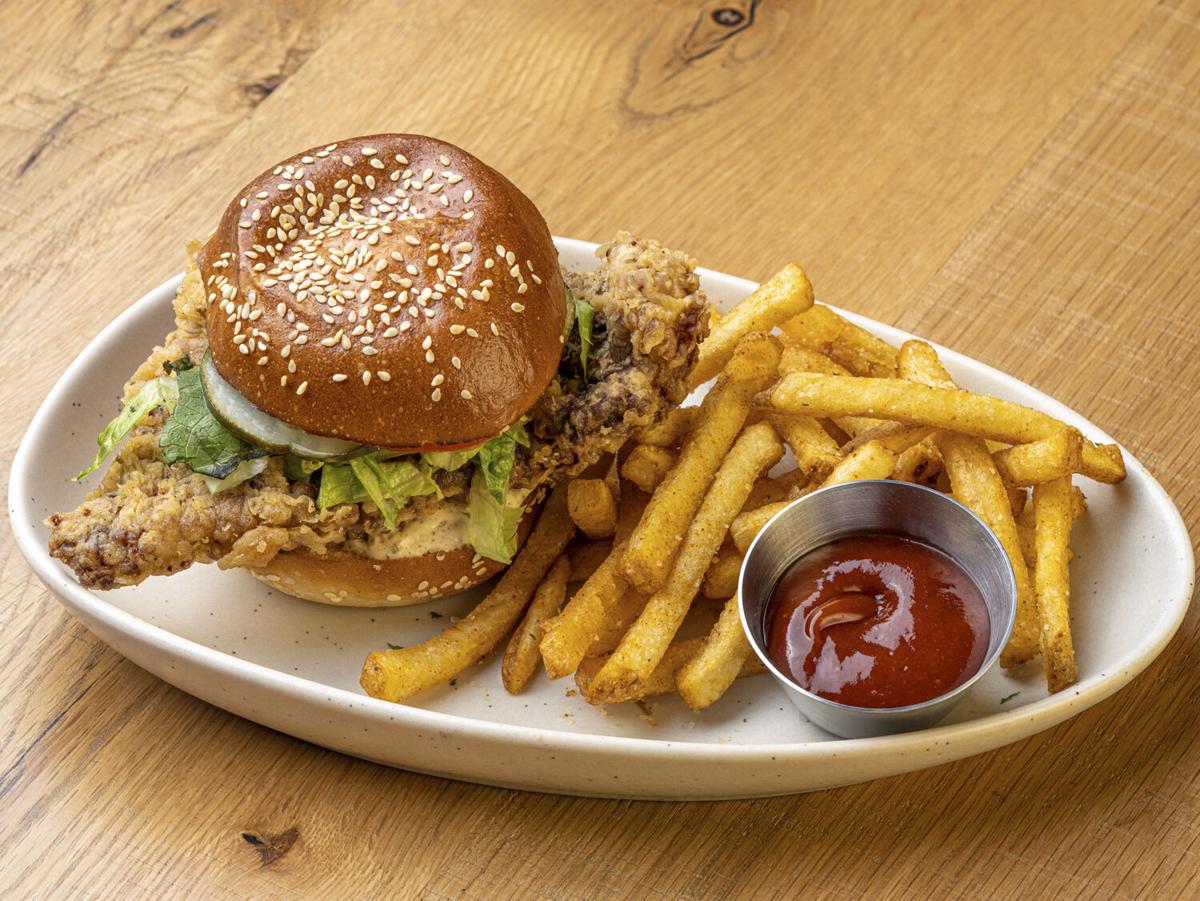 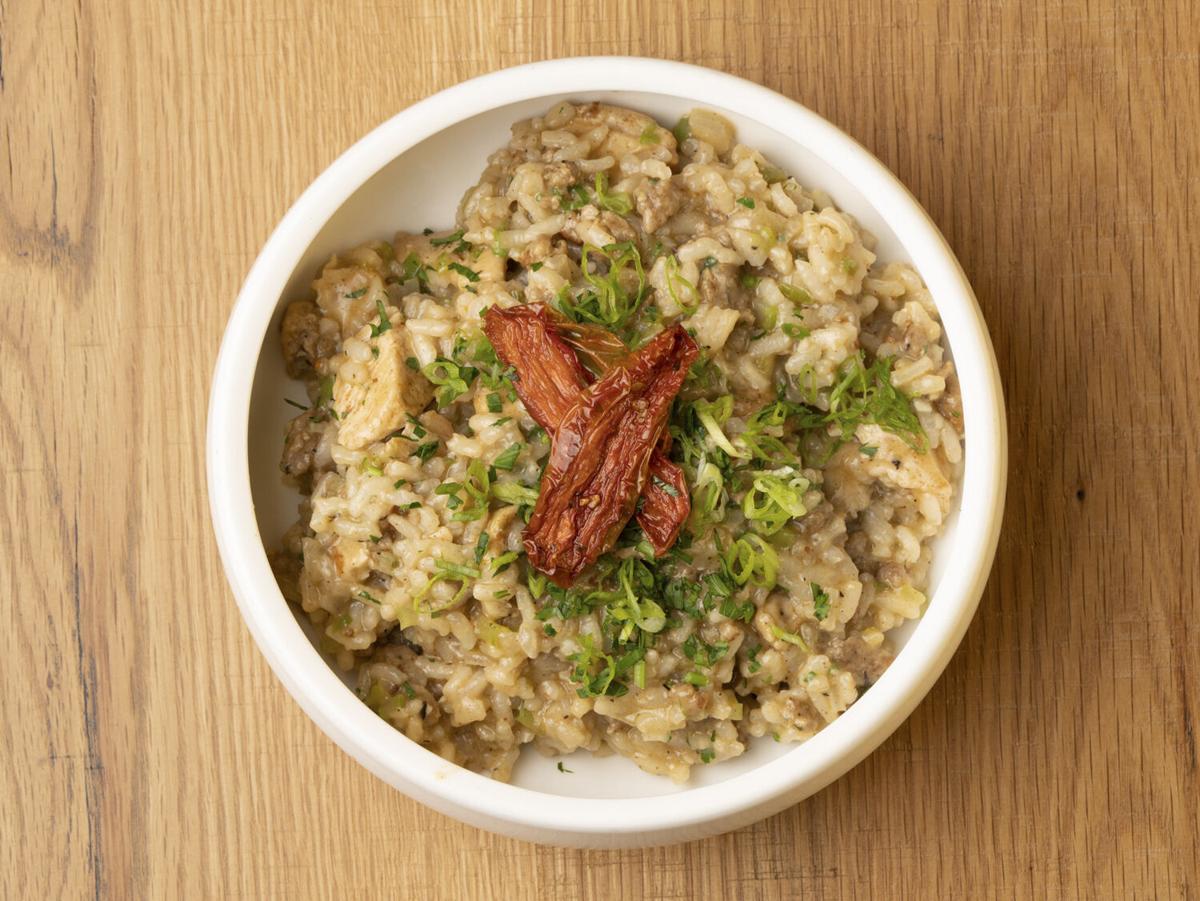 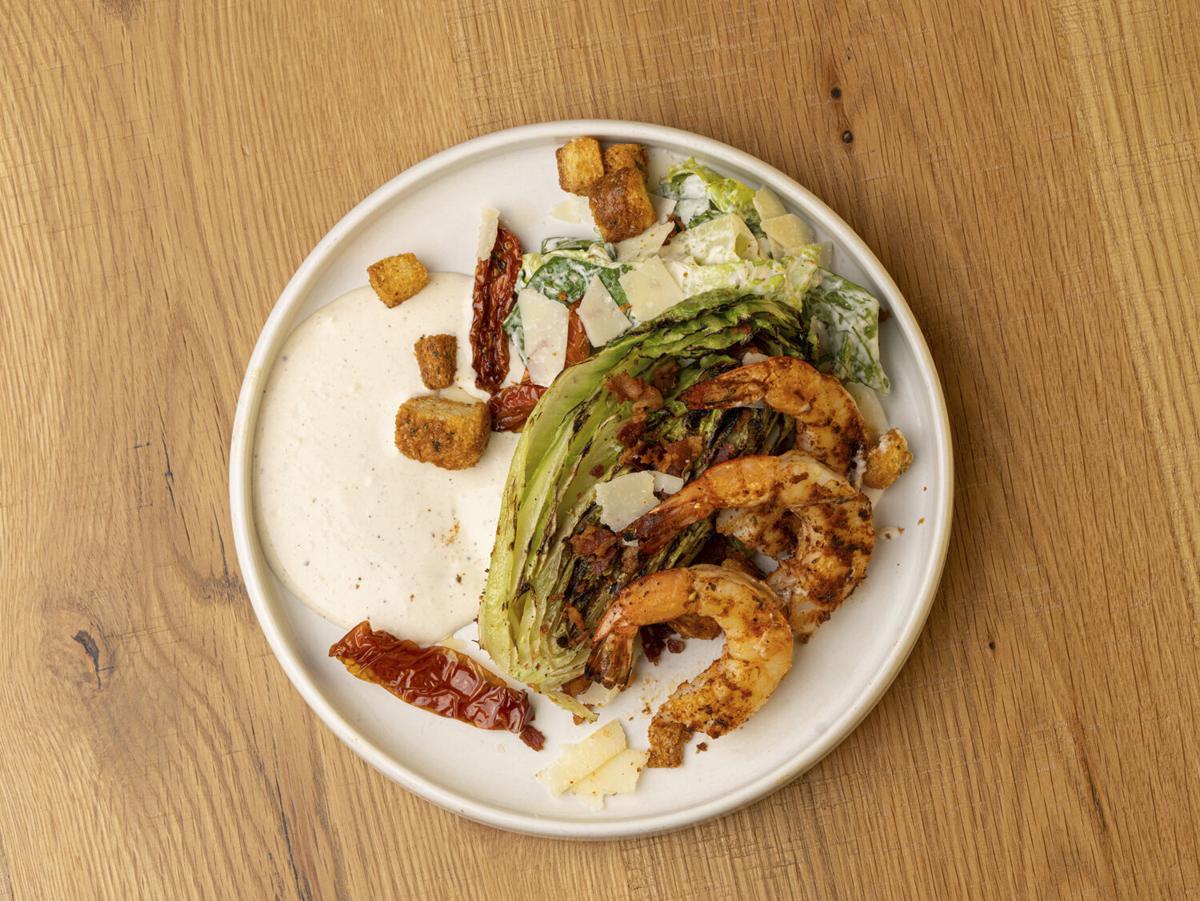 This grilled take on what might look like a Caesar salad is actually the grilled Romaine salad, featuring charred baby lettuce, garlic croutons, bacon and roasted tomatoes served with Parmesan buttermilk dressing

This boozy take on a pork chop features is glazed in J. Rieger whiskey and served with orange-cherry chutney, creamy grits, braised greens and roasted pecans.

This grilled take on what might look like a Caesar salad is actually the grilled Romaine salad, featuring charred baby lettuce, garlic croutons, bacon and roasted tomatoes served with Parmesan buttermilk dressing

Strang Hall has added a new concept – and a new chef – to its food hall.

Minglewood opened Sept. 16 in the Overland Park, Kansas, food hall, serving up new American cuisine. Chef Eli Neal's menu is made up of classic Midwestern dishes with his own modern spins.

The concept is inspired by the chef's own upbringing. Neal, who was most recently the sous chef at the now-shuttered Harry's in Manhattan, has lived most of his life in Kansas, after moving from Ohio in middle school. Southern Ohio is where his family is from, including Neal's great-grandmother, who spent decades running her own restaurant. And while that was before Neal was even born, both his mother and his grandmother grew up in the restaurant. It was farm-to-table eating before it was a trend; if they needed tomatoes, they would grow tomatoes, and so on.

"It was really important to my family's relationship with food," he says.

It makes sense, then, that Neal's menu is thoroughly Midwestern, with some Southern influences that were natural in southern Ohio. Most dishes are ones you would recognize as classic American dishes, but with a fine attention to detail.

"One thing I'm really trying to do at Minglewood is pay attention the food of the American working class and giving them a lot of reverence," he says. "I think in this country we give a lot of reverence to French peasant food and Italian peasant food, but things like the chicken fried steak have become relegated to the land of IHOP."

Neal's version of the chicken fried steak features steak served on a sesame bun with tomato, romaine lettuce, housemade pickles and a black pepper aïoli. The Pork Chop Old Fashioned takes all of the aspects of the classic cocktail and turns them into a plated dinner; the boneless pork chop is glazed with J. Rieger & Co. whiskey and served with an orange and cherry chutney alongside braised greens, which Neal considers the "bitters" of the drink. Other familiar dishes include sandwiches stuffed with meatloaf, fried chicken or battered catfish and a "Yankee" pot roast, which is actually short rib braised in red wine.

The modern takes on these dishes also connect to the restaurant's moniker. Neal takes the name from "Minglewood Blues," a song originally written in the early 20th century that was adapted and covered by several artists over time, possibly most notably by The Grateful Dead as "New Minglewood Blues." And that's how Neal sees his menu – as a modern adaptation of dishes that have changed and evolved over time.

Neal hopes to continue with his mission, possibly becoming more experimental when it comes to using foods that are native to Kansas. He's been spending time in the library – unfortunately, put on pause by a fire that closed it – researching the history of American food and, specifically, what it means to cook in Kansas.

"I think that's a big goal here, for us to keep saying 'How do we cook food more and more of where we are? How do we keep pushing the envelope of what that food can be, while still reining in tradition?" he says.

Minglewood is open inside Strang Hall Tuesday through Sunday from 11am to 8pm. Food can be ordered online for curbside pickup.