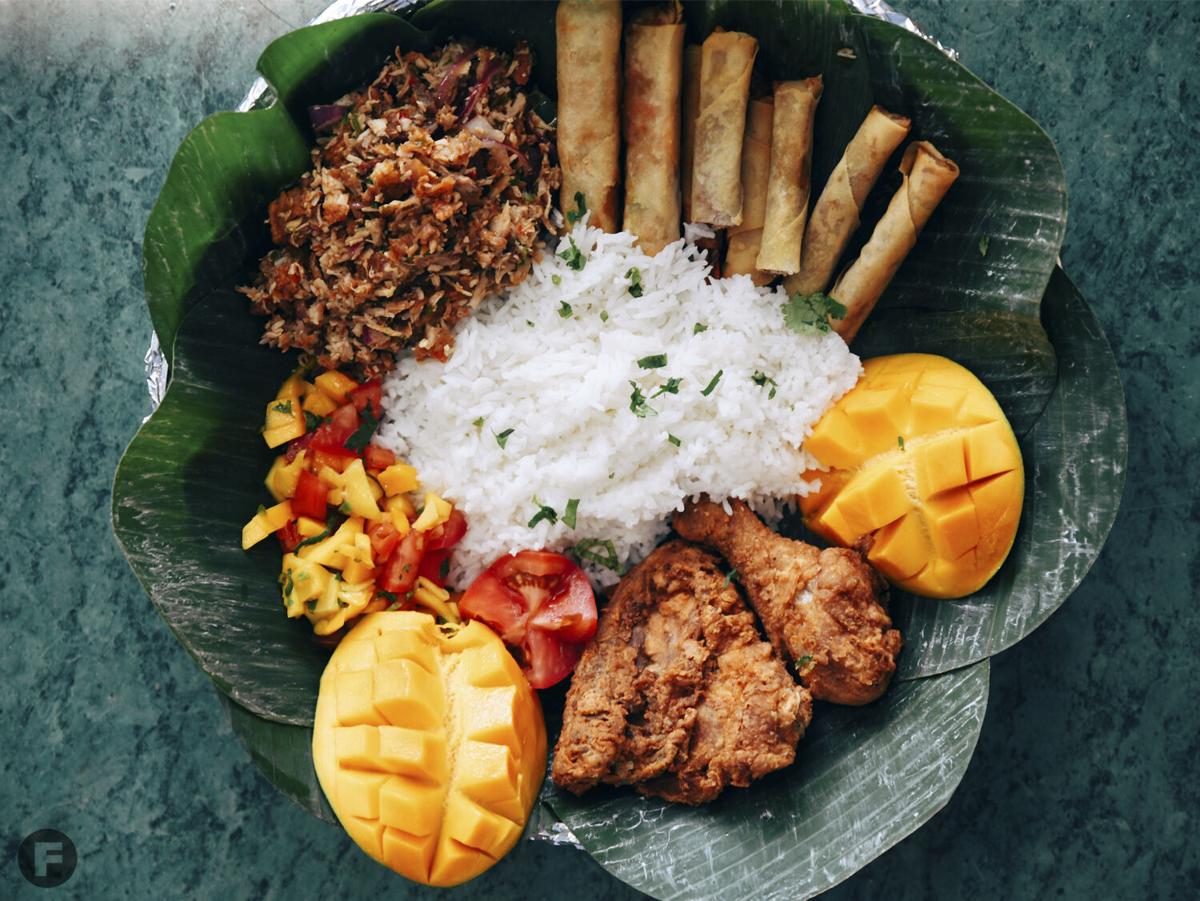 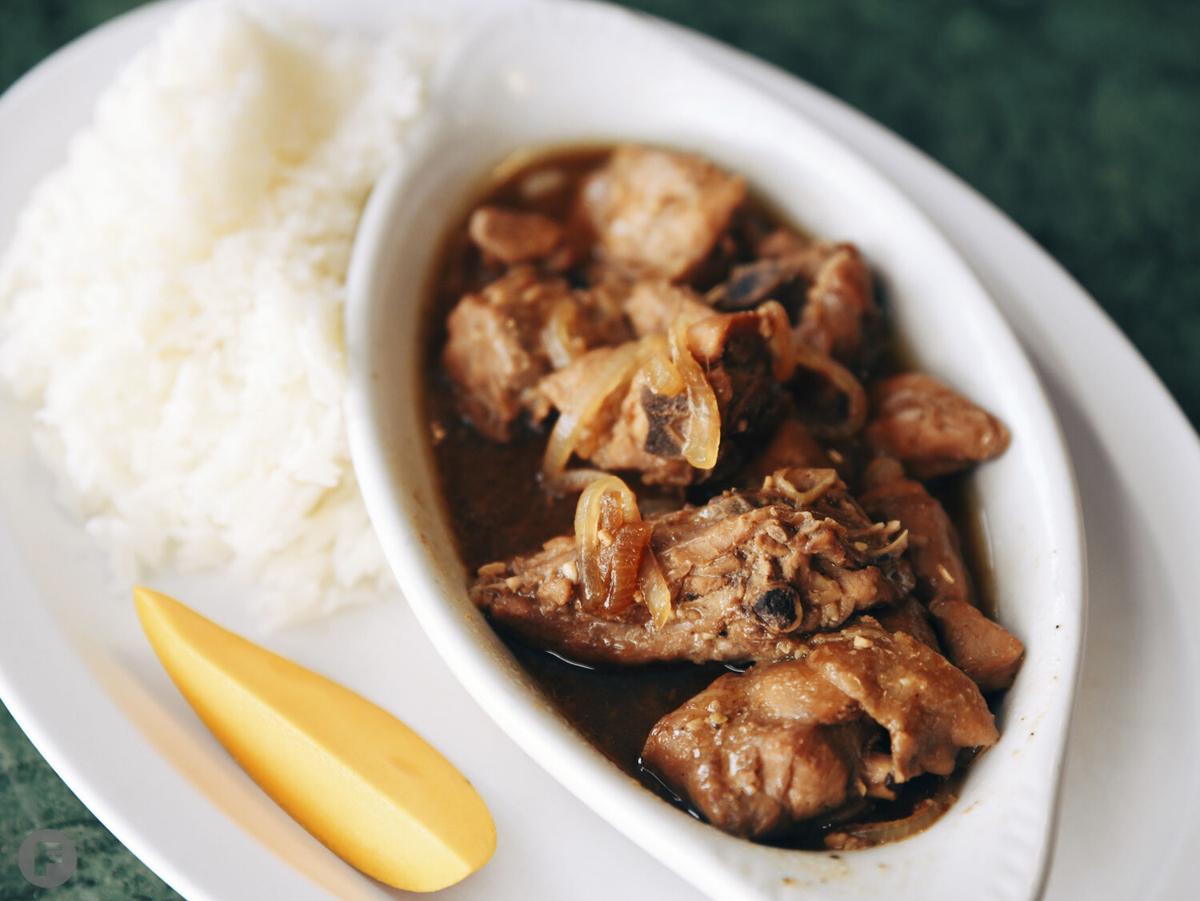 A famous Filipino dish, the restaurant always has chicken adobo on the menu. 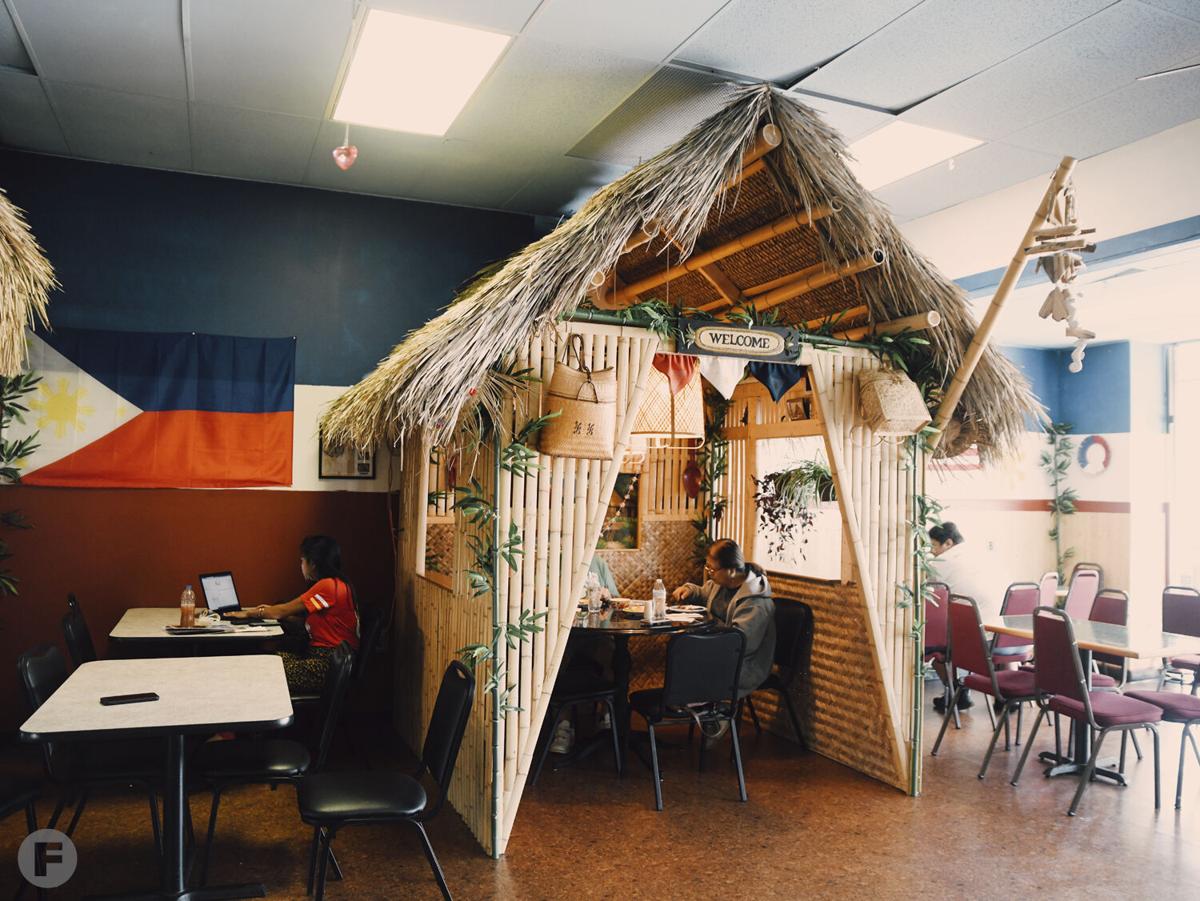 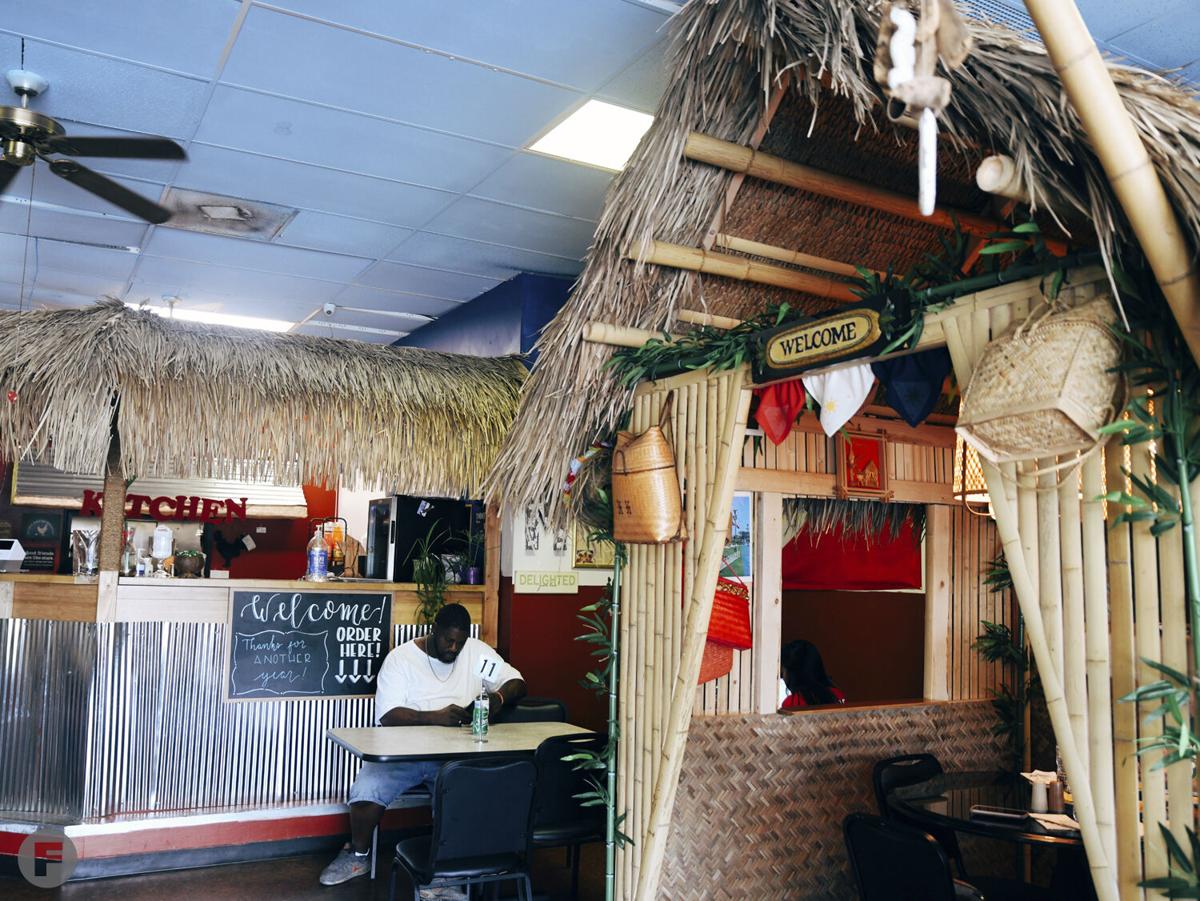 Owner Norma Thayer runs the restaurant with the help from her adult children and their spouses. 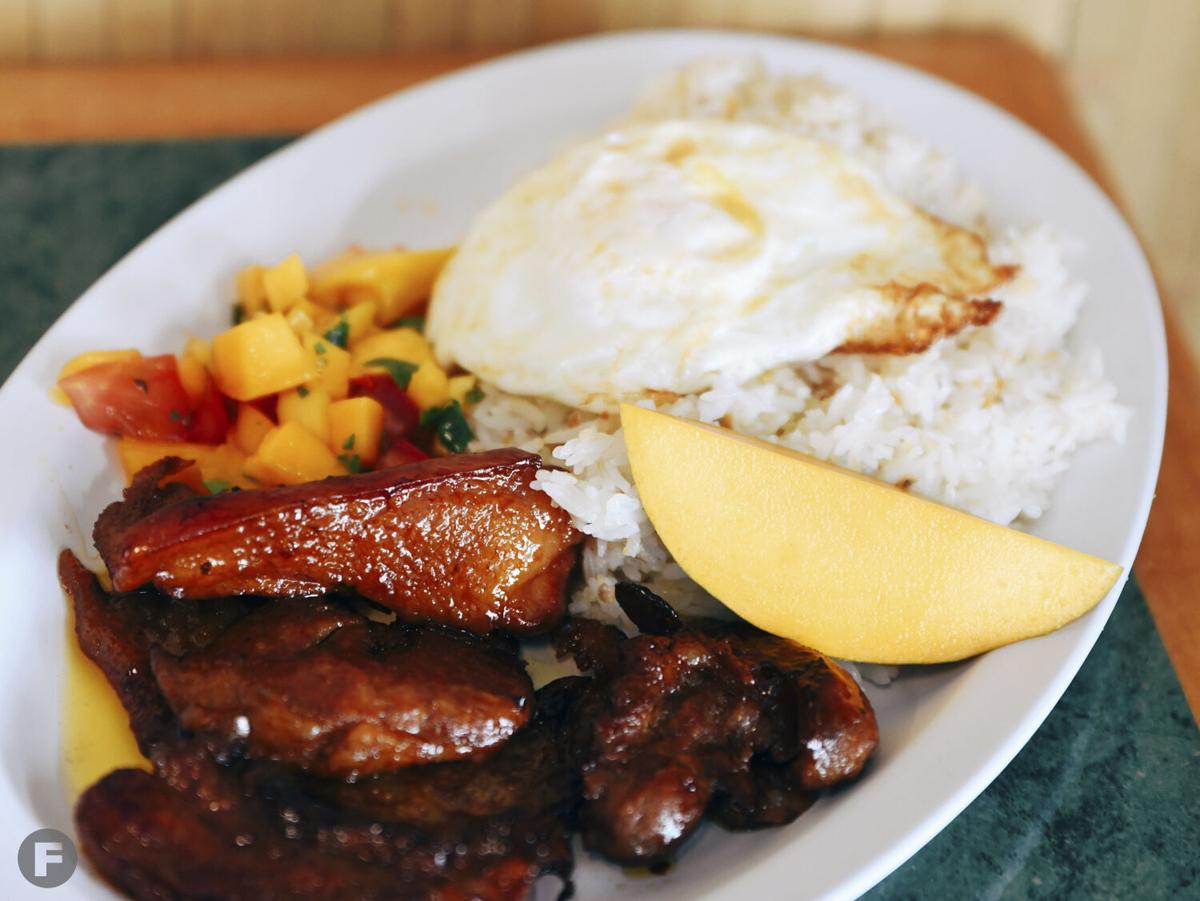 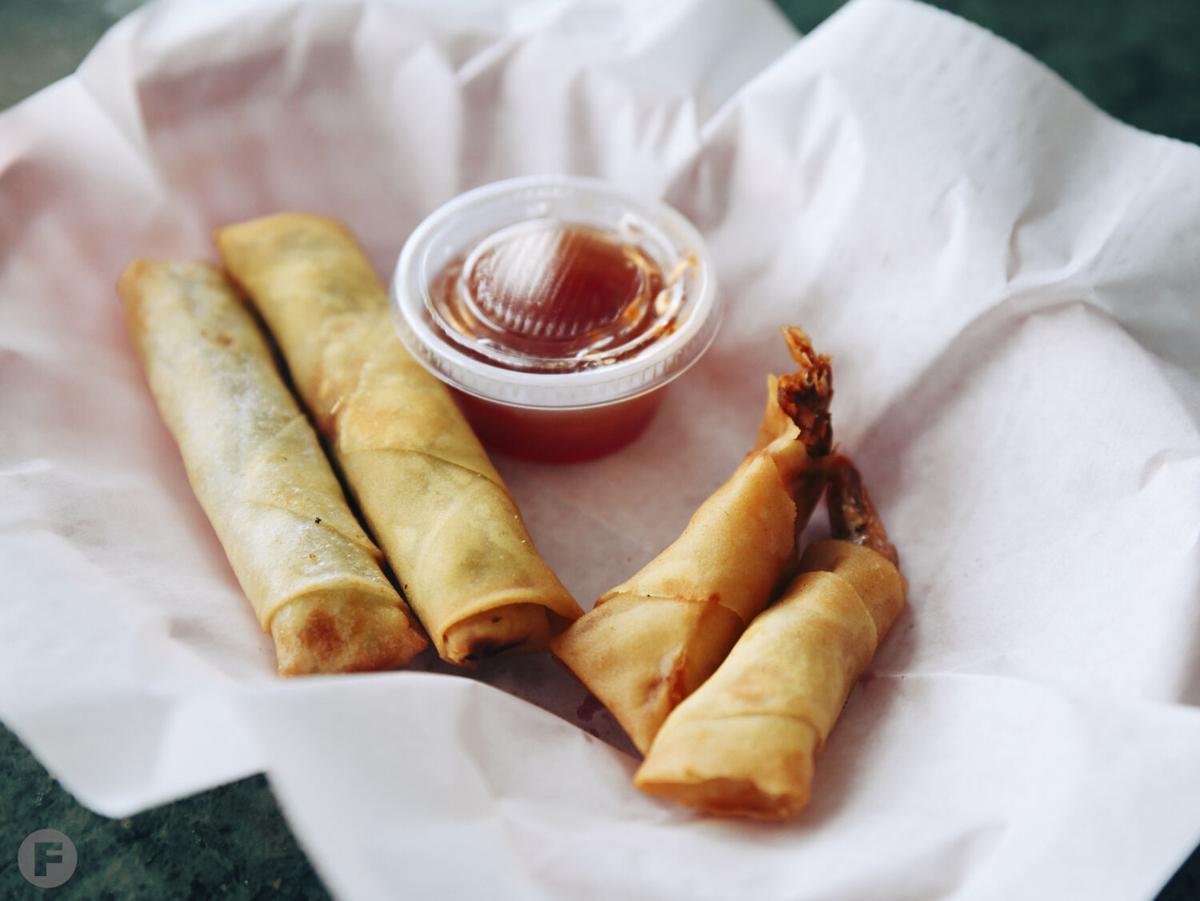 Three miles south of Grandview Triangle, at the far end of an unassuming strip mall just off of Route 71 lies Manila Bay Express, now open and serving some of the only Filipino cuisine in the Kansas City metro.

Since 2014, owner, operator and head chef Norma Thayer has been intent on bringing traditional Filipino cuisine to Kansas Citians, inventing and reinventing the restaurant concept to bring her family’s own recipes to the masses. Originally known as Valley Broasters, then Manila Bay Ihaw Ihaw, the restaurant is known far and wide for Filipino staples meant to be shared in a unique dining experience for the whole family. In March 2021, Manila Bay Express opened its doors, moving past Thayer’s original Southern fusion concept to focus solely on Filipino cooking.

“Our food is kind of a melting pot of tastes and traditions,” Thayer says, noting Filipino cuisine’s Spanish, Chinese and Malaysian influences and commitment to from-scratch cooking. “Growing up in the Philippines, we didn’t have any refrigerators or preservatives. We raised our own chickens and hogs. We cooked with a lot of citrus and sweetness. Everything we made had to be from scratch. We’re doing the same thing here.”

Manila Bay is best known for its broasted chicken, a popular (and patented) combination of pressure-cooking and deep-frying chicken that uses less oil while still quickly delivering a beautifully crispy outside without drying out the meat. From two-piece snack boxes to 24-piece buckets, the broasted chicken is a perfect way to grab a quick lunch or feed a crowd. For sides, start with Manila Bay’s three distinct types of lumpia (think skinnier, fried Filipino spring rolls) with seasoned shrimp, ground beef and veggies – though it might be best to try all three. For a smaller and more traditional Filipino street food, grab the ihaw-ihaw, a delicious kebab-like meat skewer.

One of the real stars of the show is the pork sisig, a dish of assorted minced pork meat and vegetables. The crispy, juicy and tender pork is served on a leaf-covered platter with rice and an assortment of sides. Thayer proudly shared that many of her hogs “never have to get cold,” since they’re often slaughtered in the morning from her supplier in Spring Hill, Kansas, before being delivered directly to Grandview to be prepared for her.

Manila Bay Express almost always has a long line of faithful diners waiting patiently to order their favorites, so call-ahead orders are encouraged. Thayer says she’s even had repeat customers from St. Louis and Springfield, as well as Arkansas, Iowa and Nebraska, who go out of their way to stop in for a bite.

Of course, Thayer isn’t the only one behind the counter at Manila Bay. In addition to being a restaurateur and a retired nurse of 32 years, she’s also a mother, and she seems more than happy to be accompanied by her adult children and their spouses in the kitchen. And, for Thayer, Manila Bay isn’t just a way to make a a living – it’s an opportunity to spread the food she grew up loving as a child with her fellow Americans.

From the team behind The Russell, Tailleur brings European comfort food to Kansas City's Midtown neighborhood

A famous Filipino dish, the restaurant always has chicken adobo on the menu.

Owner Norma Thayer runs the restaurant with the help from her adult children and their spouses.