Feast 5 is a weekly column introducing you to some of the best chefs, bartenders, makers, farmers and more around the region. Have a recommendation for someone who should be featured? Email us at editor@feastmagazine.com.

“You see a lot of crazy names from barbeque competitors and sauces,” Franks says. “Ranging from weird, funny, to kind of sexual innuendos. And I’m just sitting here thinking, what has been important to me in my life? It was hip-hop music.”

And so, there is Smokey by Nature, Franks’ Olathe, Kansas-based barbecue catering and sauce business, named as an homage to American hip-hop trio Naughty by Nature. The tagline, of course – and you need to sort of sing it when you read it – is “Smoked meats, hooray.”

Smokey by Nature has been a dream since 2005, when Franks drove to Houston, Texas, to pick up a smoker. He says his love of cooking was a big part of his childhood. He’s dug into shows, books and websites from science-forward chefs, such as Alton Brown, J. Kenji López-Alt and Meathead Goldwyn (which makes lot of sense, as engineering is Franks' day job). After catering company picnics and finding himself with extra time to think about making a hobby into a full-blown side hustle in 2020, he decided to launch Smokey by Nature in earnest.

“It was maybe right before that when I met Brian Roberts with The Black Pantry,” Franks says. “I was presenting to him my catering business. And he was like, ‘Hey, do you have a barbecue sauce?’”

Franks did – one around 13 years in the making. Franks started bottling and selling Smokey by Nature sauce at pop-ups with encouragement from Roberts, and now he’s trying to reach a wider audience, hoping to land in local grocery and specialty stores.

Below, Franks touches on a comfort food memory, the magic of salt and a potentially controversial barbecue opinion.

1. What’s the best thing you’ve ordered at a local bar or restaurant lately? I went to Overland Park Farmers' Market. There was a pop-up there, and it was called Taco Naco, and when I first tried it, I went back at least two or three times in the same day. My wife and I got breakfast tacos, ate them in the car, walked back and got more tacos. The stuff that she makes is SO good. It’s just amazing.

In Overland Park, Taco Naco now has a permanent home for its tacos, salsas and fresh produce

2. What’s the best style of pizza – and why? St. Louis-style Imo’s Pizza. Not everybody likes it, but it’s my hometown, and it’s my childhood. But as far as the big three, St. Louis, Detroit, and New York – it’s gotta be New York.

3. What’s your favorite food memory? My mom’s mashed potatoes and meatloaf. Not only for dinner, but the next day making meatloaf sandwiches and putting Frank’s RedHot hot sauce on it. That’s my comfort right there.

4. What ingredient do you think everyone should keep at home and why? My main one is going to be salt. For goodness’ sake. Salt. Answers 1 through 9 are salt. I know some people are either low-sodium – no disrespect there – or some people say they don’t like salt. I’m like, what are you talking about? Science shows salt makes food taste more like itself. Add it when you’re cooking – you can after, but it’s better if you do it when you’re cooking it. It’s going to give that dish way more presence about it. Anything from oatmeal, which sounds weird, to the pasta that you’re making or meat that you’re making. And, specifically, kosher salt. Almost everything needs to be salted every step of the way. You’re making your sauce, add a little salt. Your pasta over here, add a little salt. Ground beef, add salt. And answer No. 10 is Tabasco’s Chipotle Hot Sauce. It’s amazing. I could drink that.

5. What’s your most controversial food opinion? I can make “smoked barbeque” without using a smoker, and you will not be able to tell the difference. Scientifically speaking – because I’ve read so much about barbecue – a first step in making people understand this is that meat will only take on smoke for about 3 hours. My source on that is this guy named Meathead; he runs this site named amazingribs.com. He’s got a lot of scientific stuff. And he has a lot of articles about smoking and what they’ve done tests on. Meat stops taking smoke in after three hours. I can take a brisket, cook it for three hours to get the smoke in there, and put it in the oven to let it finish out. And you would think it was smoked on the smoker. There are ways you can add smoke flavor – of course, liquid smoke – to a piece of meat. People think, “Oh, you gotta have that smoke ring,” which is awesome for presentation. But there are ways to fake it. So, if there are ways to fake it, should it really be part of the criteria? There are ways to get that flavor in there without ever touching the smoker. 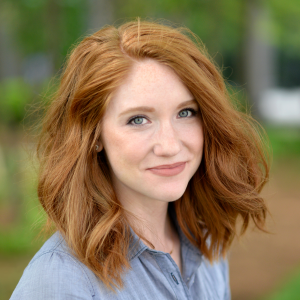 Lauren is a Springfield, Missouri-born, Kansas City-based writer, editor, and pastry chef. After Mizzou journalism school and Chicago pastry school, she’s back in Missouri with her own KC cottage bakery, Jean June Pastry.