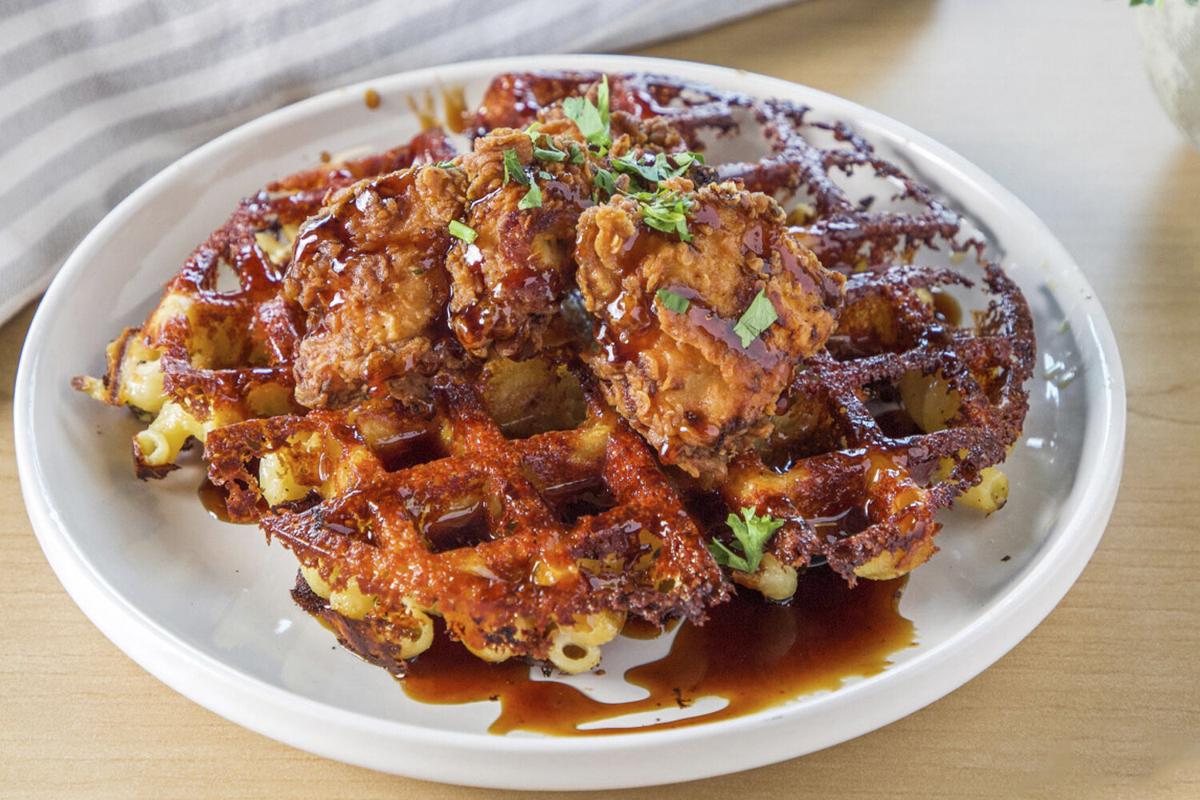 The Chick N' Waffle takes a mac 'n' cheese waffle and tops it with twice-fried chicken and a sweet and spicy sauce. 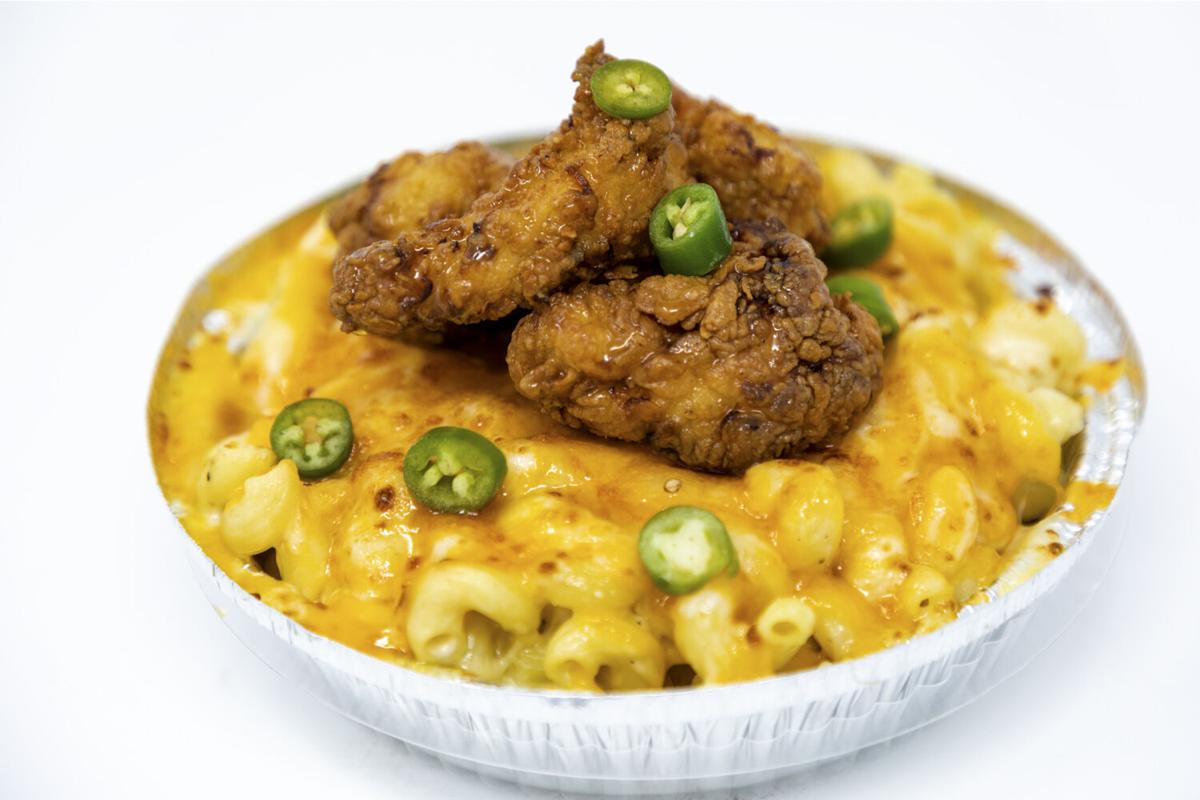 The signature honey serrano mac is topped with twice-fried chicken and a honey-serrano pepper glaze. 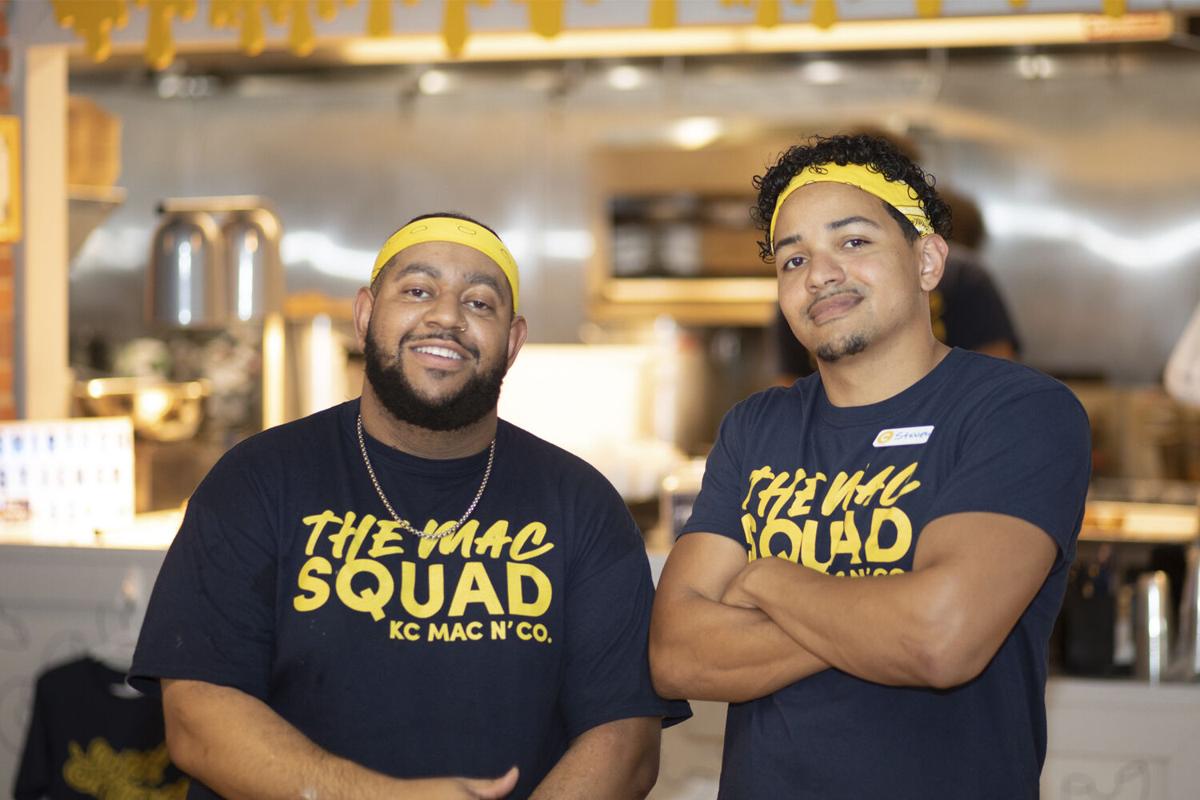 Dwight Tiller and Steven Austin are the co-owners of KC Mac N' Co. 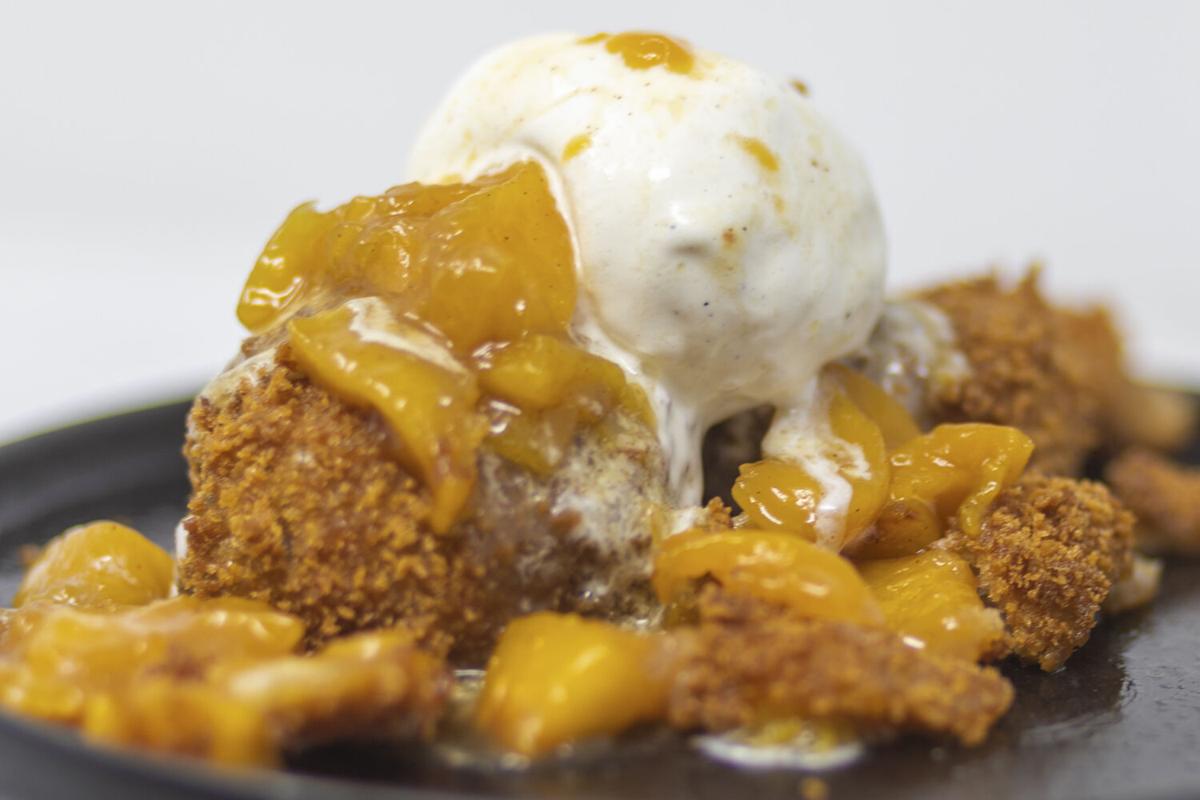 The Co. Cobblers features peach cobbler filling breaded, fried and dusted with cinnamon sugar and is served with a scoop of vanilla ice cream.

Kansas City now has its own spot dedicated to delectably gooey macaroni and cheese. KC Mac N' Co debuted in Kansas City's Parlor food hall on July 16, and since then, the concept from co-owners Dwight Tiller and Steven Austin has been dishing out creamy mac 'n' cheese to droves of customers.

It all began when Tiller, the chef of the operation, started making his mac 'n' cheese for Austin as a cheat meal. Tiller didn't even like mac 'n' cheese growing up, but over time working as a chef, he developed a recipe to his liking. Once Austin had a taste, he started supporting Tiller's ambitions as much as he could; they've been in business together since.

The concept started as a pop-up concept out of Tiller's family food truck, but when Austin saw that kitchens were available for lease at Parlor, he immediately reached out. Within a week, the pair was touring the space, and it soon became home to KC Mac N' Co.

"Folks have taken us in," Austin says. "The other concept owners and chefs have been super helpful on a lot of things and really helped guide us."

The center of the menu is, obviously, Tiller's mac 'n' cheese, which features cavatappi pasta in a creamy cheese sauce and can be dressed up in a variety of ways. The signature dish takes that same pasta and tops it with Buffalo- and buttermilk-marinated, twice-fried chicken and a honey-serrano pepper glaze. The Cowboy Mac tops the pasta with smoked brisket and fried buttermilk onions, or if you want to go simple, the Just Mac adds a six-cheese blend to the cavatappi before being topped with garlic panko breadcrumbs. Looking for something truly out of the box? The Chick N' Waffle starts with a waffle made of a six-cheese mac before being topped with the signature fried chicken and the house S&S (Something Sweet and Something Spicy) sauce.

For sides, opt for fried potato wedges tossed in an herb blend, salt and Cotija cheese, or go all-in on the theme with the mac fritters, breaded with panko and herbs before being deep-fried and then topped with grated Parmesan and served with a tomato cream dipping sauce.

So far, KC Mac N' Co has been a success. When the restaurant opened at 11am that first day, the partners didn't see a break into their line until 9pm or later. And people keep coming back for more.

"It's been overwhelming, honestly," Tiller says. "I didn't expect it to be this good."

For now, the team has no plans to vacate Parlor, but expanding to a brick-and-mortar location is something the owners could see down the line.

"It may not be a huge, massive restaurant by any means, because we are a macaroni and cheese concept, but I do think a standalone space will be something we see in the future," Austin says. "We're still kind of turning the wheels there."

These chef-inspired flavors are all made with 14 percent butterfat base, considered super premium for ice cream.

The best food and drink events in Kansas City this weekend: Oct. 15-17

Sample all things cheesy, try some new beers or learn to make some magical cocktails this weekend.

The opening is a step up for the restaurant, which previously had just a stand at the market.

After a devastating fire, Big Red Food Truck is serving smash burgers yet again in the Kansas City area

The moist cake donuts use housemade apple cider and apple pie spice in the batter.

The Chick N' Waffle takes a mac 'n' cheese waffle and tops it with twice-fried chicken and a sweet and spicy sauce.

The signature honey serrano mac is topped with twice-fried chicken and a honey-serrano pepper glaze.

Dwight Tiller and Steven Austin are the co-owners of KC Mac N' Co.

The Co. Cobblers features peach cobbler filling breaded, fried and dusted with cinnamon sugar and is served with a scoop of vanilla ice cream.