Read Today's E-Edition
Share This
In Kansas, Five Mile Farms pairs high quality meat with a lesson in regenerative farming
Share this
1 of 2 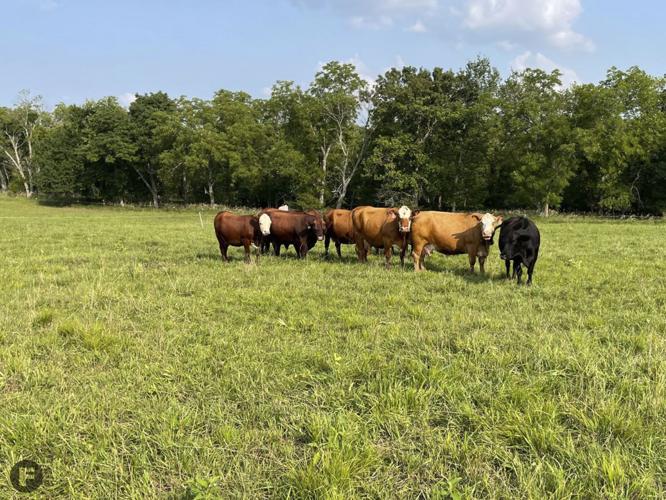 Cattle both keep the grass short while fertilizing the farm's soil. 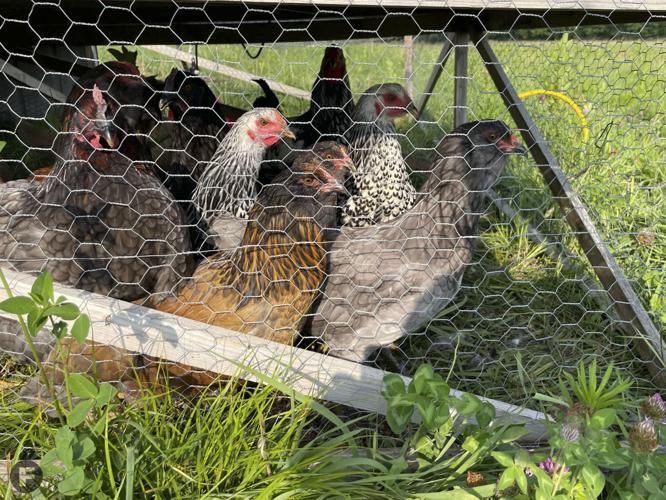 Egg laying hens eat fly larvae, both sustaining their diet and helping keep flies on the farm to a minimum.

It’s a hot, sunny Wednesday at Five Mile Farms in LaCygne, Kansas, where about a dozen cattle are grazing in a bright green pasture. The herd is huddled together in a tight oval, except for one member: a hefty brown female named Ursula, who appears to be in a grumpier mood than her peers. And for good reason – just an hour ago, she had given birth to her first calf.

Mingling back with the herd are other females, like Millie and Moxie, among others. Here at Five Mile Farms, many of the animals have their own names. It’s just one way owner Lucas Price and his family build relationships with their livestock – an indicator of how the farm differs from others with more common agricultural processes.

Five Mile Farms develops its beef and poultry through regenerative agriculture, a farming practice focused on utilizing livestock as tools to rebuild and restore soil biodiversity in an effort to improve the environment. The process can be seen in how Price treats his cattle, which are moved to a new grazing location every day. Cows are placed in a paddock, where they will graze until they are moved next day, leaving the remnants of the eaten plants in the soil as organic matter. Flies will lay eggs on the cow manure left behind, and in three days those eggs will become larvae; egg-laying hens then move into this area and eat the larvae and remaining grass. And a month or two later, the cows will return, starting the process over again.

It’s a cyclical, symbiotic process that all at once gives the livestock more natural lives while improving the farm’s soil. And because the land generates natural fertility and the hens’ appetites keep the fly population low, the Prices are able to avoid using chemicals or pesticides. While the giant feed lots of big agriculture will place all of their cattle in a larger pasture without any rotation, Five Mile Farms’ process harkens back to the way bison grazed years ago. It results in a top-of-the line product: grass-finished beef, pasture-raised chicken and more.

Five Mile Farms delivers its product to its customers in a few ways. Most of the farm's sales come through its booth on Saturdays at the Overland Park Farmers' Market, where patrons can ask questions and learn more about regenerative farming. But the Prices also use drop points, a process in which customers make a pre-order, and the Prices meet them with their products at a predetermined time and location. The list of products Five Mile Farms offers is vast, but according to Price, what sells the most are steaks and burgers in the summertime when customers want to grill and whole chickens and roasts when the weather gets colder.

While the sales aspect of the farm is crucial, it’s only part of the equation for the family. It’s also their priority to educate the public and spread the word about the importance of regenerative farming. It’s why Five Mile Farms hosts multiple tours a year.

“What my hope is is that they see they can build a connection with their producer or multiple producers,” Price says. “My goal is they understand they’re voting with their food dollars. Going to the grocery store is entirely different than understanding their methods.”

The regenerative process helps the Prices connect with the land they own and the animals they raise, but it also allows the family members to build stronger connections with each other. Lucas and his wife Ileana have four children, ranging from ages 8 to 21, and the youngest three spend almost as much time helping with the farm as their parents.

“They’re a part of it,” Lucas said. “It’s not just me. They’re intimately involved in it, and they get paid incentives based on how many birds get to butcher. We’re trying to teach them more than just taking care of animals. We want them to be owners of the farm and understand what that means to take care of the animals.”

To order from Five Mile Farms or attend a tour, head to the farm's website.

Cattle both keep the grass short while fertilizing the farm's soil.

Egg laying hens eat fly larvae, both sustaining their diet and helping keep flies on the farm to a minimum.