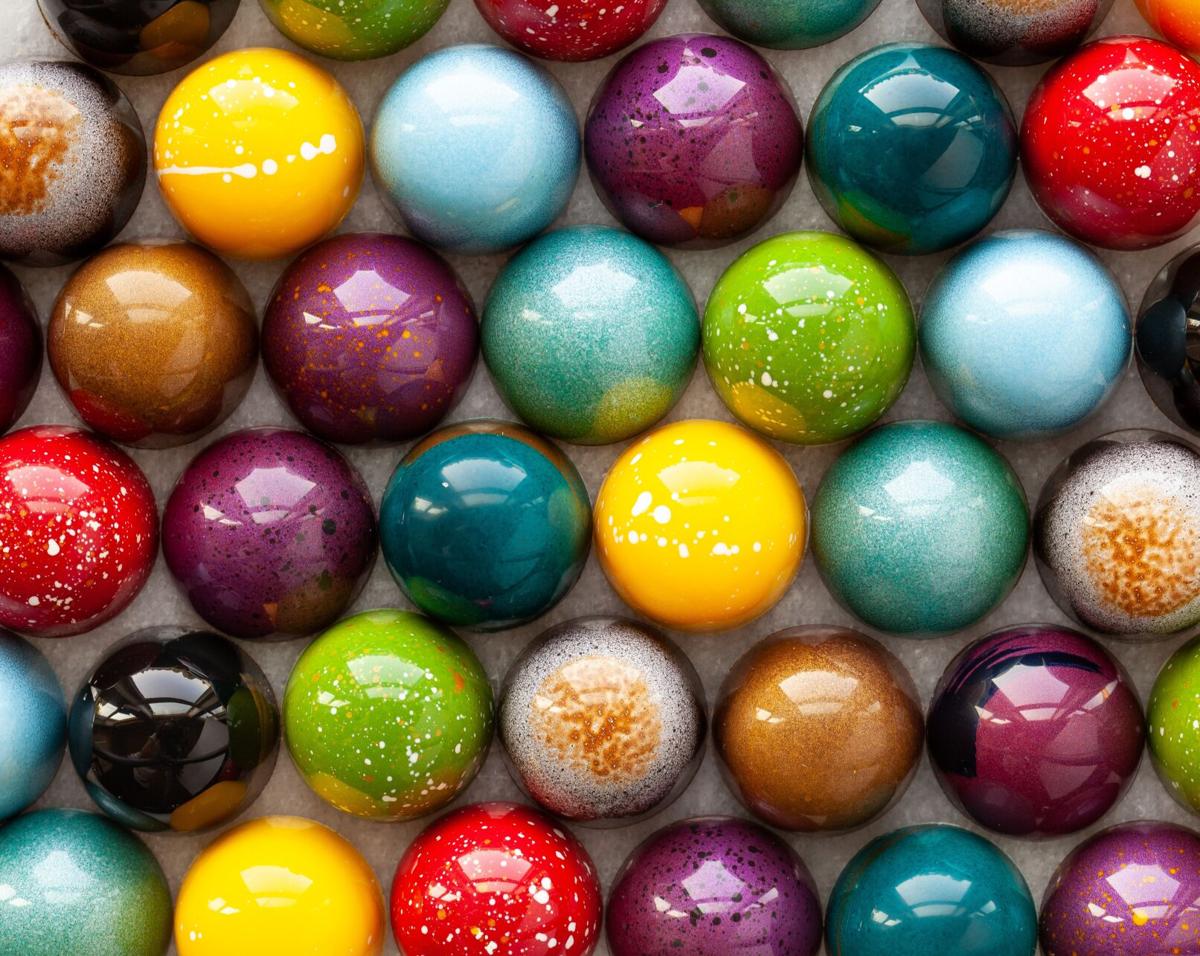 Bliss Chocolatier offers a range of colorful bonbons, all of which reflect the flavors that hide within. 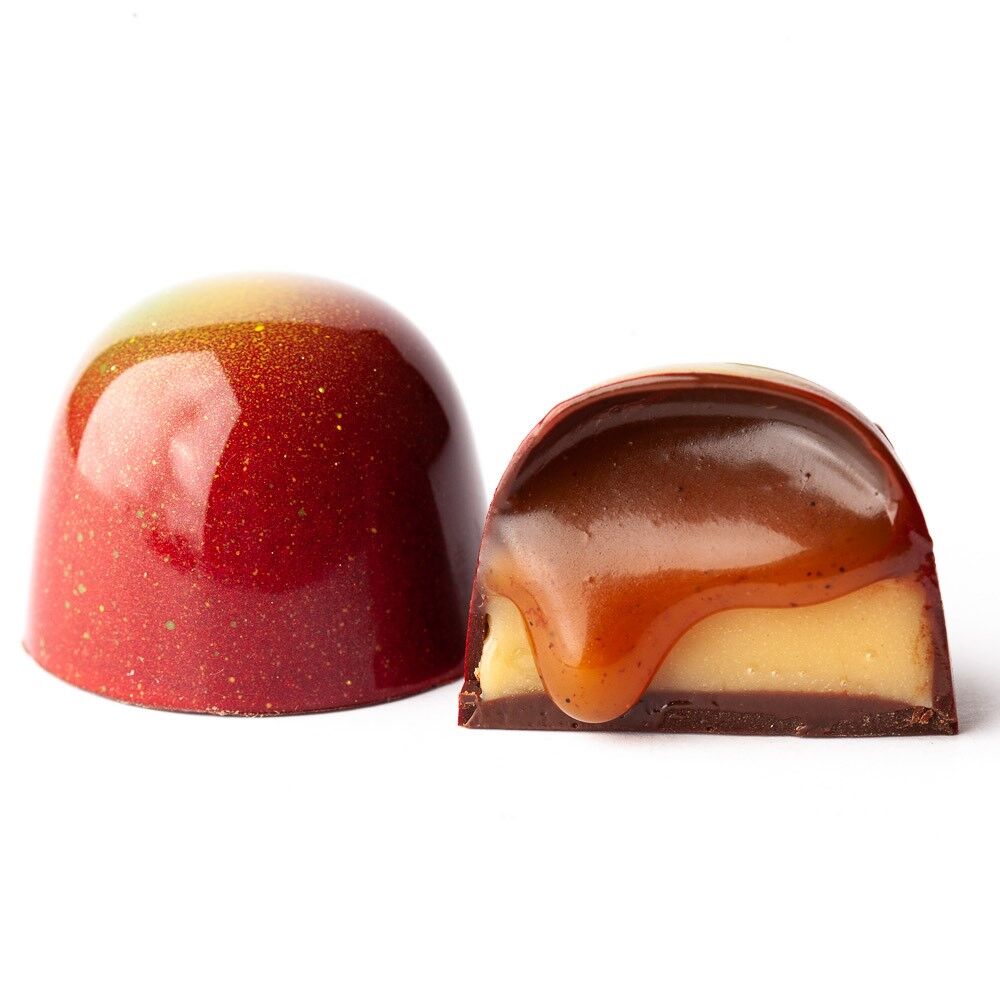 The caramel apple bonbon is made with apple cider and warming spices. 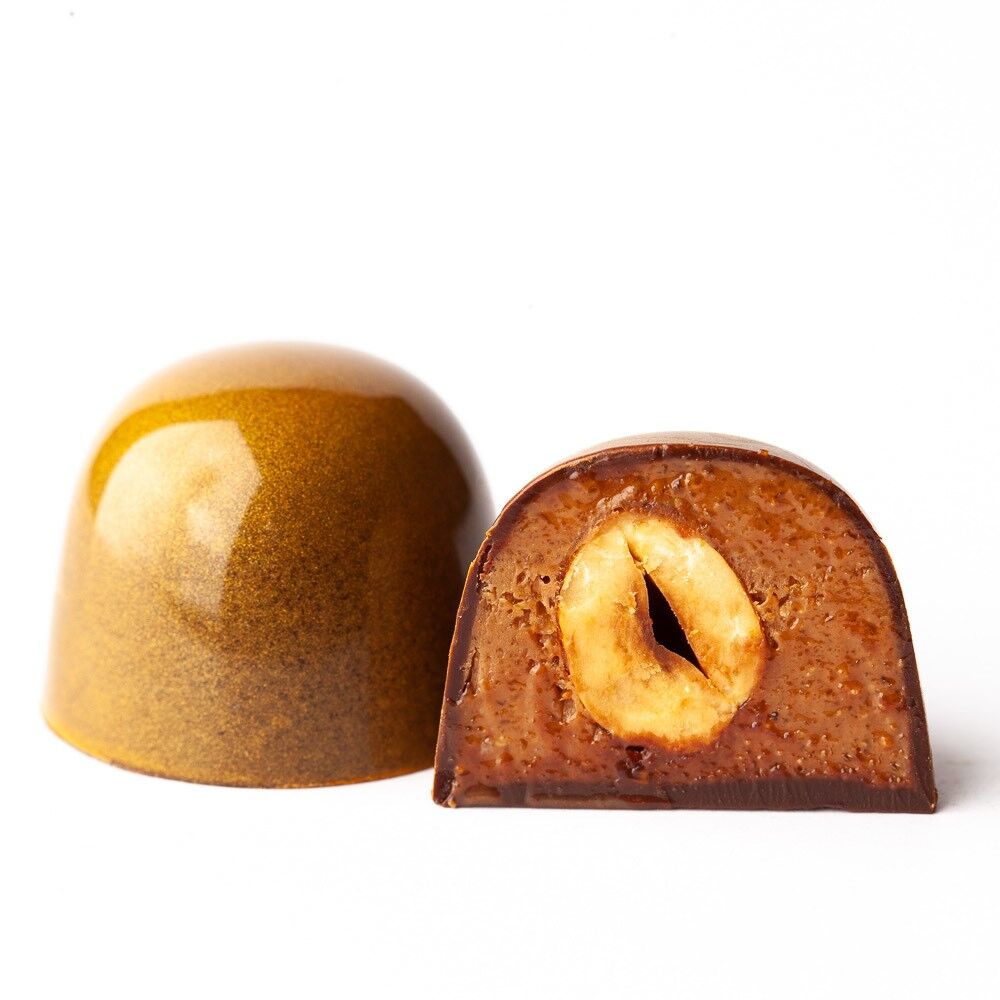 The hazelnut crunch has an entire hazelnut hidden inside. 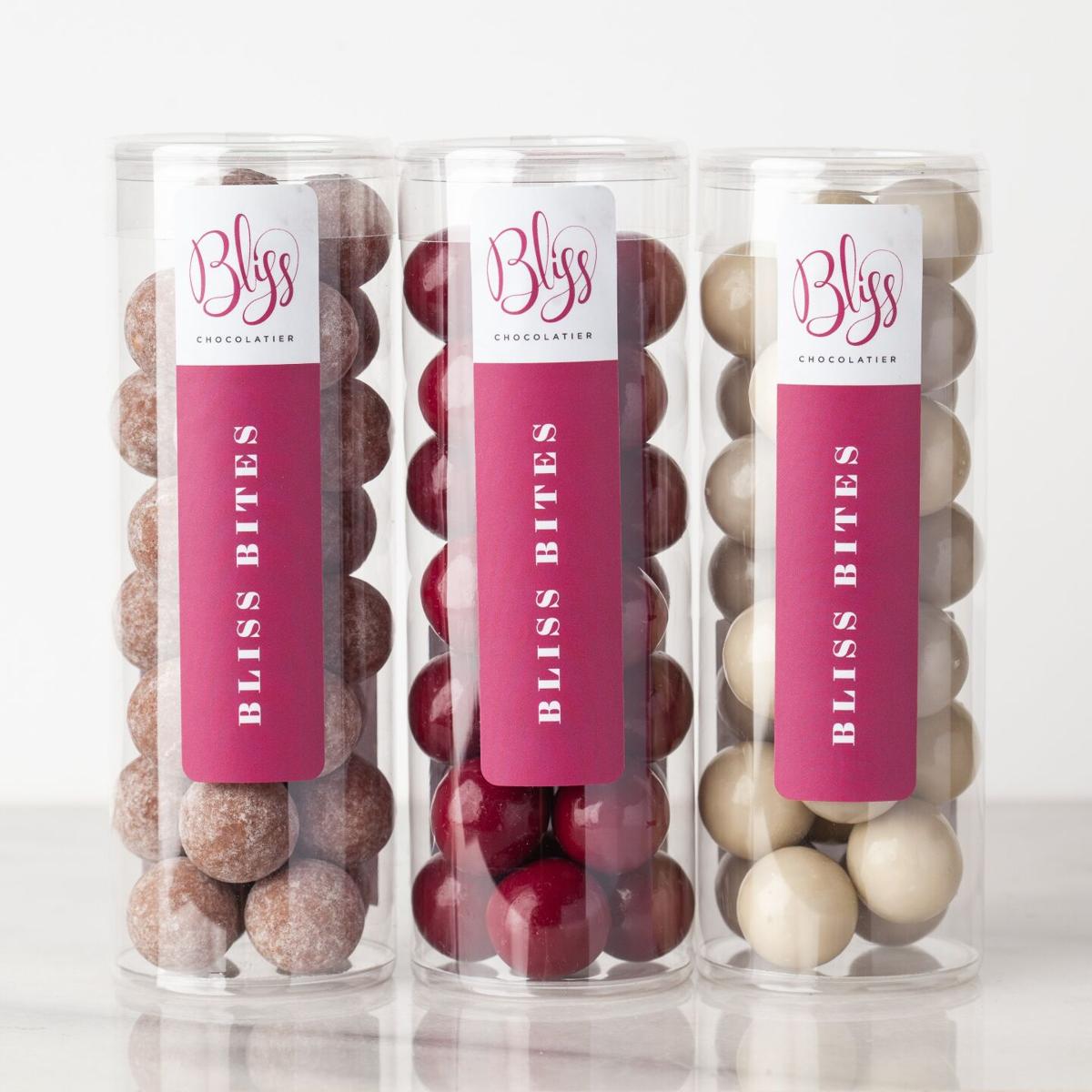 Whoppers are no match for these house-made chocolate-covered malt balls from Bliss Chocolatier. 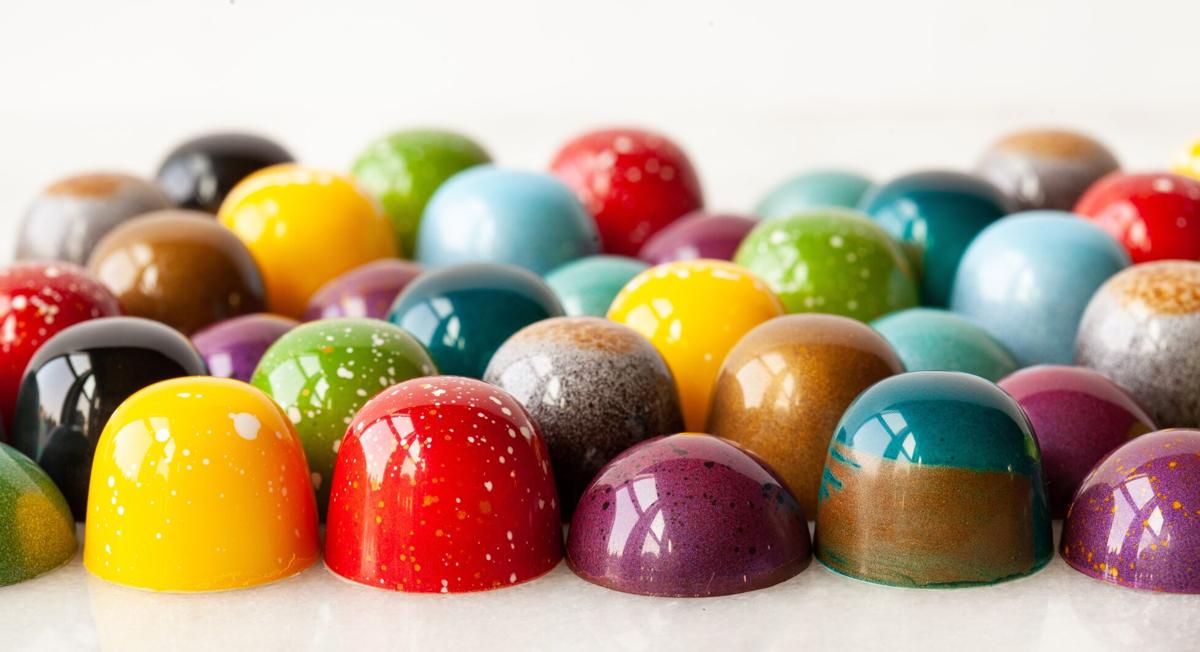 Bliss Chocolatier makes bonbons in a range of sizes, flavors and colors. 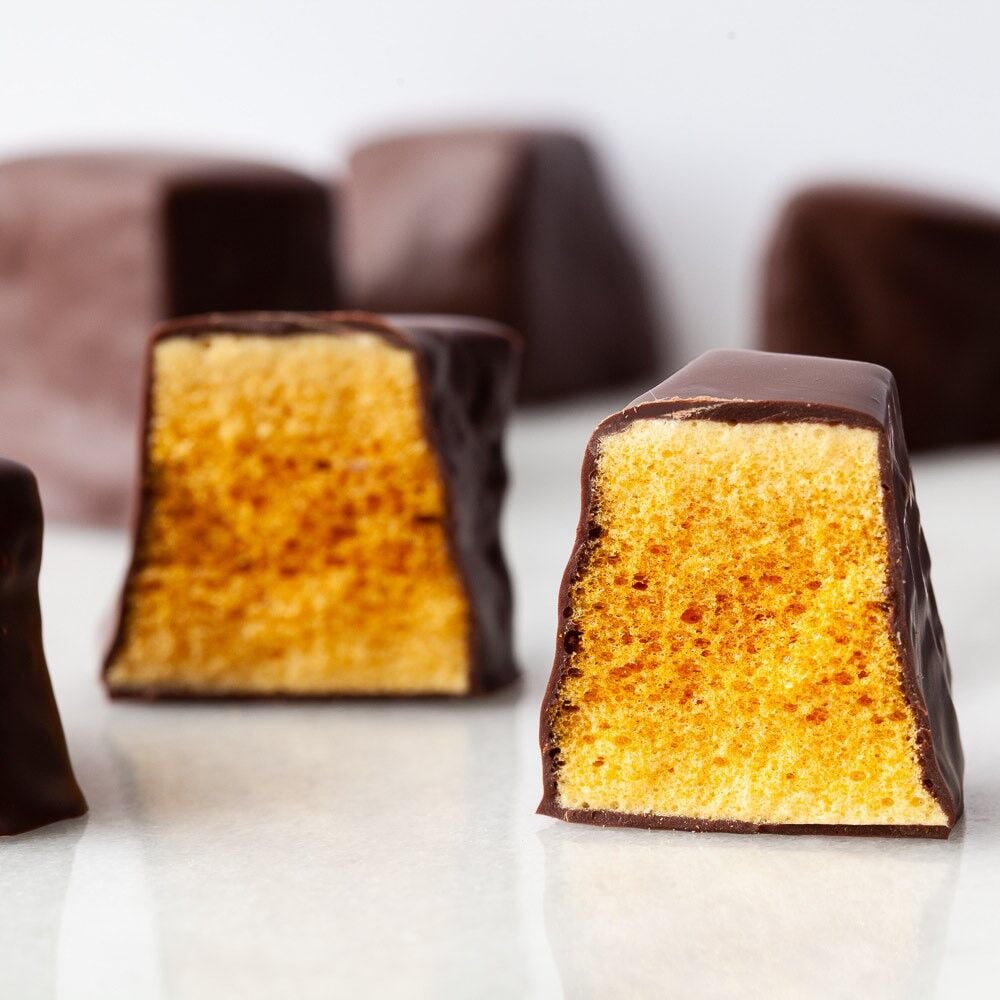 Bliss Chocolatier can't keep enough sponge toffee in stock, even incorporating it into one of their chocolate bars.

Bliss Chocolatier offers a range of colorful bonbons, all of which reflect the flavors that hide within.

Whoppers are no match for these house-made chocolate-covered malt balls from Bliss Chocolatier.

Bliss Chocolatier makes bonbons in a range of sizes, flavors and colors.

You can now find some of the prettiest chocolates in Missouri at a storefront in a Blue Springs strip mall.

Washburn only began making chocolate a few years ago. She originally went to college for chemistry, but she ended up graduating with a degree in art history. While living in upstate New York, she made a living as a professional photographer, but when her family moved to the Kansas City area, she took a step back to help her kids settle into the Midwest.

The longer she was away from photography, the less it felt right to jump back in, so Washburn began looking for her next step. She had always loved baking, but pastry school wasn't the right the fit, so she started challenging herself to make different baked goods from assorted cookbooks. But when she found Christopher Elbow Chocolates for the first time, something clicked.

Washburn dove into learning about chocolate. She started reading about the craft chocolate movement in the U.S., studying chocolate as an agricultural product and what role it plays in the world's economy. She followed her interest and enrolled in a three-month online professional chocolate course from Ecole Chocolat, where she fell in love. A year or so ago, she started a cottage food business selling her chocolates out of her home. On Dec. 15, Bliss Chocolatier opened to the public, and she's been selling her adored confections here since.

Everything in the store is made by Washburn, with the exception of the one employee on her payroll, her 16-year-old daughter. Her bonbons are the star of the show, showcased across her Instagram using her pro skills. Washburn herself doesn't have a favorite, saying that her chocolate of choice depends on what she's craving.

"I really don't because it changes all the time" she says.

For something tart, Washburn recommends the Key lime cheesecake bonbon made with lime pâte de fruit, creamy vanilla bean cheesecake ganache and a buttery graham cracker crust. When she's in the mood for something nutty, she loves the hazelnut crunch with roasted hazelnuts, caramelized sugar, fleur de sel, creamy milk chocolate and a whole caramelized hazelnut hiding inside.

Slowly, Washburn has been expanding her product line to include confections besides her bonbons. She's started making her own chocolate-covered malt balls, chocolate-covered cranberries and dragées, all a part of her "Bliss Bites," as well as sponge toffee, which she admits she can't keep in stock thanks to the overwhelming demand for the trendy treat.

"We have such a high demand for that that we actually created a chocolate bar to use the trimmings from the sponge toffee, so that when we are out, we can kind of console people," she says.

As for future plans, the shop is still fairly new, so Washburn and her three-generation team are still pushing forward without too much upcoming change. However, as soon as it's safe to do so, Washburn hopes to offer classes all about chocolate.

Bliss Chocolatier is open from noon to 6pm Tuesday through Friday and 10am to 5pm on Saturdays.