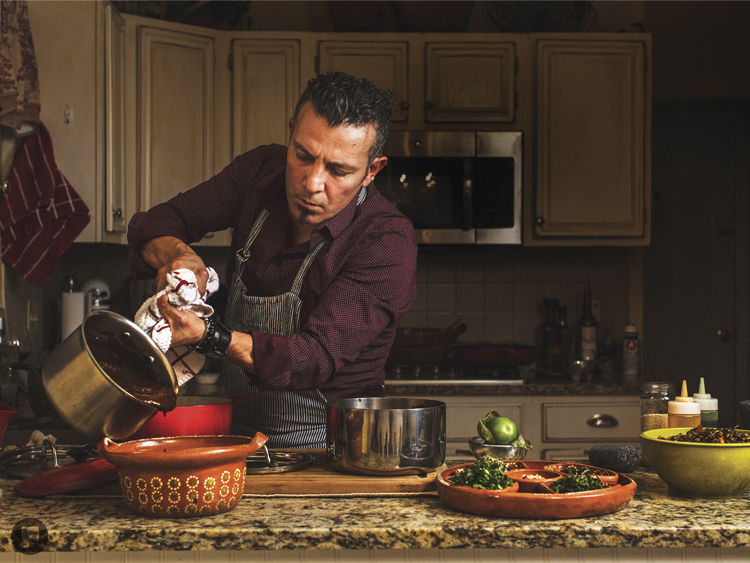 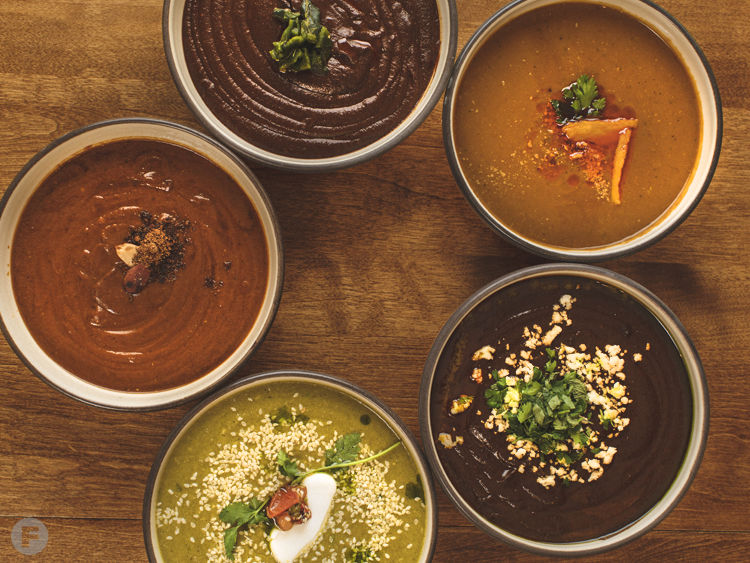 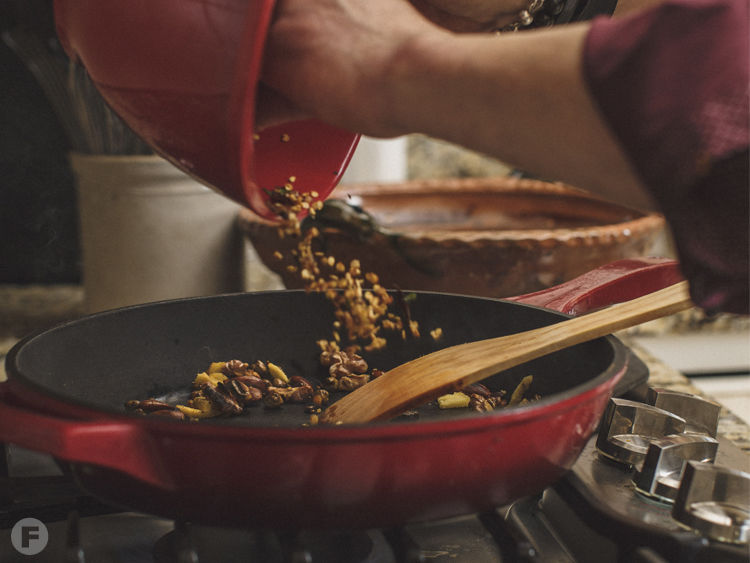 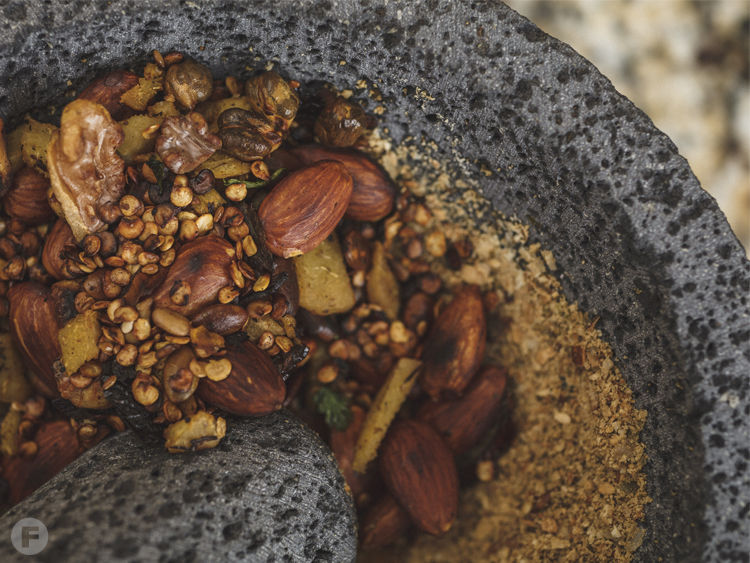 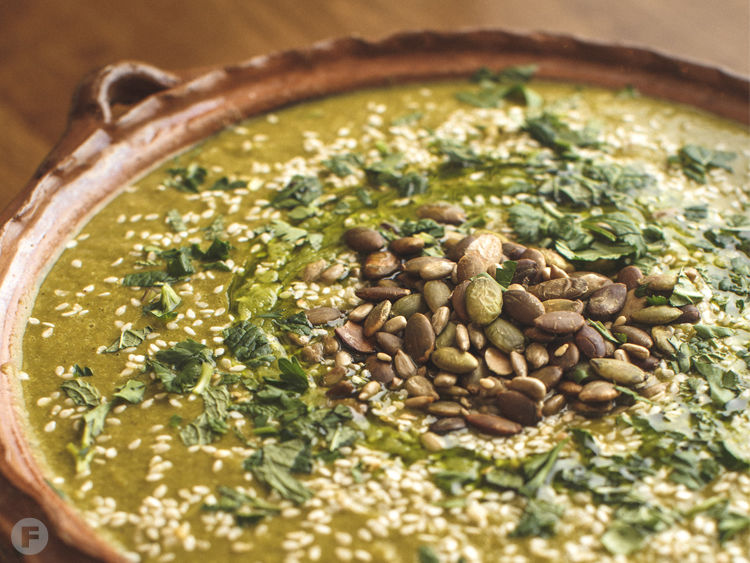 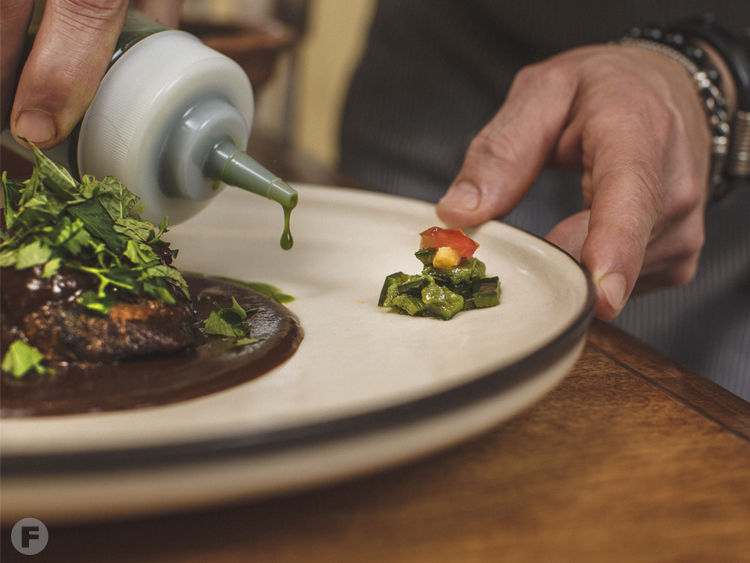 Tello Carreón has always been a curious cook.

Growing up in Guanajuato, Mexico, he loved to watch his mother and grandmother in the kitchen. When they’d prepare different variations of mole sauce, he’d watch them grind seeds and nuts by hand with a metate (a porous, three-legged version of a molcajete, or mortar). The process is deceptively simple: Add a little liquid and then grind, grind, grind. If you’re not careful, though, your nails may end up in the stone with those seeds.

“The first time I tried it, boom! I smushed pretty much all my fingers in there,” Carreón recalls with a laugh.

That childhood curiosity is still a hallmark of Carreón’s cooking today. After arriving in St. Louis to visit his brother and attend college, he worked his way through local restaurants from Caliente Cafe to Casa Gallardo to Café Provencal. He’s best known, however, for his work at Nixta, where he seamlessly blended Mediterranean flavors with those from his native Guanajuato. After helping owner Ben Poremba – who Carreón previously worked for as chef de cuisine at Poremba’s nearby Elaia – develop the concept, his bold cooking quickly earned raves from both local and national critics alike. Nixta was even named the ninth-best new restaurant in the country by Bon Appétit. Yet Carreón departed the restaurant this past October, saying that he felt it was time to move on.

Carreón’s undaunted approach is perhaps best illustrated in the multi-layered mole-based dishes he introduced at Nixta. Brisket, for instance, is braised in the thick, rich, coffee- and chocolate-infused Mole Negro de Abuelita Concepcion sauce. The showstopping grilled pulpo (octopus) – which Bon Appétit senior editor Julia Kramer named the best she ate all year – is served in a bath of nutty mole almendrado. In a 3½-star review, St. Louis Post-Dispatch critic Ian Froeb dubbed Nixta “one of the most exciting and best restaurants to open in St. Louis in recent years,” noting that – when compared to run-of-the-mill American Tex-Mex restaurants – Carreón’s cooking is “like turning on a 4K flat-screen after a lifetime of UHF stations on a tube TV.”

Regarding mole, Carreón wants diners to get one thing straight: It's so much more than the intensely chocolatey sauce known to many Americans. Such sauces are likely derivatives of traditional mole poblano, which features chocolate in addition to the requisite chiles, nuts, seeds and spices. Made famous in Puebla, it’s now the national dish of Mexico. When done right, the dark red or brown sauce is thick, rich, spicy, sweet and only slightly chocolate-tinged. Carreón says many versions served in the U.S. are overly chocolatey – the result of people adding the chocolate when they add the peppers. Carreón believes the chocolate should be added last, and that cooks should taste their mole and add chocolate as needed to balance out the spicy, bitter or acidic flavors.

To that end, true mole is all about balance; most recipes call for around 20 to 40 different ingredients, with some incorporating upwards of 100. Recipes vary from village to village and family to family, but, according to American chef Rick Bayless, who specializes in traditional Mexican cooking, mole ingredients can generally be grouped into five categories: Chiles (typically ancho, chilaca, poblano and pasilla) are essential, in addition to sour (tomatillos), sweet (dried fruits, chocolate or sugar), spices and thickening (nuts, seeds, toasted bread or tortillas) ingredients.

Carreón’s signature Mole Negro de Abuelita Concepcion is inspired by – and named for – his 94-year-old maternal grandmother, Ascensión Figueroa, but it’s not exactly the same recipe. Instead, Carreón remade the dish entirely from memory. As a chef, he considers one of his greatest talents to be duplicating recipes from memory – in this case, memories of his mother and abuelita cooking mole when he was a kid. “I never follow recipes,” he says. “I don’t copy from books. My plating and the composition of a dish is [from] my brain alone. I might have to do a dish several times until I come to what I’m comfortable with, but that’s my creation.”

Carreón made about seven different batches of the mole before he was confident that his stood up to his abuelita’s. He was even able to test the two side by side, as his mother shipped him a small sample of the mole via FedEx. “I was pretty darn close,” he says. “The flavor, the texture of my version – it was scary close.” His mole negro is rich – yet not heavy – and simultaneously light and earthy with a smooth texture. It’s complex, featuring distinguishable layers of chocolate, acid, pepper, nuts, natural sweeteners (like dates or fresh pomegranate seeds), different types of toasted dried corn and chickpeas. Carreón says that grinding all those spices and nuts in a traditional metate lends the sauce an earthiness that is absent when using a blender.

Like mole poblano, Carreón’s mole negro uses chocolate, in addition to cloves, cinnamon and cumin, yet it differs from his abuelita’s in a few ways. Instead of the traditional plantains (which he says can sometimes give the sauce an almost cloying sweetness), his mole is sweetened with Medjool dates, which also give the sauce a glossy shine. He also adds sweet, tart pomegranate molasses – his mother has a pomegranate tree in the backyard of their family home – to balance out the dish.

At home, Carreón prepares his mole in a traditional cazuela, a heavy-bottomed clay pot that imbues the sauce with even more flavor. “The hard work is about grinding, toasting, grinding and roasting all of the ingredients and then grinding them into a paste,” he says. Stock – usually vegetable or chicken – is then added to the paste and simmered until it reaches the desired thickness (Carreón likens the process to using a sourdough starter to make a loaf of bread). His family typically makes their mole a bit thicker – not too pliable or thin, but still easy to scoop up with a fresh tortilla. Cooking times vary by style: Mole verde takes about 30 to 45 minutes, while the added complexity of mole negro – which often includes up to 130 ingredients – results in a longer preparation and cook time of at least several hours, or sometimes up to a day.

In December, Carreón traveled home to Guanajuato to visit his family – including his abuelita – for what he describes as a bit of a “mole party.” The family spent time in the kitchen together cooking different types of mole and trading recipes and techniques. At first, Carreón says his mother was aghast at some of the unconventional ingredients he throws into his recipes,

including using nopales (tender cactus leaves) in a Mexican ratatouille or adding fennel fronds to black bean salsa. “I’m pretty crazy when it comes to ingredients,” he says. “My mother was like, ‘Whoa! What are you doing?’ But you have to bring the flavors to the next level. I don’t settle for plain. I like to play with flavors; I think you have to go beyond what you’re accustomed to tasting.”

Carreón says that growing up watching his mother and abuelita in the kitchen – including getting in trouble for trying to touch hot skillets and pots – helped him associate the kitchen with good aromas and good vibes.

“[My grandmother] said that your food will taste the way you feel,” he says.

“If you feel angry, your food is not good. You have to have a good ambiance in the restaurant or in your kitchen.”

To that end, Carreón hopes his cooking will bring back fond memories for diners. Once, while he was in the kitchen at Nixta, an elderly woman told him that his mole reminded her of when she was a child and her mother cooked the dish for her. Such memories are hard to come by, she said, so she planned to come back frequently. “That’s what I want,” he says. “That’s what makes me happy. That’s what gives me goose bumps.”

Carreón is still in touch with the woman, whom he nicknamed Teresita; he even bought her a gift when he was last in Mexico. For Christmas, Teresita’s daughter gave her mother a framed photo of Teresita and Carreón.

And diners might not have to wait long for more of Carreón’s inspired cooking: The chef is currently working to open a restaurant of his own in St. Louis, with catering and pop-up events planned in the meantime. He considers his recent trip home R&D for his upcoming restaurant; in addition to perfecting his mole recipes with his family, he also played around with heirloom varieties of corn grown by his father. He was particularly intrigued by a nutty, mildly sweet deep purple corn that he hopes to grow in the St. Louis area in partnership with a local farmer.

“I have thousands of ideas and I just want to put them on the plate,” he says. “[Initially], I was afraid of presenting these flavors, but now I know people want to explore different flavors and learn how a simple dish can have so much flavor in it. More than anything, that’s what makes me happy – to know that they welcome this kind of cuisine.”

More acidic than other styles of mole, this mole verde gets its striking green color from fresh herbs, extra pepitas, cilantro, tomatillos and avocado.

The key is to balance the earthy, nutty, sweet, salty and acidic flavors.

A take on traditional mole poblano, it uses dark chocolate from Kakao.