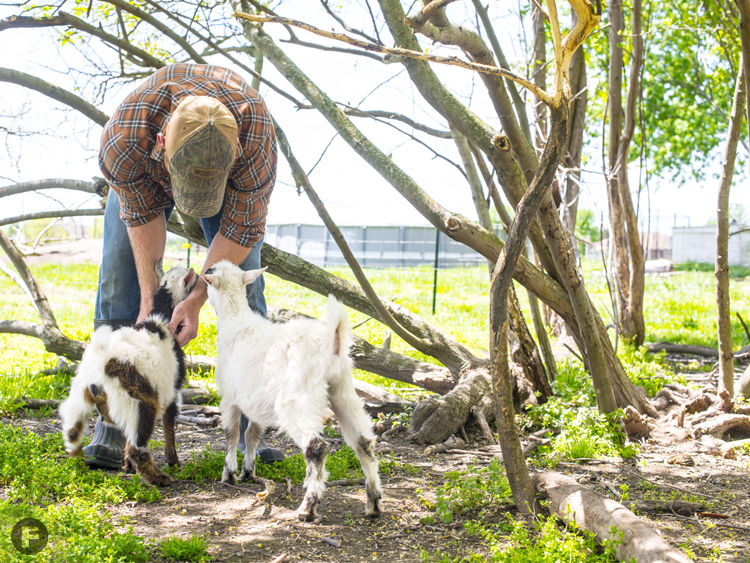 Green Thicket is also home to a small mixed herd of dairy goats that produce milk for a range of items. 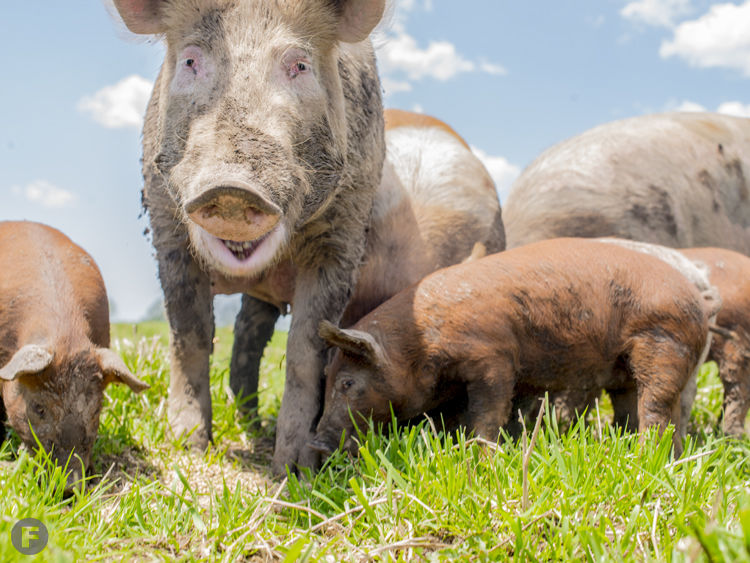 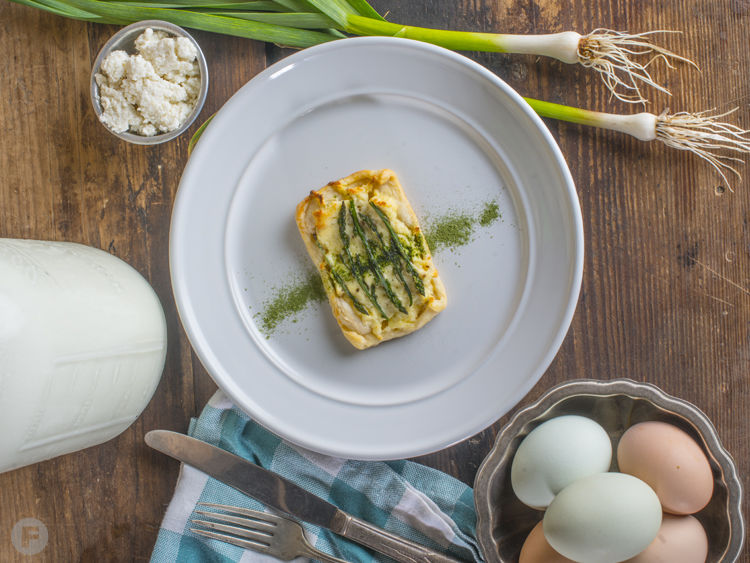 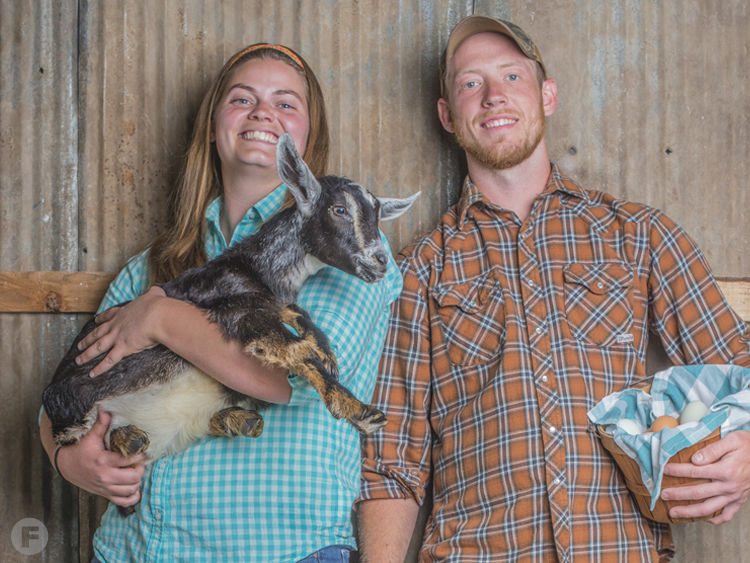 Farming was a natural career path for Klaire and Caleb Howerton. 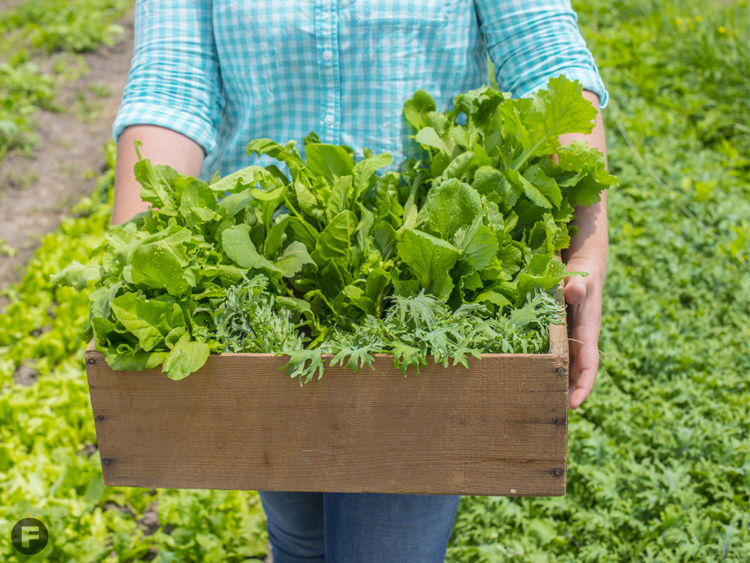 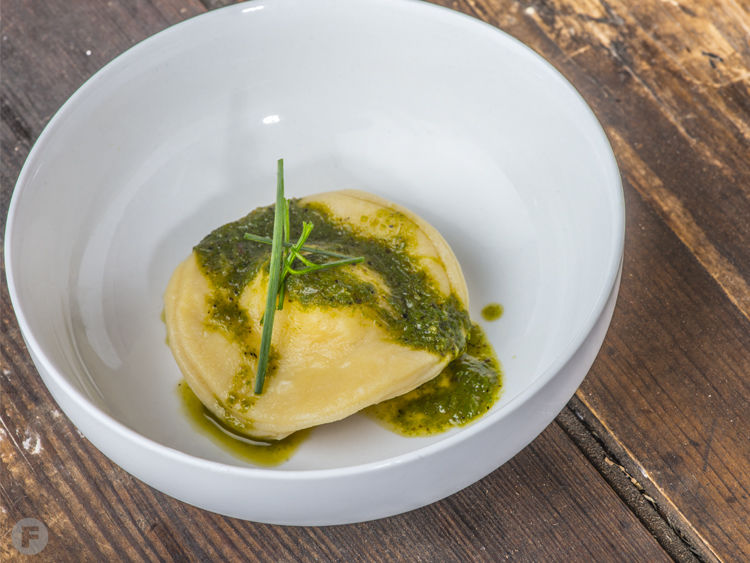 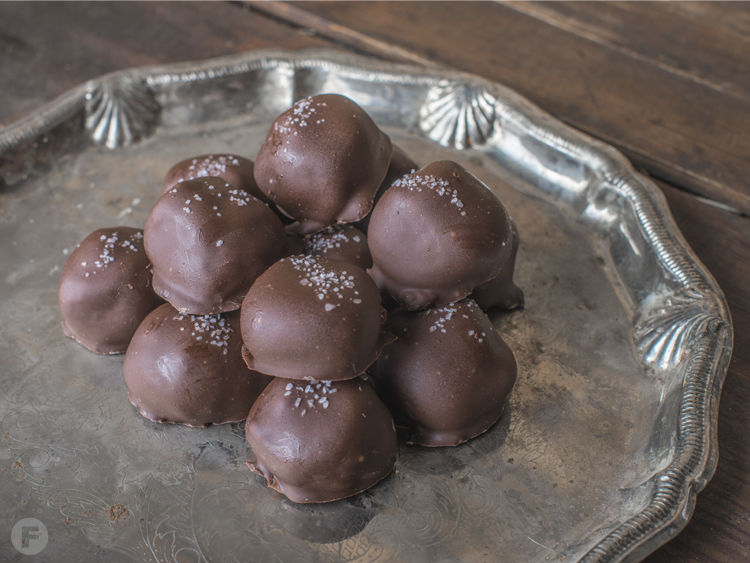 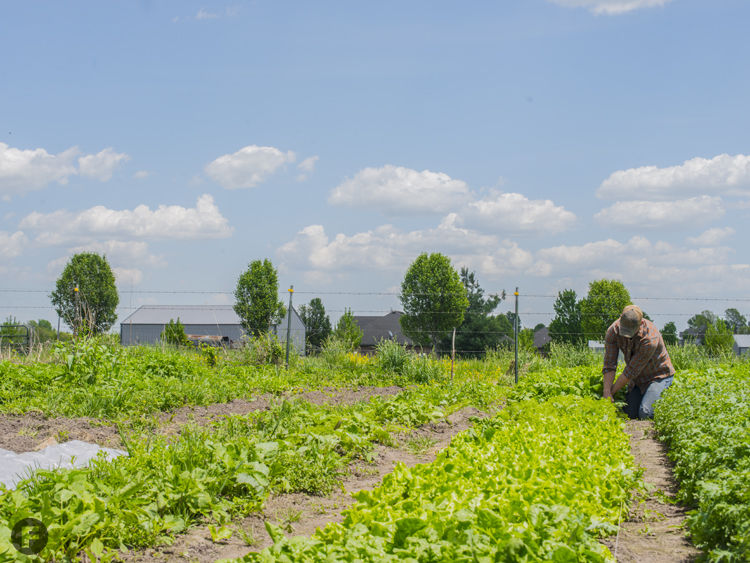 The farm is mainly a two-person operation. 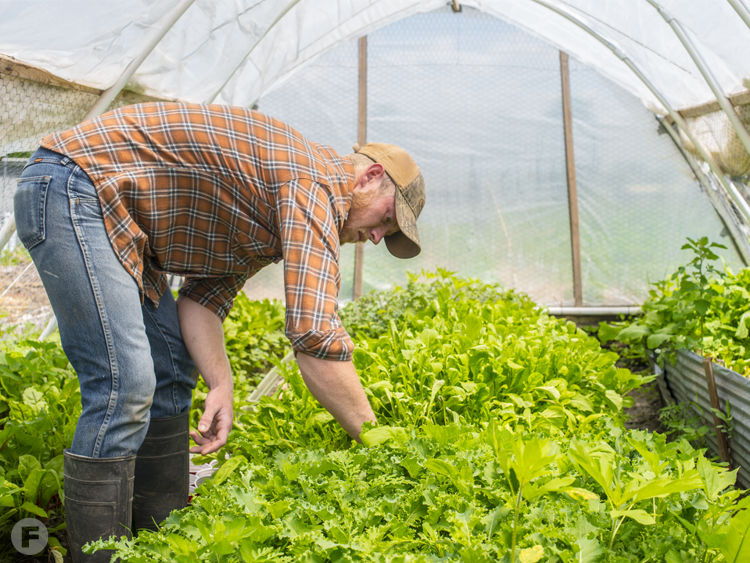 Caleb typically begins planning each dinner with a stroll through the farm to assess what seasonal ingredients are at their peak.

Green Thicket is also home to a small mixed herd of dairy goats that produce milk for a range of items.

Farming was a natural career path for Klaire and Caleb Howerton.

The farm is mainly a two-person operation.

Caleb typically begins planning each dinner with a stroll through the farm to assess what seasonal ingredients are at their peak.

Just north of Springfield, Missouri, Green Thicket Farm is home to a diverse cast of characters.

The property is regularly patrolled by a lively herd of goats, significantly more active than the hefty rabbits lazing in their hutch. Occasionally, a wayward hen makes her way into the pig enclosure, where she’s warily regarded by the hogs. In the middle of the action is the small farmhouse where farmers Klaire and Caleb Howerton live. The young couple have gained a local following for their Dinners at the Thicket, an unstuffy farm-to-table dining experience where they offer guests a taste of their farm-fresh fare while also sharing a behind-the-scenes glance at where their food comes from.

The breadth of Green Thicket’s offerings is impressive, especially given that the farm is mainly a two-person operation. The Howertons employ Klaire’s younger sister, Klee, as sous chef for the dinner series; other than that, Klaire and Caleb run the farm themselves. According to Klaire, farming was a natural career path for the couple; Klaire grew up on what she describes now as a “hobby farm,” and, as a kid, Caleb started his own “mini-farm” in his father’s backyard.

Today, Green Thicket raises a varied mixture of farm animals, including rabbits, sheep, quail, veal calves, hogs and more. According to Klaire, the choice to raise less-common farm animals resulted from chef demand and customer curiosity. “Once we started building our clientele, they were really interested in options outside of the traditional chickens and eggs,” she says.

In the past, Harvest Restaurant in Rogersville has served Green Thicket's rabbit tenderloin wrapped in pancetta with a galantine of rabbit shoulder meat, garlic-potato purée and a mushroom vinaigrette, while Farmers Gastropub in Springfield has featured the farm's soft-boiled quail eggs in a smoked chicken and bacon salad.

For some home cooks, there's still a learning curve for frying rabbit or roasting quail – but Caleb is working to change that. “Caleb is really good about educating customers who might want to try a more diverse selection,” Klaire says. “We’re happy to offer tips on how to prepare it.”

Green Thicket is also home to a small mixed herd of dairy goats that produce milk for popular items like the farm’s highly sought-after caramels, which are handcrafted with a recipe closely guarded by Caleb. “Goat milk has significantly less fat than cow’s milk, so we’ve put a lot of time into perfecting the final product," Klaire says. "The flavor is also noticeably different; there’s something slightly sweet. It’s creamy in a way that’s hard to accomplish with the texture of cow’s milk.”

Unpasteurized goat's milk is also available for sale at the farm, and goat cheese was just added to the lineup this spring. The Howertons grow greens, potatoes, tomatoes and turnips as well – produce that “people aren’t afraid to eat,” as Klaire puts it.

Green Thicket doesn’t vend at farmers’ markets; instead, a community-supported agriculture (CSA) program allows members to pay a monthly fee for a share of the farm’s bounty through one of two tiers ($250 for a full share or $150 for a half). Customers can pick up their shares on the farm, but delivery is also available at several retail locations in the area. “We wanted to do a model that would fit people who were on our own income level,” Klaire says. “We want local food to be available to everybody.”

In March 2017, the Howertons decorated a table in their garage and sold tickets to the first Dinner at the Thicket for just $35 for five courses. Today, the couple still hosts the dinners in the garage, although it’s been remodeled to serve as a cozy dining space with accommodations for up to 24 guests. The creaky garage door has been replaced with floor-to-ceiling windows, allowing diners to peer out at farm life as they enjoy their meals. During dinners, one long farm table is decorated with rustic centerpieces, and music plays softly in the background. (The renovations were accompanied by a small price hike: Tickets are now $45 per seat.)

The dinners are preceded by a farm tour and social hour, giving guests a glimpse into where and how their food was raised. The experience is casual, educational and fully hands-on. Baby rabbits are available for cuddling, and the Howertons’ energetic collection of well-trained farm dogs almost always make an appearance. After the tour, guests are invited to take their seats in the garage with a beverage of their choice: Tea and water are served with dinner, or you can bring your own alcoholic beverages.

All of the food is prepared by Caleb in the Howertons’ home kitchen, and the majority of the ingredients are grown on the farm; some, like various cheeses, are sourced from Edgewood Creamery in Purdy or Terrell Creek Farm in Fordland. Caleb learned basic kitchen skills at Ozarks Technical Community College in Springfield, but he’s largely self-taught. “I get inspiration from social media, but many of our courses are inspired by walking through our garden and [trying] out ideas in our kitchen," Caleb says.

The dishes are mostly familiar to guests – tacos and veggie-stuffed blinis, for example – but Caleb is careful to work more unexpected ingredients onto his menus. Last season, dishes included fennel-top ravioli stuffed with goat cheese, kale and caramelized onions, drizzled with sage butter and sprinkled with dehydrated fennel-top powder, and a kohlrabi latke with smoked pork belly and a green-garlic purée. Other dishes were topped with fried, hard-boiled or smoke-cured quail eggs.

Recently, Caleb has experimented with adding goat cheese to a cheesecake, garnishing a meat course with the farm’s mulberry-wine sauce and topping custard and streusel with a sorrel syrup. It’s just another way to show guests the versatility of fresh food, Klaire says.

“We try to focus on what people want to eat and not what looks extravagant on a plate,” Caleb says. “While beautiful plates inspire me, and plate aesthetic is important, I’d rather have a guest gush over the depth of flavors a great pasta dish can hold, rather than how ornate it is.”

Caleb typically begins planning each dinner with a stroll through the farm to assess what seasonal ingredients are at their peak. As at any farm-to-table restaurant, the menu varies widely depending on ingredient availability. That’s just fine with Caleb, who prefers not to repeat dishes. However, certain menu items are frequently in demand after receiving word-of-mouth praise from previous dinners.

“I’m very partial to many of our pasta dishes,” Caleb says. “[They’re] often some of our guests’ favorites – especially when they find out every noodle is handmade.”

Caleb's ever-changing crème brûlées are another favorite, made with additions such as chocolate from Springfield-based Askinosie Chocolate. Other desserts have incorporated the award-winning chocolate as well, including chocolate waffles with fresh whipped cream, a cocoa-nib ganache and cocoa nibs for garnish.

The dinners were a welcome addition to the Howertons routine; Klaire says she was pleased with the attention the farm received last year. “We started to get [media coverage] last summer, and I was so excited about the response,” she says. “By the end of the year, I was amazed that we had fed hundreds of people in our garage.”

Klaire says that her favorite part of the dinners is introducing visitors to the often unpredictable nature of life on the farm. That includes addressing challenges like weather – especially when a meal is met with a downpour.

“It was tough to make sure people were dry and comfortable when the weather was unpredictable,” she says. “But it ended up being a great way to educate [guests] about the things we have to deal with on a daily basis. Weather is such a crucial part of a farm’s day-to-day operations, so it’s fitting that guests would be immersed in that as they’re trying to get a feel for life on the farm.”

Klaire also recalls one especially popular dinner during which a rogue chicken strolled into the garage for a visit. “If the health department calls, tell them we were visited by the world’s cleanest chicken,” she laughs. “People really enjoy things like that because it gives them a real look into our day-to-day.”

Caleb agrees that diners are typically delighted by the insider peek at life on the farm. He also finds that people are often surprised and impressed by the sophistication of their operation. “The size of our farm amazes many of our guests, because of all that we accomplish on six acres,” he says.

The Howertons conclude most of the dinners with a coffee and dessert hour, at which point they usually emerge from the kitchen to chat with guests about their work on the farm. Klaire says that many of those conversations end with new CSA members, a pattern the Howertons hope continues throughout the 2018 season.

“A lot of our guests are so interested in getting more plugged into farm-to-table dining and cooking, but they don’t know where to start,” Klaire says. “People are always really excited to see where their food comes from and to get some tips on preparing local food themselves.”

Ultimately, Dinners at the Thicket are a casual, approachable way for guests to experience the challenges, rewards and quirks of farm life – all while enjoying fresh and creative fare.

“The dinners help us reconnect with the work that we do,” Klaire says. “They’re a culmination of everything we do on the farm, and we love sharing that with people.”

Menus are not yet final for the 2018 pop-up dinner series. Tickets for the 2018 season are now available at 417tix.com.