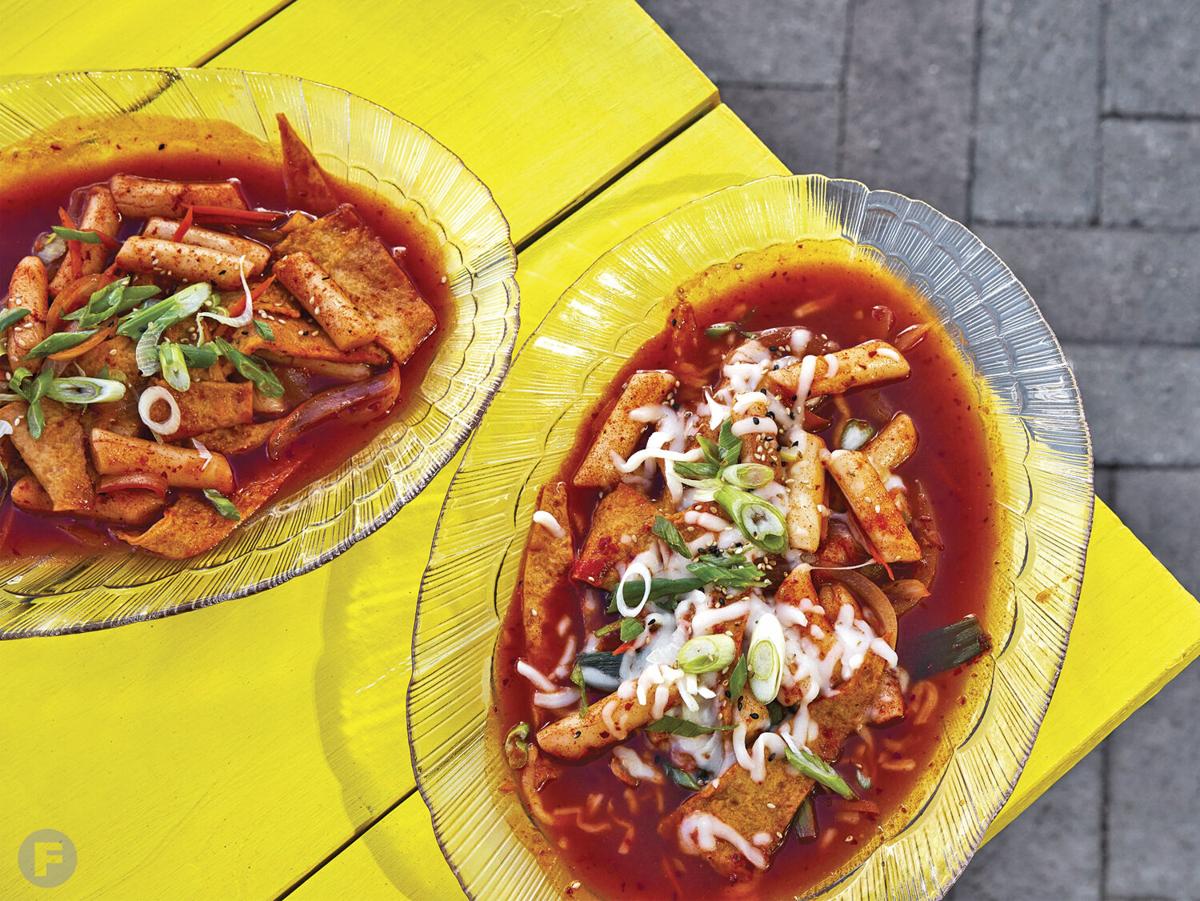 Tteokbokki at K-Bop in St. Louis. 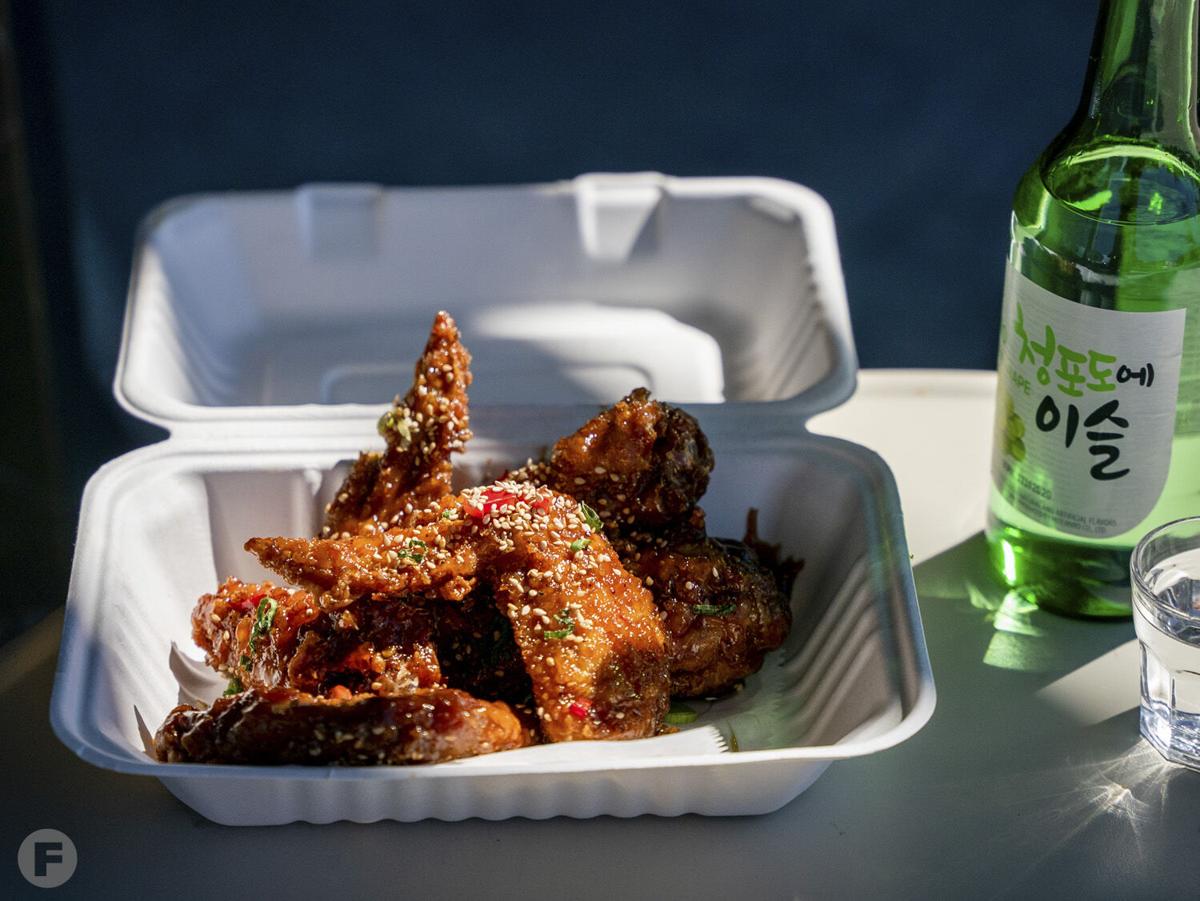 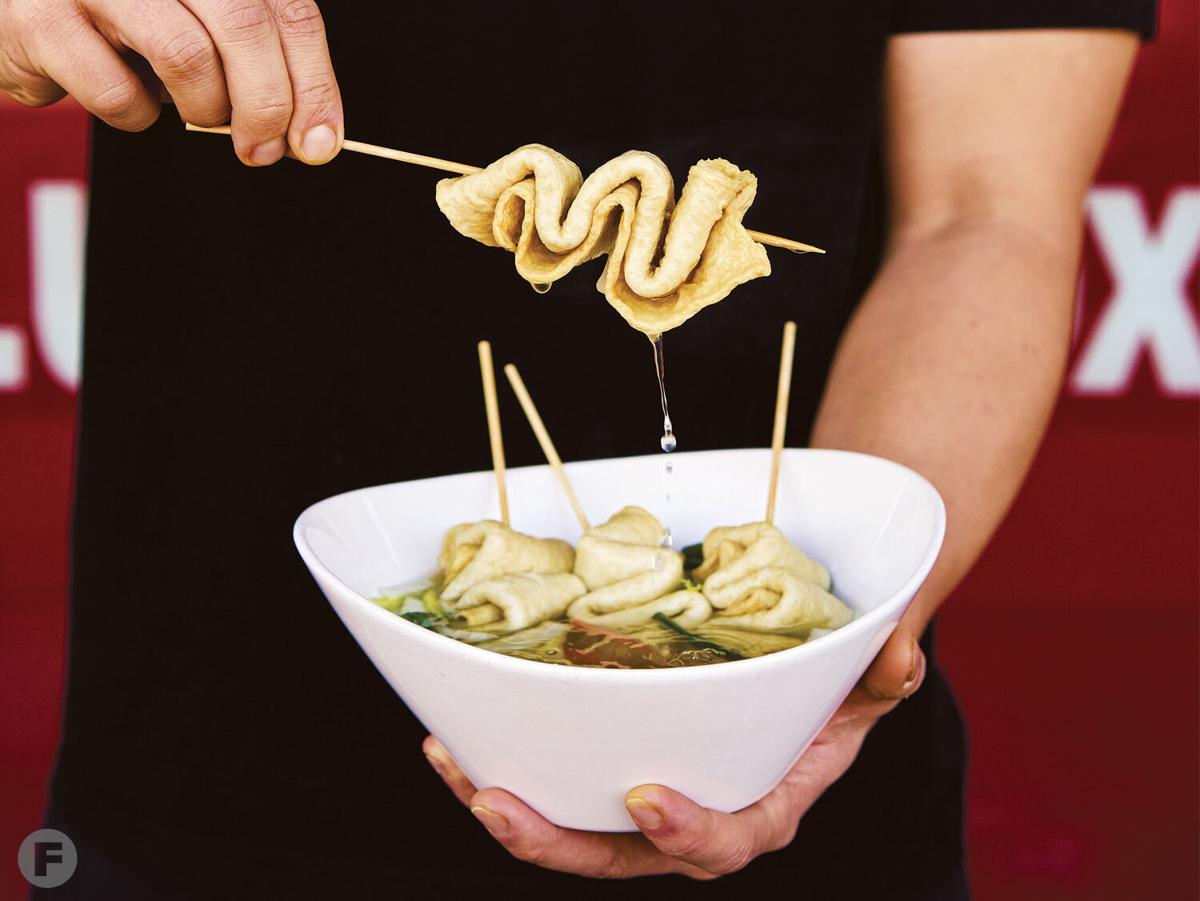 Uhmook at Sides of Seoul in St. Louis. 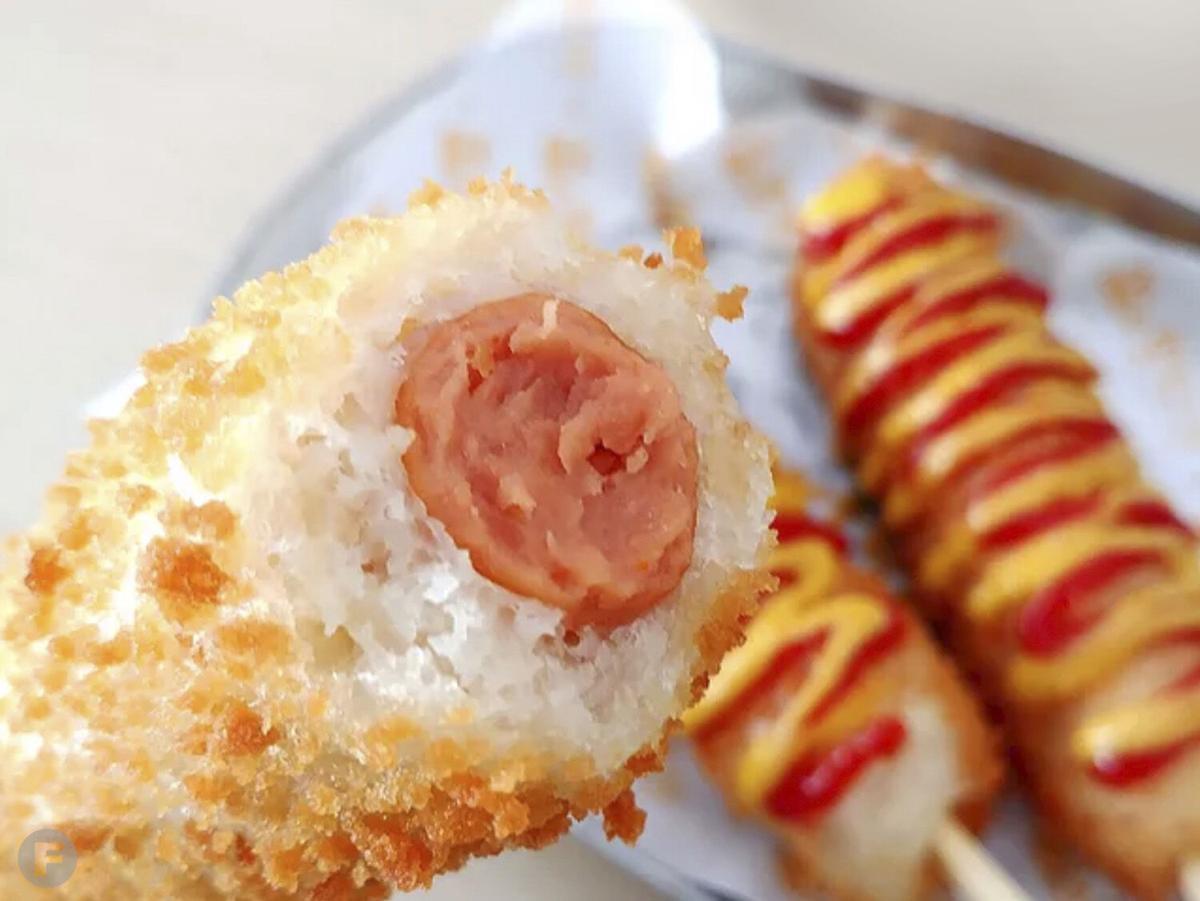 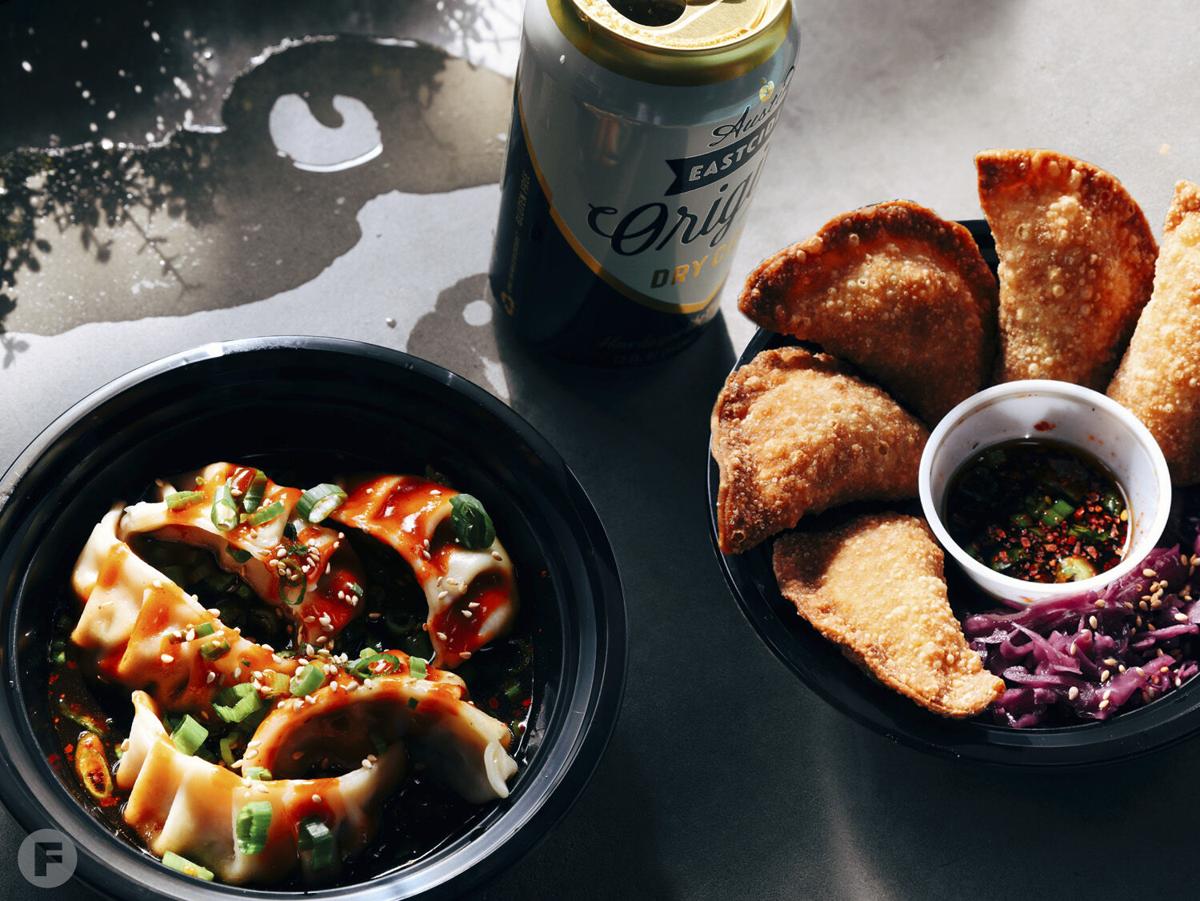 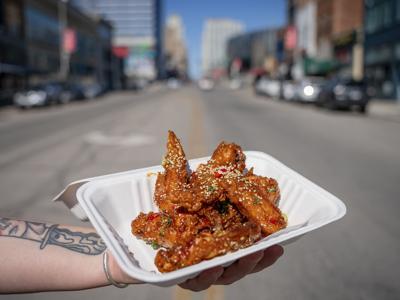 Whether you’re grabbing a skewer while making your way through a crowded night market or gathered under a pojangmacha (outdoor tent) with some spicy tteokbokki and a shot of soju, street food is a cornerstone of Korean culture. Fast, cheap and bursting with flavor, these dishes are designed to be eaten on the go, and they bring all walks of life together to gather at the carts, stalls and walk-up windows lining the streets.

And for many who grew up in the country, street food reminds them of their roots. “I probably speak for every Korean: When we think of those items, it feels like home,” says Keeyoung Kim, chef-owner of Kansas City’s Sura Eats. “There’s a hominess to it.” Here, Kim and four other local restaurant owners suggest a few dishes to start your Korean street food quest. –Kasey Carlson

“The way I’ve experienced street food in Korea is through the little convenience stores that I’d always go to after school, starting when I was in grade school. They always sell tteokbokki and fish cake soup. You grow up with tteokbokki, so you’re really familiar with it from a young age. It’s really affordable and fresh. Even in middle school and high school, you always go eat tteokbokki after school, so it has a lot of memories. The rice cake itself doesn’t have much taste, just texture – it has a really good chewiness – but the gochujang sauce gives it a really good bite. We call it a spicy rice cake, but it has a sweetness to it too because of the gochujang – which is spicy and a little sweet at the same time – and the gochugaru. At K-Bop, we serve it with a sauce made with fish cakes and a small amount of vegetables, including onions, carrots and green onions. And actually, in Korea now, it’s getting very popular to add cheese to a lot of dishes, so tteokbokki with cheese is very popular. If you put some cheese on the dish, it makes the spiciness milder, and I also think Korean gochujang goes very well with the cheese.” –Hye Keeley, K-Bop, St. Louis

“Initially, when fried chicken was introduced to Korea, it was through the American troops that were stationed there during the war. Americans would have a bunch of stalls selling traditional fried chicken, and the Koreans started catching onto that and doing their own version. They started making the dish more bite-size, more accessible. The wings are cut in half where the wings meet the drum, but it’s definitely bone-in. It’s also gonna have more of a sauce on it than American fried chicken – initially, Koreans came up with this version, which is now known as Korean fried chicken, because they noticed customers having a hard time with the hard-fried, crunchy parts of the chicken, so they added a wet sauce on it. The sauce is always gonna have a little bit of sugar, a little heat, soy sauce and garlic – Koreans love garlic. You heat it in the pan so it caramelizes and then toss it in that sauce. At Kobi-Q, we use my mom’s recipe, which is a common Korean recipe with sugar, soy sauce, lots of garlic, gochugaru and scallions, which are such a key ingredient in Korean cooking. In Korea, fried chicken is also typically served with pickled daikon. We don’t do it at our restaurant, per se, but it is typically served like that as opposed to with just rice.” –Mila Lee, Kobi-Q, Kansas City

“When we decided to open Ssong’s Hotdog, we thought about what was missing when it comes to Korean food in Kansas City, and it occurred to me that there wasn’t anyone specializing in Korean hot dogs, which are closer to American corn dogs. I don’t necessarily remember when I first tried one, but Korean hot dogs are one of the things I always got whenever I passed a food cart, and they’re still one of my favorite foods. They’re crispier than the American version – the outside is more like a bread crumb coating, which gives the dish a little more crunchiness. There are also different varieties of hot dogs stuffed with cheese, kimchi, noodles and so on before they’re breaded. At Ssong’s, I’m most excited about serving kimchi hot dogs and japchae hot dogs, just because those are fillings that people don’t expect. It’s usually a really cheap snack in Korea – if you’re walking by and you’re hungry, it’s something you can get quickly.” –David Ahn, Ssong’s Hotdog, Kansas City

“People hear ‘fish cake’ and it doesn’t sound very appetizing, but it actually doesn’t taste like fish at all. Uhmook does feature fish, but not straight fish – it’s minced to the point that you probably wouldn’t know it was fish unless someone told you. Then you add salt, water, a little bit of flour, potato starch and a little bit of egg to form it into the fish cake. It’s served with a broth made with a little bit of white and green onion and carrots, which adds a depth of flavor. The fish cake is usually served on a stick, and at every place I’ve tried it, it’s served inside the broth, which allows it to absorb a lot of that broth flavor. It’s chewy yet soft and savory when you drink it with the broth, which is very light yet hearty at the same time. You know how there are some tastes you cannot describe? You just have to try uhmook.” –Terry Lee, Sides of Seoul, St. Louis

“What sets mandu apart from other Asian dumplings is the filling. The wrappers that different countries use for their potstickers or dumplings (in Korea, we call them mandu pee, which means dumpling wrappers) will vary, too. Most notably for Korean culture, we use a lot of japchae, stir-fried sweet potato glass noodles, to fill our mandu, and I think that’s probably one of the biggest differentiators. It doesn’t add much flavor, but it acts as a great filler and also adds some texture to the dumplings. The ones I grew up eating – and have seen at street stalls – have pork, scallions, mushrooms and sweet potato glass noodles as the main ingredients. Other variations have tofu and kimchi as well. Our version at Sura Eats is slightly different but based on those; we also use pork and green onions. We have a pork and kimchi mandu that we do from time to time, and then we have a tofu one that has similar ingredients. We serve ours boiled and deep-fried, just for that added crunch.” –Keeyoung Kim, Sura Eats, Kansas City