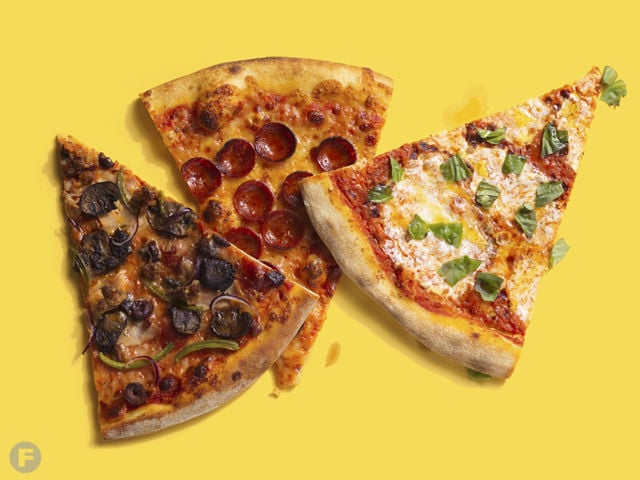 Pizza Tree is the only shop in Columbia to offer pizza-by-the-slice all day, every day. 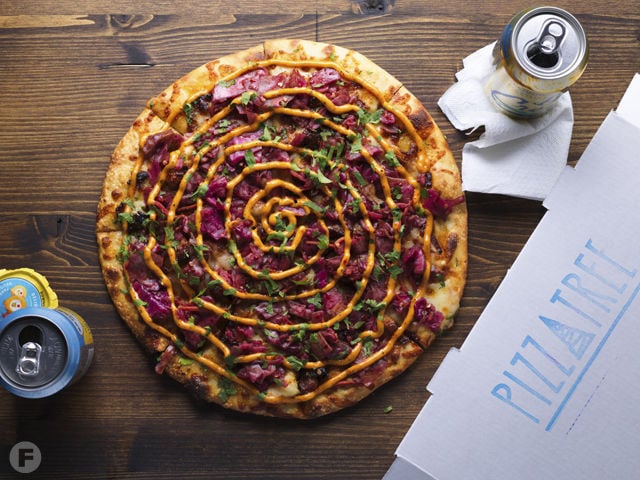 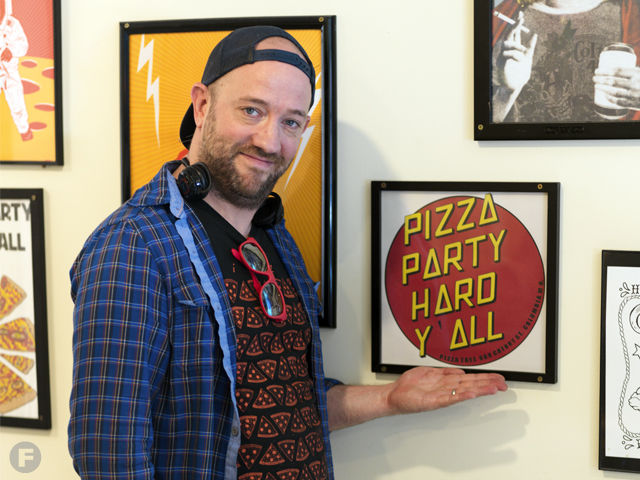 The walls are decked out with owner John Gilbreth’s own collection of pizza-inspired art. 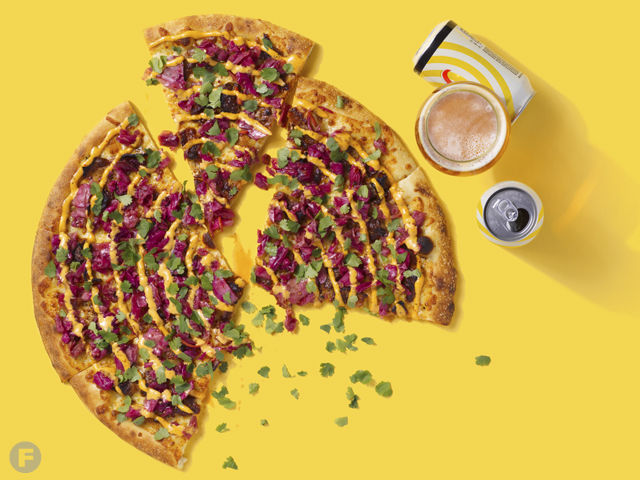 Some pizzas, like the bánh mì, feature combinations that are familiar to diners – just not on pizza. 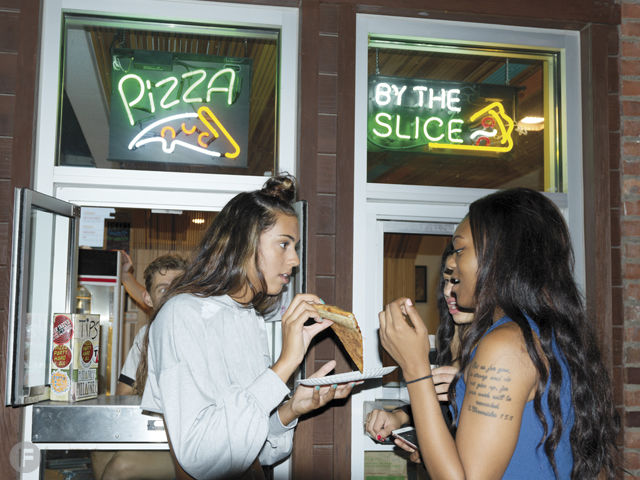 During the school year, slices, including cheese, pepperoni and one “wild card” option, are available until 2am. 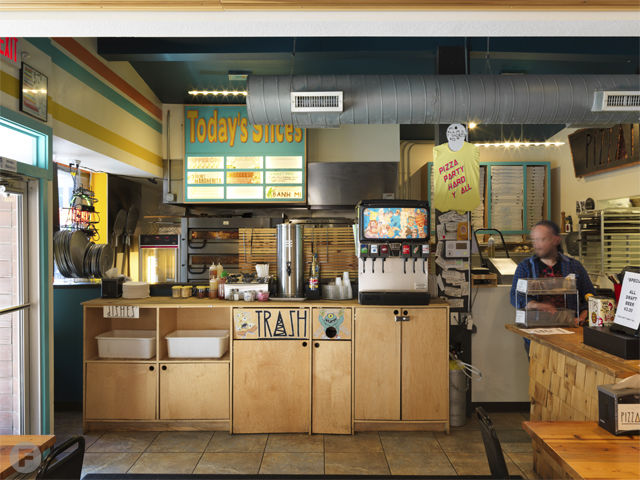 Although small, the space reflects the personalities of Pizza Tree’s employees.

Pizza Tree is the only shop in Columbia to offer pizza-by-the-slice all day, every day.

The walls are decked out with owner John Gilbreth’s own collection of pizza-inspired art.

Some pizzas, like the bánh mì, feature combinations that are familiar to diners – just not on pizza.

During the school year, slices, including cheese, pepperoni and one “wild card” option, are available until 2am.

Although small, the space reflects the personalities of Pizza Tree’s employees.

The sourdough starter at Pizza Tree has a name. Seymour gets fed twice daily, depending on how much pizza dough needs to be made on a given day – sometimes less, and definitely more when school is in session at The University of Missouri (more commonly known as Mizzou). Hell-bent on making “the most amazing pizza dough ever,” owner John Gilbreth started the sourdough culture five years ago at the pizza shop’s original location inside local concert venue Mojo’s (now the Rose Music Hall). He’s kept Seymour alive in the tiny kitchen inside Pizza Tree’s current digs at 909 Cherry St. in the heart of downtown Columbia, Missouri, ever since.

“It makes [the pizza] a little different, it improves digestibility and gives it just a little extra flavor,” Gilbreth says. “It’s something I really believe in; it’s something that sets us apart.”

But it’s certainly not the only thing that sets Pizza Tree apart.

Gilbreth’s first pizza-making experience was an admittedly modest one: When he was 16, he worked at a sandwich shop in Joplin, Missouri, that served a few pizzas. He’d assemble the pies and run them through a small conveyor oven; although Gilbreth says it was hardly a career-defining experience, he found he really enjoyed working in restaurants. He then moved to Columbia in 1999 and attended classes at Mizzou for two weeks before dropping out and landing a job at the storied Shakespeare’s Pizza. He started as a delivery driver, working his way up the ranks over several years to bartender and then shift manager. At 25, after seven years at the venerable pizza joint, he decided he was ready for a new challenge. After trying his hand at what he calls a “big boy” job in the entertainment industry that took him to cities across the country, he found himself back in Columbia a few years later. Falling back on his previous restaurant experience, he got a job at Broadway Brewery and soon fell into the swing of things. “I was like, ‘Oh my god, what was I doing?’ Why did I leave this?’” he says.

Gilbreth considers Broadway his first true kitchen job. On his third shift at the restaurant, a manager put him on the pizza station, where he was shown how to make dough, top pies and load them into the oven. All of the sudden, he says, it hit him – he already knew how to do everything. “It was like riding a bike, you know?” he says. “I loved doing it and I got obsessed. From then on I just turned into a pizza-making beast.”

Gilbreth began reading all the pizza-making blogs and articles he could find in order to improve the pies at Broadway. After about two years of putting out pizzas at the brewery, he decided to take the leap and open his own shop. But first, he embarked on a self-described “pizza odyssey,” visiting 35 pizzerias throughout the Northeast in just 34 days. (He would have visited more, he says, but he got trapped in Brooklyn during Hurricane Sandy.)

Gilbreth drove his truck up and down the East Coast, visiting famous pizza parlors including Lucali and Roberta’s in Brooklyn as well as Frank Pepe’s and Sally’s Apizza in New Haven, Connecticut. As part of the R&D process for his new shop, he visited several wood-fired and authentic Neapolitan-style spots. “I learned that I’m not Italian,” he says with a laugh. “I didn’t want to emulate that; I wanted to be a little more authentic to myself. I really fell in love with big fat slices from an 18- or 20- or 22-inch pizza.”

But the spot that resonated the most with Gilbreth was the quirky Pizza Brain in Philadelphia, which serves brick-oven pies with names like Henrietta Blanch and Bob Shieldsmoose. Toppings are just as unusual, ranging from hot dogs and coffee-cured pastrami to vegan Thai peanut sauce and tandoori masala barbecued chicken. The restaurant also boasts the world’s first pizza museum. “It was just fun, number one,” Gilbreth says. “It looked like they were having a blast. They were putting funny stuff on their pizzas that actually really looked good. I was like, ‘This is cool; this is it. These are my people. This is the calling.’”

Armed with “too many ideas” collected during his travels, Gilbreth returned to Columbia and – just a few weeks later – opened Pizza Tree in a tiny shotgun kitchen at Mojo’s in early 2013. Working alongside his former Broadway Brewery manager, Jay Westcott, Gilbreth began putting out creative pizzas like the Charredachoke Island (roasted red pepper sauce, charred artichokes, Kalamata olives, red onion, Feta, olive oil and a generous sprinkling of fresh arugula) and Ranch Hands (a riff on a cheeseburger pizza with buttered onions, ground sirloin, peppered bacon and white Cheddar). “I felt really energized by it,” he says. “We were making crazy, off-the-wall pizzas.”

The pizzas certainly got Columbia’s attention, but Gilbreth says trying to operate a full-service pizza shop inside a bar and music venue wasn’t feasible for the long haul. Diners had trouble getting to Pizza Tree during shows without a ticket, for instance, and sometimes the sheer sound of the bass would knock the phone off the hook. After about a year, the shop closed for a brief hiatus while Gilbreth launched a Kickstarter campaign to open a “full-fledged pizza spaceship machine,” or, in other words, a brick-and-mortar location. Columbia was clearly hungry for more of Gilbreth’s atypical pies: Within just 11 days, he had surpassed his goal of $11,111 (the campaign ended up raising more than $12,000). When Pizza Tree officially reopened in its new home on Cherry Street in October 2014, it ran out of dough in just two-and-a-half hours.

Pizza Tree describes itself as “Columbia’s funnest pizza shop,” and after one step inside, you’d be hard-pressed to argue. The walls are decked out with Gilbreth’s own collection of pizza-inspired art, including a portrait of Spock encouraging diners to “live long and eat pizza” and Freddie Mercury singing “another one bites the crust.” A few are emblazoned with the shop’s logo, “Pizza party hard, y’all,” and Pizza Tree’s official mascot: Gilbreth’s corgi, Banjo. Although small, the space reflects the personalities of Pizza Tree’s employees – almost everyone on staff plays in a local band or is involved in the art or music scene in some way.

The pepperoni pizza, made with cup-and-char pepperoni coins from Ezzo Sausage Co. in Columbus, Ohio, makes up around half Pizza Tree’s sales, but the shop is best known for its creative – and creatively named – pies. A few staples will always be on the menu, including classics from the Mojo’s days like the Charredachoke Island, Ranch Hands, bánh mì and truffled crimini. The shop also runs new specials almost every week, although Gilbreth says he tries to keep the pizzas approachable and identifiable. “I don’t want to weird people out too much,” he says.

Instead, pizzas feature combinations that are familiar to diners – just not on pizza. The Corne Asada, for instance, is a take on a Mexican street taco with corn purée, white Cheddar, queso fresco, carne asada, pico de gallo, salsa verde and fresh cilantro. A riff on the traditional Vietnamese sandwich, the popular bánh mì pizza features Sriracha-glazed pork belly from local Patchwork Family Farms, striking housemade purple kimchi, fresh cilantro and a chile aïoli that’s drizzled over the pizza in a mesmerizing spiral.

“Not only do we make crazy and weird pizzas, but they’re also really good,” says daytime manager Justin Nardy, who used to grab slices at Mojo’s before joining the team and helped Gilbreth open the Ninth Street shop. “Our ingredients are top notch. We make many ingredients in house, and use [high-quality] meat, and all of that shows on the final product. When you provide quality service with a unique product that people can't get anywhere else, you get a recipe that works – that’s what keeps people coming back.”

Gilbreth and his team also don’t cut corners when it comes to the execution of their quirky pizzas. The “New York-esque” pizzas bake for around 5½ to 6 minutes in a 590ºF electric deck pizza oven. Starting at around 9am, the team begins cutting vegetables, mixing dough, shredding cheese and making sauce – including housemade ranch dressing – and they do this every day. “It seems so cliché to say, ‘Everything’s really fresh,’” Gilbreth says in a playful voice. “Papa John’s says that; it doesn’t really mean anything. But [our pizza] is fresh.”

Pizzas are available in 12- and 18-inch pies or by the slice (take a look at the light-box menu board to see the day’s slices), and the shop also offers delivery. Gilbreth says the Pizza Tree team can bust out around 250 pizzas a day “when we’re rocking.” That number tends to be lower in January and July; since Columbia is a college town, the business is fairly seasonal. But on Thursday, Friday and Saturday nights during the school year, students flock to Pizza Tree for sustenance after bar hopping downtown. “We’d turn the lights down low, turn the music up pretty loud and a sell a lot of slices,” Gilbreth says. “I mean, we party too, right?” The shop originally opened its doors for late-night service, but ended up installing two walk-up windows out front to better meet the demand of hungry students. Slices, including cheese, pepperoni and one “wild card” option, are available until 2am.

Slices are the backbone of Pizza Tree’s business; the shop is the only one in Columbia to offer pizza-by-the-slice all day, every day. Gilbreth sees it as a way to make his food accessible to everybody. If you want to order one slice of cheese and one slice of the veggie-loaded Wabbit Food, you can. It’s a simple concept, really, but one that students and locals alike have wholeheartedly embraced.

“A lot of it was just the market – there was nobody in town really trying anything too different on top of their pizzas,” Gilbreth says. “People in Columbia want double pineapple and ranch on their pizza, and I’m totally happy to provide that.”

From cardamom buns to flaky croissants, sisters Uliana Komodi and Christina Sava serve up a taste of their native Moldova in Springfield