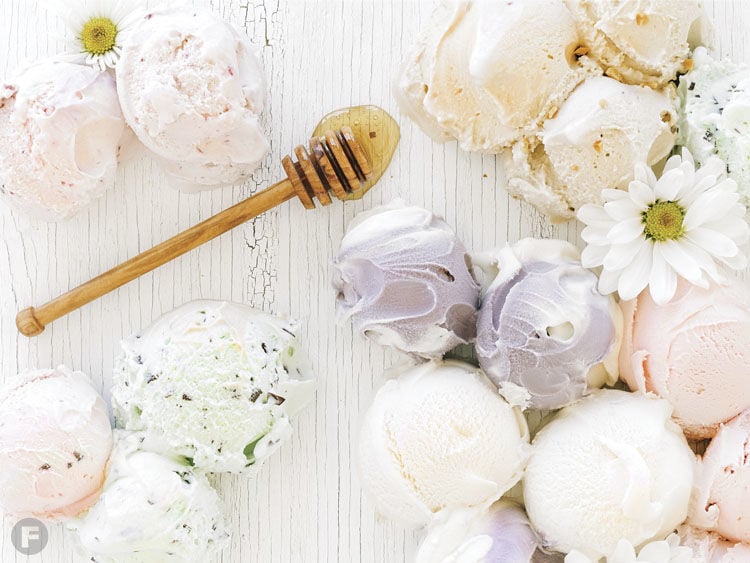 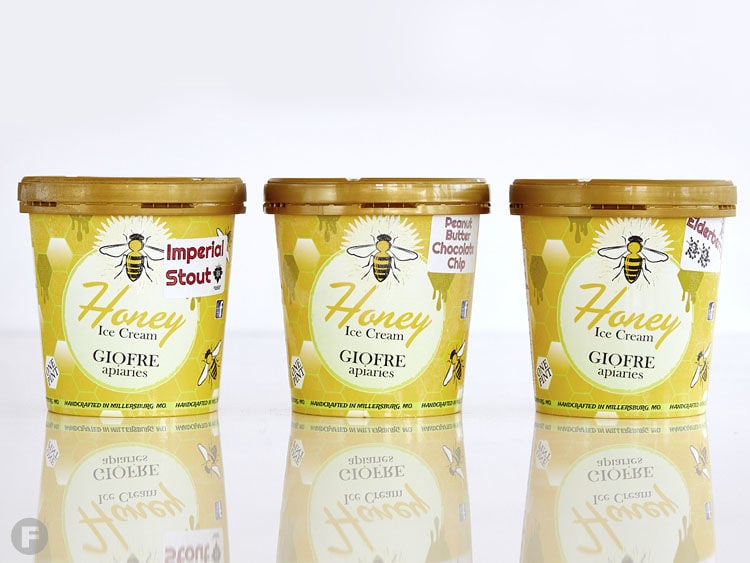 The pints of ice cream feature facts about honeybees. 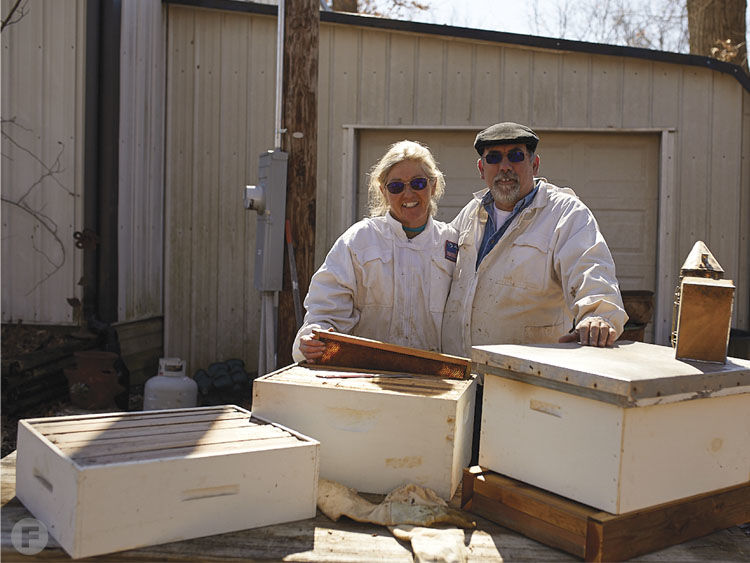 Nancy and Domenic Giofre started keeping bees as a hobby back in 2009. 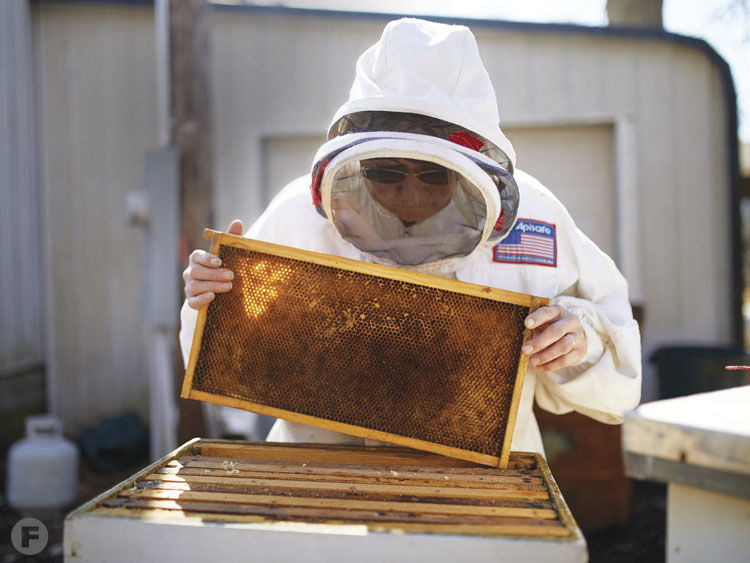 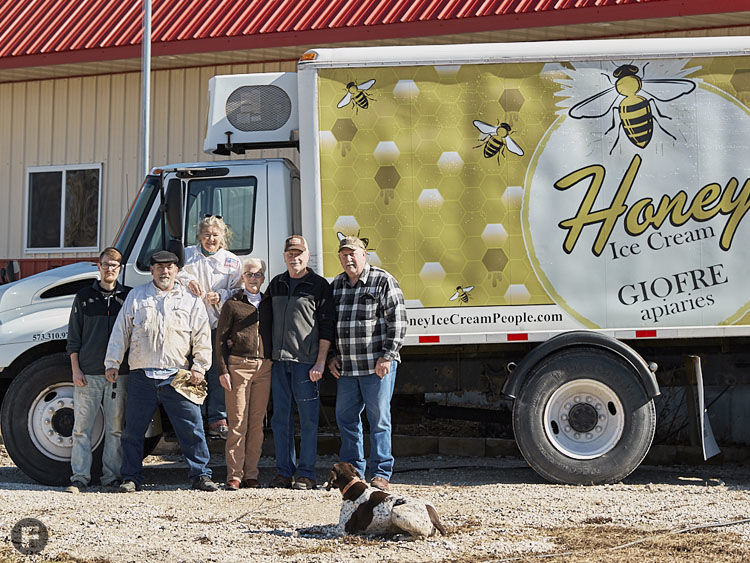 The Giofres' operation is small; the production facility is located across from their house in Millersburg. 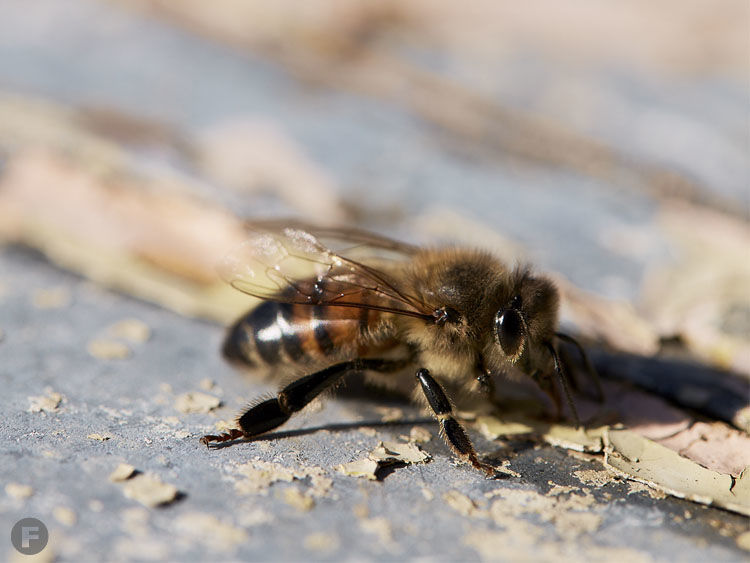 The Giofres know bees are the backbone of their business. 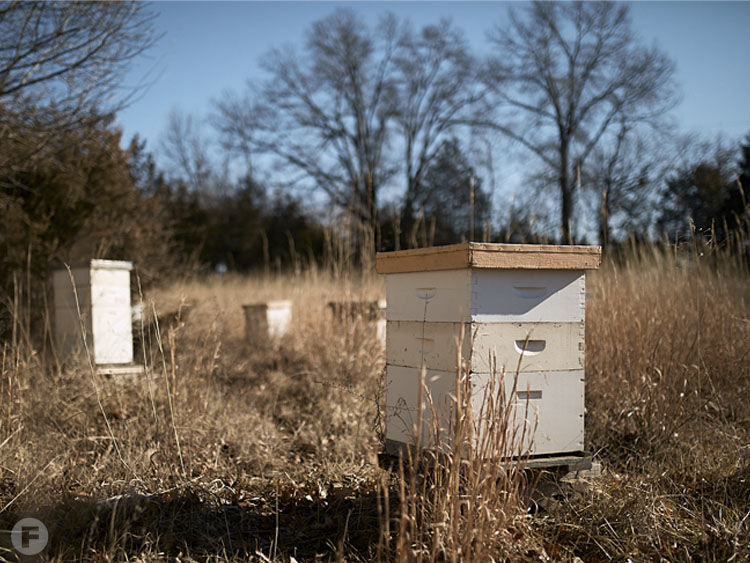 The Giofres manage about 75 hives spread across their property, as well as on neighboring lots.

The pints of ice cream feature facts about honeybees.

Nancy and Domenic Giofre started keeping bees as a hobby back in 2009.

The Giofres' operation is small; the production facility is located across from their house in Millersburg.

The Giofres know bees are the backbone of their business.

The Giofres manage about 75 hives spread across their property, as well as on neighboring lots.

Printed on the side of a pale yellow pint of elderberry-honey ice cream, between the nutritional facts and a small cartoon black-and-white honeybee taking flight, is a somewhat sobering quote: “If the bee disappears from the surface of the earth, man would have no more than four years to live.”

The quote, most often attributed to Albert Einstein, underlies the mission of Giofre Apiaries in Millersburg, Missouri, about 20 minutes outside of Columbia. Here, Nancy and Domenic Giofre produce more than 25 flavors of silky, honey-sweetened ice cream ranging from classic vanilla, chocolate and salted caramel with bacon to banana-walnut, gooseberry and root beer float. The couple focuses on more than just producing sweet treats, though: They’re determined to help educate consumers about the serious environmental issues facing honeybees, one pint at a time.

The Giofres started small, keeping two honeybee hives as a hobby back in 2009. A longtime gardener, Nancy joined the Boone Regional Beekeepers Association to pick fellow beekeepers’ brains: When should you extract honey from the hive? How often should you open up the hive? When do certain flowers start blooming? Yet even with that support system, there was still a learning curve. During the couple’s first honey harvest that summer, Nancy pulled a small red wagon behind her to haul the hives around the field. While stopping to collect honey, she placed a super (which holds the frames that collect honeycombs) on the wagon. The super went down fast, the frames came up and bees went everywhere. “It was just a big ol’ mess,” Nancy remembers with a laugh. “We’ve had our share of stings.”

Two years later, a fellow beekeeper from the Boone Regional club retired and gave the Giofres several more hives and a barn full of equipment, bringing their numbers up to around 15 or 20 hives. Then, in 2013, the owners of Walk-About Acres in Columbia, who produced honey ice cream for the Missouri Beekeepers’ Association booth at the state fair, also retired. Nancy and Domenic decided to take the leap, buying the business and building a small ice cream-making facility on their property the following spring. By that August, Giofre Apiaries was up and running at the Missouri State Fair. Soon after, Nancy, a former electrician, switched to beekeeping full-time.

The couple now manages about 75 hives spread across their property, as well as on neighboring lots. “You can’t overpopulate a yard or [the bees] will starve,” Nancy explains. “A bee will travel up to 2 miles in their radius to find food. We just want to make sure they’re in a good habitat.”

In the spring, bee colonies build up inside each hive's brood box. Honey is harvested in the summer, and the fall months are spent preparing the bees for winter. On an average summer day, Nancy heads out to the bee yards in the morning to collect supers of honeycomb. She then returns to the honey room, located next door to the ice cream production facility, to unload the supers and stage them for honey extraction the following day.

Once all the supers are in the shop, Nancy checks their moisture content. If the moisture is too high, she’ll leave them in the shop (which is relatively dry) and wait for the moisture to reduce. Otherwise, honey is extracted from the frames inside the super the next day. Depending on the time of year – if flowers are still blooming, for instance – empty supers are returned to the hives to give the bees a jump-start to collect more honey. To keep things moving in a timely manner, the process usually involves around three to four people.

The Giofres don’t produce enough honey for large-scale distribution. Rather, they’re best known for their honey ice cream – they even refer to themselves as “The Honey Ice Cream People.” Demand has grown so quickly that in April 2017, they doubled the size of their ice-cream facility. Now, Giofre produces around 200 gallons of ice cream a week.

When first developing their ice cream, Nancy and Domenic opted to make theirs with a higher milk-fat content than average ice creams. The ice creams contain 10 percent milk fat (the same amount used in gelato), which gives the product a silky, smooth texture. And, perhaps most importantly, each pint contains four tablespoons of honey. The Giofres don’t rely on an ice-cream base loaded with corn syrup and stabilizers; aside from the sugar in their packaged ice-cream mix, honey is the only added sweetener.

“It tastes [like] the real thing,” Nancy says. “We feel [the honey] gives the ice cream a smooth, creamy texture, along with a delightful flavor for folks who enjoy honey.”

Top-sellers are chocolate, vanilla and salted caramel, and Giofre also produces seasonal flavors including blackberry, lemon, pumpkin, eggnog and peppermint. Local products are incorporated whenever possible, including black walnuts and Missouri pecans from Hammons Products Co. in Stockton and elderberries from River Hills Harvest in Hartsburg. A collaboration with Broadway Brewery in Columbia led to an imperial stout flavor this winter. Giofre also produces honey-infused strawberry and chocolate sorbets.

The ice creams were first sold just down the street at Short Stop, a small convenience market connected to a Conoco gas station. The Giofres started with one ice-cream cooler, but it didn’t take long before they needed to bring in a second. “It was just amazing how quickly it became popular,” says Short Stop co-owner Shelly Bedworth. “It’s pretty unique – the need to have two ice-cream coolers at a convenience store in a rural area.”

Giofre now commands its own display in the center of Short Stop, near the registers. In addition to two bright blue coolers packed with pints of mint-chocolate chip, cinnamon-chestnut, peach and more, the company keeps two shelves stocked with raw honey (including lavender and cinnamon flavors), honey sticks and Nancy’s bee bread, made with bee pollen fermented in raw honey.

Bedworth says the ice cream is an easy sell; if she tells a customer that it’s a local product with honey in it, most people will buy a pint or two to try. It’s common for customers to drive in from out of town to get their hands on the treat: One woman from Jefferson City makes the 40-minute drive frequently to stock up. Recently, two couples passing through Millersburg in an RV bought a bag full of pints to take home.

And the Giofres have expanded their product well beyond Short Stop. The honey ice creams are now available at Hy-Vee, Lucky’s Market and Moser’s Market locations across the state, in addition to Local Harvest Grocery in St. Louis; Green Earth Grocery in Edwardsville, Illinois; Ruby’s Market in Springfield, Missouri; and Farm to You Market in Washington, Missouri. This spring, Giofre Apiaries products will also be more widely available in the Kansas City market; next, the Giofres are eyeing distribution in southern Missouri.

Although Bedworth was Giofre’s first retailer, it was fifth-generation farmer Todd Geisert who helped Nancy and Domenic expand visibility of their product across the state. In addition to selling Geisert Farms brats, pork burgers and baby-back ribs at his Farm to You Market, Geisert features products from a range of other small, local producers. In fact, when comparing sales of the Giofres’ ice cream (including the salted caramel-bacon, which features Geisert’s bacon) to a well-known St. Louis custard he also stocks, he sells about 20 to 1.

“Once people try it, it’s an easy sell,” Geisert says. “It’s a little creamier than other ice creams. I tell people it’s like the old-school ice cream they’re used to – but better.”

Donning matching tie-dye Giofre T-shirts, Nancy and Domenic frequently visit stores across the region to let customers sample the ice creams while they educate them about the environmental issues facing bees. In addition to the Einstein quote, facts are printed on their pints of ice cream – noting, for instance, that it would take about one ounce of honey to fuel a bee’s flight around the world. On these visits, the Giofres also hand out flyers that explain what’s happening to honeybees.

And what’s happening is serious: Over the past decade, bees have been disappearing at an alarming rate worldwide. Between 2007 and 2013, more than 10 million beehives were lost due to colony collapse disorder (CCD). When a colony collapses, the majority of its worker bees inexplicably disappear, leaving behind the queen and plenty of food. The phenomenon often leaves beekeepers scratching their heads – as Domenic says, “It’s basically when a hive is gone and nobody knows why.”

This, of course, has devastating agricultural and economic effects, as honeybees are responsible for pollinating 70 of the 100 crops that provide 90 percent of the world’s food. Another way of looking at it: Bees pollinate one in every three bites of food that humans eat, including everything from apples, berries and grapes to lima beans, onions and cashews.

No one single reason has been proven to cause CCD; a 2015 review attributed the occurrence to a combination of factors, including parasites, pesticides and diet. The most recent U.S. Department of Agriculture report on honeybee health, released in August 2017, found that the number of hives lost to CCD was down 27 percent from the prior year, yet a majority of beekeepers still reported losses due to pesticides, mites and other issues. In Millersburg, Nancy and Domenic say they can’t tell for sure if they’ve experienced CCD, but they’ve lost a number of hives to varroa mites and hive beetles in particular.

Luckily, there are ways consumers can help combat these causes, including planting wildflowers like lavender, poppies and daisies to provide bees with more food. “We try to educate the public about those issues when we have the opportunity,” Nancy says. “Let a flower grow; be careful what you put on your lawn. Not all chemicals are safe for animals – or us.”

Above all, Nancy says she’d like people to become educated about sustainable landscaping practices that incorporate more wildflowers, clover and native plants. In the future, in addition to teaching consumers about easy ways to help protect the bees, she hopes to be able to put a portion of Giofre’s sales toward honeybee research.

After all, she says, the bees are the backbone of their business – and the Giofres won’t ever forget it.

“Nancy and Domenic are both hard workers, and they like to be good stewards of the bees themselves,” Bedsworth says. “They didn’t get into this just to make money – they really do genuinely care about the bees and the environment.”

At Windsor Street Montessori School in Columbia, Missouri, chef Gaby Weir Vera is educating the next generation of eaters