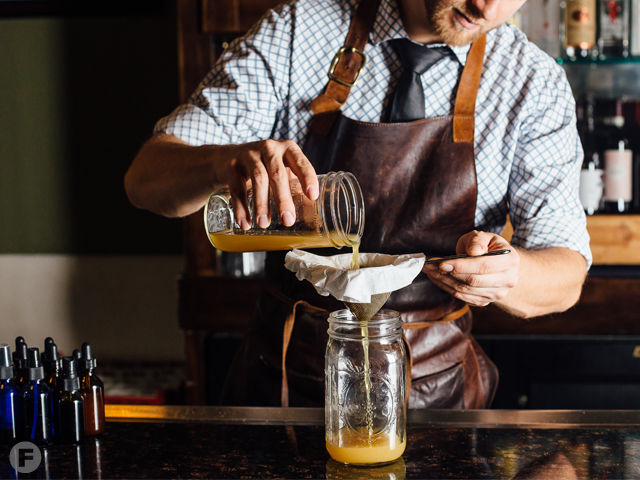 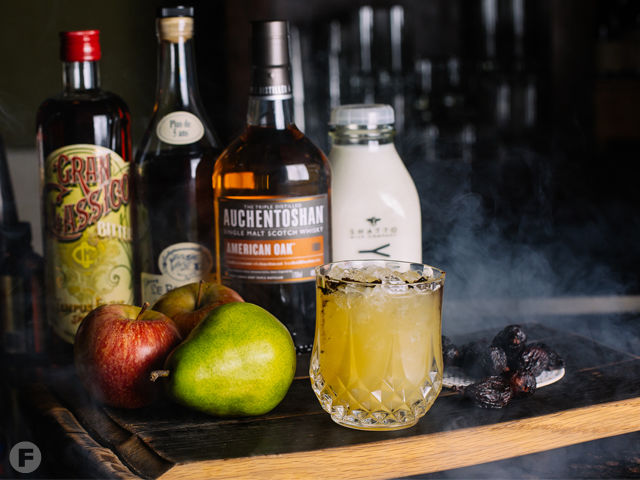 For his Lowland Jack, Brock Schulte first macerates pears with whiskey and then milk washes the batch with whole milk.

For his Lowland Jack, Brock Schulte first macerates pears with whiskey and then milk washes the batch with whole milk.

The technique of fat washing might sound unappealing, but the goal is to pack cocktails with richer texture and flavor.

At The Rieger, bar manager Brock Schulte milk-washes many of his cocktails – but that doesn’t mean there’s a dairy flavor in your drink. “You don’t ever taste milk,” he says. Rather, you get its texture. For Schulte, milk washing is a technique to clarify and preserve. He’s been using it in drinks for the past two-and-a-half years, and the cocktails have been pretty popular. For his Lowland Jack, Schulte first macerates pears with whiskey. To clarify the spirit of any tannic flavors from the fruit, he milk washes the batch with whole milk and strains it through a coffee filter. “What I really enjoy about the technique is the texture I get,” Schulte says. “I still have casein [the protein found in milk] in there, but when I shake it in the drink, it acts like an egg white. I get this nice, frothy, full-bodied drink that’s very chug-able.” Schulte has also used browned butter fat washes with bourbon and rum. He thinks a fat-washed cocktail has a place on any drink menu. “We will always have one at any restaurant or bar I’m at,” he says. “It allows you to pack a lot of flavor into something and still make a cocktail really quickly.”

Beverage director Ben Bauer has regularly featured a fat-washed cocktail at The Libertine in Clayton, Missouri, for the past year and a half. Last fall he served the Preakness, featuring duck fat-washed Benedictine, rye whiskey, Italian vermouth and Angostura bitters. “Benedictine already [has] a fairly silky texture,” Bauer says. “This just amplifies that a lot and adds a ton of flavor to the cocktail.” In general, he says the process of fat washing is easier than it seems. Home mixologists can heat their chosen fat in a saucepan and infuse it with any other flavoring agent – such as an orange peel – and mix it with a spirit. Store the mixture in an airtight container for four hours until cool, and then leave it in the freezer overnight before straining it. Bauer uses cheesecloth for straining but says a coffee filter works well, too. He says the process makes the cocktail silky-smooth, yet still clean and not oily. “That’s a big part of it for me,” he says. “The texture in cocktails is something that can kind of fall by the wayside, but it’s super important.”

There’s only about 50 seats inside Flyover in Columbia, Missouri, but since the restaurant and bar debuted this summer, there’s usually a line out the door before it opens for service. Beverage director and co-owner Dan Dethrow leads the bar program, and depending on his mood that day you might find a fat-washed Sazerac on the menu. Dethrow – whose father, Jerry Dethrow, is the former owner of local favorite Booches – says the restaurant goes through a fair amount of duck breasts, so he has plenty of duck fat on hand for fat washing. He melts a tablespoon of duck fat into a pan and combines it with a liter or two of rye whiskey. After the mixture has cooled to room temperature, he sticks it in the freezer before he leaves for the night. Dethrow add that customers are either surprised or hesitant when they hear or see the words “fat washed.” “Overall, once people try it, they really like it – especially whiskey drinkers,” he says. “It adds a richness that’s unique; it almost adds more of the smoke flavor.” Dethrow says Flyover will continue to experiment with fat-washed cocktails because it connects the kitchen and bar operations and leads to less food waste. “It’s fun to see the blurring of the line between what’s culinary and what’s mixology,” he says.

Bartenders infuse their choice of fat – oil, milk, animal fat – with a spirit and freeze the concoction overnight. The fat solidifies on top of the liquid and is scraped off, leaving only the flavor and texture of the fat. Once the spirit is strained with a sieve or a similar filter, it’s smooth and ready to add to a tasty cocktail.