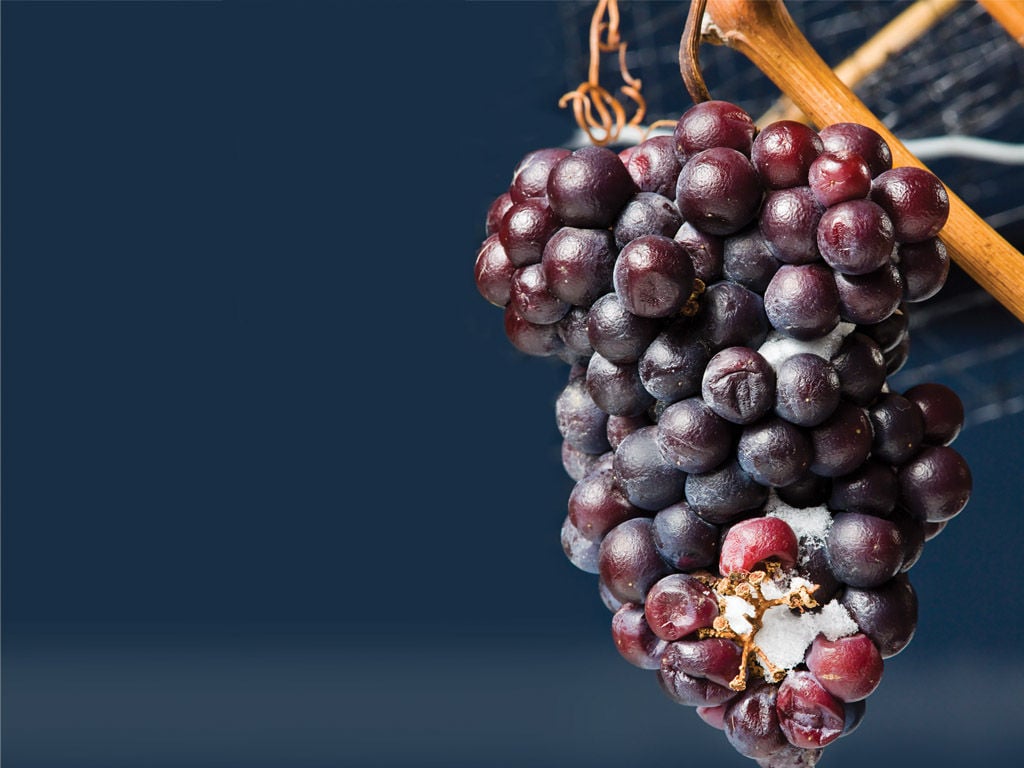 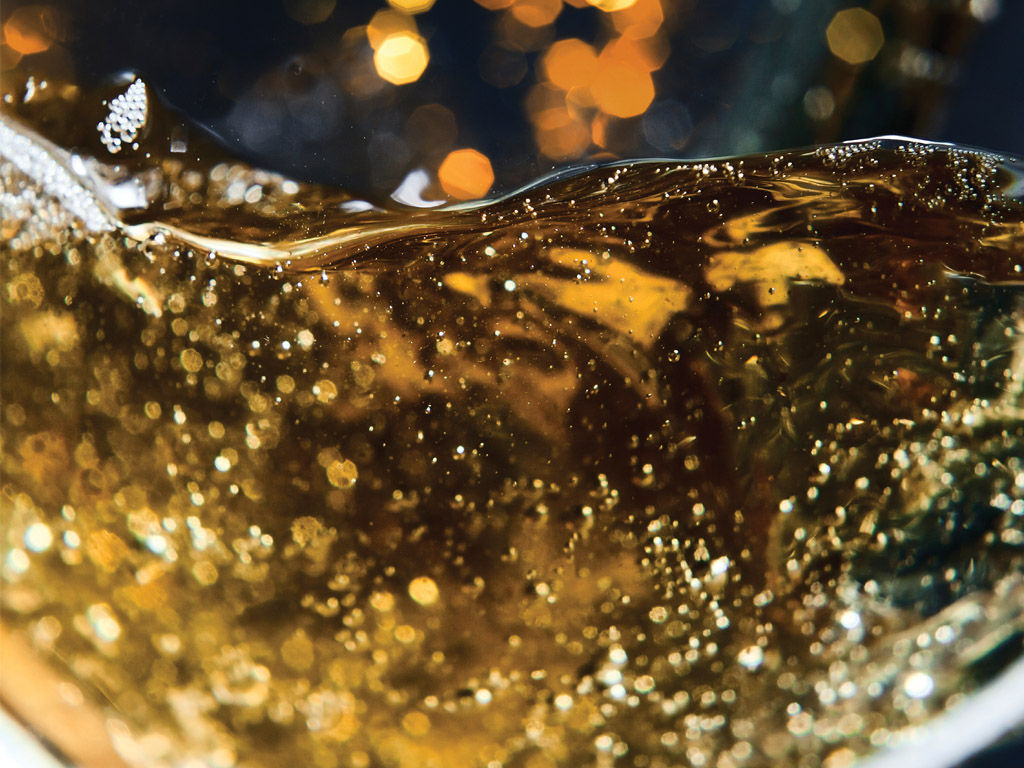 Winemakers risk a lot to produce ice wine, but the payoff is sweet.

Winemakers risk a lot to produce ice wine, but the payoff is sweet.

By late fall, the craze of harvest season has passed for most regional winemakers, but there are a select few who dare to wait longer than the rest for just the right moment. It’s a moment that leads to rich and luscious, intensely sweet and silky late-harvest wines and ice wines.

Both are made by leaving grapes on the vine beyond regular harvest so they’re extremely ripe and have built up more natural sugar. By doing so, fruit is exposed to risks such as rot, mildew and damage from birds and insects, but the reward of a successful late harvest is rich wine bursting with fruit flavor. Usually made in relatively small batches, ice wines and late-harvest wines are rare and limited, and represent the patience and delicate care that go into each bottle.

Grapes used to make late-harvest wines hang on the vine about a month past the typical harvest season – which usually begins in late August and runs through mid-October in Missouri and southern Illinois – but do not freeze. Grape growers rely on the accumulation of sugar through natural dehydration.

In 2013, the winemaking and vineyard teams at Stone Hill Winery in Hermann, Missouri, decided Oct. 11 was the right day to pick Vignoles grapes for its late-harvest wine.

In some cases, though it’s not common in all states in the Midwest, the presence of Botrytis cinerea bunch rot also plays a role in producing late-harvest wine. This is a species of fungal infection that – under the right conditions – can be a good thing. If you get the infection and the weather stays dry, the grapes get what’s called noble rot. This aids dehydration and concentrates the sugars and flavors of the juice. If the infection happens under rainy conditions, the fruit is lost.

“In the case of our late-harvest, that is not the primary driving force behind the increased concentration of sugar because our climate is not as conducive to classic noble rot as it might be in some areas,” says Stone Hill senior winemaker Dave Johnson. “But, it often plays a secondary role.”

According to Johnson, noble rot plays a large role in producing the greatest and most well-known late-harvest wines: French Sauternes.

The team at Stone Hill uses Vignoles grapes because of their natural tendency in Missouri to dehydrate and have higher sugar content. The winery depends on the warm climate and long growing season to achieve the sugar levels needed for late-harvest wine. “We have picked it when it looked like we were harvesting raisins,” Johnson says. “It made a spectacular late-harvest wine.”

When harvesting grapes in the vineyard, pickers must sort the clusters much more carefully to remove bad fruit, as some are destroyed by birds and insects, and loss is common. “One thing that always happens is you might leave 10 tons of grapes, but then there are 4 tons that you could use,” Johnson says.

After grapes are harvested at Stone Hill, they’re sent through a machine that removes stems and pops open the skins before they go into the press. Pressing grapes for late-harvest wine takes much longer than when making the winery’s regular Vignoles. “Think about how much harder it would be to press the juice out of a raisin than a grape,” Johnson says.

The pressed juice is extremely sweet, almost like nectar. Winemakers at Stone Hill ferment it in cool conditions to retain as much of its distinct, ripe fruit character as possible. “It’s not as easy for the yeast to ferment,” Johnson says. “It’s not as friendly of an environment. It’s a more difficult fermentation and is much slower.”

The winery’s regular Vignoles can take about a week or two to go through fermentation, whereas late-harvest Vignoles can take twice as long. The end result has a light golden color with a floral bouquet that hits the palate with tropical fruit, peach and apricot and finishes with caramelized sugar and honey. It pairs especially well with figs, goat cheese or desserts made with apples. In the 2014 Missouri Wine Competition, the 2013 vintage won Best of Class in the late harvest/ice wine category, and the 2012 vintage won gold at this year’s competition.

With all of the early rain this year, Stone Hill won’t be producing a 2015 late-harvest wine. Johnson says grapes become vulnerable once they’re ripe, so if you have the wrong weather, you end up with rotten fruit.

Late-harvest wines can be enjoyed immediately while they are young and fruity or aged to achieve some caramelized flavors; Johnson says it’s all up to personal preference.

At Grapes of Held Winery & Vineyard in Fairdealing, Missouri, just southwest of Poplar Bluff, owner-winemaker J. Fred Held is using a nontraditional grape to make late-harvest wine: the red French-American hybrid Chambourcin. Held has always used the varietal to produce late-harvest wine, as opposed to more popular white grapes such as Vignoles and Vidal Blanc. “I decided I wanted to try something a little different and see how it worked,” he says.

Held lets his Chambourcin hang on the vine past the first frost, although his 2010 vintage endured about four frosts before harvest. Sometimes this happens in October; other years, he’s waited until November – compared to when he harvests regular Chambourcin grapes in late September or early October.

He says the biggest difference when using a red varietal for late-harvest wine is beginning fermentation before grapes are pressed. After they’re crushed and destemmed, Held pitches the yeast with the skins still on. The resulting juice is very thick, like syrup, from the natural sugar, and the skin contact adds tannin and gives the wine its deep red color. Held stops fermentation early to maintain the residual sugar and then puts everything into the press.

The finished product is a sweet, complex take on Chambourcin, a varietal typically fermented to be a dry-style wine. “It’s a nice grape to work with,” Held says. “It has a really nice port-like taste to it, but it’s not fortified.”

Held doesn’t plan to make a late-harvest wine in 2015 due to all the rain. His 2010 vintage is currently available, and he’s preparing to release the 2011. Wine isn’t distributed outside of the tasting room, so you’ll have to visit Grapes of Held to try it, or you can call the winery to have a bottle shipped almost anywhere in the U.S. Although Held doesn’t produce a high volume of late-harvest wine, he says it’s been a great seller.

The tradition of making ice wine is deeply rooted in Germany and applies a different approach than late-harvest wine to concentrate sugar. Instead of depending on natural dehydration, grapes are left on the vine to freeze for an extended period of time. By doing so, the water inside freezes – while sugar and other solids do not – leaving behind an extremely sweet juice.

“Freezing is the way of concentrating the goodies,” Johnson says.

The varietal is just as important as the process. At Stone Hill, Vidal Blanc grapes are used to make its award-winning ice wine, as the varietal is more resistant to rot and its thick skin is less likely to crack. Again, it’s all about harvesting grapes at the right moment.

“This ice wine is quite an adventure because the question becomes when to pick the grapes and when not to pick them,” Johnson says. “We’re all on the phone with each other trying to figure out if it’s going to be cold enough.”

On Dec. 9, 2013, nearly three months after harvest season, the winery made the call. It had been around 16°F for several days, and winemakers knew they could get the grapes picked and to the press without thawing. While late-harvest grapes take a long time to press, it’s an even slower process when they are frozen. Winemakers are trying to retrieve little bits of unfrozen juice among ice. “It’s like handling a bunch of marbles,” Johnson says.

The cycle takes around 24 hours of continuous pressing. Eventually, Johnson and his team will see a little bit of thawing, which means the sugar content could decrease. “That’s when you go, ‘OK, we’re done pressing,’” he says.

And with ice wine, wineries lose even more during production. Johnson says his team would normally get about 180 gallons of juice per ton. With ice wine, they only get around 100 gallons.

So why make it?

“Because it’s fun and it makes a fabulous product when you can do it,” Johnson says.

Stone Hill’s 2013 Vidal Blanc ice wine was the winery’s first ever, and Johnson is quick to acknowledge winemaker Shaun Turnbull’s role in producing it. At the time, Turnbull had started to take on a larger role at the winery and was a key player in producing the vintage. “We all collaborated, but this was his baby,” Johnson says.

The ice wine is sweet, with a bouquet of tropical fruit and a bit of citrus. It has rich flavors of pineapple and apricot with a touch of vanilla midpalate. The mouthfeel is full and well-rounded with a long, creamy finish. A slice of pecan pie or strawberry shortcake would pair nicely with the wine, which won Best of Class at the 2015 Missouri Wine Competition and gold in 2014.

Johnson says this year’s Vidal Blanc looked promising when it was picked in late September, despite all the rain that prevented the winery from making its late-harvest wine. The vineyard crew netted a block of grapes and is hoping to produce ice wine in 2015. “It’s a gamble,” Johnson says.

Winemaker Tony Kooyumjian, owner of Augusta and Montelle wineries in Augusta, Missouri, is a third-generation vineyard owner and grape grower. He takes a different approach to producing wines with highly concentrated sugars and flavors.

Kooyumjian lets grapes hang on the vine past regular harvest season and looks for the concentrated sugars that accumulate through natural dehydration, much like winemakers usually do to produce late-harvest wine. At both wineries, teams monitor the grapes daily, waiting for just the right moment (the wineries primarily use Vidal Blanc, as well as some Chardonel and Muscat grapes). From there, Kooyumjian veers onto a different path by freezing grapes after they’re picked, once he thinks they’ve ripened as much as they can. After grapes are frozen, they’re left alone to chill for at least a week.

This usually happens in November, before Thanksgiving, but every year is different. Kooyumjian says the advantage to producing wine this way is that he doesn’t have as much loss as he would if the grapes froze on the vine, keeping the bottle price lower. “We’re able to do that because we aren’t exposing ourselves to the risks and restrictions,” he says.

Late-harvest wines and ice wines are often thought of as being higher in alcohol content than other styles of wine, but Kooyumjian says that’s not always the case.

“You don’t want a lot of alcohol in ice wine because it doesn’t balance well with the sugar,” Kooyumjian says. “We usually aim for 10 percent.”

Winemakers like Johnson, Held and Kooyumjian risk a lot to produce late-harvest wines and ice wines. They could pick and press grapes during the regular harvest season instead of putting in the extra effort, instead of waiting for the precise, fleeting day and time when grapes are exceedingly ripe for the picking. For keeping grapes on the vine a little longer and undertaking an extremely time-consuming production process, they are rewarded with sweet wines full of complex fruit character.

Each vintage lends itself to different food pairings, but in general, these wines complement equally sweet or rich dishes, such as foie gras, cheese, honey-glazed pork and chicken, or most any after-dinner treat. With just one sip, you’ll understand why winemakers put so much time and delicate care into making limited batches of these intensely sweet and special wines.