Skip to main content
You have permission to edit this article.
Edit
The Magazine
St. Louis
Kansas City
Springfield
Columbia
Other Cities
Recipes
Events
Videos
Promotions
Newsletters
Share This
1 of 11 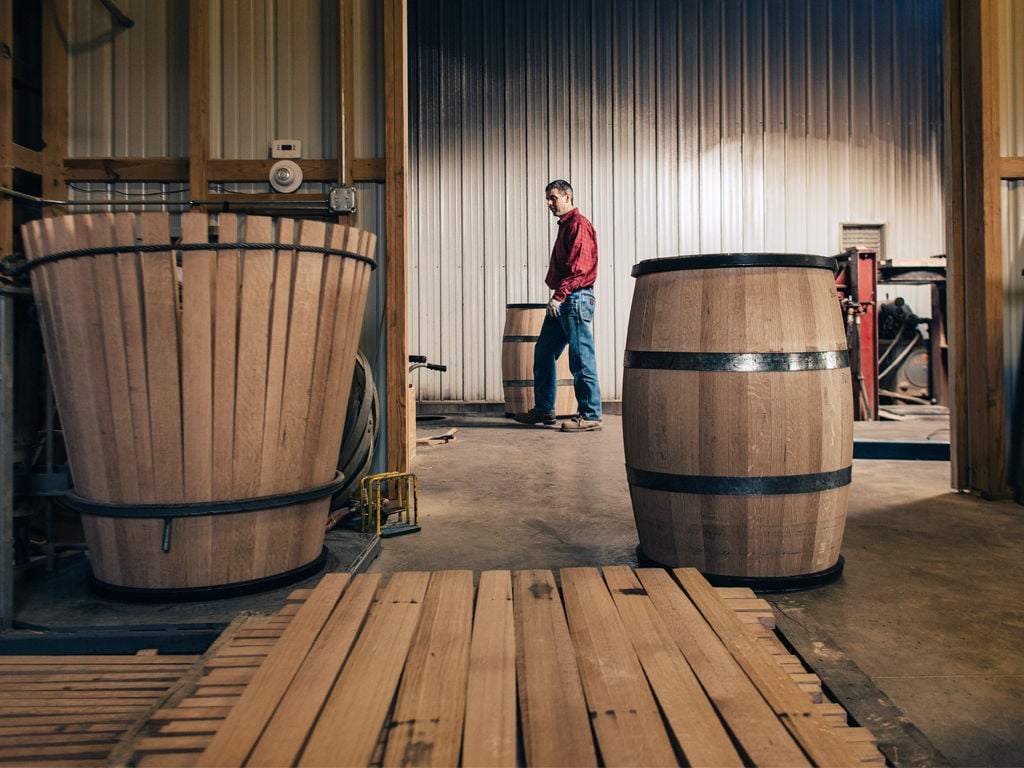 Hoffmeister estimates his cooperage makes fewer than 500 barrels annually, compared to Missouri competitors who make hundreds and even thousands daily. 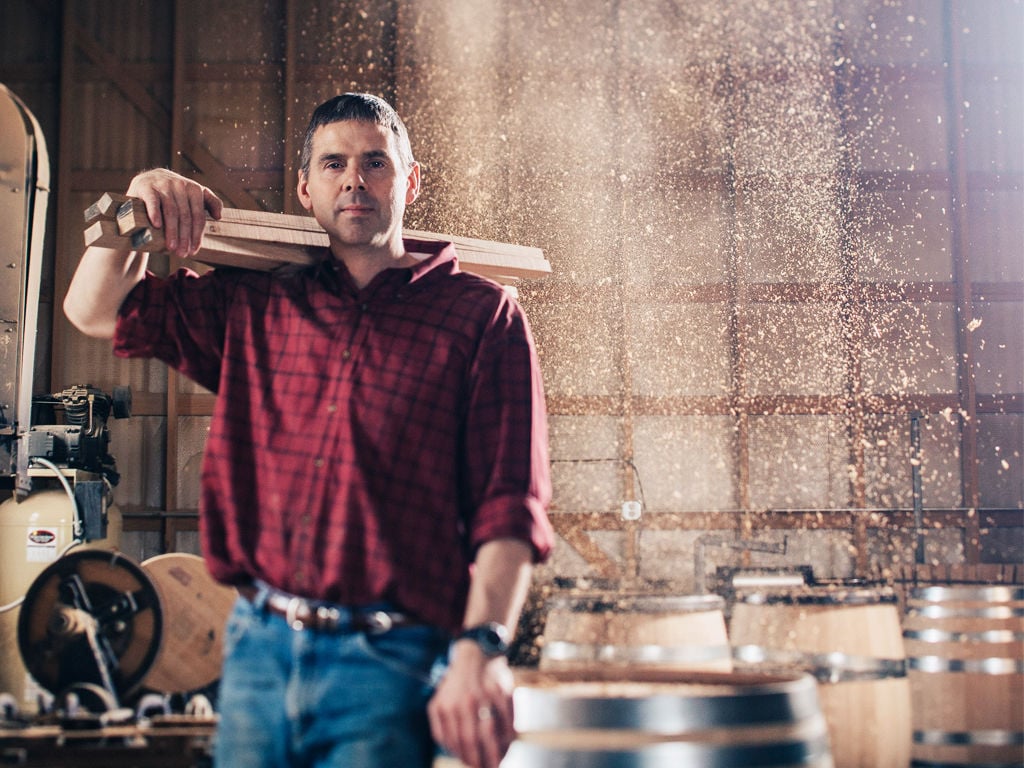 Joe Hoffmeister has chosen to celebrate and elevate wine in a way different from that of his parents and sister, but with no less integrity and enthusiasm. 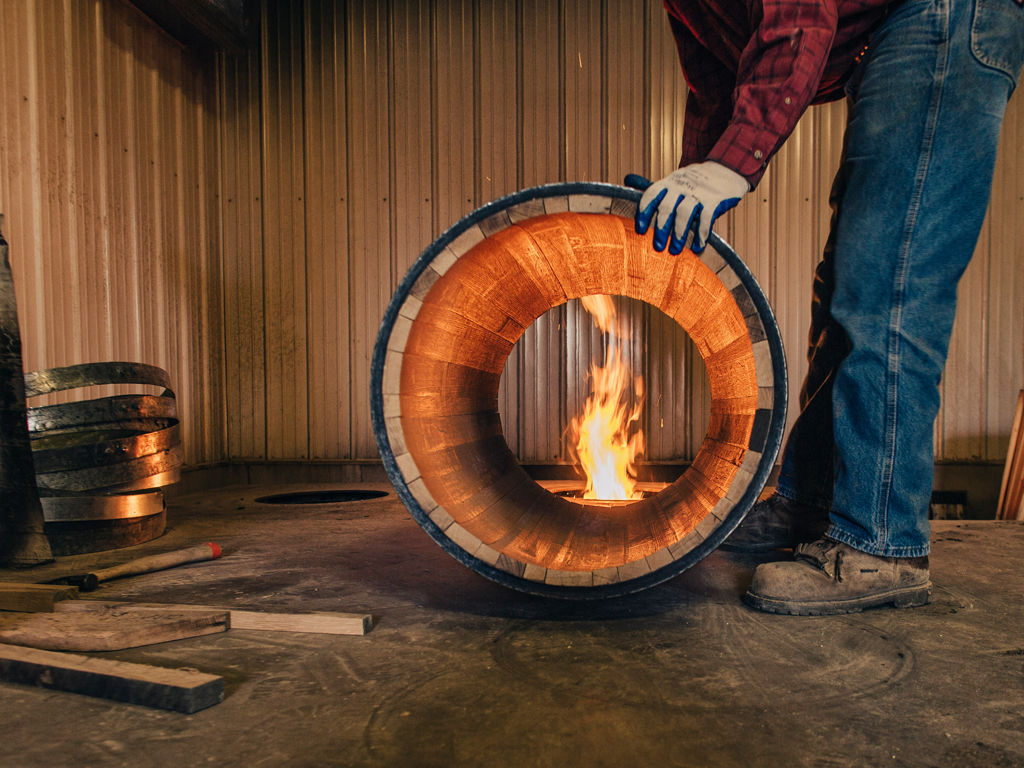 A small but steady fire heats the barrel for an extended time while intermittently being sprayed with water to allow the staves to become pliable. 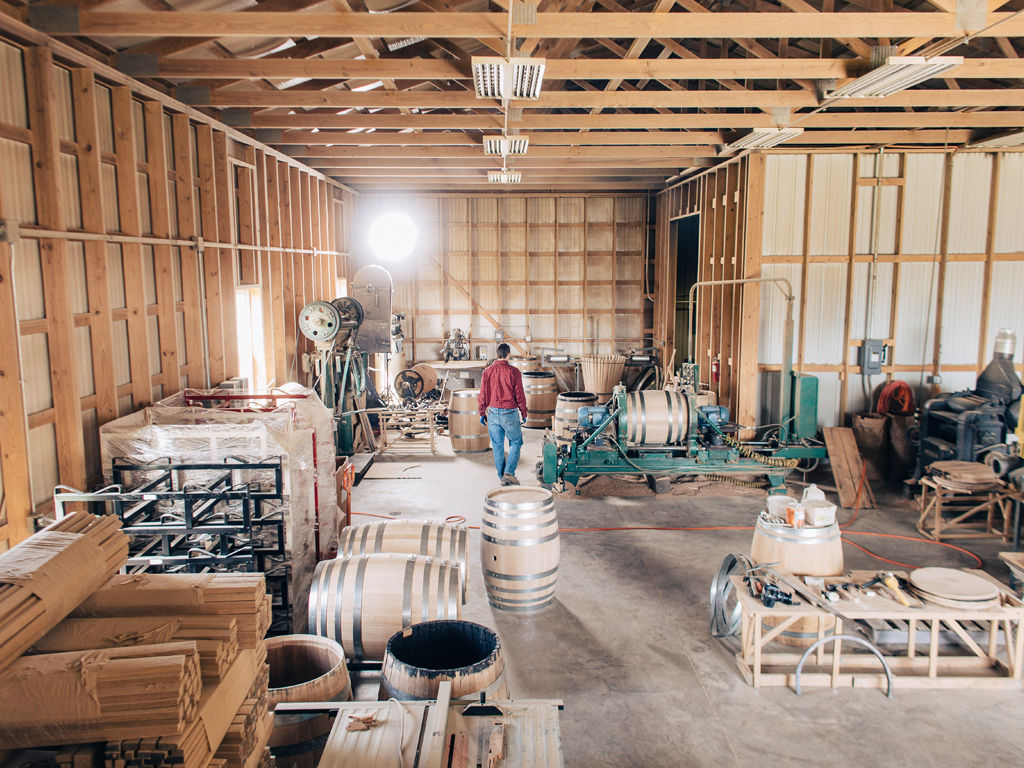 The small but growing artisanal cooperage is located in northern Ste. Genevieve County. 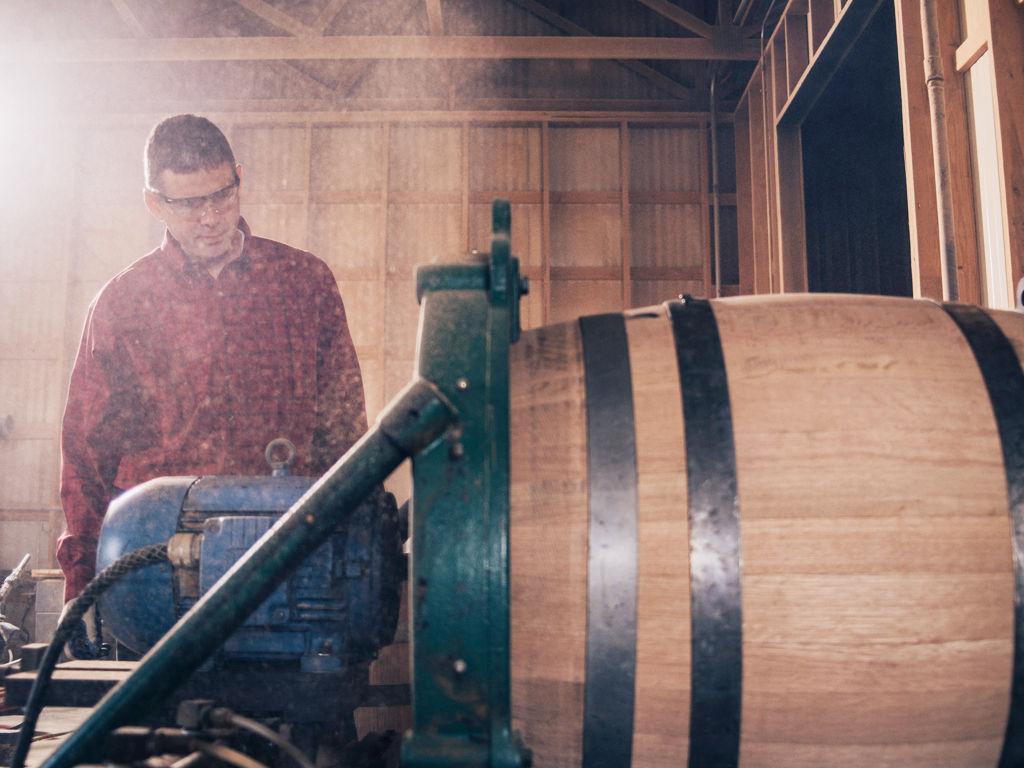 An intensive apprenticeship in cooperage changed led to the launch of Hoffmeister Barrelworks. 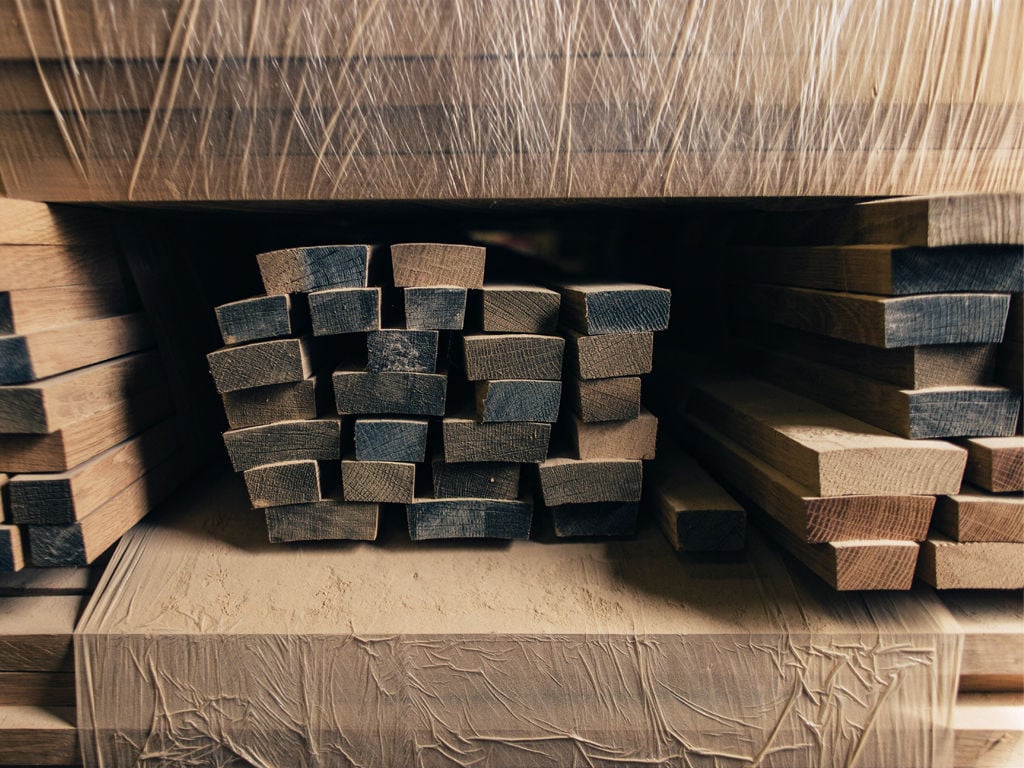 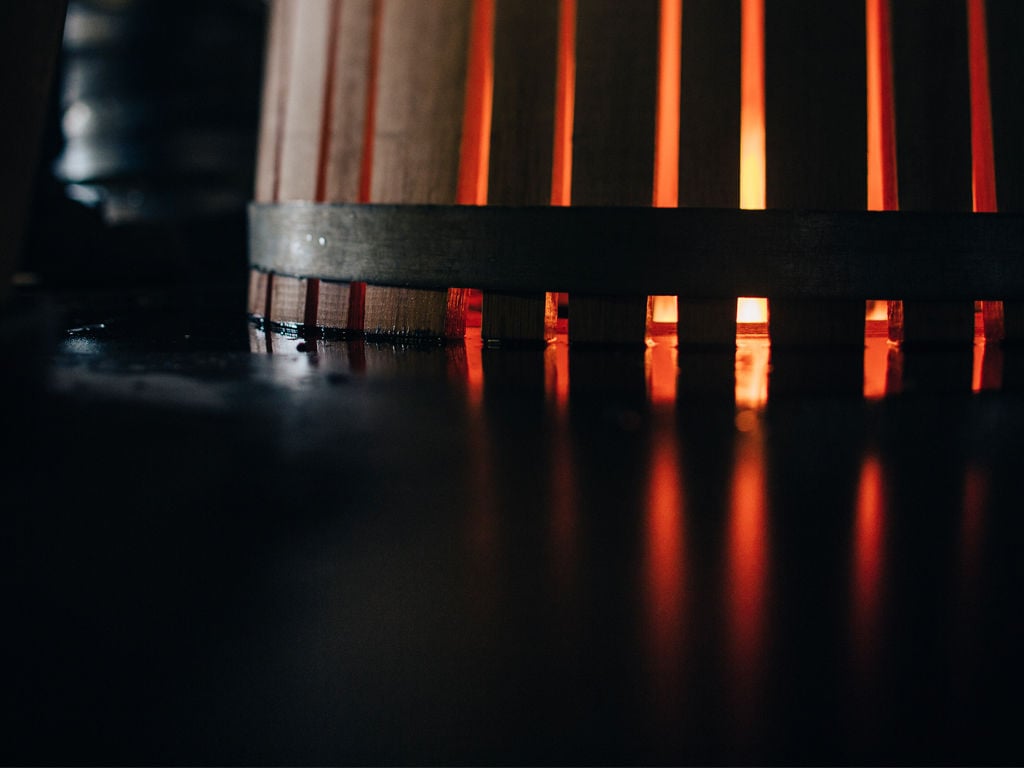 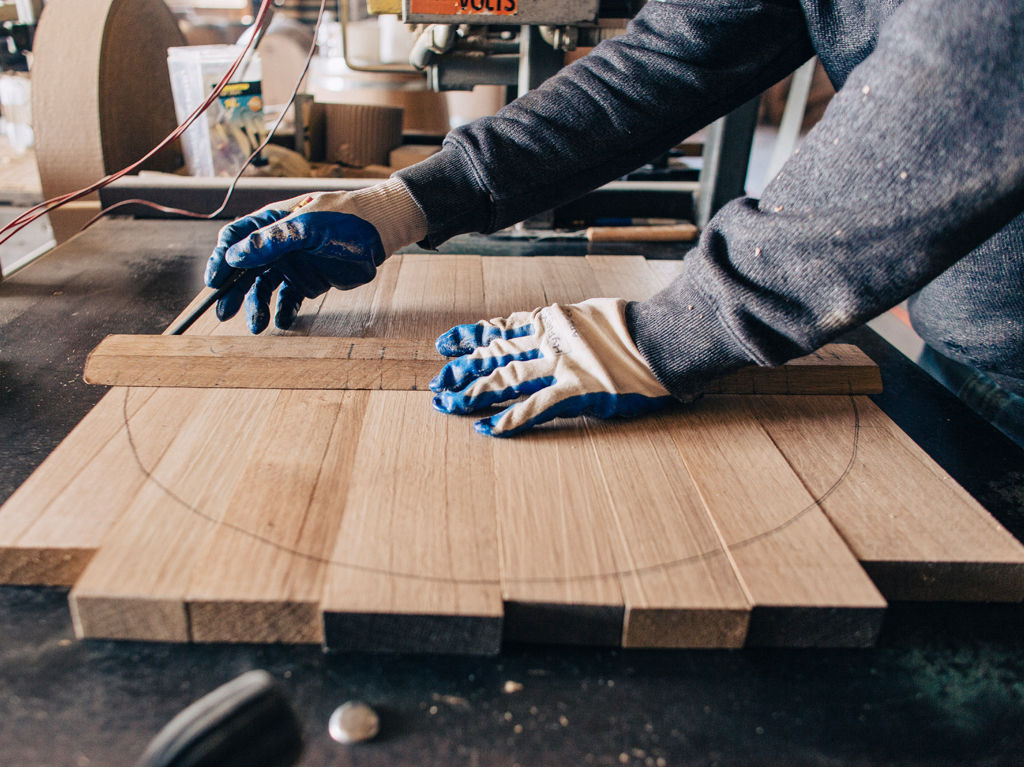 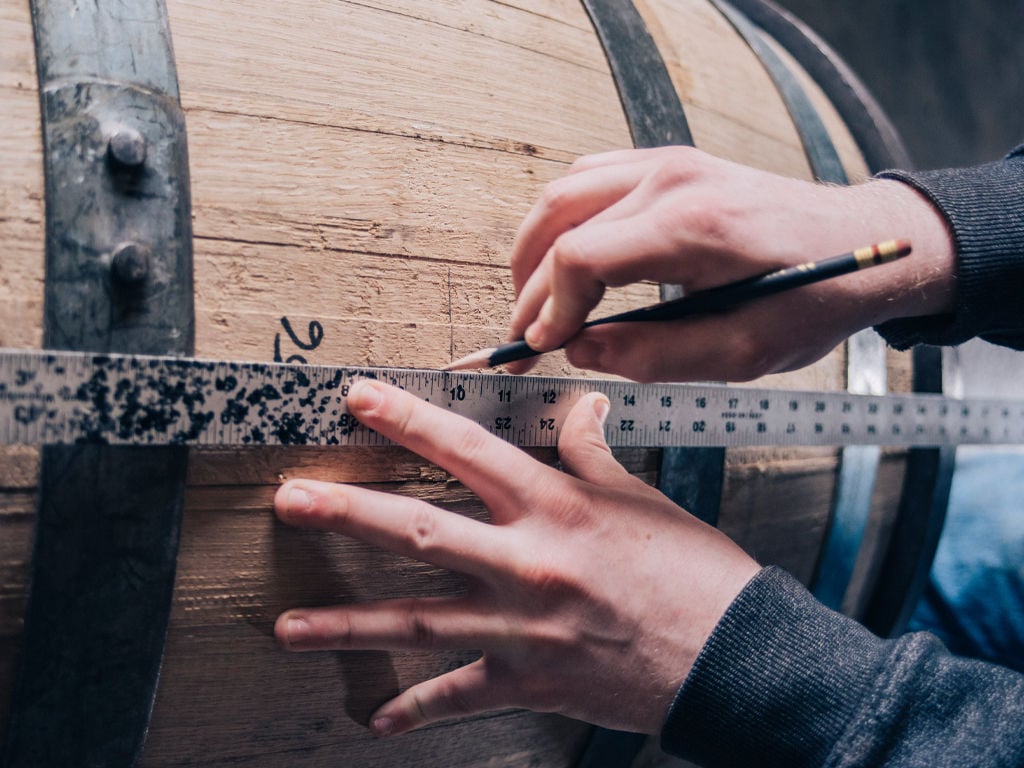 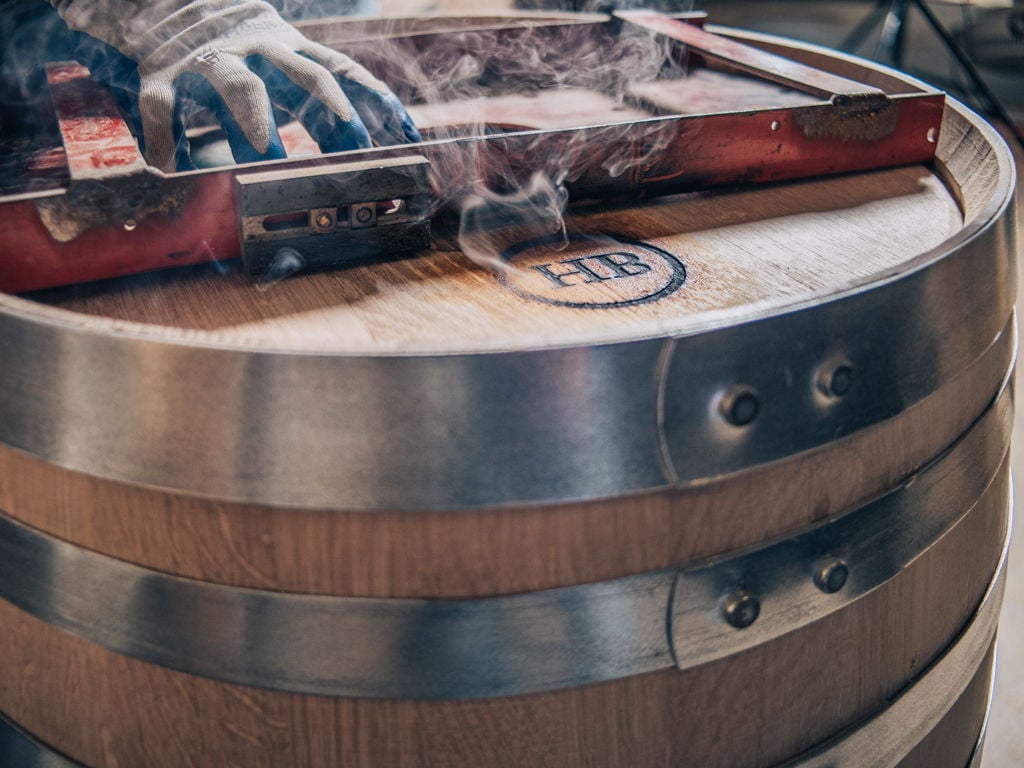 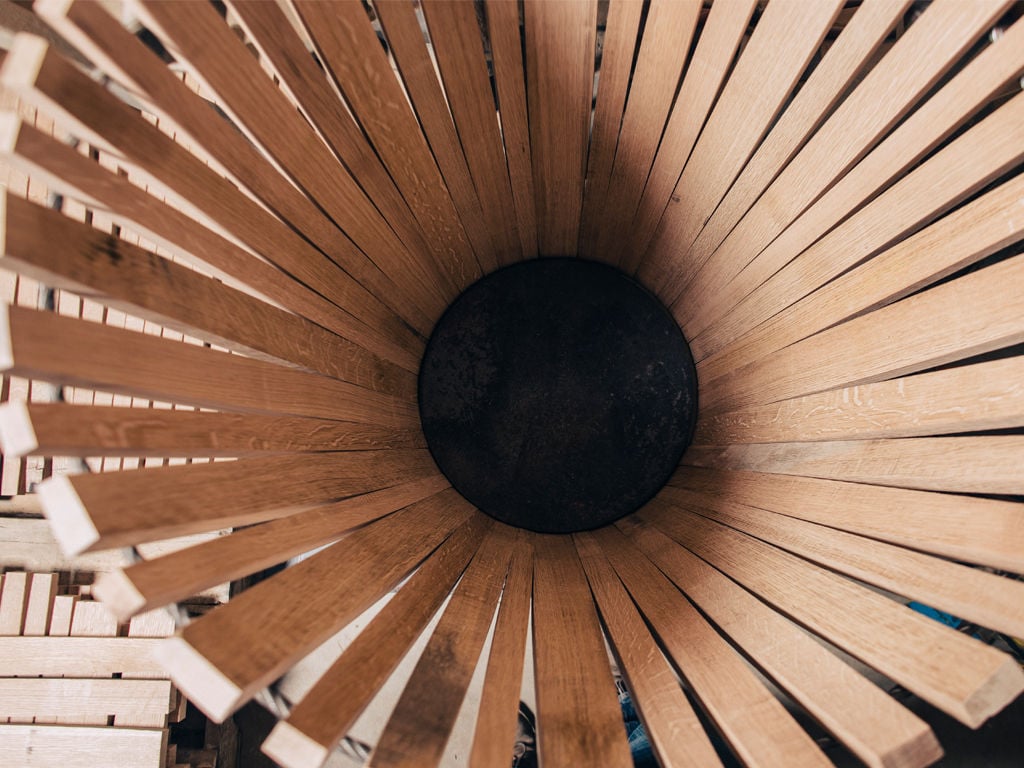 Although symmetrical, the shape of a given barrel is not a cylinder, with curvature tapering each end.

Hoffmeister estimates his cooperage makes fewer than 500 barrels annually, compared to Missouri competitors who make hundreds and even thousands daily.

Joe Hoffmeister has chosen to celebrate and elevate wine in a way different from that of his parents and sister, but with no less integrity and enthusiasm.

A small but steady fire heats the barrel for an extended time while intermittently being sprayed with water to allow the staves to become pliable.

The small but growing artisanal cooperage is located in northern Ste. Genevieve County.

An intensive apprenticeship in cooperage changed led to the launch of Hoffmeister Barrelworks.

Although symmetrical, the shape of a given barrel is not a cylinder, with curvature tapering each end.

One late-winter afternoon, beneath charcoal skies, Joe Hoffmeister bounds from the office of Hoffmeister Barrelworks with a spring in his step. He does so despite having just driven to and from a trade show in Pennsylvania – a transit of 1,800 miles, give or take.

At the moment, Hoffmeister estimates his cooperage makes fewer than 500 barrels annually, compared to Missouri competitors who make hundreds and even thousands daily. “I have about 100 customers across the U.S. and have sold to a big chunk of the wineries in Missouri,” he says, adding that the cooperage’s artisanal quality has earned business from wineries in more than 20 other states, among them California, Texas, Virginia and Washington. Although most of his barrels go to winemakers, a number of distilleries use them, as well.

A lanky 50-year-old chap whose voice lilts with a chuckle and who sports a faded Cardinals T-shirt on the day of my visit, Hoffmeister hails from perhaps the longest-tenured dynasty in Ste. Genevieve’s burgeoning wine country.

More specifically, his father and late mother, Linus and Hope Hoffmeister, opened the Sainte Genevieve Winery tasting room a block northeast of the historic municipality’s town square in 1983. (Toward the end of my visit to the cooperage, Hoffmeister’s father also visited, in the process of overseeing the delivery of gravel for the driveway leading to the vineyard, which is next door.)

After earning a degree in enology from California State University, Fresno, Hoffmeister’s sister, Elaine Hoffmeister Mooney, joined their father in shepherding the winery as its winemaker.

“The bulk of the winemaking for Sainte Genevieve Winery occurs about 100 yards from my shop in the adjacent building,” Hoffmeister says. “That said, we are completely separate entities – different addresses, different leadership and so forth. They make wine; I make barrels. It’s fun to be located so close to family, but they’re busy and I’m busy, so the times we spend together are generally at the beginning of the day or the end of the day.”

As a cooper, not a vintner, he has chosen to celebrate and elevate wine in a way different from that of his parents and sister, but with no less integrity and enthusiasm. Dating as far back as the 1920s, Hoffmeister estimates, the cooperage’s hulking equipment looks like B-movie sci-fi set schlock from two decades later, before everything turned plastic.

“It’s definitely what I refer to as ‘vintage equipment,’” he says. “It’s old. It’s not high-speed. But it’s reliable. It’s super-heavy, and once you’ve got it set up to do what you need it to do, it will run over and over and over again.”

Noting that the cooperage’s equipment came “from a number of different sources,” Hoffmeister cites as “one of the harder parts of getting into the business” the difficulty of finding such equipment in the absence of a handy Cooperages “R” Us.

“So you seek it out,” he says. “A couple pieces I’ve had to build because I couldn’t find an existing one. But most of it was originally manufactured strictly for the barrel industry – it doesn’t have a dual purpose.”

Hoffmeister then proceeds to give me a quick tour of the shop – which employs a small, seasonally variable staff – and a brief, informal lecture on the cooper’s art.

Although symmetrical, the shape of a given barrel is not a cylinder, with curvature tapering each end. Thus, the inch-wide six to eight steel hoops that collectively hold the barrel together differ in diameter. The steel unspools from the end of a monolithic machine at the front of Hoffmeister’s shop into a carriage that advances it a set length. The machine then cuts the steel and punches it twice at each end. After being rolled together end to end, the piece then gets two rivets applied through the pairs of holes, and another machine compresses the rivets to form a barrel hoop.

At the center of his shop, Hoffmeister stops before another pair of machines. He groups 10 or so shorter pieces of planed oak intended for a barrel end, or “head,” and uses a makeshift round template to ensure the group covers enough area. The first machine drills each of the pieces on its two sides, and Hoffmeister then hammers dowel pins into the holes.

“There are a number of ways to make heads,” Hoffmeister notes regarding his use of such pins. “The big cooperages employ tongue-and-groove, steel pins or glue to hold the boards together. I use dowels because it is a very traditional methodology. It is a very strong and durable method to make heads, and my barrels should last decades, given the construction techniques I use.”

Once a head has been compressed into a single (mostly square) unit, it’s locked into position on another machine. It then rotates 360 degrees around a blade that cuts the head into a perfect circle, with a “double-beveled” edge around the circumference. This ensures a perfectly tight seal when it’s fit onto the barrel.

At the back of the shop, Hoffmeister uses yet another specialized machine involving two heavy black steel rings; one is roughly 2 feet in diameter, and the other is slightly larger and set higher. He places staves – the oak boards used for the body of a barrel – vertically around the inside circumference of the rings, the whole of which is then squeezed together, yielding a roughly conical shape.

This construct is then placed over one of two fire pits. A small but steady fire heats the barrel for an extended time while intermittently being sprayed with water. This allows the staves to become pliable and they are then pulled and bent into a barrel shape by a cable-and-winch system.

The proto-barrel then returns to the fire pit for toasting over gradually increasing heat, which drives the natural sugars and vanillins to the surface.

His distillery customers often ask for charred, which is way past a heavy toast – not in the same category, even. “To char, I build a fire so hot the inside of the barrel literally catches on fire,” Hoffmeister says.

Toasting also involves other factors like humidity, the staves’ moisture content and the duration of Hoffmeister’s fires, which are impossible to govern down to a set degree. Variability (albeit carefully overseen variability) very much defines the craftsmanship here.

Après toasting, another monolithic-machine visit ensues. The barrel goes horizontally into said machine, which rotates it 360 degrees, cutting deep grooves into each end to receive the heads.

From there, Hoffmeister admits the heads in the grooves, and then pressure testing and sanding – using both a 5-inch-wide belt sander and hand-sanding – follow, before placement and tightening of the final hoops. At some point during these steps, Hoffmeister brands the logo and the toast level onto the barrel.

The assembled barrel then visits one final station in the shop for stretch-wrapping to keep the moisture content of the wood approximately the same as it is at the time of the barrel’s manufacture, preventing or lessening subsequent drying and shrinking.

Hoffmeister notes that his cooperage deals in barrels made both from American oak and French oak, the distinctions between which he succinctly defines for beginners.

“The French oak, it bends a little differently, and the aromas that you get off of the wood when you toast it are different,” Hoffmeister says. “And from a density perspective, it’s a lighter barrel. When you move it around the shop, you can definitely tell the difference – it weighs 10 to 15 pounds less than an American oak barrel. And the way they cut and process the wood are different.”

Hoffmeister enjoys wine, noting a preference for barrel-aged dry reds. He also has enjoyed the fruit of the vine from the fruits of his own labors. “I have tried wine from my barrels,” Hoffmeister says. “The wine has been extremely good – which in my opinion means the winemaker knew what [he or she was] doing and my barrels complemented [his or her] expertise,” he says. “Barrels are but a piece, an important piece, but still just a piece of the puzzle when crafting great wine.”

“It’s a good business – I like it,” Hoffmeister says of being an artisanal cooper, referring offhand to his prior stint behind a desk.

More specifically, after earning an engineering degree from the University of Missouri-Rolla (now Missouri University of Science and Technology) in 1989 and an MBA from Washington University in St. Louis a decade later, he served a five-year stint with a consulting engineering firm in Kansas City and then worked for Anheuser-Busch in St. Louis for 17 years, first in the engineering department, then in logistics and business development.

An intensive apprenticeship in cooperage changed all of that and led to the launch of Hoffmeister Barrelworks.

All in the Family

A professional winemaker reflects on oaken distinctions in cooperage.

The restaurant industry is in crisis. How can we not only save it – but make it stronger?