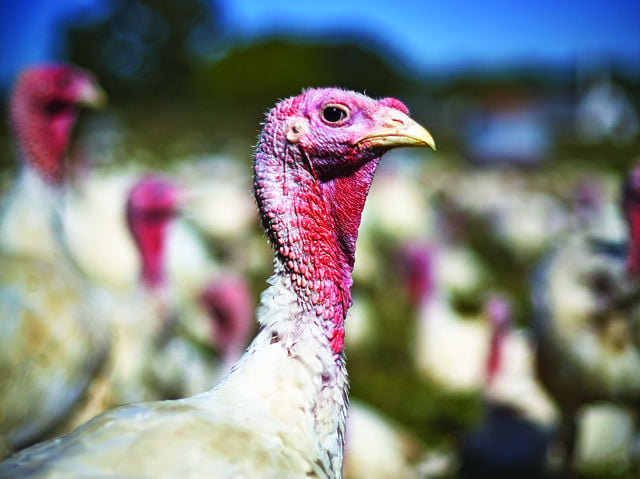 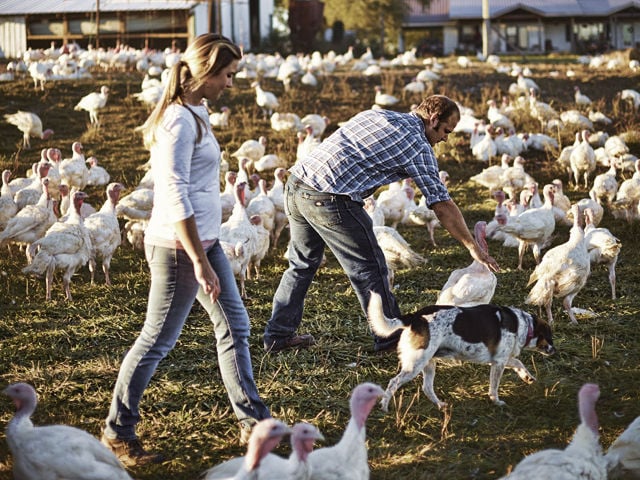 In 2010, within two years of graduating from the University of Missouri with a degree in general agriculture, 22-year-old Matt Tiefenbrun, and his wife, Eleanor (both St. Louis natives), bought 160 acres of land in California, Missouri. Shortly after, the couple founded Buttonwood Farm (named for the many sycamore trees that dot their fields), where they raise Cornish cross chickens and Broad Breasted White turkeys on pasture.

With the help of Shady Maple Farm, a Mennonite dairy farm and processing facility located just 8 miles from Buttonwood, the Tiefenbruns say their farm has been able to almost double in production every year. Thanks to strong family ties and support, the Tiefenbruns have built a loyal and robust client base in the St. Louis area, including restaurants such as Elaia, Farmhaus, Cardwell’s at the Plaza and Grapeseed, and their whole chickens and turkeys, chicken and turkey parts (legs, thighs, breasts and drumsticks), and ground turkey and chicken are sold in retail outlets including Bolyard’s Meat & Provisions, Local Harvest Grocery, Straub’s and Fields Foods, and included in CSAs such as Fair Shares CCSA and Mac’s Local Buys.

Recently, the farm released a line of sausages and brats made in partnership with Swiss Meat & Sausage Co. in Swiss, Missouri, including apple-cinnamon and turkey-cranberry brats, chicken andouille, chicken chorizo, turkey-maple breakfast links and turkey boudin.

And, this past September, Buttonwood introduced farm-fresh eggs for the first time, which are a hot commodity at Bolyard’s and through Fair Shares. As business continues to grow and thrive, the Tiefenbruns have set their sights on expanding into central Missouri and the Kansas City area, where their first clients include Café Sebastienne at the Kemper Museum of Contemporary Art, Voltaire and The Westside Local.

Matt, tell us about your turkeys. We do it the right way; we brood them in a barn and then they’re outside on pasture. We get their feed from a local feed mill where most of the grain is from nearby farms. It’s an all-natural (obviously no antibiotics or hormones) soybean and corn diet. There is grass under their feet from when they’re 8½ weeks old to when they’re processed at about 18 weeks. We get some a little older and some a little younger because some people want bigger [Thanksgiving turkeys], and some people want smaller. Hens usually average 18 pounds and toms about 22 to 24, but vary in size at the mercy of the weather. They’re always fresh, never injected with anything, never frozen. –Matt Tiefenbrun

Why is it important to you to raise birds on pasture? Back in the ‘50s and ‘60s, turkeys were raised on range, and that’s what I’m going back to. Those guys had it figured out. I think it’s fun to go back to the traditional way of doing things, to raise a heartier bird that tastes better. The turkeys in barns [on industrial farms] – if people were to see that, I’d sell so many more turkeys; it would be outrageous. [On industrial farms] turkeys are jam-packed into barns and half of their feathers are picked off, and I just don’t agree with the way they’re raised. I think my birds have a better consistency, a better taste and definitely a better quality of life. –M.T.

In September, you started selling Buttonwood Farm eggs. What’s been the response so far? We’ve been delivering eggs to B.K. Bakery in Jefferson City, and the baker is telling us how great they are – the whites, I guess, stand up a lot taller than a commodity egg, and the yolks are yellower. People like ‘em. It’s just a better egg. –M.T.

Eleanor, how did your new flavored sausages, brats and breakfast links made with turkey and chicken come about? We try not to waste anything, obviously, so when Matt cuts up a bird, aside from the breasts and thighs and other parts, there’s still meat leftover. That’s what’s used [for sausage and brats]. We went [to Swiss], sampled some stuff and chose flavors we liked, and it’s taken off pretty well – people especially seem to like the chorizo and andouille, and we just started the boudin. –Eleanor Tiefenbrun.

What do you love most about your work? I think it’s nice for people to have a free- range bird that really tastes good. It just tastes more like turkey than cardboard – commercial turkeys are just bland; there’s not much flavor. I think ours are easier to cook; they don’t dry out as easily. And they have more bite to them – they’re not soft and flabby, but they’re not tough, either. –M.T.

On social media, especially around Thanksgiving, people post photos of their cooked turkeys, and they’re really glamorous and beautiful. We get a lot of feedback that it’s the best turkey they’ve ever had. –E.T.

What’s next? If we can keep expanding a little bit each year, that’s my goal. I’d like to get bigger in Kansas City, and I think there’s still a bigger market in St. Louis, too. I don’t want to get too big too fast and lose quality or cut corners – we just want to grow at a steady pace, and I think that’s what we’ve done in the past two years. We keep the same clients – we don’t have people leave us, and I take pride in that. Chef Kevin Willmann from Farmhaus still puts an order in every week and has for six years. I think that kind of proves we’re doing something right. –M.T.

More One On One articles.