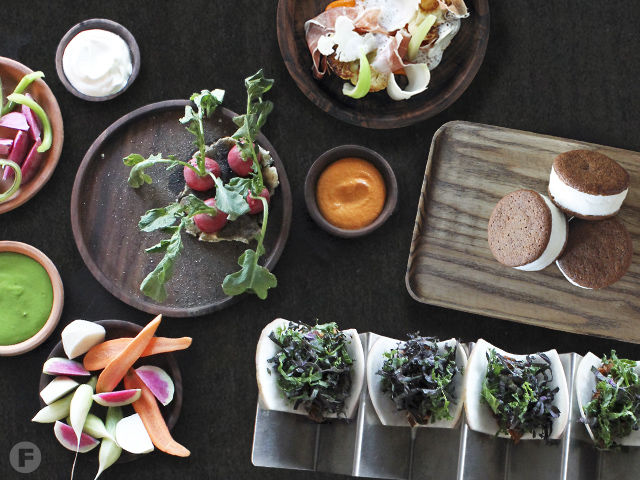 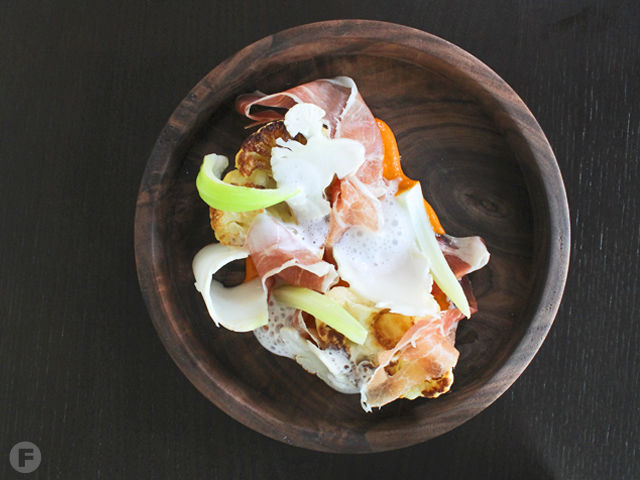 Roasted cauliflower topped with with culatello at Vicia. 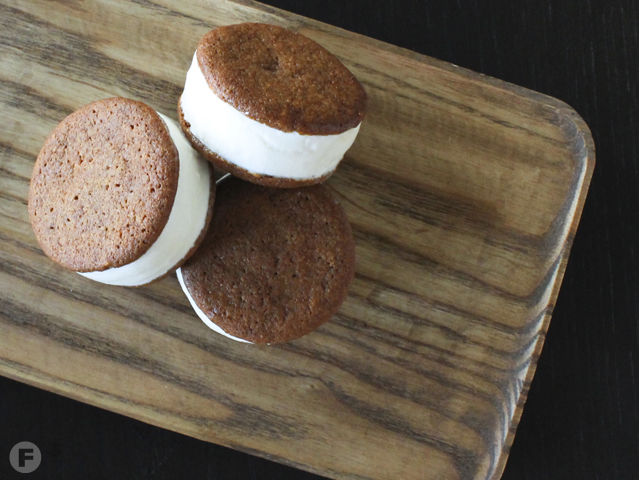 Vegetable-forward cooking has roots in noble causes, including addressing sustainability and health issues, supporting local farmers and eliminating food waste. This style of cooking rethinks the way proteins and vegetables can be used in dishes. Now, it’s making its way to the meat and potatoes-loving heartland.

Vicia isn’t vegetarian; it’s vegetable-forward. Michael and Tara Gallina’s highly anticipated restaurant, which opened last month in St. Louis, minimizes its food waste by using as much of the animal or vegetable as possible, including often-discarded bits and “ugly” fruits and vegetables. That philosophy was driven home for the couple while working as chef de cuisine and service captain, respectively, at Dan Barber's renowned Blue Hill at Stone Barns in Tarrytown, New York. “It’s a way to shift the perspective of what’s happening on your plate and recognize that it doesn’t always need to be a 10-ounce piece of protein. The vegetable can be given as much attention as the protein,” Tara says. “There’s so much you can do with vegetables; the breadth is almost greater than meat.” Lunch at Vicia is casual, with counter service and a small rotating menu of tartines, soups, salads and sandwiches, while dinner is a more elevated affair with shareable snacks, starters and mains. The Gallinas use vegetables in fun and unexpected ways – think Naked Vegetables (served raw) with dips like carrot hummus, vegetable-top pesto and tahina yogurt (a sauce of tahini, garlic paste and lemon); purple-top turnip tacos with chorizo, charred vegetable molé, kale and persimmon hot sauce; roasted cauliflower covered in culatello (a type of prosciutto) or even a parsnip ice cream sandwich with buckwheat gingersnaps.

While hosting pop-up dinners as a member of Soil Collective over the past year, chef Calvin Davis highlighted the importance of local sourcing, seasonality and using as much of a plant or animal as possible. That ethos carried over to Freshwater, the fine-dining restaurant he’s slated to open this month in Kansas City’s Midtown neighborhood. Freshwater aims to offer a fine-dining experience at a more affordable price, and its vegetable-driven dishes help make that possible. Meat still has a place on the menu – in particular, Davis is excited about the restaurant’s charcuterie program – but many of the small plates are vegetable-focused, including sunchokes served with cardoon, shallot and nasturtium. When proteins are used, it’s more for garnish and flavor – like the Malabar spinach, which features a poached egg, endive, black pepper and lardo. Davis also takes care to highlight vegetable scraps. A recent braised pork pasta dish, for instance, featured puréed, confited and roasted sunchokes; Davis also took the leftover skins from the sunchokes and fried them into chips. “So many people take for granted the food that they have and don’t even know there’s a possibility to use more of it,” he says. “At every step of the process I just try to stop and look at what I’m doing, think about it and ask myself, ‘Why not?’”

There’s a simple impetus behind the vegetable-driven dishes served at The Antler Room in Kansas City: Chef Nick Goellner, who owns the restaurant with his wife, Leslie, loves eating vegetables. “A steak is a steak is a steak," he says. "Plants are different: There are so many different varieties and that’s just really exciting to us.” Plus, making use of the parts of vegetables that others might discard – pesto made from carrot tops, for instance – saves money. The restaurant preserves as many fruits and vegetables as possible to use throughout winter, a mission Goellner picked up while interning at the world-renowned Noma in Copenhagen, where preservation is key due to the short growing season. The restaurant also uses fruit and vegetable scraps to make oils and salts: After juicing beets, for example, the leftover pulp is dehydrated into a powder and blended with salt to make beet salt.

Tips From the Chefs: Ways to Reduce Food Waste at Home

▶ Boil down vegetable scraps to make a stock for soups

▶ Lightly sauté Swiss chard stems, then braise in the oven

The Kansas City restaurant is currently closed for business.

Vicia is One of the Best New Restaurants in the Country, Says Eater

Roasted cauliflower topped with with culatello at Vicia.