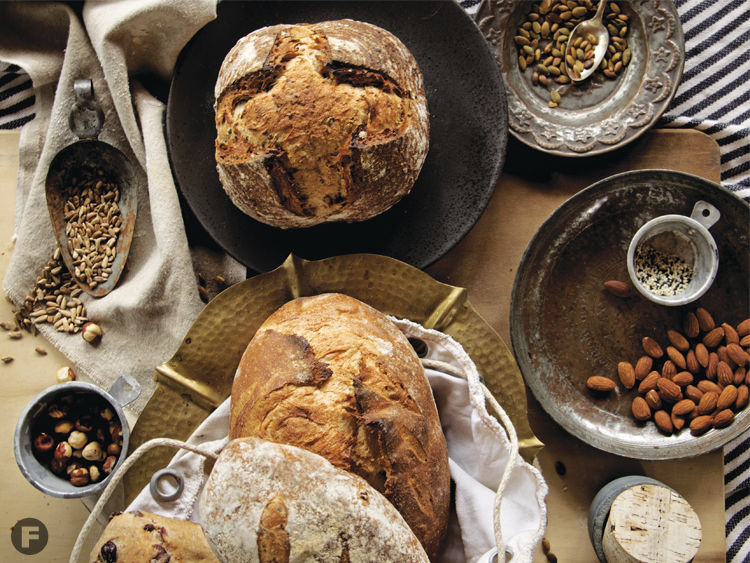 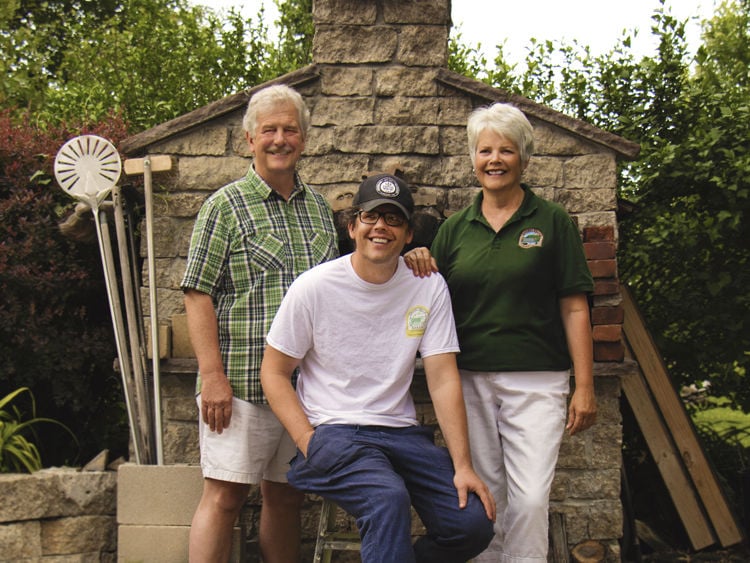 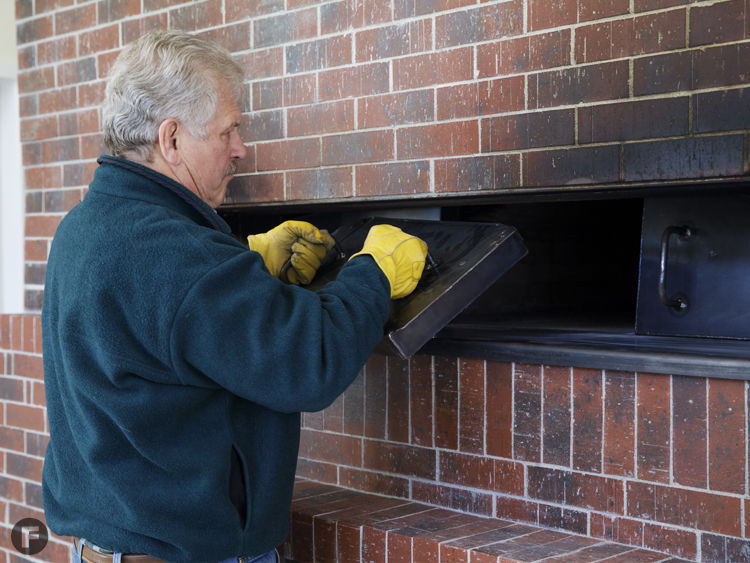 Carl installing the plug doors on the oven. 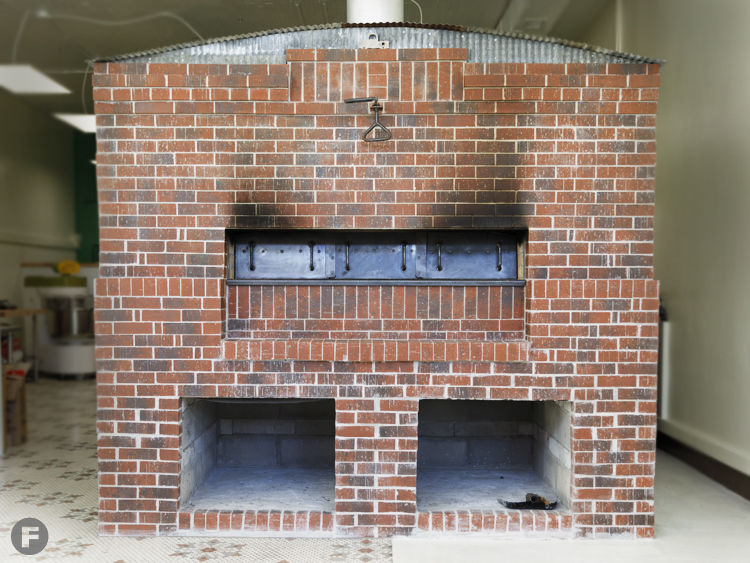 Both cube-shaped areas will soon be covered by doors. 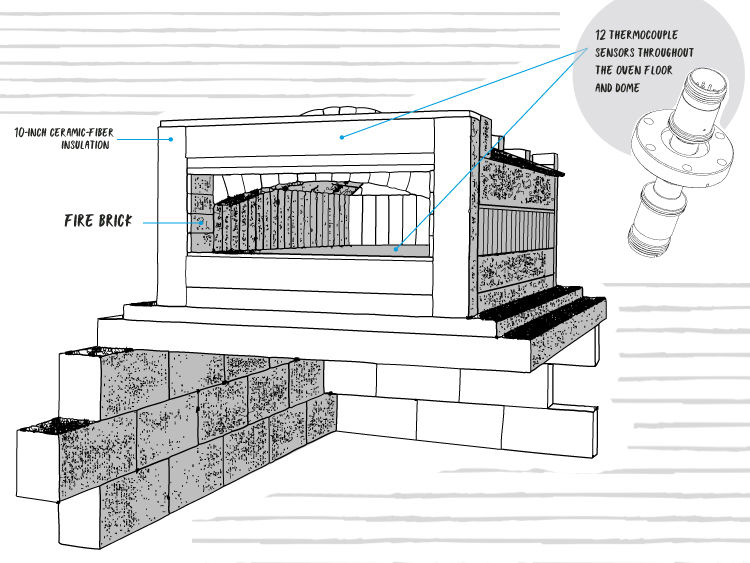 Carl installing the plug doors on the oven.

Both cube-shaped areas will soon be covered by doors.

At Green Truck Bakery in downtown Warrensburg, Missouri, Carl and Ryan Schick bake a rotating menu of 15 to 18 breads, plus crackers, granola, biscotti and laminated pastries in a massive new custom 17-ton wood-fired oven they built themselves. Enclosed on three sides by fire-brick walls, floor and ceiling, the oven bakes using retained heat. A live fire is built directly on the hearth and burns until it reaches the desired temperature. The coals are then spread out across the hearth to even the heat; any ash is brushed out before baking. As the temperature slowly lowers over the next few days, it provides the oven with ambient heat – what’s known as a falling oven.

“Retained heat is really a matter of how much thermal mass you have, and we decided we wanted a lot of thermal mass,” Carl says. “Our thermal mass, the product that holds the heat for us, is just fire brick. And our oven, all parts of our oven – the back, the sides, the floor, the top – they’re all 9-inches thick of fire brick. That’s the mass that retains the heat.”

Green Truck is a family business for Ryan, (who's head baker), Carl and his wife, Carmen. Up until this year, the preservative-free bakery has vended at the farmers’ markets in Warrensburg and Sedalia, Missouri, and offered a subscription service to customers. Last month, the Schicks celebrated the opening of Green Truck’s first brick-and-mortar bakery in Warrensburg, complete with the custom falling oven built by Carl and Ryan over the course of eight months.

“We’re expecting it to hold heat for about five days,” Carl says. “So we’ll be able to start baking things that require a higher heat the day after we build the fire, and then our baking schedule is based on the rate that the oven cools off. For example, we’ll heat it up until the inside surface of the oven is about 850ºF, and we close up the oven and the heat evens out. When it reaches close to 500ºF, we’ll start baking the bread."

Father and son also installed six thermocouple sensors in the hearth’s floor and six in the top dome so they can easily gauge the temperature of the massive oven.

“We can dial our gauge to any one of those six thermocouples in the hearth, and it will tell us what the temperature is right at that point,” Carl says. “So when our oven is hot enough that the thermocouple that’s 8 inches away from the surface hits around 500ºF, that’s time to stop putting wood in it.”

The oven can bake 70 loaves of bread in 20 to 25 minutes, depending on the type. As the fire dies and the temperature falls, dough that requires less heat is baked; at Green Truck, that includes crackers, flatbreads, laminated pastries like croissants, and soon, personal pizzas, pretzels and bagels.

The size of the oven and its potential for firing at higher temperatures were just two upgrades Carl and Ryan wanted to add to the new oven. The oven door is set up to eventually have an automatic loader installed – as Carl says, “I’m a little older, and my son realized that he may not have as much help in the future” – though for now, Ryan wants to keep using a peel to load up the oven. In all, there are three sets of interchangeable oven doors: blast doors for when they’re building the fire and heating up in the oven, plug doors to hold heat inside the oven and ensure it stays even, and slapper doors for keeping heat and moisture inside the oven when opening and closing them during baking. This flexibility is a big change from their original backyard oven, which was only built with one set of doors.

“We decided that the easiest route to go was to have several different door options,” Carl says. “So during the cooking cycle, we can take one door off and put the other door on if we want to change the function of the door.”

As a result of these modifications, the Schicks are hopeful that the new oven will improve the quality of their products as well as their volume and efficiency.

“This is going to be a learning experience,” Carl says. “We’re not starting from scratch, but we’ll have to learn as we go. We’re expecting that the crust of the bread should have a more even and attractive shine to it. When artisan bread is baked, depending on the amount of moisture in the air, it can either be a very dull appearance or a somewhat shiny appearance. The moisture in the air keeps the crust flexible for a few more minutes, and it can expand a little further as the bread rises. And then that extra moisture in the air creates a slightly shiny coat on the surface of the bread. So we’re expecting that to be different. We think what we’re really going to have to learn is what order to put [which] bread in [the oven].”

Perhaps the biggest adjustment for the Schicks at the new bakery, though, will be baking in front of an audience.

“In our backyard, there [was] nobody else there,” Carl says with a laugh. “With our new oven, people can walk by the front of the bakery and just look in and see us baking. When you walk in and look to your right, there’s the oven. It’s the main feature.”

At Windsor Street Montessori School in Columbia, Missouri, chef Gaby Weir Vera is educating the next generation of eaters