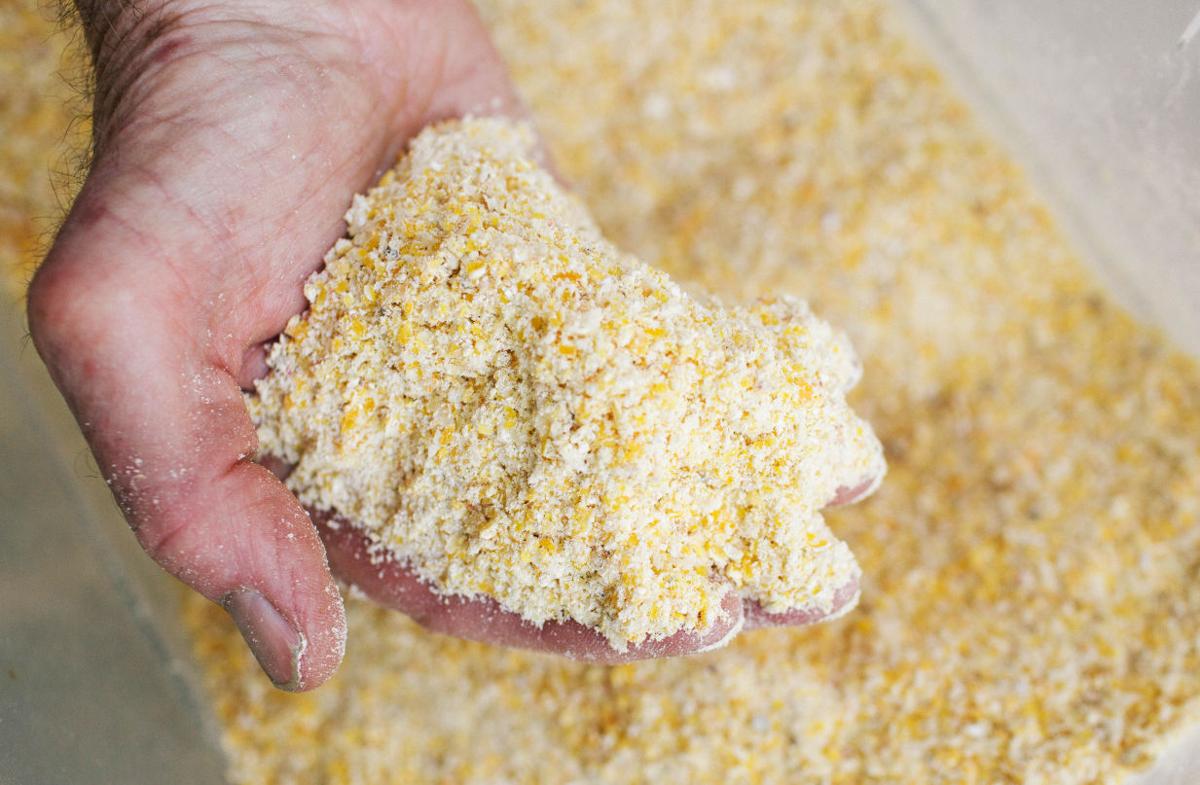 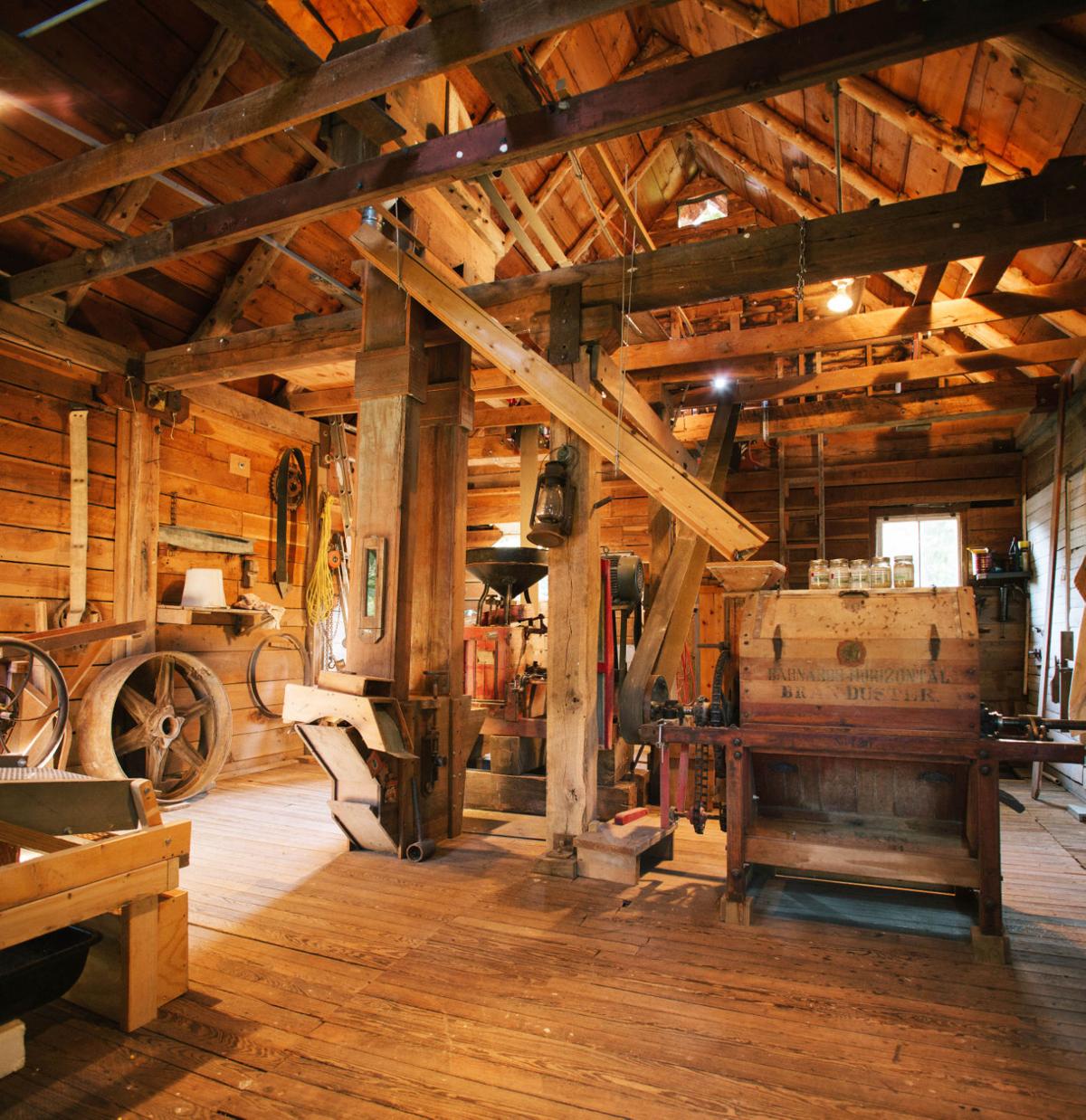 To really get an idea of how much labor and love Clyde has poured into Britain Mill, you have to step inside. 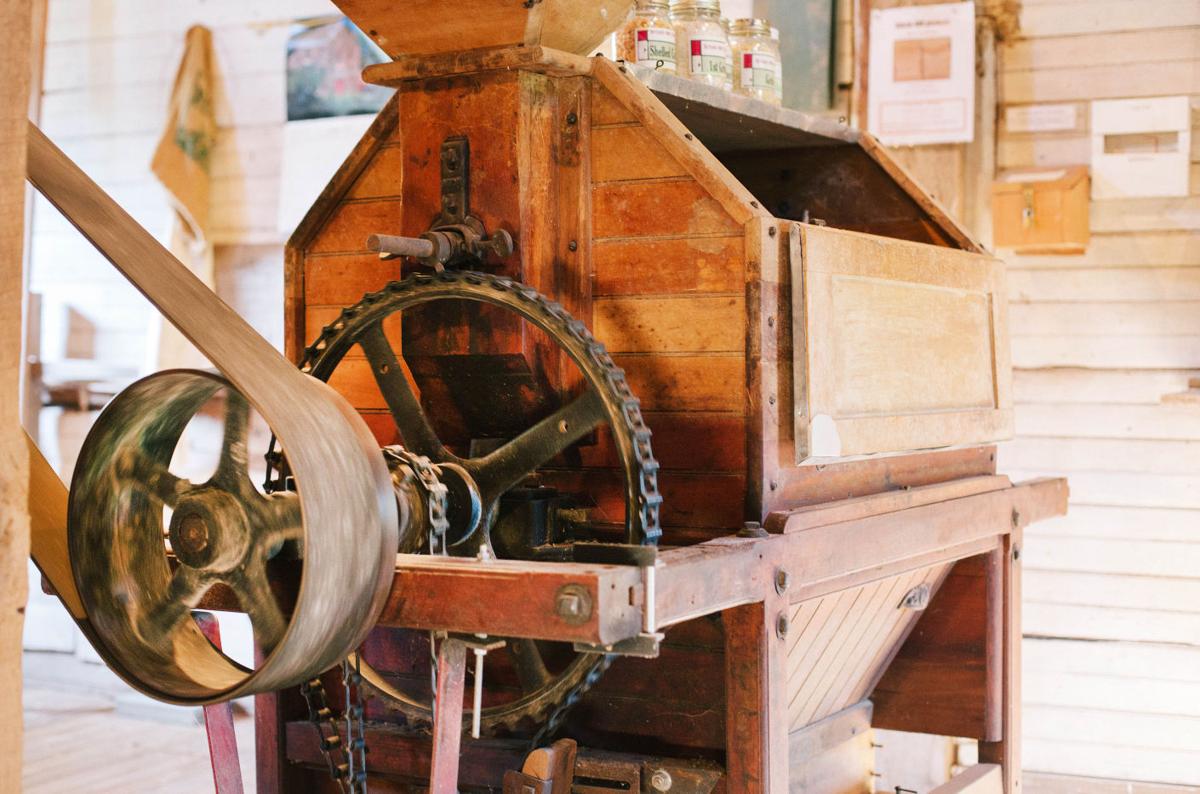 The corn meal sifter dates back to 1892, when Britain Mill was a two-story operation, and is one of the oldest pieces of equipment in operation at the mill. 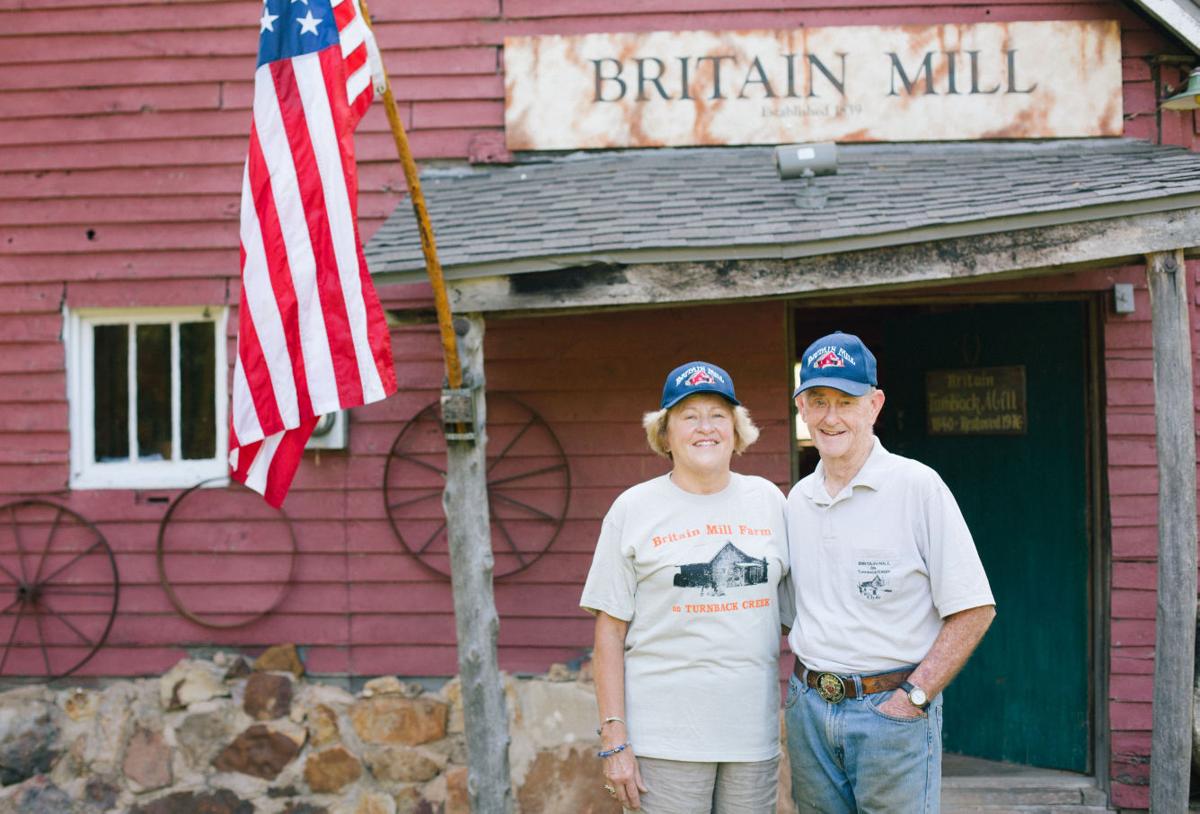 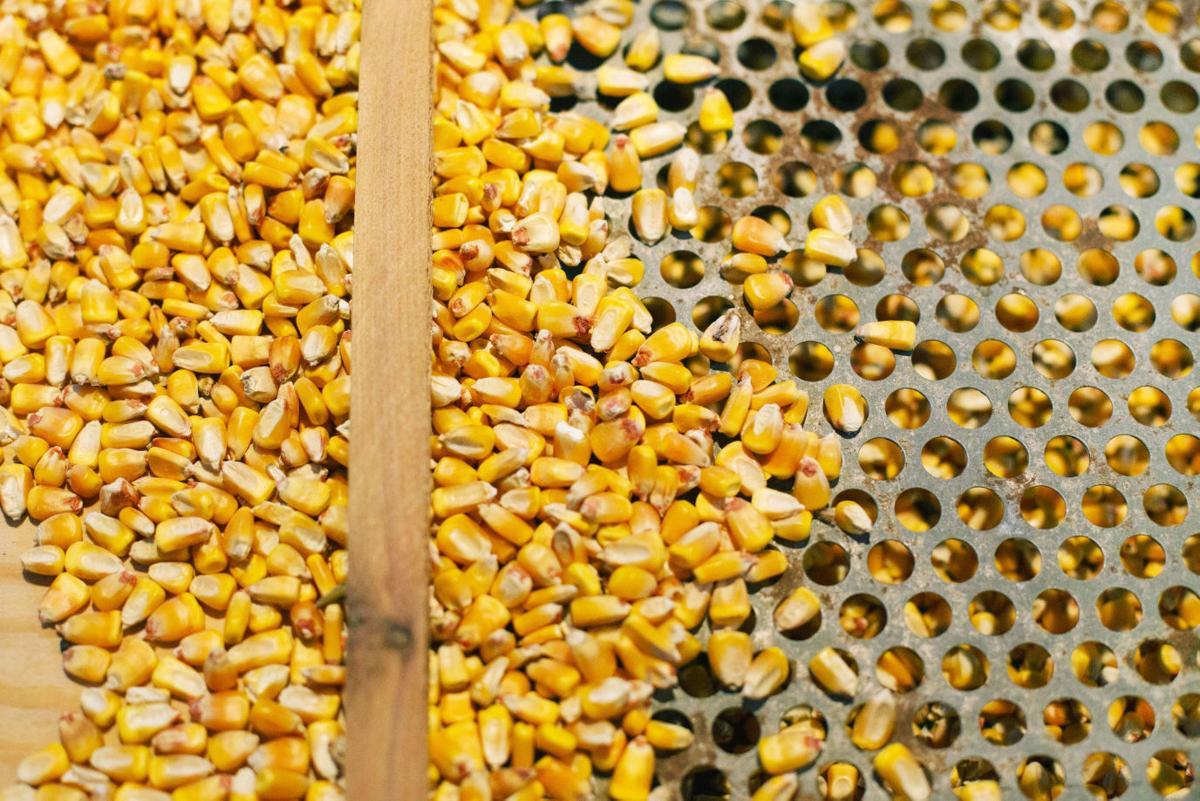 The first part of the milling process is to shake the corn kernels through a large metal screen to remove unwanted debris. 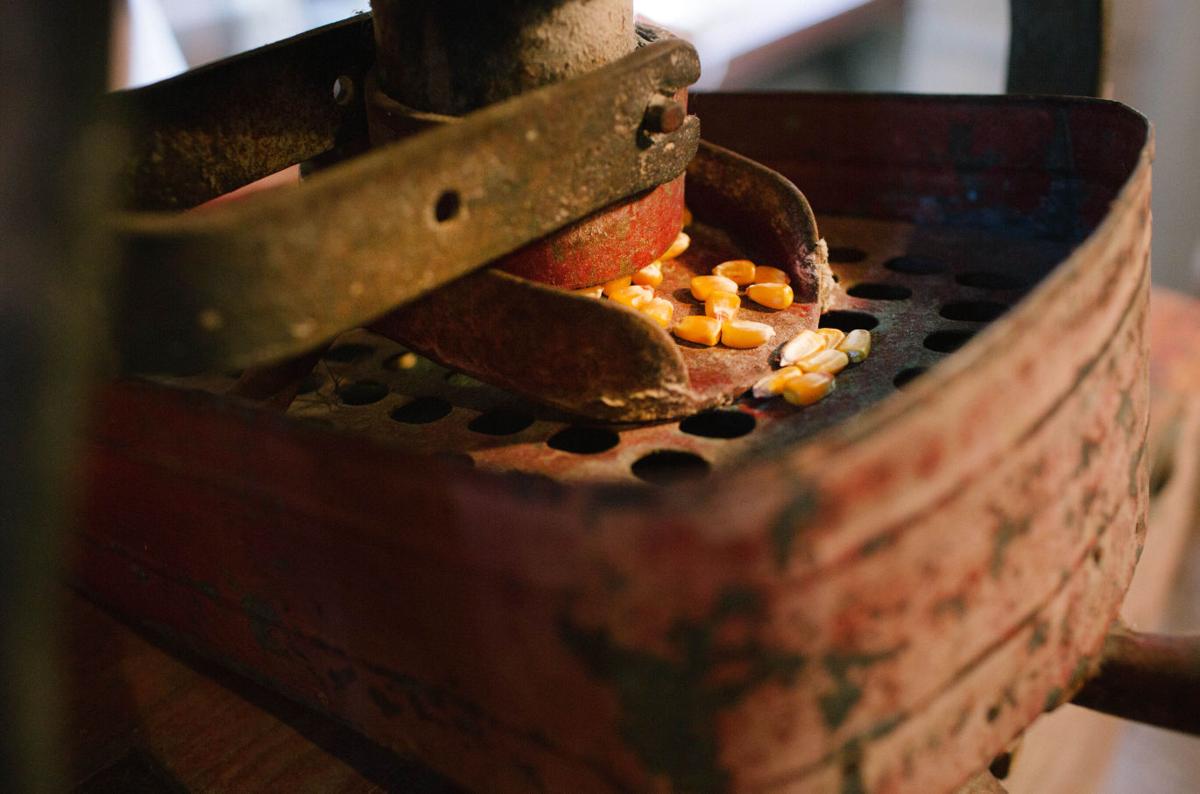 Corn kernels go through one last screen before falling into the milling stones at Britain Mill. 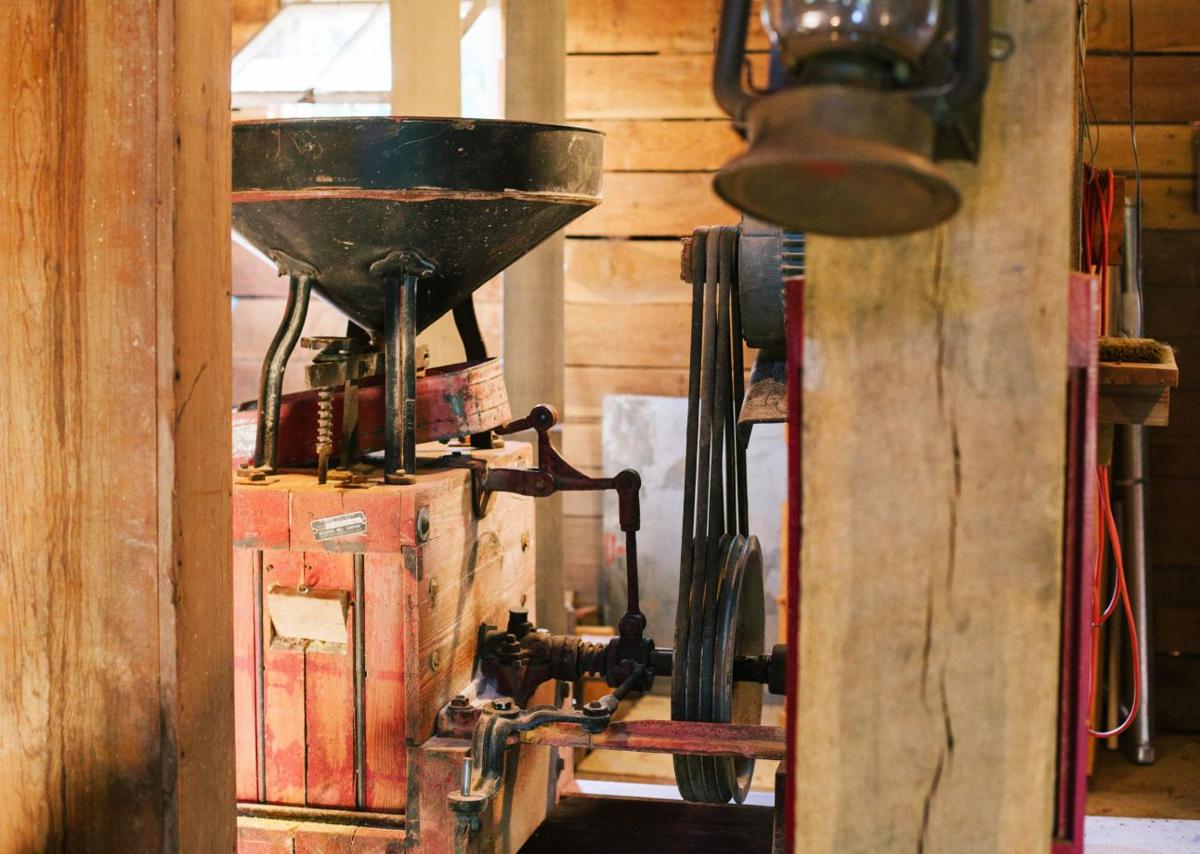 The milling stones are enclosed in a wooden box and now powered with electricity. 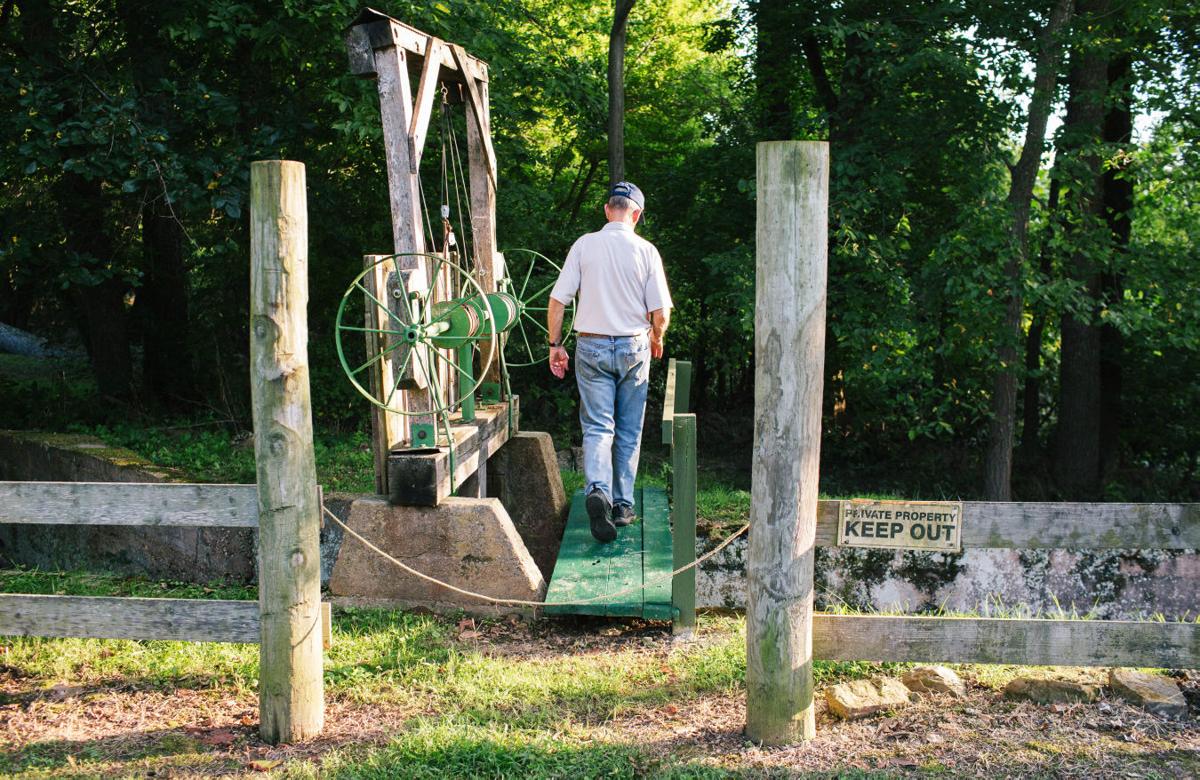 Clyde Beal walks across an unused water channel built for a previous incarnation of Britain Mill. There are three different water channels for the three mills that have been built at the site. 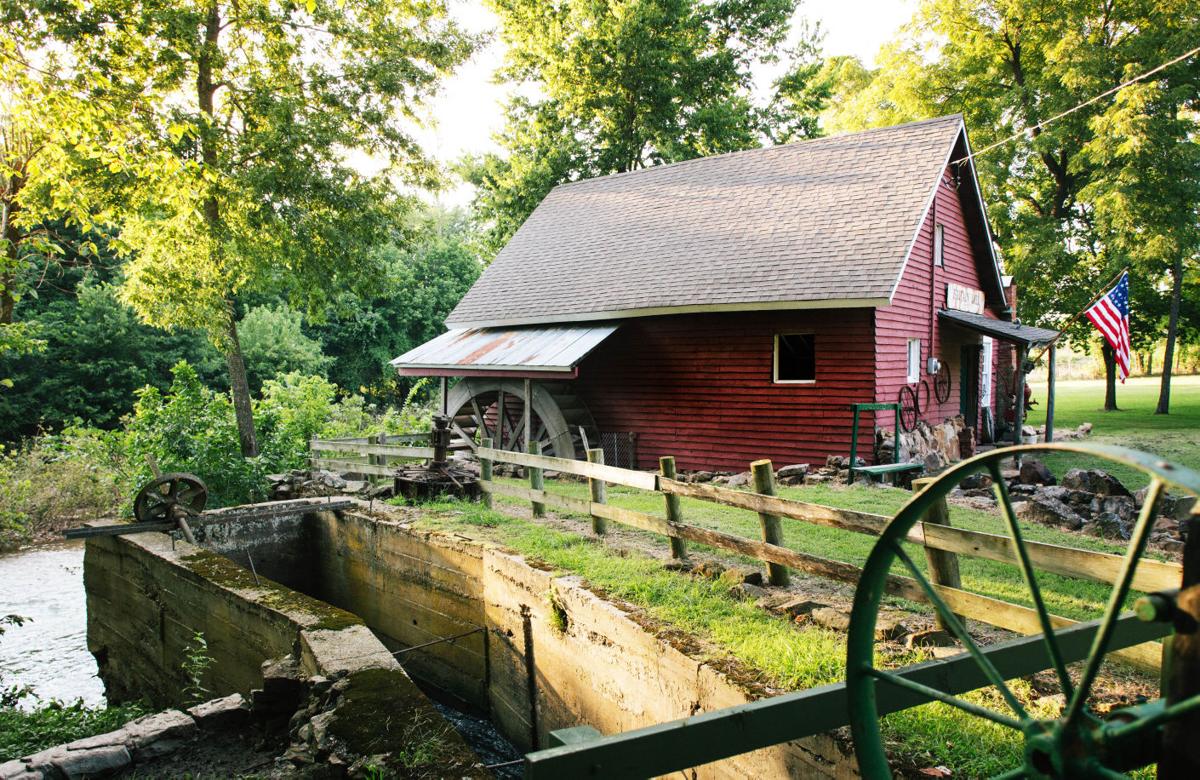 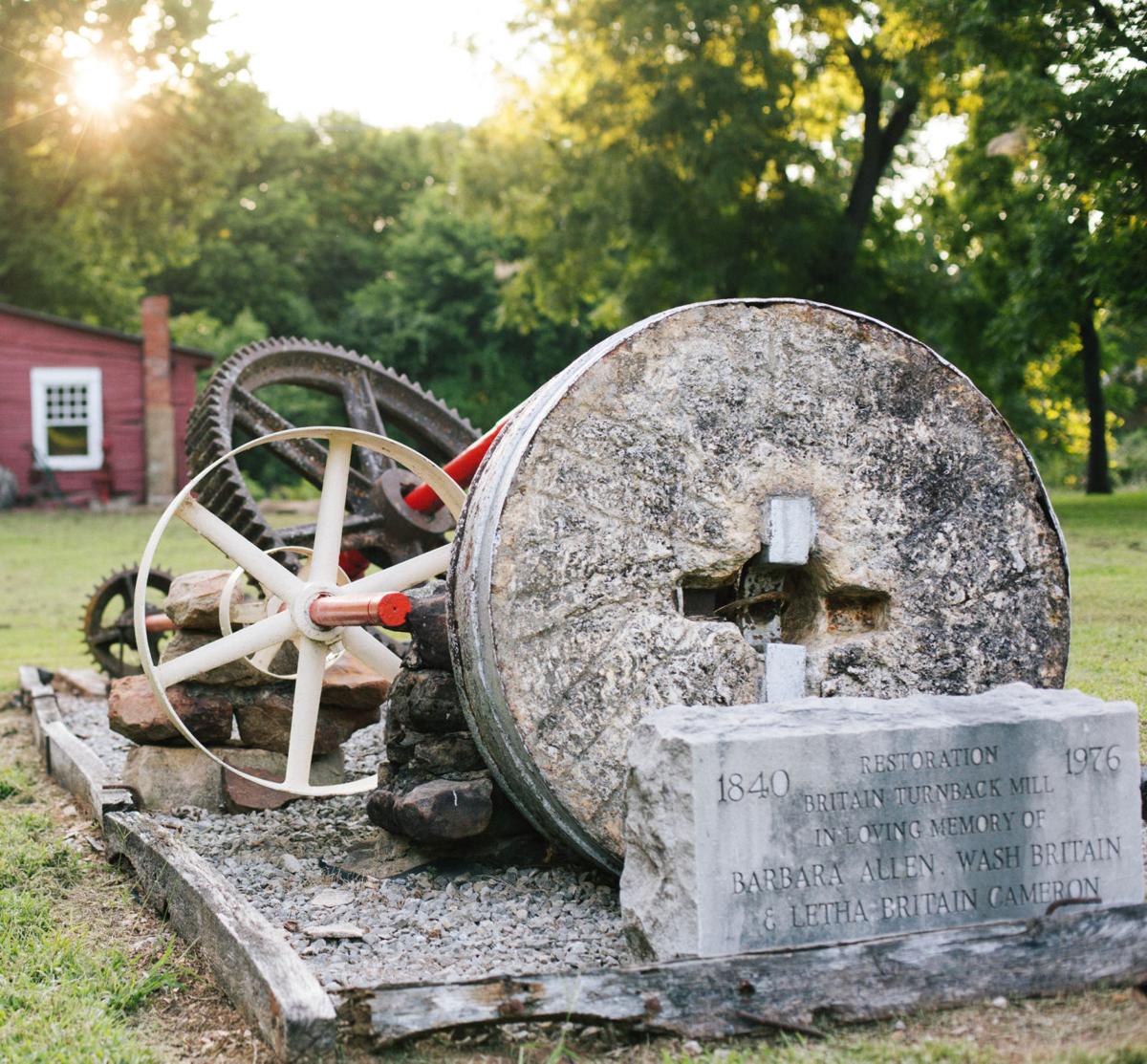 A memorial made by Bill Cameron of old mill parts sits in the field in front of Britain Mill. Cameron was the last owner to rebuild the mill. 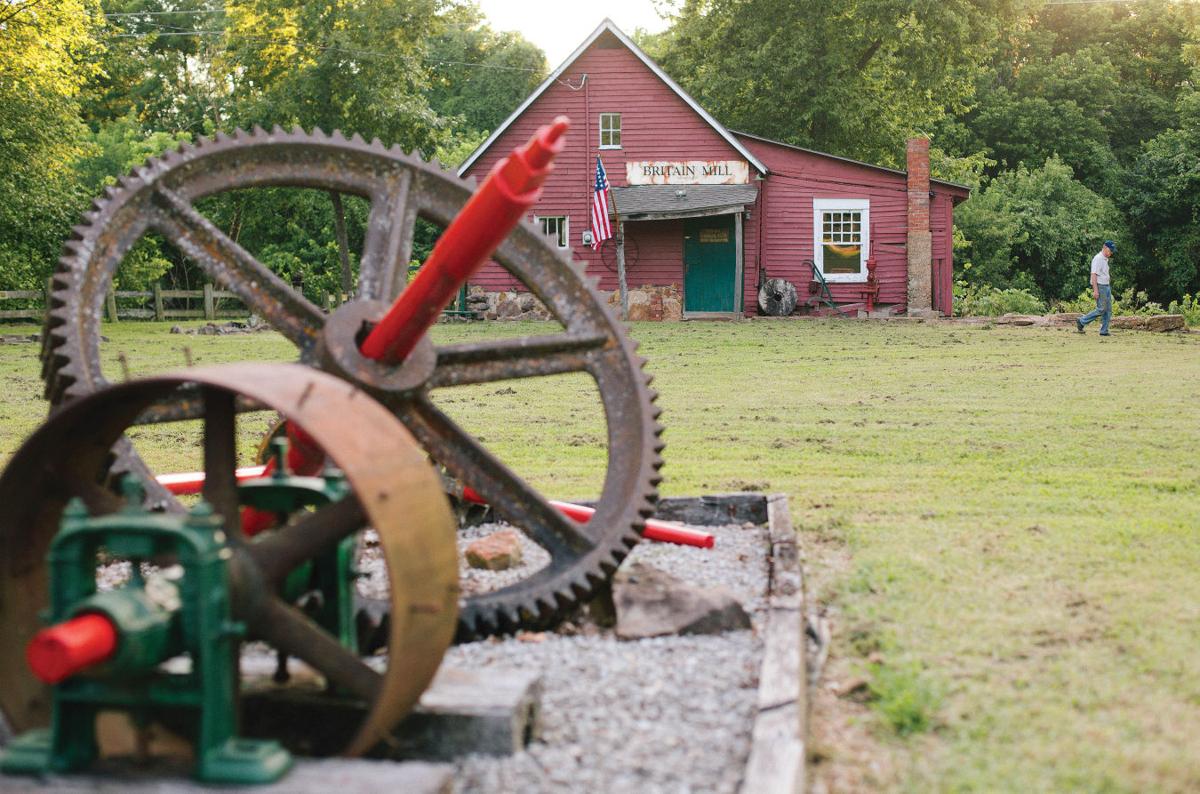 Back in pioneer days, mills were the center of activity, and towns often popped up wherever a mill was built. 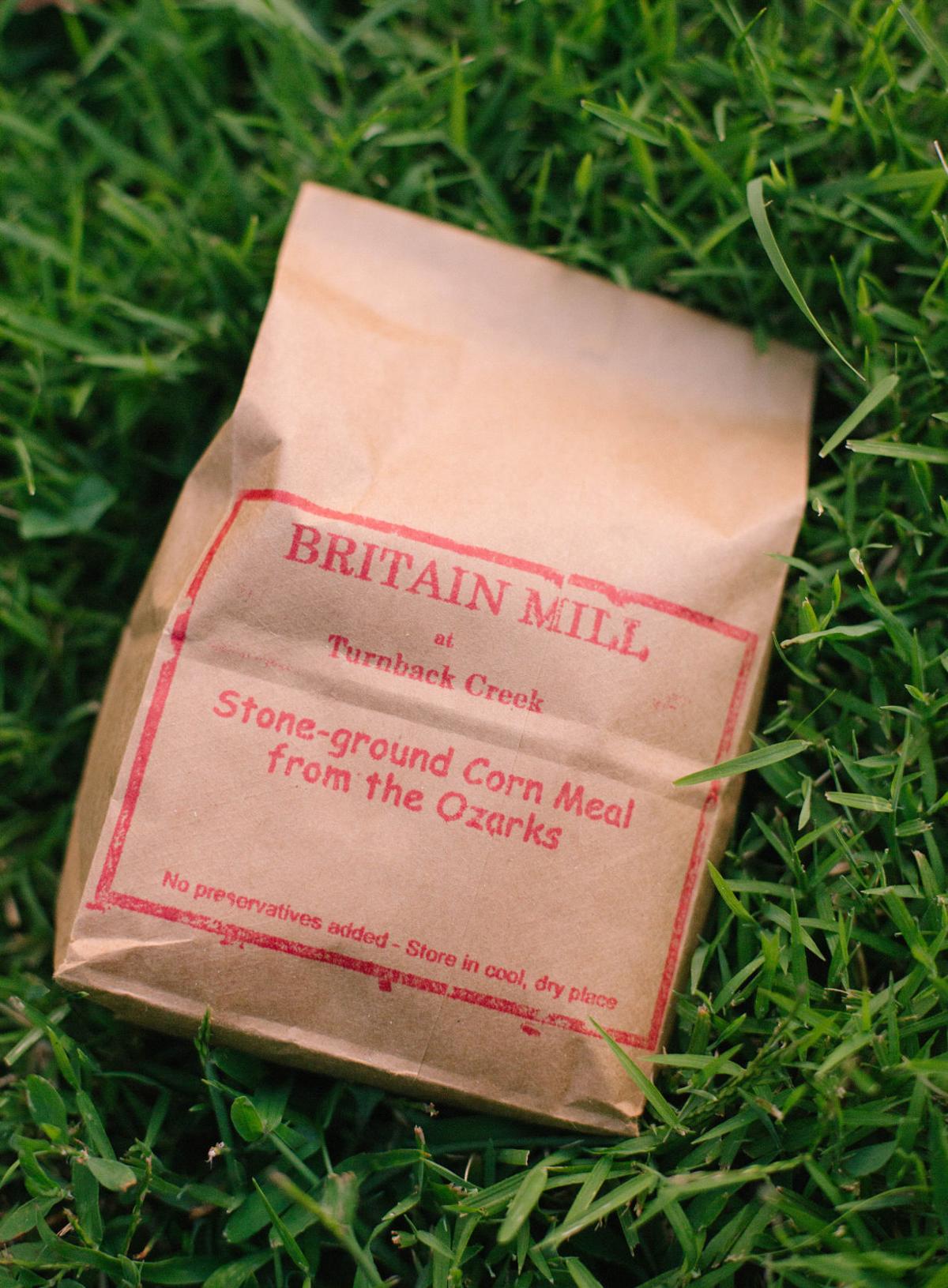 A package of corn meal from Britain Mill.

To really get an idea of how much labor and love Clyde has poured into Britain Mill, you have to step inside.

The corn meal sifter dates back to 1892, when Britain Mill was a two-story operation, and is one of the oldest pieces of equipment in operation at the mill.

Corn kernels go through one last screen before falling into the milling stones at Britain Mill.

The milling stones are enclosed in a wooden box and now powered with electricity.

Clyde Beal walks across an unused water channel built for a previous incarnation of Britain Mill. There are three different water channels for the three mills that have been built at the site.

A memorial made by Bill Cameron of old mill parts sits in the field in front of Britain Mill. Cameron was the last owner to rebuild the mill.

Back in pioneer days, mills were the center of activity, and towns often popped up wherever a mill was built.

A package of corn meal from Britain Mill.

"Hold on. I was going to give you a dissertation on this."

It’s a hot and sunny afternoon, and Clyde and Janet Beal are giving a tour of their 50-acre property 20 miles west of Springfield, Missouri. With a camera slung around his neck and thick hiking boots on his feet, Clyde, 79, stops every now and then to snap a photo of a wild mushroom or of a great blue heron that suddenly pops into view. “Every inch of this property is beautiful,” Janet says. But it isn’t the rugged wilderness or the gurgling creek that brings people out here. It’s the 170-plus-year-old grist mill that Clyde brought back to life 10 years ago.

“I call it rehabilitation rather than restoration,” he says, continuing his dissertation. When the couple moved into the home 13 years ago, the small mill was in shambles. The massive wooden water wheel had fallen into disrepair, and the inside was a mess of dilapidated rafters and tattered insulation. As Clyde puts it, the mill had become a luxury hotel for mice, which were its sole inhabitants. One year after moving onto the property, Clyde decided to bring the mill back to its former glory.

“I didn’t know beans about corn,” he says. As a production executive for Lockheed Martin in Florida, Clyde had never rehabbed a mill before, but there was something about its history and the beautiful pastoral property that hooked the couple’s interest.

“We were living in Florida and looking for a place to retire,” Janet says. “We looked in Georgia and all over the Southeast, but we couldn’t find just what we wanted. Then I saw this house listed in Country Living. It said there was a creek and a mill on the property. I had always loved mills. There’s something romantic about them.” With a call placed to the realtor, the Beals drove up from Florida that weekend and put an offer on the house. A few months later, Janet had her mill.

Hugged on all sides by towering cedars, hardwoods and fragrant redbuds that bloom each spring, the Beals’ property is a rare slice of undeveloped natural beauty near Springfield. To navigate the rough terrain, Clyde built 1½ miles of walking trails that snake through the trees and along the bluff overlooking Turnback Creek. The creek, which starts somewhere in Billings, Missouri, makes a sharp east-to-west run right through the middle of the Beals’ backyard. To cross it, Clyde engineered and constructed a self-service ferry that’s straight out of The Adventures of Huckleberry Finn. Passengers stand on a small wooden platform that floats on top of the water. To move, one pulls the rope tethered on each side of the muddy bank. It’s simple, efficient and proved a much easier project than rehabbing the dilapidated grist mill.

The mill dates back to the mid-1840s. By the time the Beals took over the land, the mill had seen about five owners and undergone several rounds of rebuilding. According to Clyde’s research, a man named Bill Cameron was the last to rebuild the mill, restoring and relocating the collapsed two-story version to a replica of the original one-story mill at a new site. Cameron is also responsible for the Edwards Mill at College of the Ozarks in nearby Point Lookout, Missouri. Clyde loves uncovering these tidbits of history, like learning about one past owner who was beloved by local schoolchildren for helping them regularly cross Turnback Creek. Then there’s the story of how the mill’s dam was dynamited in the mid-1940s – it’s rumored either disgruntled landowners or Ozark fishermen were to blame. Clyde has spent years flipping through property titles and newspaper clippings, slowly piecing together the story behind what he has named Britain Mill – a tribute to the last commercial operators who named it Britain Mill on Turnback Creek.

“This is where the tour starts,” Clyde says, standing in front of the painted red mill. Before heading inside, he pauses in front of a memorial Cameron dedicated to his wife – it’s made of large pieces of equipment and a long shaft with a bevel gear close to 20 feet long. Clyde is wearing a collared shirt with Britain Mill embroidered on the left side, and as he’s walking along the stoned-in bank, water rushes past and spills into Turnback Creek at a deafening speed. He gives his guests detailed accounts of each switch, water turbine, bevel gear and a bit of history about the mill. It’s the mind of an engineer at work, but to really get an idea of how much labor and love Clyde has poured into Britain Mill, you have to step inside.

Back in pioneer days, mills were the center of activity, and towns often popped up wherever a mill was built. Missouri riverbanks and waterways are still dotted with the ruins of once-working mills, and Britain Mill is the only operating survivor in Lawrence County. Large pieces of equipment fill the small space. A few were here when Clyde and Janet moved in, but most had to be added or built by Clyde. He even rebuilt the 14-foot water wheel outside, which is no longer water-powered, but with one push it slowly spins to life – much to Janet’s amusement. “I used to come out here in the summer when Clyde was working in the heat,” she says. “I still can’t believe he rebuilt this.”

Clyde can grind 50 pounds of corn in one hour. That gets him 40 pounds of product, the majority of which is cornmeal, with a few pounds of grits. “That’s not bad,” he says. “Consider how long it would take you to eat 40 pounds of cornmeal.” The mill only gets used six times a year, which means it isn’t a commercial operation. Clyde and Janet keep most of the cornmeal and grits stored in a fridge in the garage and share their haul with family, friends, neighbors and visitors. For $2, guests can take a sack of cornmeal home, and $3.50 gets them a sack of grits.

The milling process starts with a piece of homemade equipment; bags of corn kernels are poured onto a large screen that Clyde gently shakes. Dust and small debris fall through the screen, and the clean corn tumbles into a bucket. The corn then goes into a hopper where 16-inch stones grind it into a fine meal before it’s scooped up by an elevator fitted with small metal cups attached to a belt. The elevator hauls the ground corn high into the air where it’s dumped into the sifter, and the contents are sorted into cornmeal, grits and middlins.

“The cornmeal comes out of these four slots, and the grits come out of these two slots,” Clyde explains, pointing to the machine’s sifter. Next, he transfers the grits to a separator he made himself. He turns on an antique cast-iron fan that belonged to Janet’s family and watches as the grits and the bran – the part of the kernel he doesn’t want – are separated. “Forced air separates the different density particles,” Clyde explains. “The grits are dropped through an air current [from the antique fan], which blows the lighter-weight bran material into a metal pan under the separator while the heavier grits fall into a wooden bucket.”

It’s the grits Clyde likes most. They’re creamier than the store-bought kind and have better texture. “People who don’t like grits haven’t tried mine,” he says. The same can be said of Clyde’s cornmeal: It’s much grittier and has an almost savory flavor. Clyde and Janet use the cornmeal to make apple corn cakes for breakfast topped with cinnamon applesauce or maple syrup. They also make loaves of cornbread throughout the year, and Clyde makes pans of cheesy grits that Janet raves about.

Rehabbing the mill is Clyde’s tribute to those who came before him. Even after 10 years, he continues to stumble upon new stories and pieces of the mill’s history, like when the great-great-granddaughter of the mill’s last commercial operator stopped by for a visit earlier this year.

“She had only visited the mill when she was 8,” Clyde says. “She added to our collection of history.”

As Clyde snaps photos of the mill’s exterior, revived with a coat of burnt red paint, it’s hard to believe how much work he has put into its restoration, and it’s hard to imagine what the mill will look like years after Clyde and Janet no longer tend the property. In some ways, the couple are just the current caretakers. Many have come before, and Clyde hopes many will come after them. Their daughter isn’t interested in taking on the property, and letting it fall into disrepair once again is a heartbreaking prospect, so for now, the couple continues chugging along, freshening coats of paint, repairing broken machinery, mowing trails through the woods and enjoying their role in the mill’s story.

Ask Clyde why he chooses to spend his time working on a historic grist mill, and he just shakes it off. “I’m retired,” he says. “So why not?”

Britain Mill is available for tours by appointment. Contact britainmill@gmail.com to learn more.