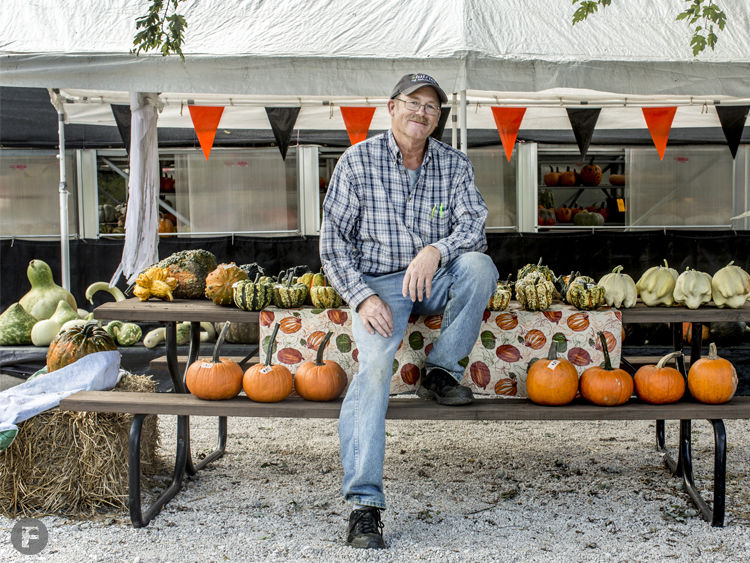 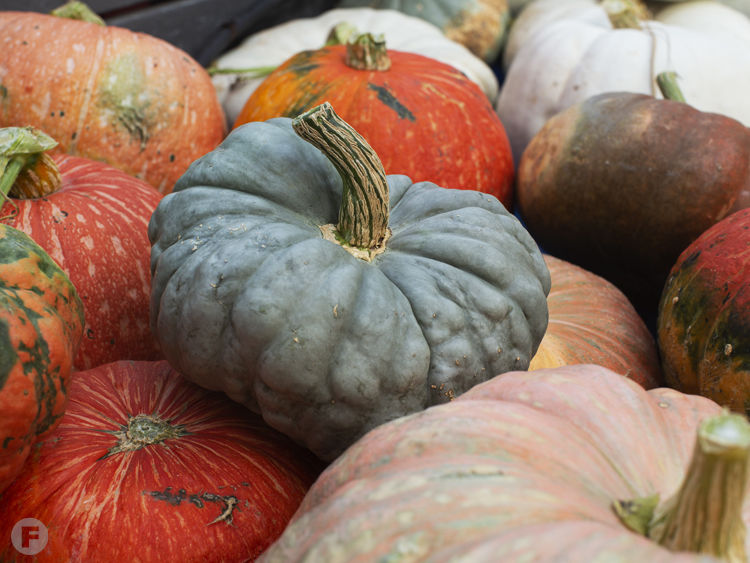 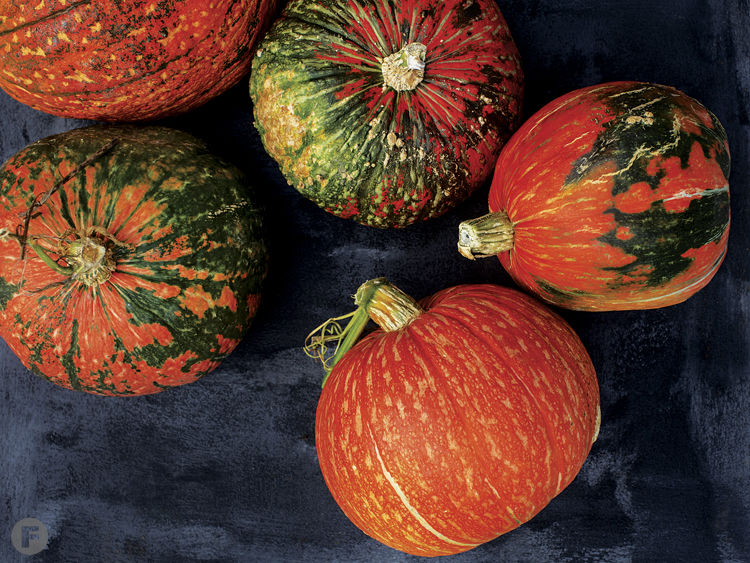 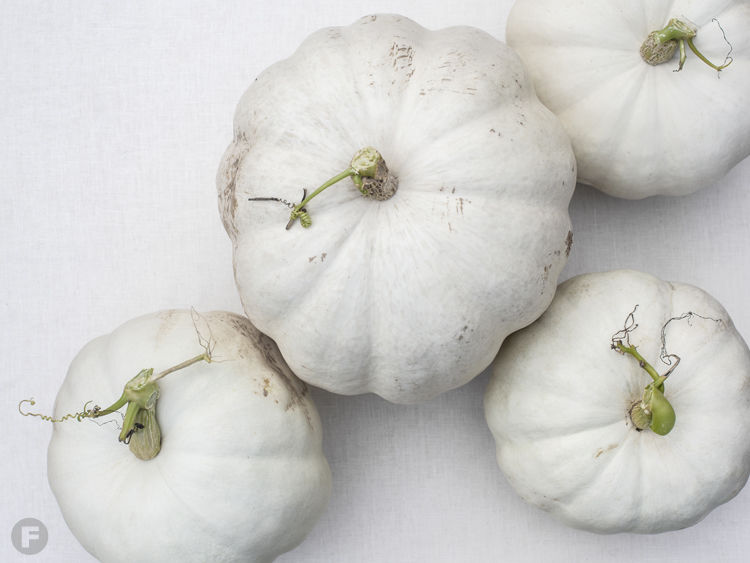 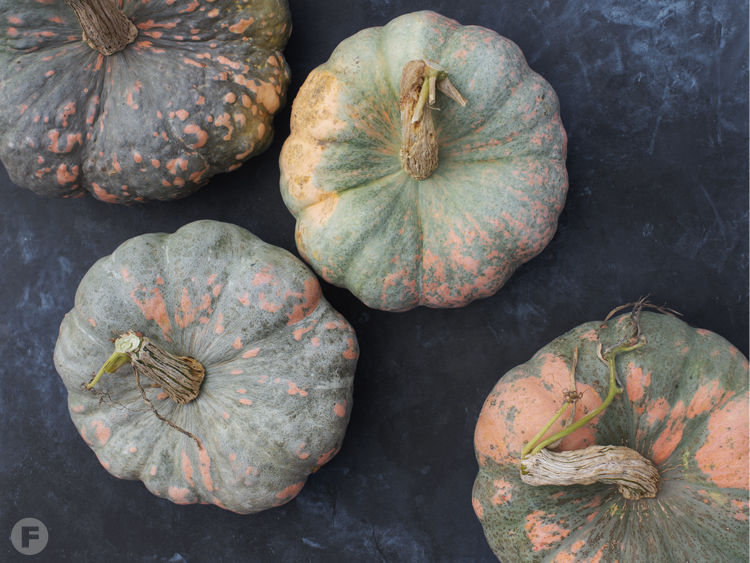 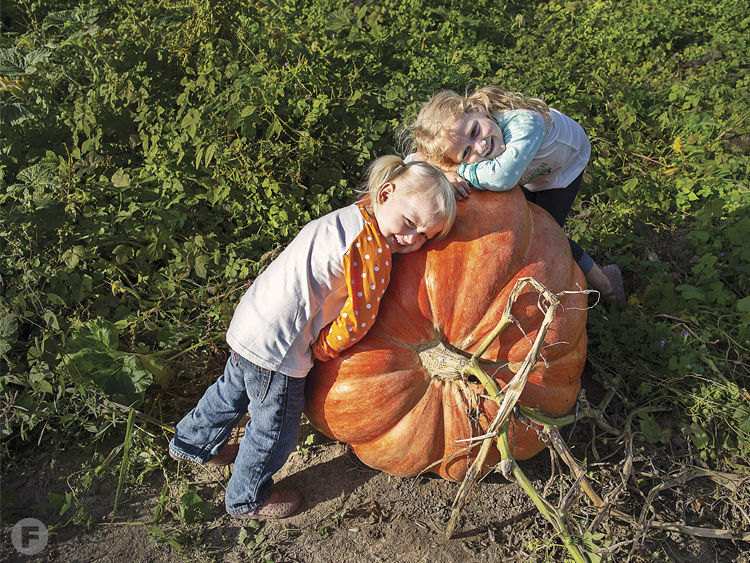 People come from all over Missouri and Illinois to shop Diffey’s impressive fall crop. 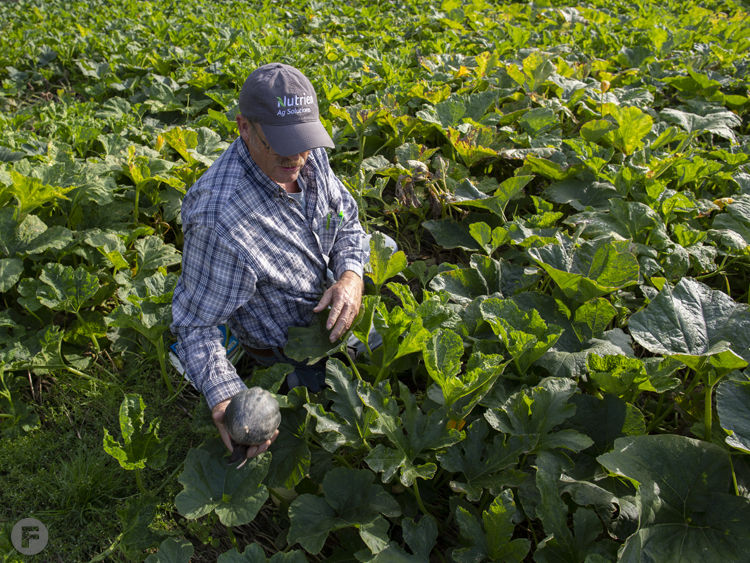 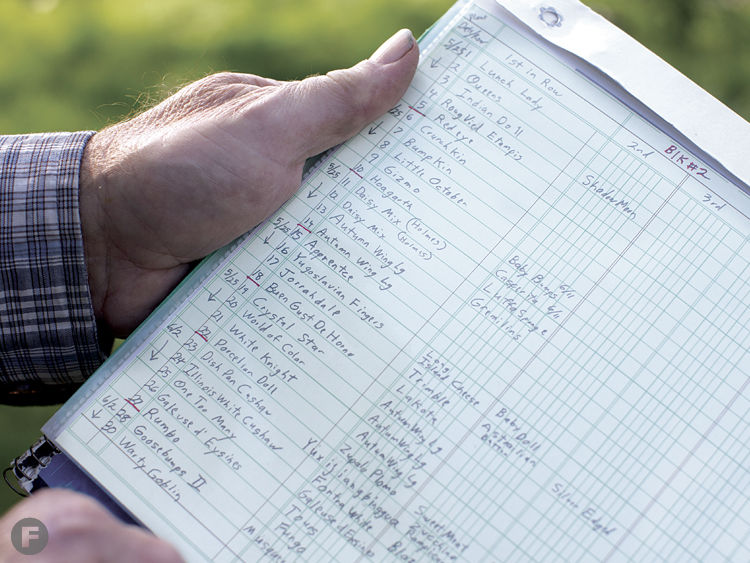 People come from all over Missouri and Illinois to shop Diffey’s impressive fall crop.

Sometimes, when Jack Diffey is out in his fields picking pumpkins, he gets hungry. He starts harvesting in earnest just before Labor Day, and luckily, that’s when his Tiger Baby watermelons are just about ready. Diffey brushes soil off the bottom of one melon to check if it’s ripe.

“The way to tell on the watermelon,” he says, fishing a knife out of the back of his small utility vehicle, “[is] if the bottom’s yellow, they’re usually ready.” He sets the small melon on a tree stump and swiftly slices it open to reveal the bright pink fruit. “I’m not sure if that’s ready or not – I’ll taste it and see.” He takes a bite. “Mmm – that’s pretty good, isn’t it?”

Diffey has some cantaloupe, too, and cucumbers and enormous zucchini that he just can’t harvest fast enough. The real draw, though, are his pumpkins, squash and gourds. He began planting pumpkins around 1991 – starting with just an acre – and now plants 8 acres on his property in Louisiana, Missouri, about 90 miles north of St. Louis.

Around mid-September, he’ll put a sign out at the end of his driveway on Highway NN to advertise his vast assortment of squash, pumpkins and gourds. Louisiana locals know where he is, though, and they come down the gravel driveway to a festive display of his red, orange, green, blue, yellow and white harvest to buy from Diffey and his wife, Debbie.

“People have different tastes,” he says of his wide variety. “It’s funny: You’ll have somebody come out here and they want the perfect pumpkin. Then you’ll get somebody else come and say, ‘I want the ugliest pumpkin you got out here.’ So you don’t know – it’s just a guess. I think your best plan is to have a lot of variety to choose from.”

“I say they named that one after me,” Diffey jokes. “I guess you’d call us hobby farmers.” He’s too humble to say so, but his operation is far from a hobby farm. People come from all over Missouri and Illinois – even as far away as Kansas City – to shop Diffey’s impressive fall crop.

Although he’s lived in rural Missouri for the past 37 years, Diffey grew up in Crestwood, Missouri, in south St. Louis County, and studied horticulture at St. Louis Community College–Meramec. He first moved to Louisiana in 1976 to work for Stark Bros. Nursery; a year later he and Debbie relocated to Forest City, Arkansas, when he accepted a system manager job at a Stark branch plant. In 1981, they returned to Louisiana, where Diffey managed spraying in field production and warehouse storage of fruit trees for Stark. That’s when he began raising pigs on the side; at one time, he had about 30 sows bearing two litters a year, which he would raise until they reached about 40 pounds.

After 25 years, though, Stark declared bankruptcy, and Diffey had to find a new gig. He spent about five years managing overnights at the local Walmart store – “just terrible,” he recalls – and jumped at the chance to return to agriculture when an acquaintance he knew from his time at Stark offered him a job at United Ag Products (now called Nutrien Ag Solutions). “Fertilizer, chemical, seed – I do all that,” Diffey says. “So I work 40, 50 hours a week, then I do this for fun, I guess.”

The fun, of course, is Diffey’s Pumpkins. Almost 30 years ago, an old friend from Stark was growing pumpkins in Marthasville, and asked the Diffeys if they wanted to help sell them and split the profits. They liked the work so much that, in addition to raising pigs at the time, they decided to grow pumpkins, too.

“We were growing the pumpkins, and I had more than I needed and I’d give them away,” Diffey says. “Whatever was left, I gave them to the pigs. As time goes by, it got to where I couldn’t make any money on the pigs. There just wasn’t any money. So I sold them all. But then you have all this equipment, the ground, and all that, and you gotta do something with it. So I started fooling with pumpkins.”

The work reminded Diffey of why he was so interested in horticulture and agriculture in the first place. At the time – the late 1980s and early 1990s – pretty much all you could find locally were regular carving pumpkins. Diffey figured he needed to find his own market, and began trying new and different varieties each year. Today, he sources some of his more interesting squash, pumpkin and gourd seeds from Baker Creek Heirloom Seeds in Mansfield, Missouri, but back then, they were much harder to find.

Many of what appear to be specialty pumpkins are technically squash varieties: Diffey’s always trying to find more interesting shapes, vibrant colors, long vines, short vines. He rattles off the playful names, listed carefully in his handwritten field book, with ease.

“That’s a new one here, called Colorado Sunrise, with the blue and pink,” he says before combing through a few more. “This is a new one called Hogarth; it’s a Rupp variety. That’s called Blue Doll; this is Crystal Star, it’s a nice white one. I don’t know if I’ve got really one favorite. I kinda like the Knuckleheads. I like the different stuff. I like this, called a Red Eye. It’s the darkest red one – they tend to crack, but isn’t that a real nice dark red? I like it. I got a lot of favorites. These little ones here, they’re kinda neat. That’s Crunchkin, see how they’ve got a real hard shell on ‘em? This is called Marengo – it’s got an orange to it that’s pretty. That’s Australian Butter, I like those. That’d be a good pie one.”

“I think it’s better,” he says. “It doesn’t taste overly processed; you get pumpkin out of the can, it can seem overly processed, mucky. If you make your own pie [from whole pumpkins] you can adjust your seasoning to what you like.”

When he started selling his crop 30 years ago, Diffey just set up a wagon with some hay bales and a few pumpkins and squash to sell. Over the past decade, though, his operation has grown to include an old Garden Mart structure repurposed from a Walmart store, poured concrete and another little covering. He added yet another tent this fall. During his busiest time – the last two weeks in October – someone from the family, be it Diffey, Debbie, their son Kyle, Kyle’s wife, Leah, or Diffey’s 91-year-old mother, Rose, is here selling pretty much every day.

After Halloween, they close the stand, but because Diffey always grows more than he can sell, fans can message Diffey’s Pumpkins on Facebook to snag the rest of the harvest in November. The rest will go to the squirrels.

Diffey even saves up his vacation time and takes about a month or so off to hand-pick things almost daily to sell. “That’s a heck of a way to spend a lot of your vacation time,” he says with a laugh. He hand-plants everything, too, with the help of Kyle and Leah, since they grow so many different types in varying sizes and vine lengths.

Although it’s technically a side gig, Diffey’s Pumpkins takes a lot of work. There are critters to keep out – electric fences to deter deer, traps for mice and voles and this summer, squirrels were “giving me heck” – plus squash bugs, aphids, weeds and weather to combat.

And weather in Missouri can be famously inconsistent, Diffey says, so irrigation is key to his operation. He uses an old 20,000-gallon fertilizer tank he bought from Stark to pump water from nearby Little Buffalo Creek into a temporary pipeline and 5 miles of drip tape that runs through the 8 acres to keep everything hydrated.

“I just don’t know if people realize how much work it is to do it,” he says. “You’ve gotta like to do it, let’s just put it that way.”

This afternoon, for example, he plans to pick about 1,000 pounds of the larger varieties and a few trays of the smaller ones for a big order headed to Chesterfield, in west St. Louis County.

“[Debbie] likes the selling part more – it’s social and stuff,” he explains. "She’s not much on growing, which makes [us] a good team. Kyle’s got two little girls; they like all this stuff, too. It’s a good family thing. It’s almost more fun with the grandkids than the kids, ‘cause you gotta spoil ‘em. Debbie does a lot of that, spoilin’ them kids. They’ve got old Grandma and Grandpa figured out.”

At Little Buffalo Creek, for example, he’s set up a swimming hole for the kids; they love to have picnics and play in the clear water.

“I’m lucky to have the creek, ‘cause I couldn’t afford the water,” he says, shaking his head. “Irrigation’s an important part of doing it. Some people can get by, but it’s just not worth the risk for me, because I depend on the crop every year. You’ll have people do it a year or two and then give it up, because it’s not worth it. It takes a real nut to stick with it as many years as I’ve been doing it.”

Even so, Diffey doesn’t see himself retiring anytime soon. After pumpkin season is finished, he’ll take a weekend and go deer hunting in mid-November. But that’s about as much downtime as he can stand.

“They call me a workaholic,” he says with a shrug. “I’m happy that I can do what I’m doing, you know? It’s a lot of work and sometimes you get discouraged, especially dealing with the weather and worrying about getting [your] crop, but I like living here and I’m lucky that I’m in good health. I feel fortunate.”

Despite the very physical nature of the work, pulling together a display of Lunch Ladys, Pranksters, Apprentices, Lil’ Pump-ke-mons and Cinderellas is worth it for Diffey.

“I get excited to see the kids in the fall get excited when they come out,” Diffey says. “[The] mom’ll pull up, and the kids’ll climb over mom just to get out and see the pumpkins.”

It's easy to make your own pumpkin-pie filling at home: Simply roast it for a smoother texture and more complex flavor than canned pumpkin. These varieties have enough flesh to make at least two pies.