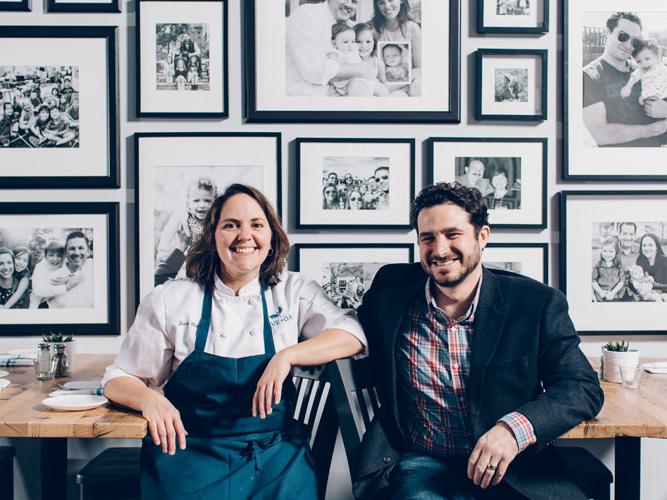 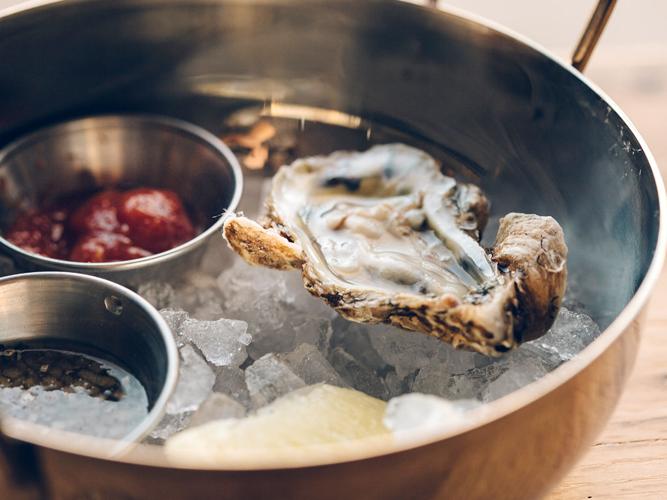 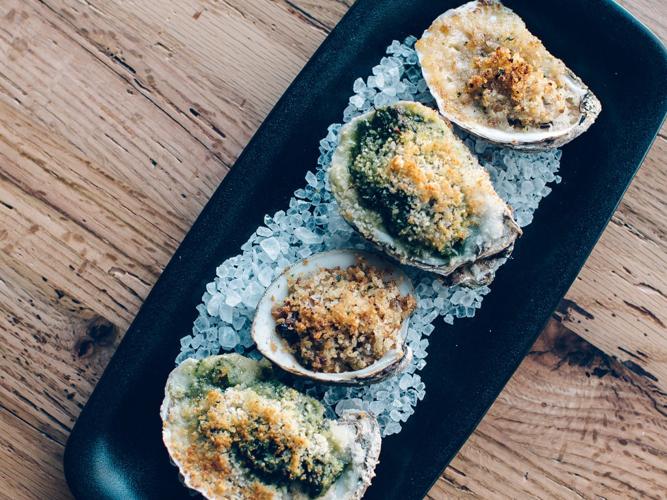 For Jesse Mendica, it all started with a bumper sticker. The bumper sticker simply read, “Do something that scares you every day.” As executive sous chef at Annie Gunn’s in Chesterfield, Missouri, for more than a decade, plus another six years spent cooking in its kitchen, the notoriously picky eater was deep into her “year of yes.” During that 12 months, she was slowly accepting that foods like mayonnaise, tartare and oysters weren’t going to kill her.

“I’m a fantastic sous chef,” Mendica says. “I was happy. I wasn’t looking for a job. I could have stayed at Annie’s until I died. I had toyed around with the idea of joining Reeds American Table – I had actually signed on with them when this opportunity came up. It’s gotta be the right reason to leave a perfect situation like that. But I was absolutely terrified.”

The opportunity was Olive + Oak, and that uncertainty was shared by its proprietor, Mark Hinkle, who, along with Greg Ortyl and their wives, opened the Webster Groves, Missouri, spot in January. Hinkle and Ortyl were initially introduced through tragedy: Hinkle’s young son, Oliver, and Ortyl’s young son, Oakes, both passed away due to congenital heart defects. The men first met through The Children’s Heart Foundation and each eventually founded their own organizations to fund research for the birth defect, the Ollie Hinkle Heart Foundation and the Mighty Oakes Heart Foundation. The restaurant’s name serves as an enduring tribute to their children.

Hinkle is a first-time restaurant owner; he was general manager of Annie Gunn’s for five years, which is where he met Mendica. He dreamed of opening his own restaurant for years, and the pieces finally started coming together; he found the charming 2,500-square-foot-space and began growing closer with Ortyl as a business partner and friend. From the beginning, Hinkle knew Mendica was a crucial piece to his stepping away from Annie Gunn’s.

“I said many times I wasn’t going to leave unless I opened my own place, and I told Jesse I didn’t want to do this with someone else,” Hinkle says.

Hinkle says that Mendica is a “damn good executive chef,” even though she says she was scared to admit it, even to herself. With a self-described classic style of cooking, she made a name for herself as a team leader and as Annie Gunn’s “fish girl,” in addition to churning out consistent-quality steaks and rustic, hearty plates under the restaurant’s venerable executive chef Lou Rook III. Drawing from her experience, the menu at Olive + Oak represents seafood well, including standout oysters prepared in the half-shell, baked, Rockefeller and more, and whole fish cooked in a salt crust. Olive + Oak serves steaks, of course, but sous chef Kevin Pellegrino, also an alum of Annie Gunn’s and most recently Five Bistro, makes a mean lamb ragout and lamb gnocchi, with meat sourced from Jenna Pohl of Midwest Lamb and Todd Gesiert Farms. Mendica is excited to explore lighter fare and vegan dishes at Olive + Oak, as well.

“All the food is recognizable, but we’ll take this fanatically obsessive approach to getting the product to be perfect when it goes out,” Hinkle says. The team tested a dozen different french fry recipes, undertook a meticulous research process for the egg yolk that tops the tartare and scientifically approached searing its burger to keep the juices in. “Mark calls it scientific,” Mendica laughs, “but I just call it cooking.”

In addition to his scientific-meets-classic approach to food, Hinkle’s time spent working the floor at Annie Gunn’s made him into a bit of a oenophile – he’s offering nearly 200 wines at Olive + Oak, ranging from affordable, fun options to “big, bad California reds,” all housed in the restaurant’s custom-built, see-through wine storage rack near its open kitchen.

Wines are supplemented by the outstanding housemade cocktails developed by Chelsea Little, previously a bartender at The Libertine, and eight beer taps (almost all of them local) flow from behind the ornate copper-front, white quartz-topped bar.

“You should feel comfortable, and that’s what we’re going for at Olive + Oak,” Hinkle says. “It’s not holding your ankles above my head and shaking you for every penny you’re worth; it’s a warm welcome, whether you’re spending $10 or $80, whether it’s your first time in or your hundredth, whether you’re ordering the safest thing on the menu or the most adventurous.”

To be sure, the opening of Olive + Oak was an adventure, as chronicled in the wall of photos in the back of the space depicting historic Webster Groves, the staff and their families and friends who helped the restaurant come to be – but hopefully there are still many frames to be filled.

“We’re trying to build the community, build regulars, from anywhere, who feel loyalty to Olive + Oak,” Mendica says. “It’s not always geographic – it’s the community of people who call it their own. Team and family are the two strongest words that describe what Olive + Oak is about.”