Read Today's E-Edition
Share This
In Lawrence, Wakarusa Valley Farm Cultivates a Variety of Wild Mushrooms
Share this
1 of 12 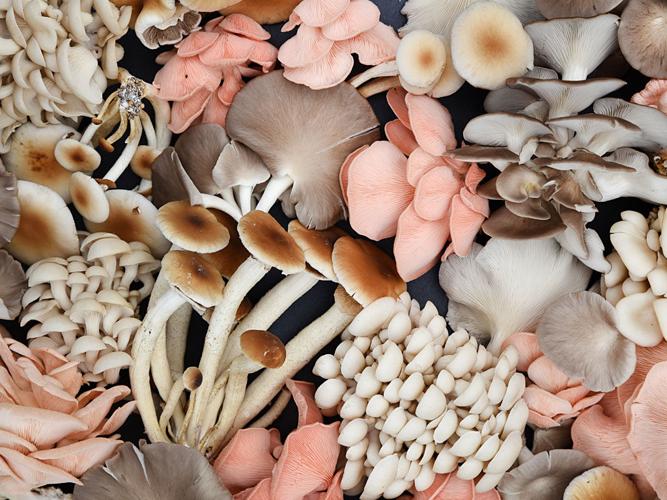 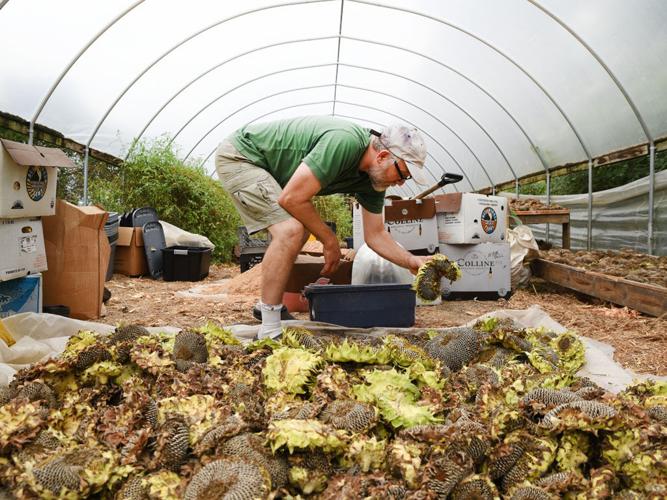 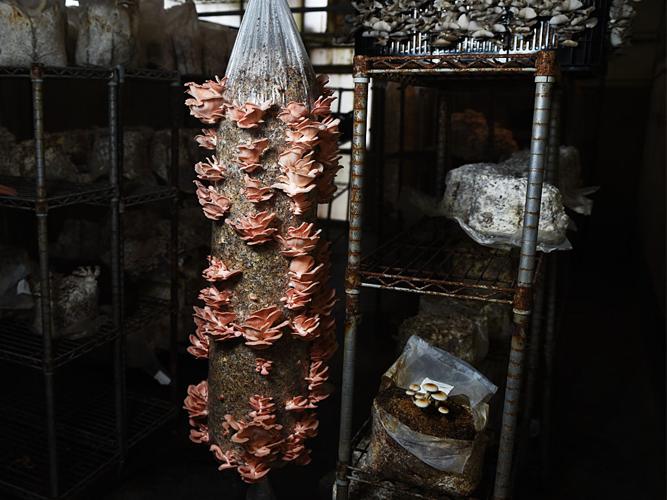 All of Lumpe's mushrooms, minus shiitake, are cultured by Lumpe. 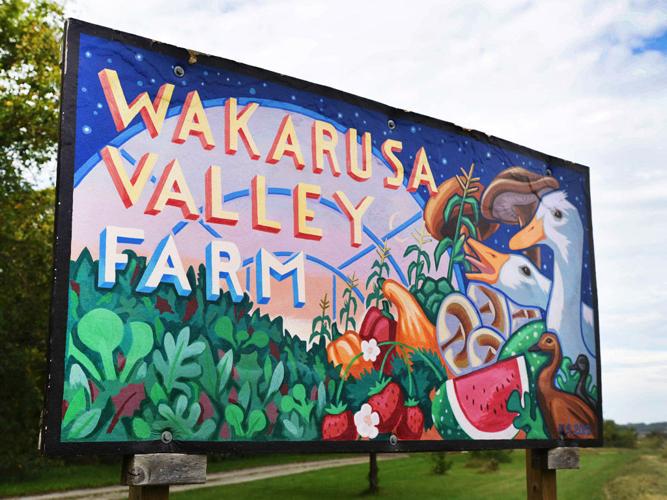 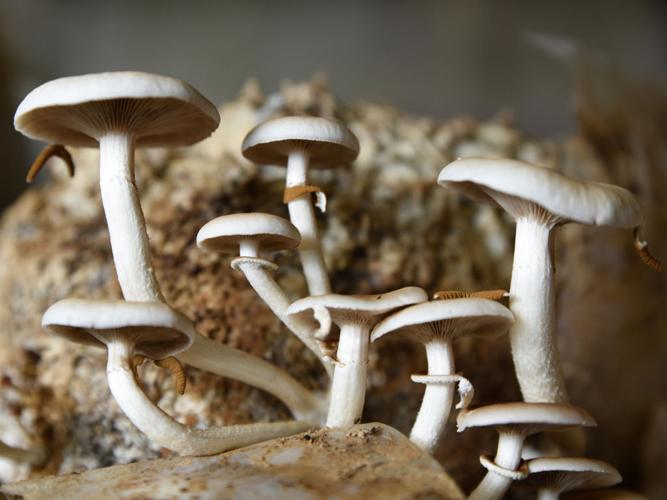 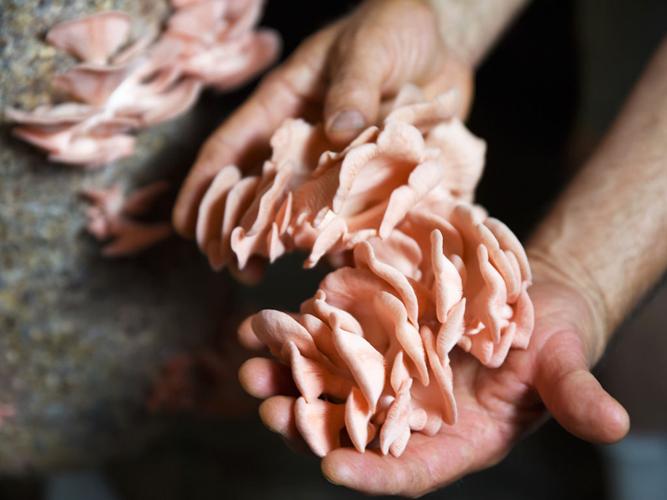 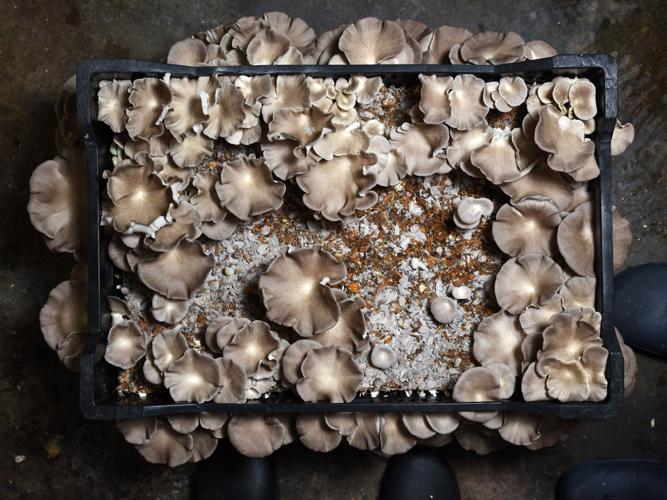 Wakarusa sources mushrooms to Kansas City restaurants including Novel, The Rieger and Room 39. 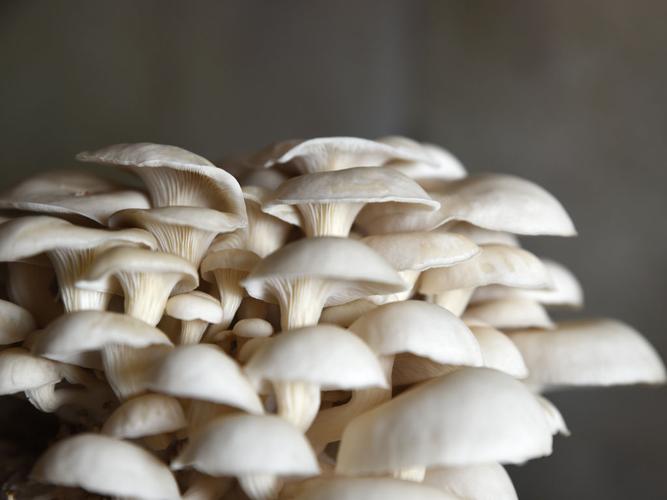 Lumpe has been able to grow so many varieties of mushrooms because his research didn’t stop with fungi. 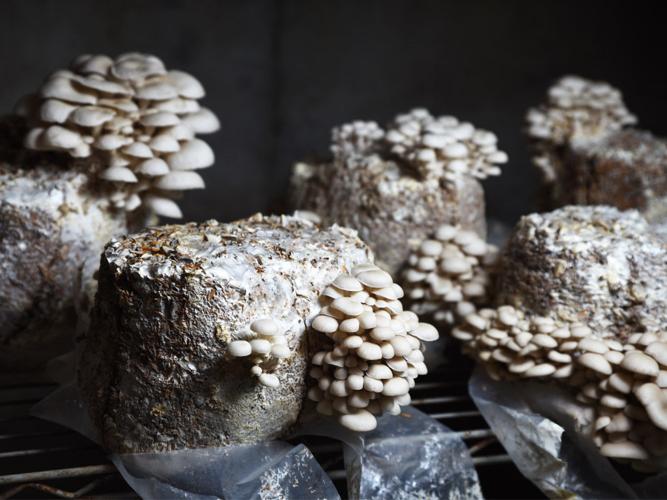 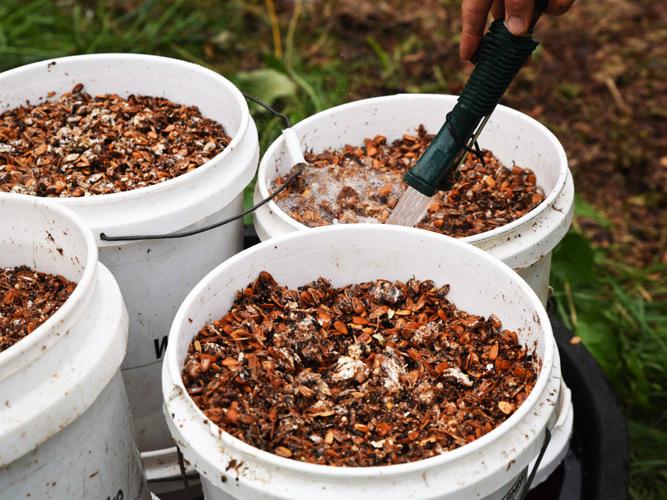 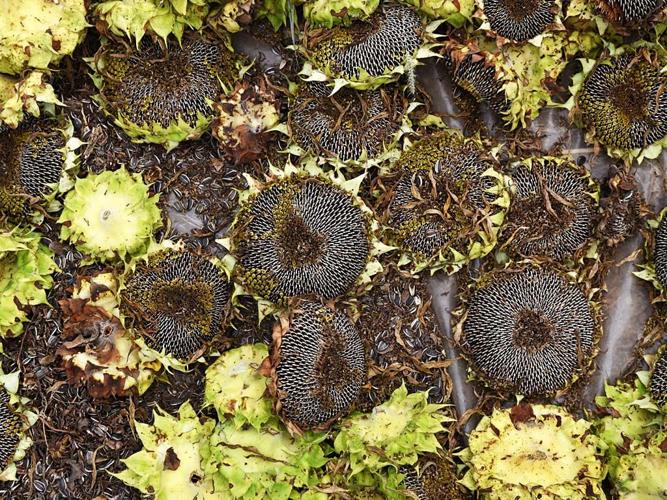 Lumpe has spent the past two years testing the growing properties of sunflowers and red corn. 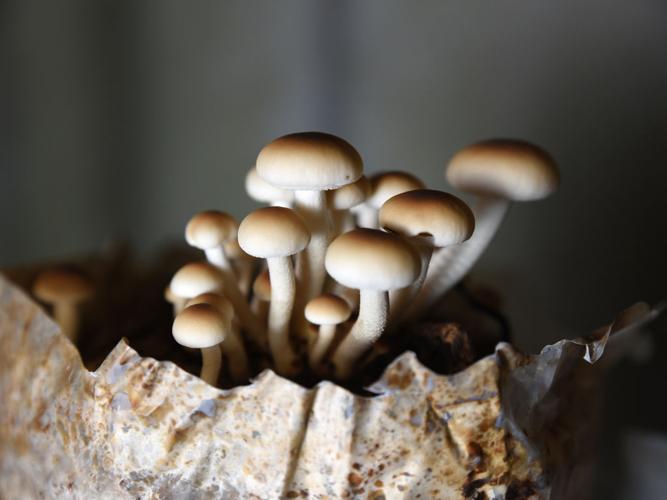 Mark Lumpe scoops his hands into a mass of bright pink oyster mushrooms the color of Disney princess cupcakes.

He gently lifts a handful out of a Sterilite tub to fill an open paper bag. The scale settles at just over 2 pounds. He’s learned to hit the mark over hundreds of Tuesdays just like this one in the commercial kitchen at Wakarusa Valley Farm in Lawrence, Kansas.

The paper bags of harvested mushrooms are destined for Kansas City restaurants: Novel, The Rieger, Room 39 and more. They’ll be dropped off shortly before plastic bags holding the next mushroom crop grown on substrate (wood chips, sunflower seed shells and shredded red corn, each of Lumpe’s own design) are brought to the farm’s newest grow site – a 2,000-square-foot space in an underground limestone cave 10 minutes outside of Downtown Kansas City.

“I keep reinventing myself,” Lumpe says, his hands pausing the sorting process to twirl in half-circles. “And I’ll never be just a vegetable grower again. It’s too frustrating to be at the mercy of the weather.”

His lab is a few feet away from the stainless steel table where he’s sorting. Behind a door and an air filter is where spawn is cultivated – one of the heartbeats of his unusual mushroom-growing operation. The spawn holds mycelium – the vegetative wispy thin branches that will become mushrooms – and provides nutrients during the early stages of growth. Wakarusa Valley Farm has 14 different varieties of mushrooms, all of which – with the exception of shiitake – are cultured by Lumpe.

“It just seemed like destiny,” he says. “I knew I would love to work with microorganisms on the farm.”

Not many people with a degree in cell biology grow up to be farmers, but back in 1982, Lumpe was set to graduate from The University of Kansas (KU), and the idea of country living appealed to him. He persuaded a good friend and area landowner to sell him a few dozen acres of land to split with two other friends.

“The plan was to open a berry farm, but farming never goes exactly according to plan,” Lumpe says.

The farm was certified organic two years after Lumpe bought the property in 1987. It was another five years before he began selling vegetables at the Lawrence Farmers’ Market and via a subscription service. There have been raspberries and potatoes and garlic and salad greens and watermelon and strawberries. Stockbrokers and farmers know diversity is best in the long run. That’s why Lumpe has worked for the past 34 years as a medical technologist at KU’s Watkins Health Services, as well.

The greens and garlic remain, as does a small patch of strawberries and tomatoes a few hundred yards from a compost pile that is regularly fed with the used blocks of mushroom substrate (any material where mycelium – those precursors to mushrooms – can grow). It’s mushrooms that have given Wakarusa Valley Farm its identity, though, and Lumpe has spent the past decade relentlessly striving to create a sustainable mushroom-growing program.

“Who wouldn’t want to be indoors in the summer?” Lumpe says. “The weather is hot and dry. That’s why people aren’t growing in Kansas outside. Mushrooms need things to be humid and temperate.”

When he was first starting out as a young farmer, he often relied on older, more experienced growers to learn about the local soil and seasons, but he had trouble finding the same kind of advice about fungi when he began researching it a decade ago. His wife, Julie Waters, a research librarian at KU, suggested he look for chat rooms or forums where mushroom growers might gather.

“They were all defunct,” he says. “People don’t sit around talking about how they grow mushrooms; it’s a secret. But it’s the same as any kind of farming. You have to keep repeating what you’re doing, even if you might not know exactly why it’s working.”

The original grow room – which is just off the front hallway attached to the commercial kitchen – has since expanded to three separate locations on the farm. The two additional spaces have attached greenhouses, where vegetables in beds thrive on the carbon dioxide-rich environment and heat given off by the mushrooms. The underground limestone cave 10 minutes from Downtown is equal in size to all three grow rooms combined. In the cave, Lumpe can grow three varieties year-round: shiitake, buna shimeji and nameko.

In the fall, he grows oyster, shiitake and buna shimeji mushrooms on the farm. Oysters, a mild fungi, run the color spectrum from dove gray (a pewter that is nearly blue) to pink and cook down significantly. They can be used as a dish accent as easily as a main component. Wakarusa Valley’s Italian oysters are large and flat, making them perfect for grilling.

The shiitakes have an intense, strong, earthy flavor; Lumpe compares them to beer styles. “People who don’t like beer, you might give them a Pilsner,” he says. “But [shiitakes] are the bold IPAs.” The buna shimeji have a crunchy, firm texture and a flavor that is spicy and almost floral, rather than the deep forest and earth notes of the shiitake.

Lumpe believes in diversity for both edible and economic reasons, and he also knows that having a variety of mushrooms for a variety of palates helps him be a better fungi advocate.

“You probably know somebody who hates mushrooms, but shimeji is like meat to vegetarians,” he says. “There are three categories: people who love them and always seek them out and other people who could be introduced to them. Then there are the people who are really phobic – my wife is one. If I’m picking mushrooms and say, ‘Let’s hug,’ she says, ‘I can smell those mushrooms on your fingers.’”

That dedication to diversity has endeared Lumpe to chefs and regulars at farmers’ markets. For the past several years, Lumpe has sold his mushrooms at Badseed farmers’ market in Kansas City’s Crossroads Arts District. This spring, Brooke Salvaggio, who runs Badseed with her husband, Dan Heryer, sold Wakarusa’s mushrooms on his behalf.

“It’s not only the quality of the mushrooms that impresses me so much, but also the seasonal variety,” Salvaggio says. She tosses Wakarusa mushrooms in breakfast burritos and uses her favorite variety, pink oysters, to make a vegetarian version of clam chowder. “The depth of flavor and personality among the mushroom varieties are remarkable – a cook’s dream,” Salvaggio says. “They can be added to almost any dish to make the ordinary something extraordinary.”

Lumpe has been able to grow so many varieties of mushrooms because his research didn’t stop with fungi. Just as the fertile soil in the Wakarusa River valley has sustained farmers for generations, Lumpe is searching for the ideal material for the substrate to sustain his mushrooms.

“The biggest problem with growing mushrooms is finding substrate,” Lumpe says. “Where do you find wood chips the size of your fingernail and perfectly shaped? You have to make them yourself.”

Over the past 11 years, he’s rented a wood chipper and processed elm and box elder trees on his property. The chips are then mixed with sawdust from Missouri mills – he’s been through four suppliers in an effort to find a consistently coarse product.

Lumpe walks through the tall grass behind the farmhouse, greeting the three geese that patrol the grounds, which he believes brings good luck. He stops at the first structure, a hoop house where sunflower heads are drying out on beds. Each has been picked by hand. The heads, husks and shells will be scraped from the stalk and then chipped or shredded.

He has spent the past two years testing the growing properties of sunflowers and red corn. The corn is easier to process (like the sunflower heads, the cobs are chipped or shredded) and has more applications – like with an on-site mill to make masa for tamales – but the sunflowers are easier to grow.

The milled material is wetted and left to soak in black tubs or 5-gallon white buckets. Lumpe adds millet, wheat bran and gypsum to balance the pH and provide nutrients. When he needs material to grow mushrooms, he scoops the top layer off a few buckets each morning – gravity having provided the right amount of drainage – before heading over to the KU campus for his shift at the health center lab.

“It can’t be too dry because then the spawn can’t grow throughout the block, and it can’t be too wet because that encourages competing bacteria,” Lumpe says. “It’s the unseen that drives you crazy. For every mushroom problem, there are probably 10 different reasons. My goal is to find the right thing, no matter what.”

A few yards past a loose semicircle of soaking substrate, he slips off his rubber boots and steps inside the building that houses the second grow room. It’s here that he’s experimented with growing PoHu oysters on sunflower shells and golden oysters on wood.

The first stop is a massive 32-inch-by-12-foot-long pressurized chamber, the autoclave, which was last used in a baby food factory but now sterilizes the roughly 5-pound plastic bags filled with substrate. The goal is to eliminate any organism that might compete with the mycelium. In 2012, it was 130 bags a week. Now, Lumpe processes 300 bags weekly.

After bags are sterilized, they’re inoculated with spawn. The bags are then stacked on shelves in an incubation room that’s kept between 70°F and 80°F to help kick-start the first phase of growth.

Lumpe does a spot check of the incubation room and then steps through a small hallway into the grow room. Bags of substrate are brought here after a few days or weeks in the incubation room. He peeks inside a few bags, which are starting to puff up with heat and moisture. White dots indicate pinning – a sign that the mushrooms are beginning to fruit. He makes a quick pull and tear to the bag as his eyes flick through the substrate looking for growth of all kinds.

“When bags start to pop open, you’ve got to let them out a bit,” Lumpe says. “That’s the art of this. Everybody does it a little bit differently.”

A new crop of mushrooms can grow in as little as a few days, depending on the temperature and humidity. In the heat of summer, oyster mushrooms will need to be harvested as often as twice a day and yield as much as 1 pound per bag over the course of its lifetime.

After harvesting, Lumpe documents the results of a given substrate, deposits the used organic material in his compost pile and brings the mushrooms to the farm’s kitchen, where they’ll be packed up for market, made into tamales or sent out for restaurant deliveries.

“It’s always interesting to see what chefs do with the mushrooms,” Lumpe says. “And that’s one more person that might like them now.”

Jonathan Bender is the founder of The Recommended Daily.

Dried mushrooms take center stage in this recipe for a creamy sauce or soup.

Local mushrooms give this traditional French spread an earthy flavor.

This is the base for a signature dish at Kansas City's Novel.

All of Lumpe's mushrooms, minus shiitake, are cultured by Lumpe.

Wakarusa sources mushrooms to Kansas City restaurants including Novel, The Rieger and Room 39.

Lumpe has been able to grow so many varieties of mushrooms because his research didn’t stop with fungi.

Lumpe has spent the past two years testing the growing properties of sunflowers and red corn.