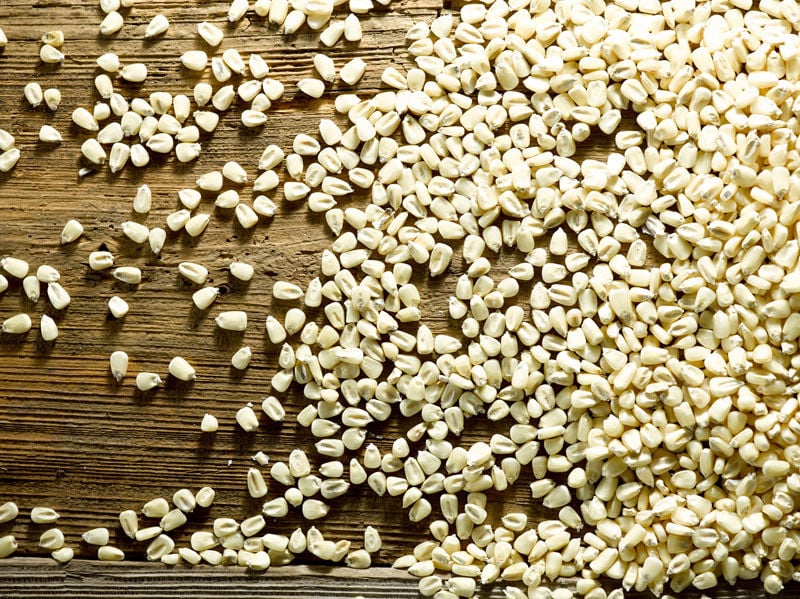 Fresh masa is made from corn that is soaked in lime and mashed. 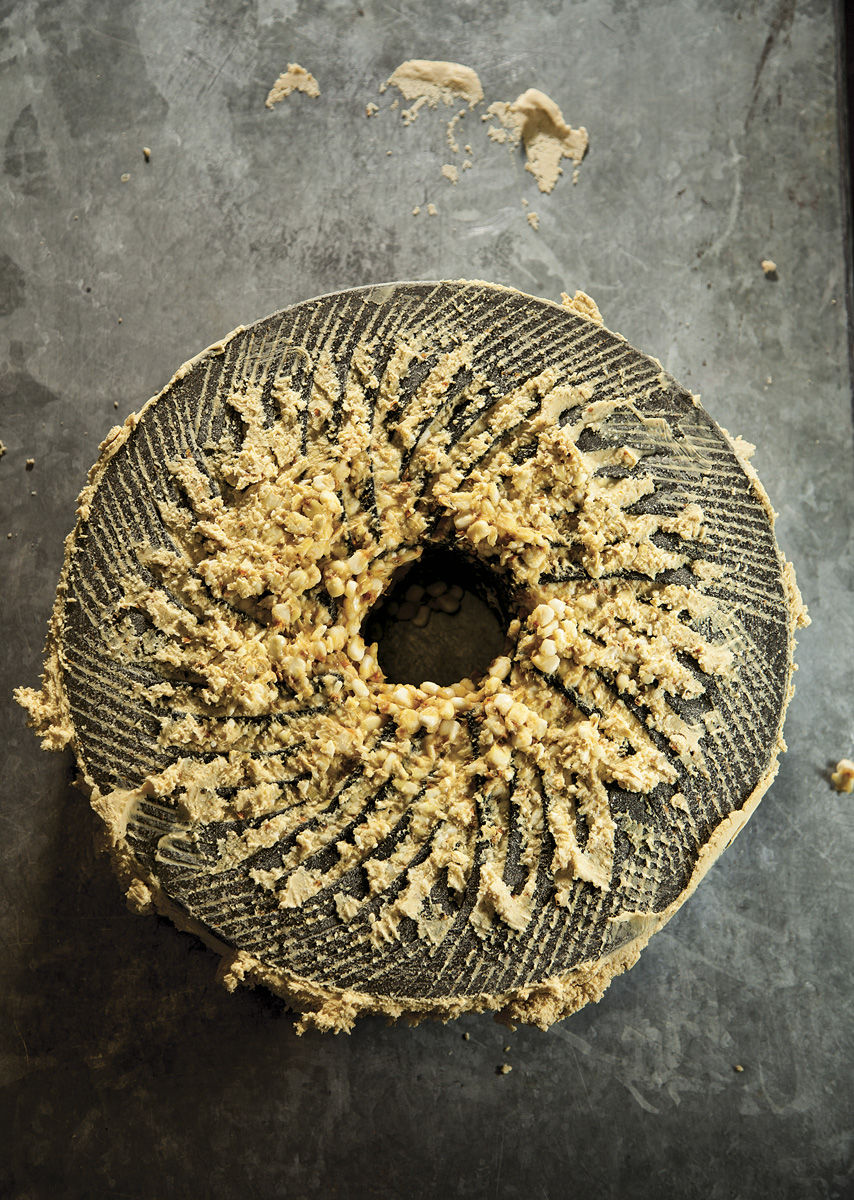 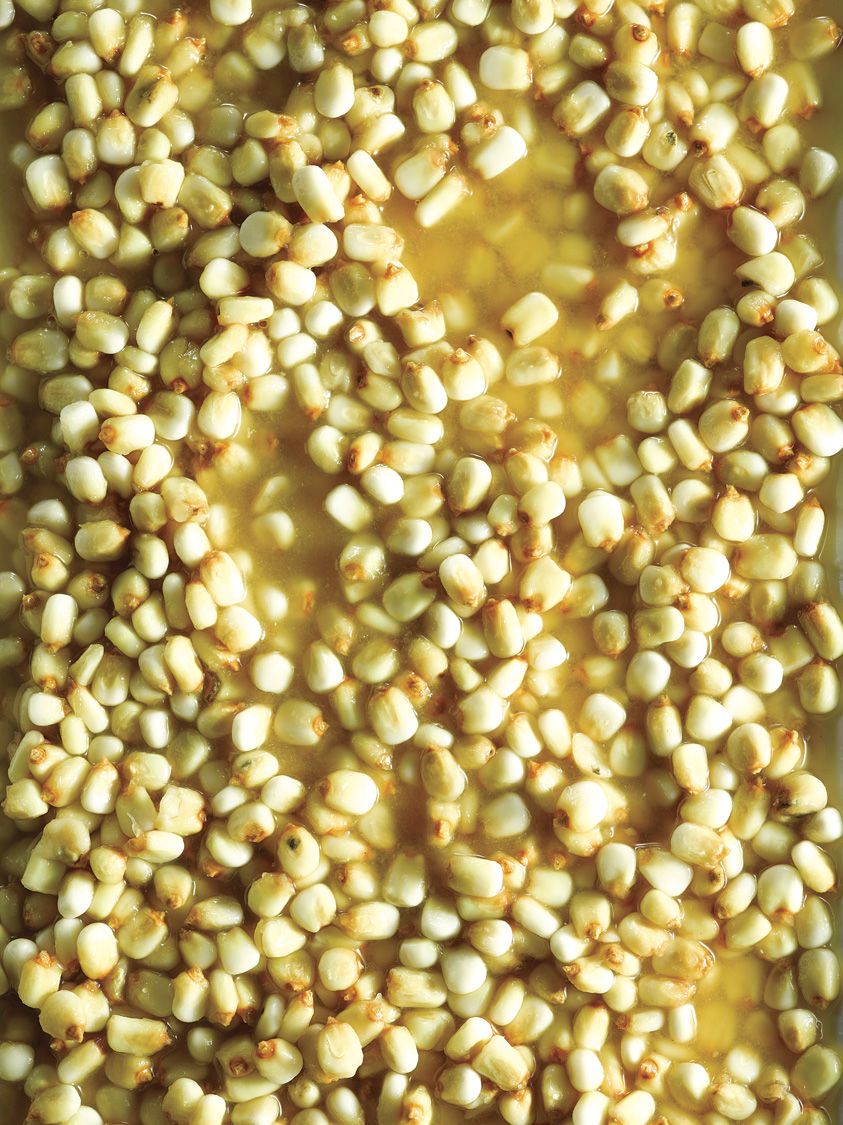 Corn that has swelled after soaking in lime. 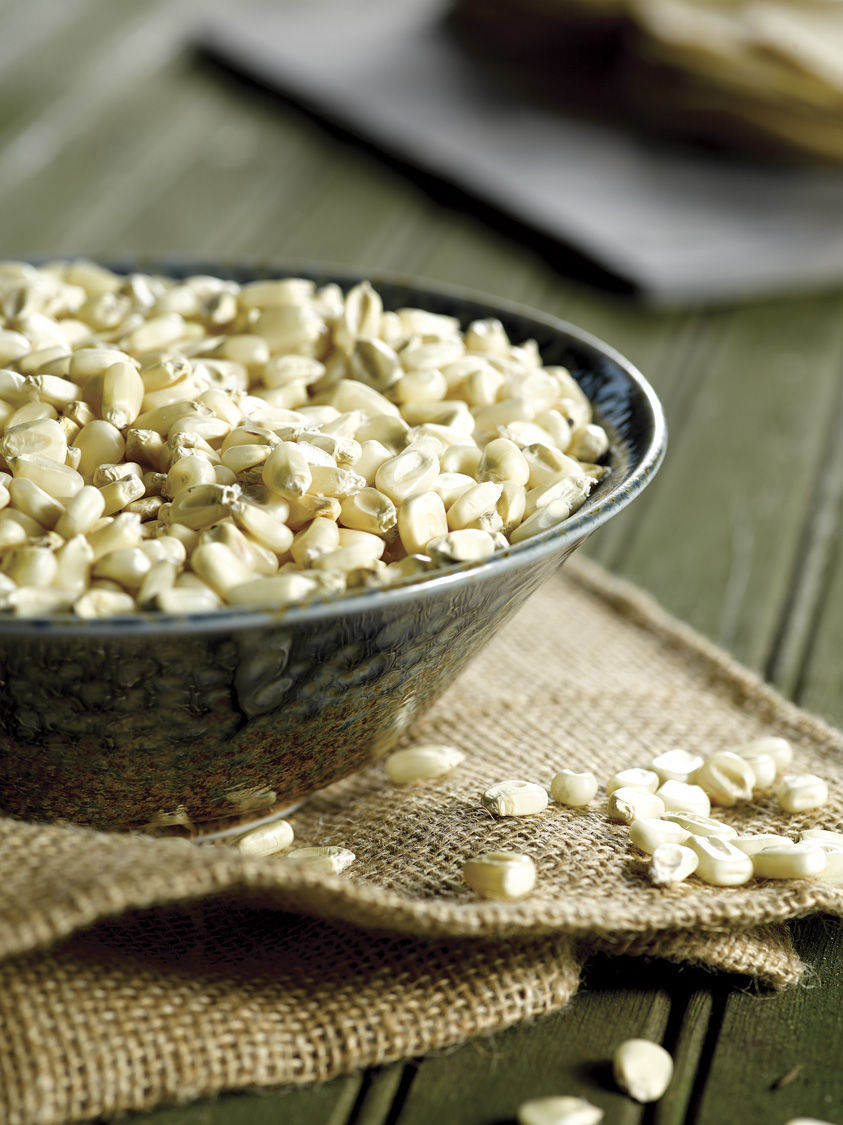 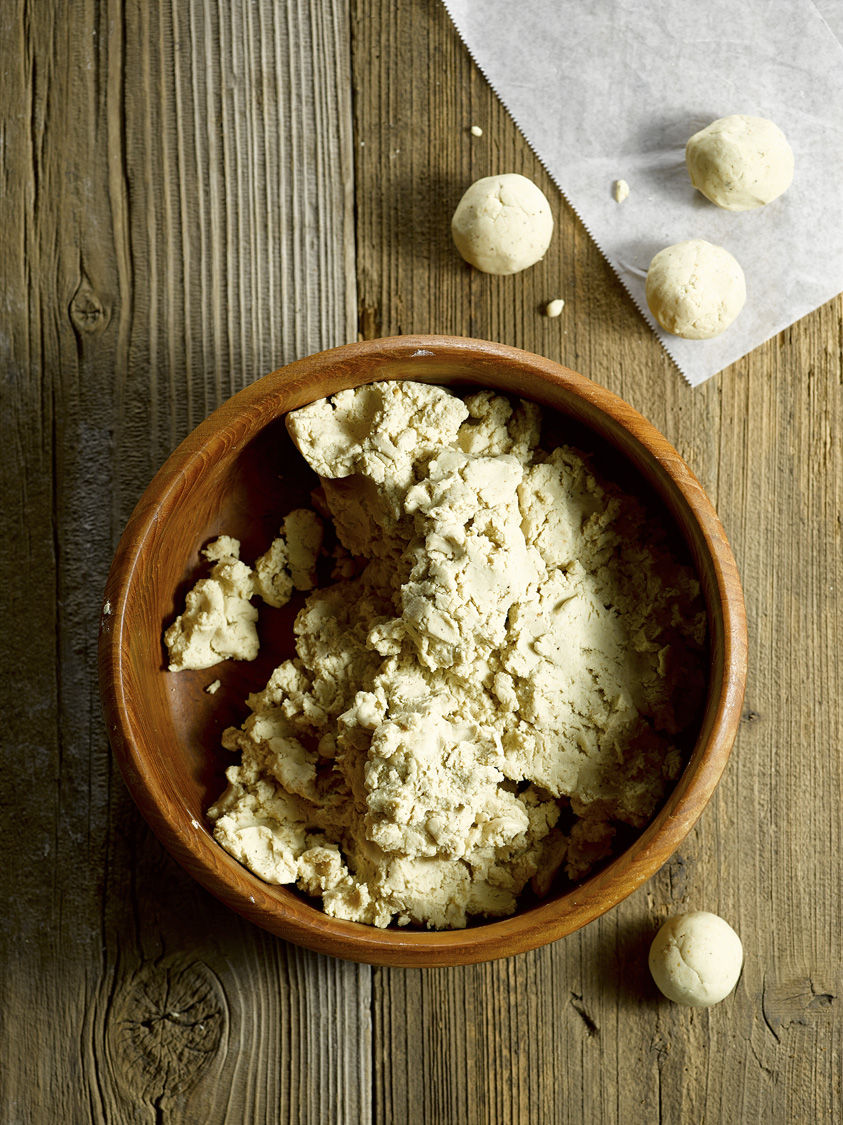 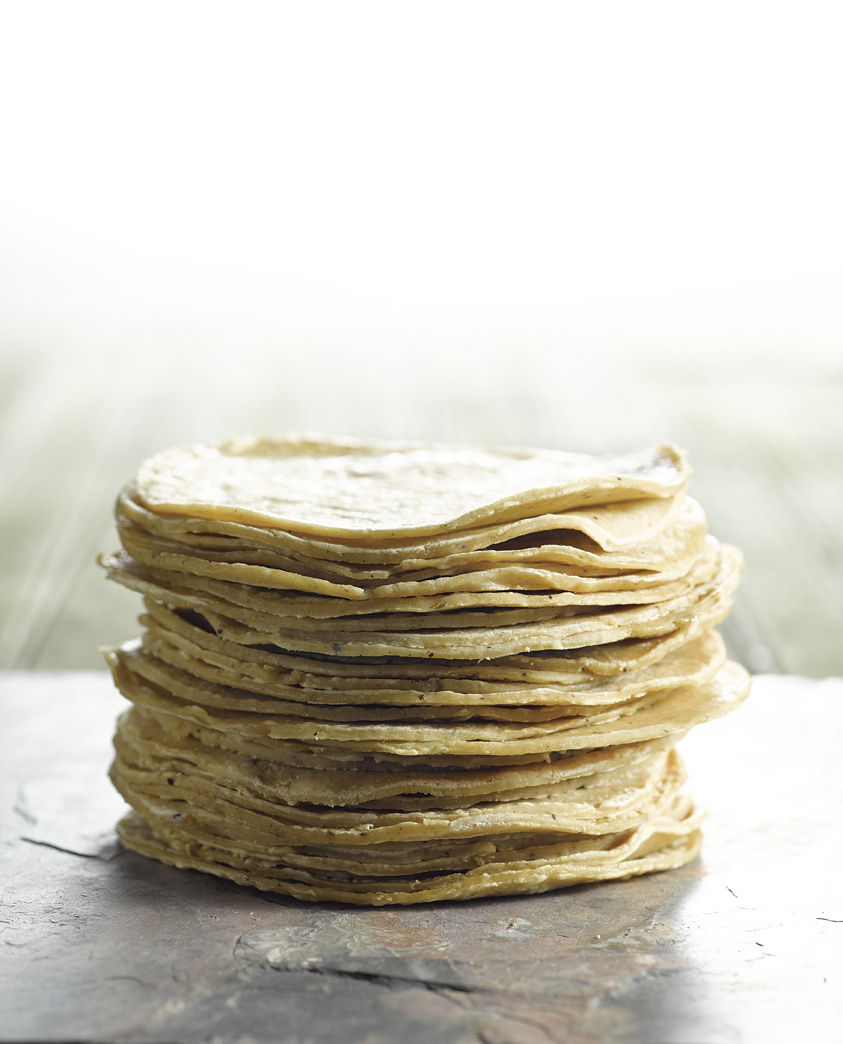 Tortillas made from masa.

Fresh masa is made from corn that is soaked in lime and mashed.

Corn that has swelled after soaking in lime.

Tortillas made from masa.

Beige bags filled with white corn are stacked in a corner of the Tilford Restaurant Group (TRG) kitchen in The Hill neighborhood of St. Louis. They are piled 5 feet high, 10 feet across and 3 feet deep. This is where, three days a week, Peter Schweiss, the TRG’s culinary operations manager and masa maker, and DeVonte Shivers, the assistant manager, make masa, a dough for tortillas, tamales and other Mexican foods.

They load 300 pounds of corn with water and food-grade lime (or calcium hydroxide) into an enormous, rolling kettle, which looks like a huge metal box without a lid. They put it under a giant hood, connect the gas line and light the rows of burners underneath it. In about 30 minutes, when the mixture reaches the desired temperature, Schweiss turns the heat off and leaves the corn to steep overnight.

When the two arrive the next day, the corn has swollen 50 percent larger, and the indigestible outside yellowish hull has melted off each kernel. Shivers rolls the kettle over to a washer that spins the corn up into a chute before it is sprayed down to remove the hulls. Schweiss and Shivers are careful to remove just the right amount of hull as the corn moves up the chute and out into the grinder.

“The yellow hull does two things,” explains Jason Tilford, executive chef and co-founder of TRG. “It acts as a natural binder for the tortilla. It’s gummy. And it gives it the corn color. The more [hulls] we take off, the whiter the masa will be. We like a little bit of yellow.”

Once the corn is in the grinder, the magic of making masa begins. Two specially designed volcanic stones grind the corn into dough. Each stone looks like a wheel from Fred Flintstone’s car: 6 inches deep and black, with grooves cut into its surface. The grooves begin large at the center and, as they reach the edge, slowly become smaller. The changing size of the grooves is what grinds the corn precisely to become the right consistency for masa.

Schweiss calculates that the process yields between 400 and 450 pounds of masa, which he loads into 9-pound tubs ready to deliver to TRG’s restaurants. “At about 1½ ounces of masa per tortilla, we get about 80 tortillas per bucket, give or take,” Schweiss says.

At Tortillaria Mexican Kitchen, orders of cheese enfrijoladas are served with tortillas made of the company’s masa. The tortillas are wrapped loosely around Monterey Jack cheese and then baked in black bean sauce, fresh cilantro and a drizzle of sour cream. If you pierce the tortilla with your fork and eat a cheesy bite, you’ll immediately notice the difference between these tortillas and the ones you buy at the market: Soft, thick and chewy, they taste like fresh corn.

Tortillas like this can only be found at four restaurants in the St. Louis area. Brothers Jason and Adam Tilford, co-founders of TRG, own Tortillaria, Milagro Modern Mexican and two Mission Taco Joint locations.

For years, their restaurants have been extremely popular, but the Tilfords weren’t satisfied only with success. They wanted to make the best Mexican food in the Midwest, and there was one problem keeping them up at night: They believed their tortillas could be better.

The brothers knew the best tortillas are made with masa. Years ago they tried buying fresh masa from Chicago, but it would spoil before it arrived in St. Louis. So they made their tortillas with Maseca, a corn flour that chefs mix with water to make tortilla dough. “For years, Maseca was all you could get in St. Louis,” Adam says.

The tortillas were good, but drier than those made with real masa. And they kept breaking in half. “The birria [taco] was one we had a problem with,” Schweiss says. “It’s one of our beef tacos. It would just split.”

“Maseca yielded a drier product,” Jason says. “It doesn’t have the natural gumminess that masa has. That’s why when you get tacos at a taco stand, they give you two tortillas. The first one soaks up all the stuff, and the second one holds it together.”

Maseca isn’t a bad product; it is, after all, “one step above what you can buy in a grocery store,” according to Adam. But fresh-ground masa is best for flavor. “A tortilla made with Maseca is going be better than store-bought, but this is the next level,” Adam says. “These are just corn, lime and water. They just taste like corn.”

Jason says that using masa also solved the other problem: “They never break. We can just use one tortilla [to] highlight the flavors of the fillings. We can also adjust the thickness of the tortilla. There are a lot of variables we can adjust to create tortillas just how we like them.”

Adam and Jason met with masa experts, traveled to Chicago to tour a masa kitchen and then purchased a building in St. Louis. They also partnered with Rovey Seed in Farmersville, Illinois, for fresh corn. After months of preparation, production got underway this past June, and the Tilfords began making masa to take their tortillas to the next level.

The TRG kitchen provides the Tilfords with a better product and supports local food production. But it’s also a labor of love for the brothers. “Right now, this is being supported by the restaurants,” Adam says. “It’s costing us a lot more to do this instead of Maseca. Slow food is definitely not cheap.”

Plans are in the works to increase the kitchen’s bottom line by producing other staple ingredients for their restaurants, including tamale masa and made-from-scratch bread. In the corner of the kitchen sits a small stack of bags full of blue corn for tamale masa. “It’s two types of masa that we’re making,” Adam explains. “And there is more of a market in St. Louis for the tamale masa, for us to distribute that to other people because you don’t need special equipment [to make tamales]. What you can get now is powdered or frozen from Chicago.”

He continues: “We bought a lime juicer; we’re juicing our own limes. At each restaurant, [employees] were spending two to three hours a day juicing limes with a little hand-juicer. Now, Pete [Schweiss] juices them with the juicer and distributes fresh lime juice to the restaurants each day. And in doing that, we’re buying pallets of limes at a time and getting them at a much reduced cost. So we’re trying to use [the kitchen] for other things for cost-cutting.”

The brothers will also expand what the kitchen produces. “Every day there’s a new idea of something we can do,” Jason continues. “We’ve talked about salsas, hot sauces and chorizo sausage. We make homemade chorizo in all the restaurants. The goal is to bring all the things we make in the restaurants here. We started making churro batter here now.”

“You do a taco rub…” Adam adds, trailing off as both brothers pause to think about the expanding list of ingredients they will begin producing at the TRG kitchen.

The Tilfords are currently designing a food truck that they plan to open in the near future, and their restaurants are frequently vendors at area festivals, so eats for the truck and events will be prepared in the kitchen as well. “This is really centrally located for Soulard, Delmar, Webster Groves and the Central West End; it’s the perfect spot,” Jason says.

The brothers are also committed to figuring out a way to sell their masa. “This time next year, we’ll probably either be doing tortillas [for other restaurants] or have exhausted an attempt to do tortillas. There’s a demand for tortillas. We use masa for our restaurants because we have tortilla-pressing machines. A guy like Josh Galliano [chef at The Libertine] doesn’t have a tortilla-pressing machine. Other people have inquired and said they would love to buy tortillas from us. They don’t want the masa; they want the tortillas. If we got that going, we’d be in restaurants and farmers markets.”

Building on the Foundation

The foundation of good food is quality ingredients, Jason says: “It all starts with the chef’s concept of good food in, good food out. Start with quality food instead of buying low -quality food and trying to make it taste good.”

Tortillas are a foundational part of Mexican cuisine, and the Tilfords have already made the tortillas in their restaurants the best they can be. If their tortillas end up in other restaurants and markets, the brothers will be contributing to a better foundation and increased quality in restaurants across the region. Adam says he’s watched the local food scene explode in the past decade, and he and his brother just want to do their part. They’re just getting started.

Shannon Cothran travels the country imbibing in theatre and food.