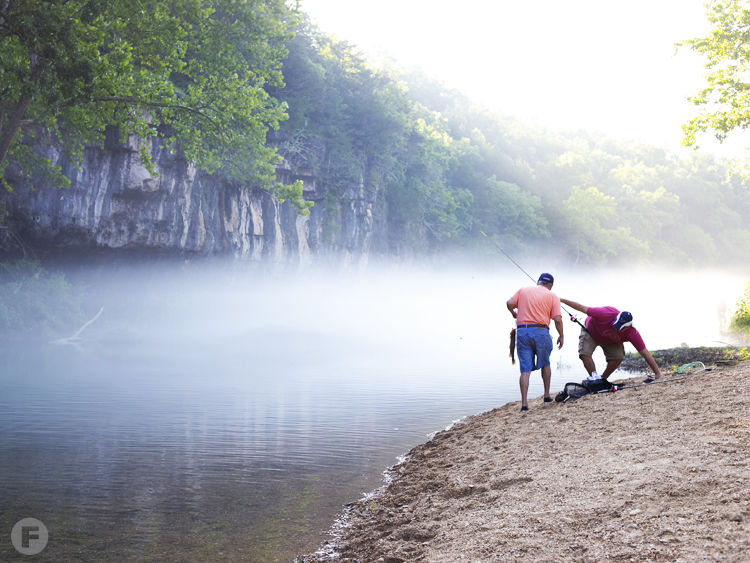 The property includes both catch-and-release and catch-and-keep fishing areas. 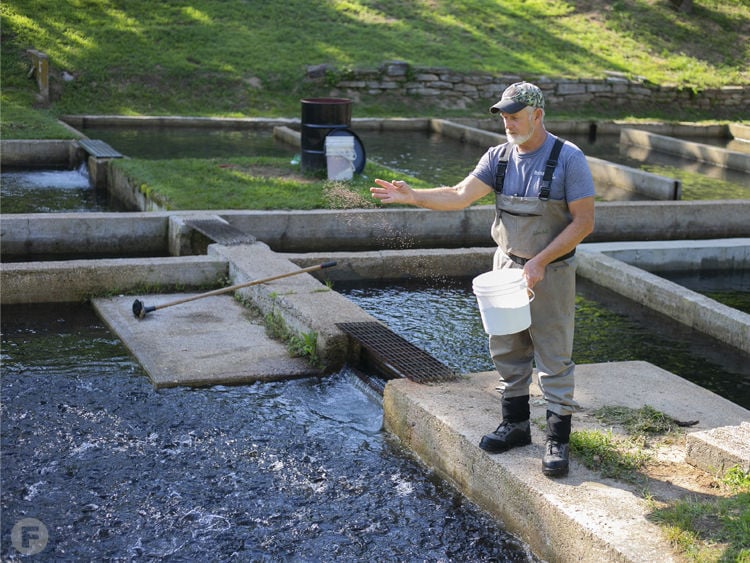 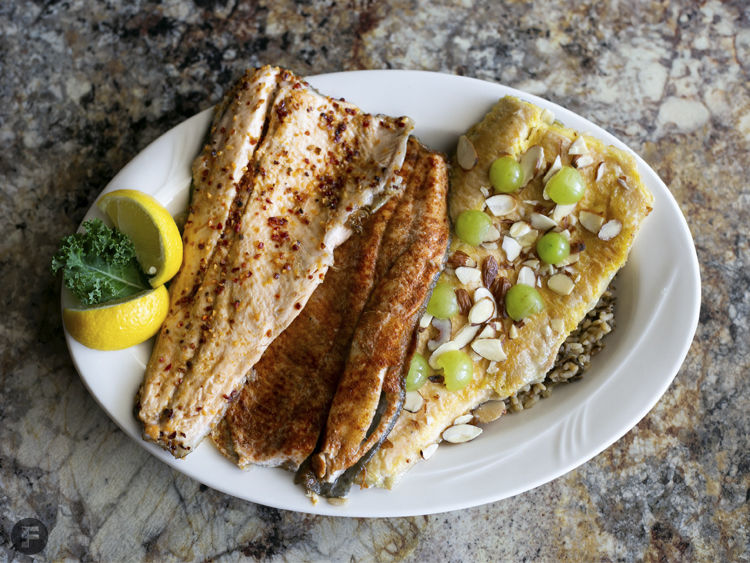 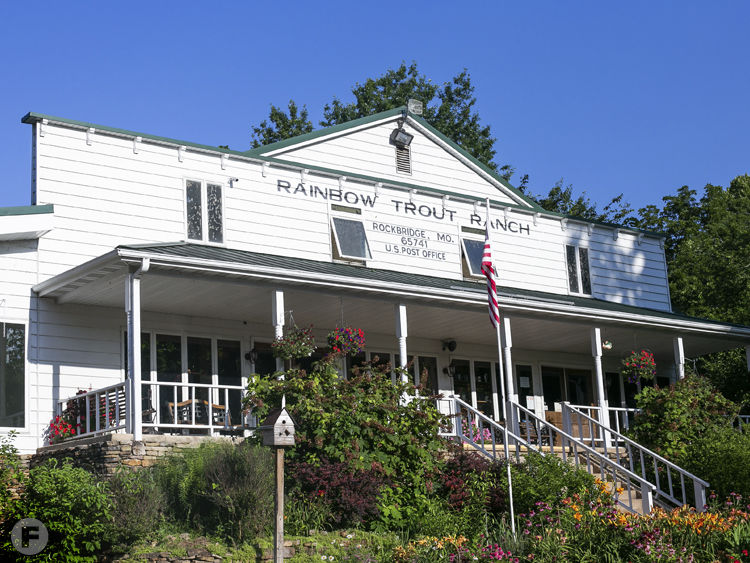 Rainbow Trout & Game Ranch is a 2,000-plus acre resort in the Ozarks about 25 miles from the Missouri-Arkansas border. 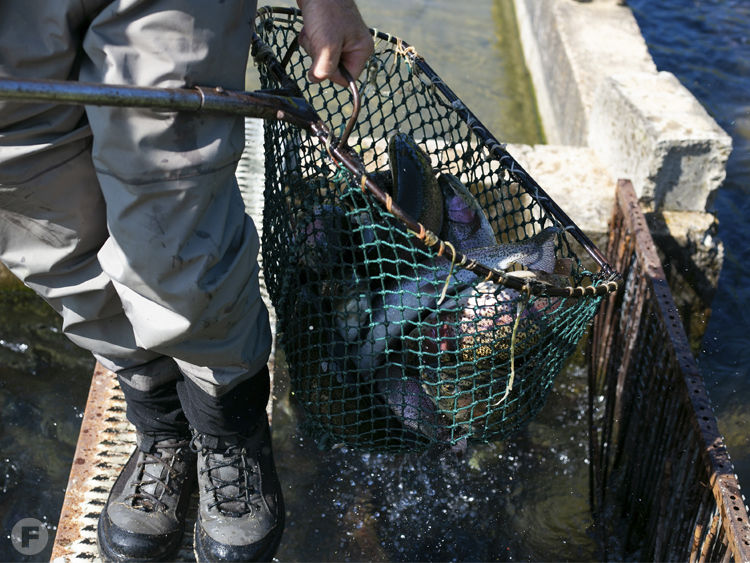 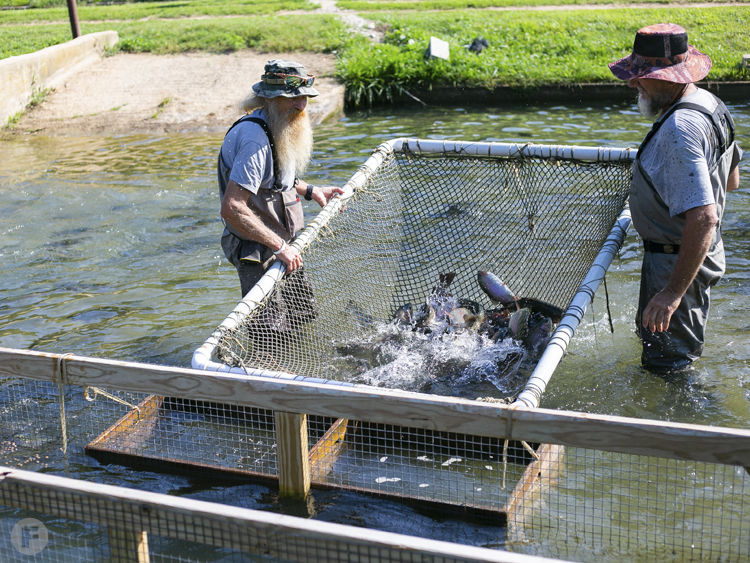 Down at the fish house, visitors can peer into divided sections of freshwater ponds to see the trout in various stages of growth. 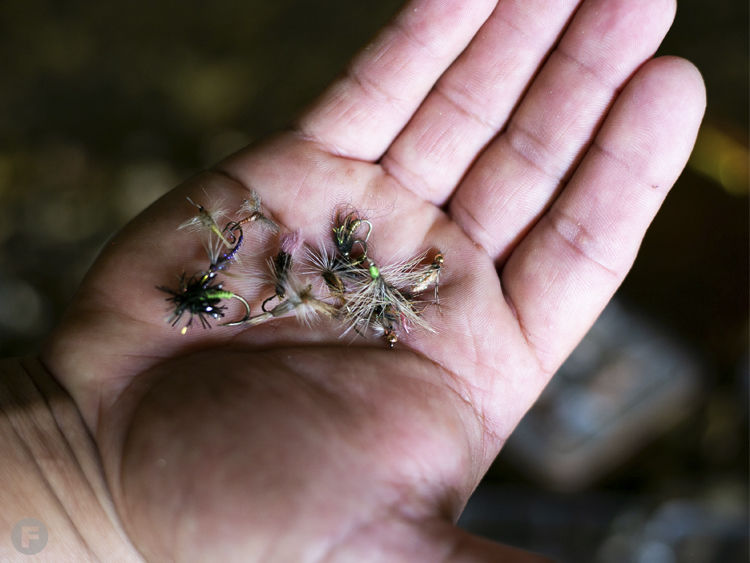 Prince nymphs are bait that imitates a small fly. 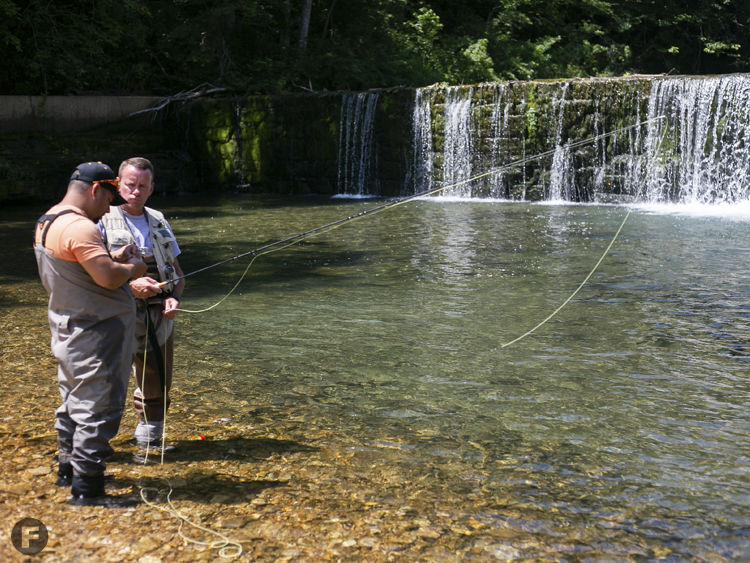 In an average season, the ranch teaches fly fishing to 150 to 200 people.

The property includes both catch-and-release and catch-and-keep fishing areas.

Rainbow Trout & Game Ranch is a 2,000-plus acre resort in the Ozarks about 25 miles from the Missouri-Arkansas border.

Down at the fish house, visitors can peer into divided sections of freshwater ponds to see the trout in various stages of growth.

Prince nymphs are bait that imitates a small fly.

In an average season, the ranch teaches fly fishing to 150 to 200 people.

In a spring-fed stream just outside of Gainesville, Missouri, anglers stand in a veil of mist, their rods drawn, holding canteens of coffee. The only sounds are birds chirping and the whip of lines hooked with bait hitting the water – until a trout bites. Water splashes and ripples dance through the stream as a fisherman reels in his catch. It’s morning at Rainbow Trout & Game Ranch – known to some visitors as Rockbridge – a 2,000-plus acre resort in the Ozarks about 25 miles from the Missouri-Arkansas border.

Since 1954, thousands of people have retreated to the family-owned ranch, where cellphone reception is spotty at best and rainbow trout are plentiful. Second-generation owner Ray Amyx is usually the first person each morning to unlock the doors of the ranch’s old general store – once a hub for the now almost forgotten former town of Rockbridge – and gets the coffee and tea brewing. Ray has fond memories of growing up on the ranch and spending afternoons playing with his brother in their clubhouse, the property’s iconic red grist mill.

“Growing up here was just about as good as it gets,” Ray says. “[My brother and I] were up and down the creek and all over the hillsides. There was no limit – who was going to say anything?”

In 1871, Ray’s distant relative, Capt. Kim C. Amyx, led a group of settlers nearly 500 miles in three ox- and horse-drawn wagons to start a new life in the Ozark wilderness. Previous settlers had already established the community of Rockbridge, where the Amyx family eventually put down roots. Today, the ranch is all that remains to honor the town's history.

Before opening the fishing ranch, Ray’s parents, Lile and Edith, purchased land just east of the lodge in 1945. A few years later, Ray’s uncle, Clay Amyx, bought the nearby general store. In 1954, Clay, Lile and Edith merged their land together and incorporated Rainbow Trout & Game Ranch. Lile bought Clay’s share of the property 12 years later, and Ray took over the family business in 1985.

The family began farming rainbow trout because of the robust spring-fed stream on the land; the water stays between 53ºF to 58ºF year-round, the ideal temperature for rainbow trout. However, trout weren’t native to the stream, so the family began raising them on-site. Today, the ranch features a full hatchery, raising between 250,000 to 400,000 trout each year. As the ranch and fishing business has grown, so have guest accommodations: The resort began with just two cabins; it now boasts 29, plus eight rental houses. Despite its expansion over the years, the ranch is still in a remote area and remains a destination for its loyal guests.

“It’s the end of the blacktop, and back then, it was the end of the gravel road,” Ray says. “We’re still relatively small and prefer to keep it that way… We’re so lucky to be out here in the middle of nowhere and have the excellent employees to take care of our clients the way they do.”

After visitors drive downhill through the shade of trees, guided by well-marked signs, they’ll find themselves at the old general store, where a knowledgeable front-desk employee waits to greet them. Front desk manager Lonnie Welch has met visitors from as far as Australia and Africa, but she says most people come from St. Louis and Memphis, Tennessee. Ray estimates that at least 75 percent of visitors are repeat customers. Some guests are fourth-generation regulars.

Whether it’s a weekend getaway or five-night stay, the ranch has activities to keep all members of the family entertained. The property includes both catch-and-release and catch-and-keep fishing areas, a restaurant, a pub inside the 19th-century grist mill, a heated outdoor swimming pool and guided horseback riding. Hobby anglers who want to continue catching without breaking the bank can do so in the catch-and-release stream nearly year-round: The ranch is only closed five days a year for the Christmas holiday.

Welch suggests that fly fishers bring waders with attached boots for colder temperatures, and rods, reels, and tackle are a must, although these items can also be purchased in limited quantities at the ranch store. Instructors are available for half day and full-day guided fishing. “A lot of people want a guide when they’re here,” Welch says. “It’s great to get pointers if you want to learn to fly fish, but you don’t have to have that… Fishing is pretty easy here, and the trout bite well.”

For those who do prefer help, fishing guides teach casting tips and knot-tying pointers. Pablo Sanchez Jr., a fishing guide at the ranch, enjoys offering insider tricks for making the flies look more realistic. For example, he will sometimes tie rubber bands on the fly to mimic the look of long legs. Guides teach novices how to cast their fly line from the rod using prince nymphs – bait that imitates a small fly – and mimic the bugs that trout feed on near the surface.

Once your line is fitted with a prince nymph, you might learn a basic roll cast: Bring your rod straight up, swing your wrist forward to lay the line into the stream before slowly pulling it back toward you. You then let the line settle in the water, and then finally swing the rod tip back into the deeper water. With enough practice, the line travels further and further out. If you do get a nibble, your guide will help you slowly reel the trout in; by taking your time, you wear the fish out.

If visitors have trouble catching trout, Sanchez recommends paying close attention to where the fish are swimming. Sometimes it’s easy to blindly cast the line without watching the stream. However, once guests get the hang of it, he says it can quickly turn into a lifelong hobby. In an average season, the ranch teaches fly fishing to 150 to 200 people. “Catching a big trout on a fly [line] is a challenge itself,” Sanchez says. “When you [reel] it in, it just pumps you up and makes you want to keep going.”

If you’re lucky enough to hook a trout, you can take it home for just $4.65 a pound. According to Welch, the average trout weighed 2½ pounds per fish this summer, but some fish were as large as nine pounds. Ranch employees will even clean, store and insulate your catch for safe travels; if you're not staying overnight, catches can be boxed on ice. Or, at the restaurant, your fish can be cleaned, gutted, filleted and prepared for you.

Down at the fish house, the ranch’s full-scale hatchery, visitors can peer into divided sections of freshwater ponds to see the trout in various stages of growth. It takes about 18 months to raise a single trout to catchable size. Eggs are collected by stripping the female fish and are then raised until they hatch in cylinder incubators.

Once fish reach adult size, which is about 1¾ pounds, Dave Cahoon, fish house manager, loads nets full of trout into a water tank in a truck bed with the help of his team. Cahoon then drives to the nearby stream to stock it. Although he only fills the stream with rainbow trout, occasionally a native sucker or bass will find its way into the stream and surprise a fly fisher. On average, the stream houses between 10,000 to 12,000 trout.

“Need more fish?” Cahoon shouts to Sanchez and a fly-fishing student right before he unplugs the hole of the trout carrier. Water pours from the truck and into the stream, carrying the fish along with it. The trout disperse through the clear water of the catch-and-keep stream. A few eager anglers stay to catch the new recruits, but it’s nearly lunchtime. In just a few minutes, the ranch restaurant will fill with hungry families.

Wanda Dalton has worked for Rainbow Trout & Game Ranch for more than 20 years; she started as a cook and worked her way up to kitchen manager. Today, she loves using her imagination to pair unexpected flavors together at the restaurant. Occasionally, Dalton will play around with ingredients just for fun, but if she creates a dish that she wants to add as a special, she’ll grab the nearest napkin and start taking notes.

Rainbow trout can have a drastically different flavor depending on how it’s prepared, she says; for those who prefer a sweeter flavor, she recommends the trout almondine, which is sautéed in amaretto and garnished with almonds and grapes.

“Definitely try the smoked trout, even if you don’t like fish,” Dalton says. “Nine times out of 10, people will like it no matter what.” The restaurant’s six-ounce portion of cold-smoked trout is garnished with red onion and served with dill cream cheese and crackers.

The ranch serves a range of other trout specialties, including broiled trout; grilled lemon-pepper trout; whole, boneless trout either baked, stuffed, pan-fried or salt-broiled; and seared blackened trout. Other must-try dishes at the restaurant include crab-trout cakes served with a spicy aïoli, batter-fried trout with clarified butter and lemon and a smoked trout salad sandwich on toasted marbled rye.

The restaurant also boasts a full breakfast menu, featuring items like a breakfast wrap with scrambled eggs, grilled onions and peppers, Cheddar or pepper Jack cheese with smoked trout and a build-your-own-omelet with smoked trout.

Ray’s favorite dish is the broiled trout, but he also loves getting the catch of the day served on a bun. He’s never been afraid to try new trout dishes, even as a child. “I wasn’t too picky, so I was the guinea pig,” he says with a laugh.

Like Ray, Dalton’s family has its own personal history with the ranch; her mother worked in the housekeeping department until retirement. “The owners and the people are very nice to work around,” Dalton says. “Ray’s family has always been super nice, and they’ve helped me no matter what. It’s a big family atmosphere.”

At its heart, the ranch is a family operation – for Ray and his relatives, Dalton and other employees, and also the generations of people who have learned to fly fish here. Year after year, families return to the ranch, including parents who grew up learning to fish in the streams who are now sharing the experience with their children. Set against the backdrop of the majestic and peaceful Ozark Mountains, the ranch endures as a retreat for those looking to get away, slow down and connect with nature, even if only for a few hours.

This incredibly simple dish is popular on the lunch and brunch menus at Lidia’s Kansas City.

The longtime kitchen manager oversees the restaurant at the trout hatchery and resort.