Skip to main content
You have permission to edit this article.
Edit
The Magazine
St. Louis
Kansas City
Springfield
Columbia
Other Cities
Recipes
Events
Videos
Promotions
Newsletters
Share This
1 of 10 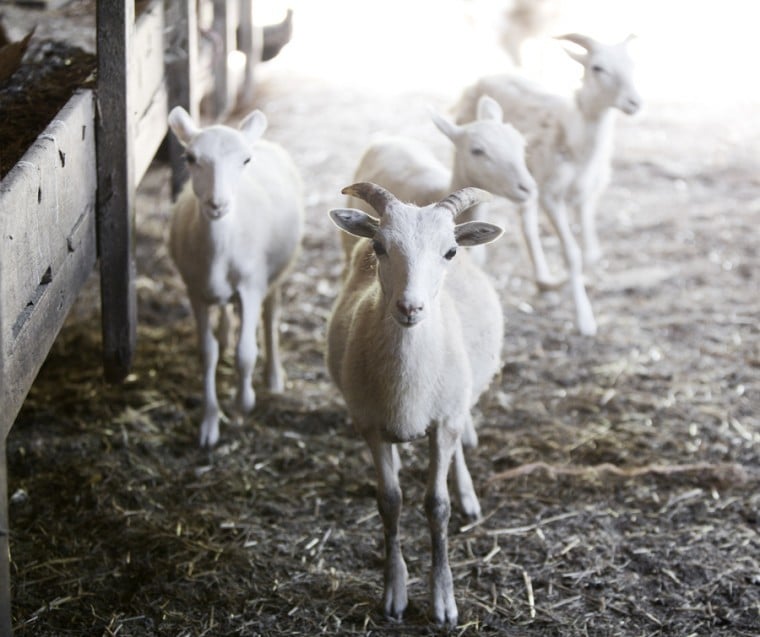 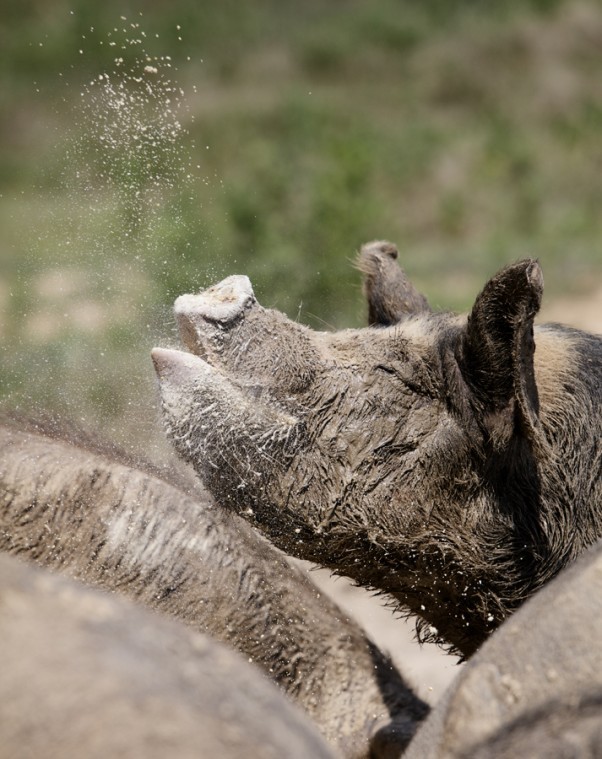 The sows make quite a show of eating lunch. 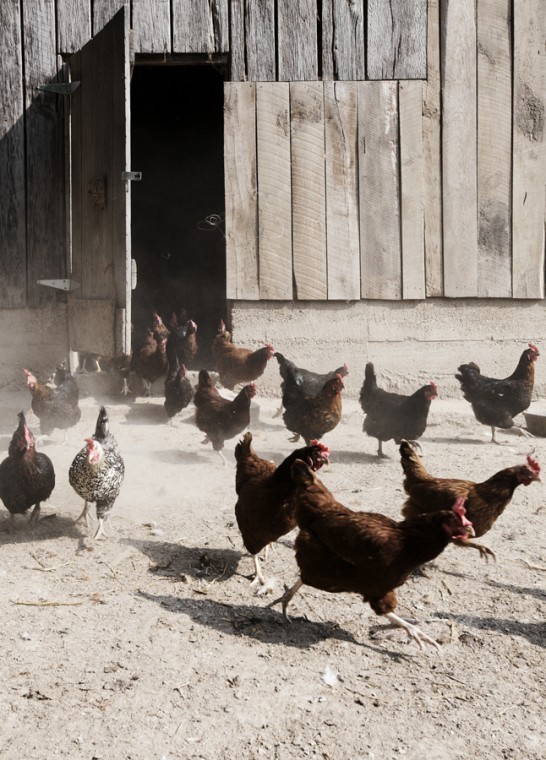 There are those headstrong chickens! 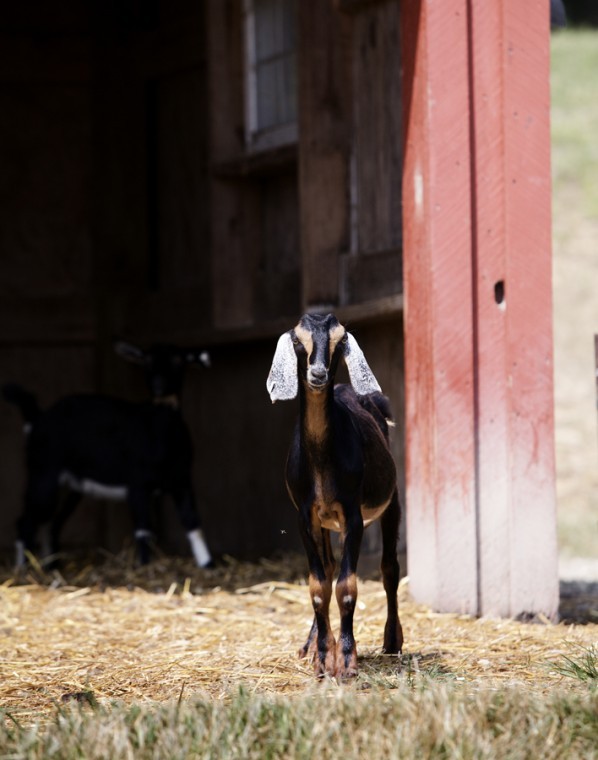 Kidding around with the baby goats. 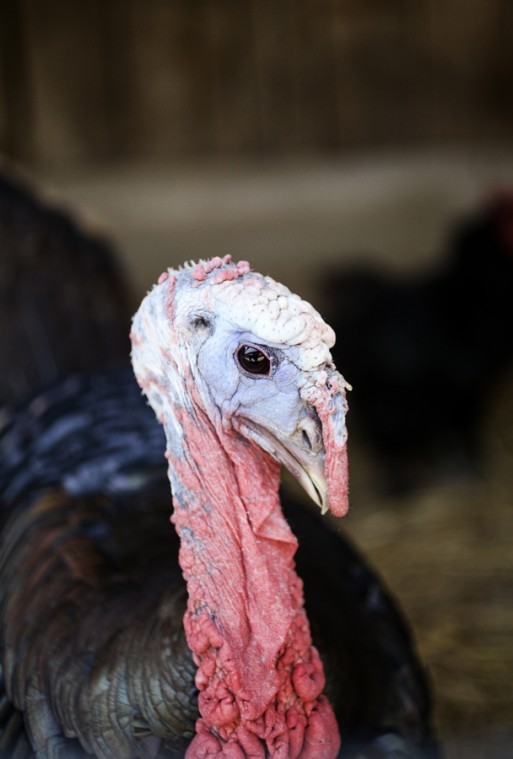 This old turkey has become a pet on the farm. 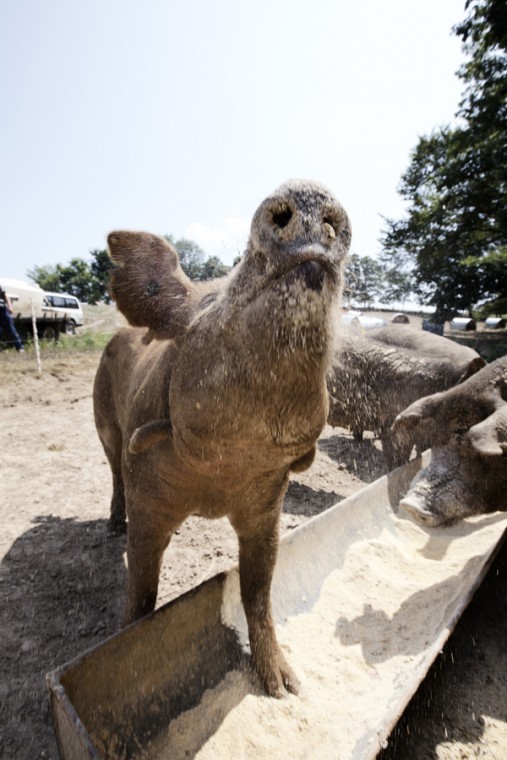 As Gerry Jones says, "Pigs are quite photogenic." 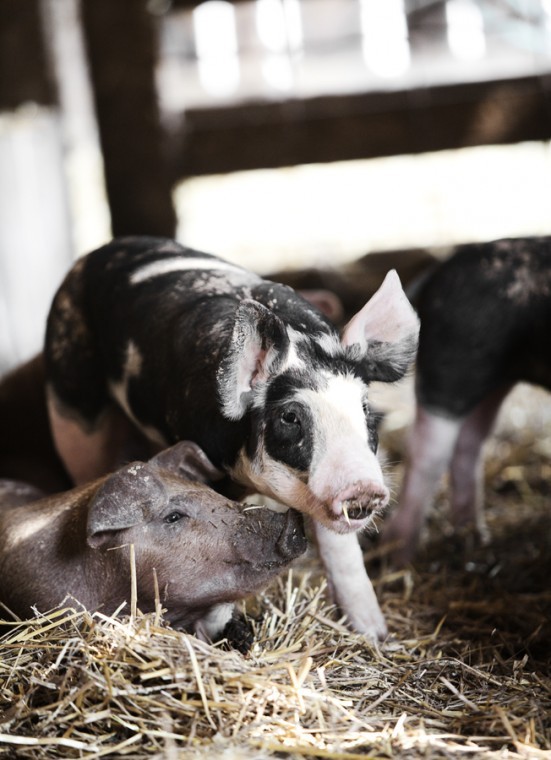 The piglets spend their first day in the barn, as they are weened from their mothers. 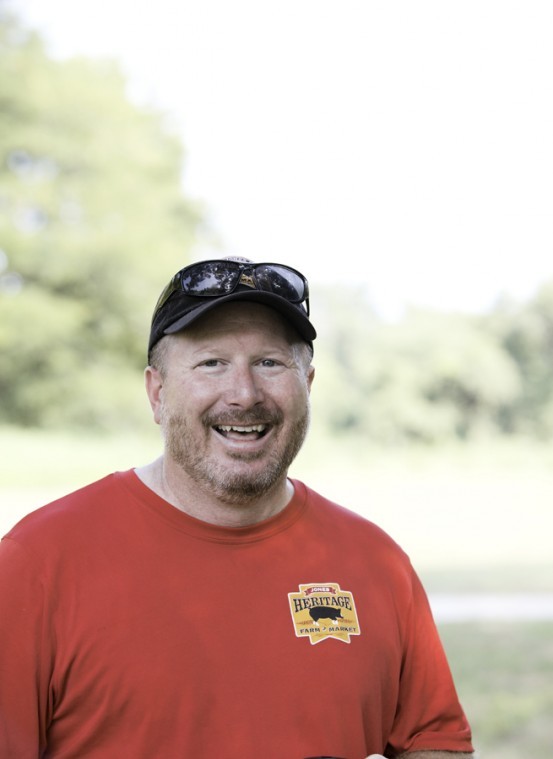 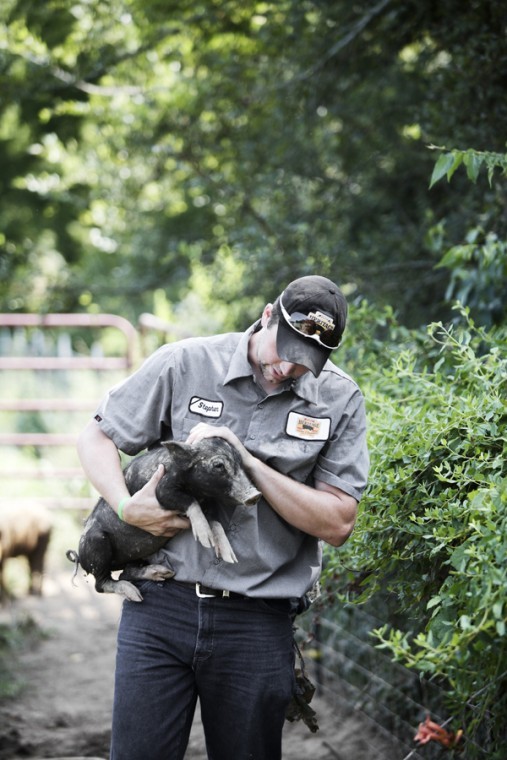 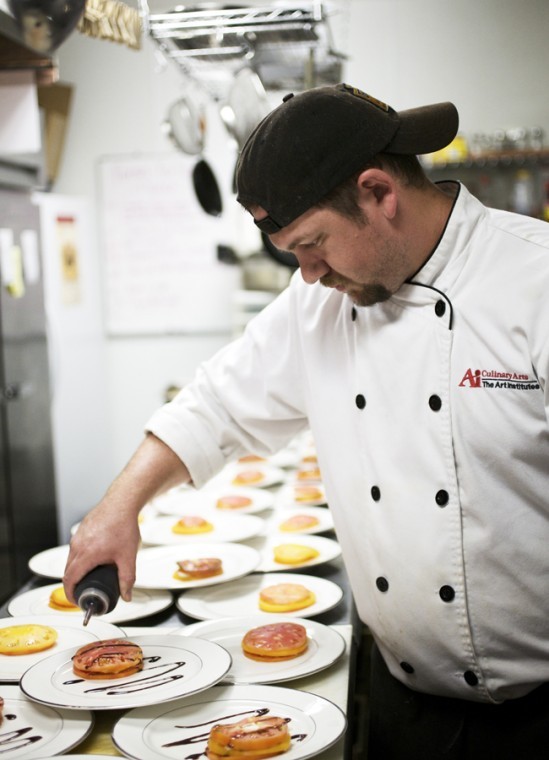 The sows make quite a show of eating lunch.

There are those headstrong chickens!

Kidding around with the baby goats.

This old turkey has become a pet on the farm.

As Gerry Jones says, "Pigs are quite photogenic."

The piglets spend their first day in the barn, as they are weened from their mothers.

As you near the end of the winding drive that leads to Jones Heritage Farm & Market in Cape Girardeau County, Mo., you'll find a major obstacle in reaching your destination: chickens. They cluck about, pecking the gravel-laden path with feigned oblivion to your presence and your attempts to shoo them. They'll move when they're ready. They're just letting you know from the get-go, so there won't be any questions about it: They are in charge.

Personality is in no short supply at Jones Heritage Farm. As owner Gerry Jones and farm-to-chef manager Stephen Sauer show us around the place on a hot, sunny August day, Sauer explains what it's like to get to know the animals on the farm.

"You can look at the pigs and say, ‘That's a grumpy pig and that one over there, he's a lover.'"

Jones and his family and staff raiseawide variety of heritage-breed animals, including pigs, cattle, chickens, lambs and goats. The farm has laying hens for eggs and an heirloom garden full of herbs and produce. The meats, eggs, fruits and veggies are sold in the on-site market and used in its Farm-to-Fork dinners, catering operation and special events. Locals from nearby cities, including Cape Girardeau and Jackson, Mo., come to the farm to purchase these fresh items - aswell as other market staples from nearby producers.

What's not used in the market is sold wholesale directly to some of St. Louis' favorite restaurants-such as Annie Gunn's, Bar Italia Ristorante, Cardwell'sat the Plaza, Cielo, Farmhaus andThe Scottish Arms. These notable eateries work with Jones to bring high-quality, all-natural, pasture-raised meats to the dining tables of our city.

What make Jones Heritage Farm's meats special are the animals' genetics and the way the animals are raised. "The meat from heritage-breed hogs has that old fashioned pork flavor that was prevalent before pork became ‘the other white meat,'" Jones says.

"Heritage animals require way more labor and way more time," says Jones. "You can't produce all-natural meat with confinement, so we have to give a lot more time and land to each animal than with conventional farming. When they're in confinement, they end up needing antibiotics. And then they're not all-natural."

The extra attention these animals receive doesn't just produce healthier, more flavorful, antibiotic-free meat. It helps preserve heritage livestock breeds. "The reason heritage breeds [have gone] out of favor, and some have become extinct, is because they don't do well in mass production conditions," Jones says.

"Berkshire is the Kobe beef of pork," says Jones. Berkshires make for the best pork belly and the intramuscular marbling in their loin is ideal. Jones is one of the few Red Wattle breeders in the area - and in the nation. He likes Red Wattle pork for its lean, beefy texture; flavorful dark red to purple meat; and great marbling. According to Jones, the breed is considered critically endangered, with fewer than 2,000 Red Wattles in the world.

"I heard it'sMario Batali's favorite pig," he says. "If Batali likes it, I figured I should try it."

The pigs are given a lot of room to grow: two acres of land per eight pigs. Jones' hogs rotate pastures until they reach 75 to 100 pounds, and then they're put into the woods to forage on fungi, leaves, nuts and other natural goodies. Unlike some other farmers, Jones allows his pigs to root, which is part of their natural instinct. Although it's destructive to the land, he says it's important to the quality of his product to allow his pigs to live naturally.

"It takes a number of things to make a pig that produces high-quality meat," he says. "You've got to keep the pig from being stressed out because stress leads to illness, blood-spots in its meat and no cooperation from the animal. Confinement, heat, lack of food and water, and a lot of new people around who it isn't familiar with will all stress a pig out. So we make sure our pigs have water and a lot of it all the time. And they need shade and a waller, or a mud hole, to keep themselves cool. We'll give a pig antibiotics if it gets sick - I'm not going to let an animal die - but we won't sell it because then [the meat's] not all-natural. But we rarely have a sick pig."

Seventy-five percent of the farm's sales come from pork products. The Berkshires produce two litters a year with about eight to 10 piglets in each litter. The Red Wattles have larger litters, and, according to Sauer, they're better moms. The farm relies on these good moms to keep business booming.

"Pigs used to be called ‘mortgage lifters,'" says Jones, "because small farms could make a lot of money off a single litter, and you usually get two [litters] a year." Profitability isn't their only attractive characteristic, however. As Jones puts it, "Pigs are easy to like."

And then there are those chickens.

"I wanted to focus on providing all-natural pork and chicken because it's harder to find those things from local farms [than eggs and beef]."

The primary breed of butcher chicken on Jones' farm is Cornish cross, and the laying hens are Rhode Island Reds, Black Stars (a cross between Rhode Island Reds and Plymouth Rocks) and Ameraucanas, which are known for their beautiful blue-green-shelled eggs.

The precocious poultry can be found everywhere on the farm: in the barn, stealing nibbles of the piglets' food, under cars, commingling with the ducks at the spring-fed pond, or even hitching a ride to the ‘Lou.

"I went on a delivery once, and when I opened the back doors of the truck, there were three chickens that had gotten in before I left," says Sauer. "So they rode with me on the rounds that day, and when I got back to the farm, I opened the door for them and they hopped out and went on about their business."

Sauer's weekly restaurant deliveries give him the opportunity to see what chefs are up to in the kitchen. He says a lot of chefs are asking for bellies, shoulders, loins and French-cut chops as well as whole animals they can break down themselves. All of the farm's goats go to St. Louis restaurants, namely Monarch Restaurant and Southern Bistro and YiaYia's Euro Bistro, and Jones has noticed an uptick in sales of goat meat lately.The most prevalent trend, however, is requests for specific sizes and weights.

"We get a lot of orders for roasting pigs or pigs at a certain weight to yield a particular tenderness or to use in a particular preparation," says Jones. "In the future, we believe chefs will start asking for special raising methods, such as a primary diet of acorns or hazelnuts."

The relationships Jones and Sauer have established with local chefs have been key to getting their business up and running. Their first client was Lou Rook III at Annie Gunn's, who spread the word about their superior products to other chefs. "We love the restaurant community in St. Louis," says Jones. "They've welcomed us with open arms. We're giving them something they need, and they're giving back by helping us stay in business."

"We've done well quickly," says Sauer. "Sometimes, a little too quickly, but it has worked out. I think being honest helps. If you can't do something for someone, don't say you can."

Sincerity is at the heart of everything that goes on at Jones Heritage Farm & Market. "My grandparents were farmers," says Jones. "They did things the way they were taught, and I'm surprised at how much has changed [in farming] in such a little amount of time. It's no longer a father-son business because few families can make enough money growing commodity products. So now there are very few full-time farmers.

"We consider ourselves artisan farmers," he continues. "We depend on people who are willing to pay more for high-quality, humanely raised, all-natural local products. We give our customers what they want, with no middlemen. We adhere to very strict standards. And we're proof that small farms can have success with specialty products."

Once a month, Jones Heritage Farm & Market hosts a special Farm-to-Fork dinner, featuring a multicourse meal made from the farm's yield (with a little help from neighboring farms when needed) and prepared by farm chef Walter Lents or by a guest chef. Past dinners have seen the likes of Steven Caravelli, Carl Hazel, Jack MacMurray III and Rob Uyemura. During our August visit, Lents prepared a menu bursting with farm-fresh flavors.

Check out some of chef Lents' amazing recipes from the August dinner:

Try this take on the traditional lamb and mint dish.

Caprese salad is a classic for a reason; it's also easily customizable. Try this cute update that makes your salad into a faux Napoleon.

Is there a better use for peaches?

Savory, smoky and downright satisfying, the Michelada is the O.G. of beer cocktails