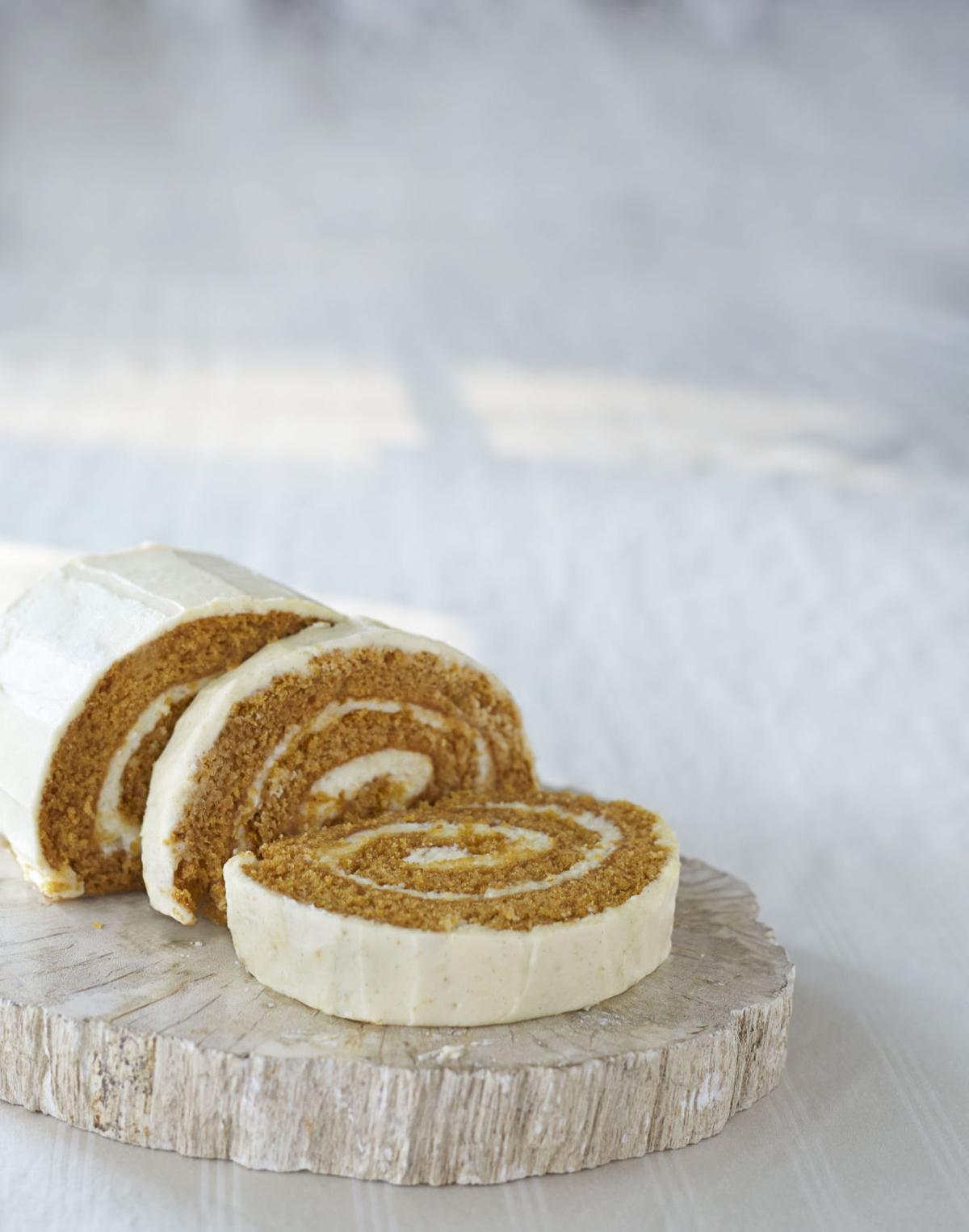 Thanksgiving and pumpkin pie: Many family traditions dictate that you can’t have one without the other. Although we sell a good number of pies each holiday season at Pint Size Bakery & Coffee, our appetite for all things pumpkin is insatiable – think pumpkin cheesecake, pumpkin-spice lattes, pumpkin muffins, pumpkin beer, pumpkin-chocolate chip bread, pumpkin whoopie pies and pumpkin-oatmeal cookies. This time of year, you’ll find nature’s jack-o-lantern in many great fall baking recipes. While I prefer making my own local pumpkin purée for Thanksgiving pies, store-bought is better for cakes. If you do want to make your own purée, try this handy tip: After roasting and puréeing the pumpkin, cook it further on the stovetop to remove additional moisture. Baking a roulade is an easy and beautiful way to celebrate the season, whether as an alternative to pumpkin pie for Thanksgiving dinner or simply as a seasonal treat to share with friends and family.

Christy Augustin has had a lifelong love affair with all things sweet. After working as a pastry chef in New Orleans and St. Louis, she opened Pint Size Bakery & Coffee in St. Louis’ Lindenwood Park in 2012. She calls herself the baker of all things good and evil. Learn more at pintsizebakery.com.

Sift flour, leaveners and spices into a medium bowl and set aside. Using a stand mixer fitted with the whisk attachment, whip eggs, sugar and salt until very light and fluffy, 3 to 4 minutes. With the mixer running on medium-low speed, slowly pour in oil and mix until incorporated. On low, add flour mixture slowly until just combined. Fold in pumpkin purée by hand. Spread mixture evenly in prepared pan, being careful that it’s not too thick in the middle. Bake for 18 to 20 minutes until the center springs back when lightly pressed. Allow cake to cool in the pan while filling is prepared.

| Preparation – Cream Cheese Filling | Using a stand mixer fitted with the paddle attachment, cream all ingredients together until well incorporated and no lumps remain. Scrape well, then beat until fluffy. Set aside.

| Assembly | Remove cake from pan, but do not remove paper from underneath cake. Spread filling evenly from edge to edge. Roll cake into a spiral, using paper to assist, by tucking in the short edge and rolling down the length of the cake’s long side. With the seam on the bottom, place cake on a serving platter and refrigerate, wrapped in plastic wrap, for 1 hour or up to 1 day to firm filling. Prepare glaze when cake and filling are set and chilled.

| Preparation – Brown Butter Glaze | In a heavy-bottomed saucepan over medium-low heat, melt butter, and allow to boil gently until sizzling stops and milk solids turn a light, golden brown. Immediately pour brown butter into a medium heat-proof bowl and set aside to cool for 5 minutes. Once cooled, add sugar and vanilla and whisk until a thick paste forms. Add half-and-half and whisk until smooth. Immediately spread glaze over chilled cake, allowing it to drizzle down the edges.

When preparing the brown butter glaze, after you’ve added the half-and-half, if the glaze looks “broken,” where the fat seems separated and the mixture is shiny or greasy, your butter was a bit too warm. This is easily fixed by allowing the glaze to sit at room temperature for 5 to 10 minutes, and then whisking it again until it comes together. The texture of your finished glaze should be pourable but thick; if it’s not, adjust with up to 1½ Tbsp more half-and-half.

Looking for a guide to cooking the perfect turkey or some creative desserts for your Thanksgiving dinner? We've got everything you need right here.

Christy is the owner of Pint Size Bakery in St. Louis and calls herself the baker of all things good and evil.

Savory, smoky and downright satisfying, the Michelada is the O.G. of beer cocktails