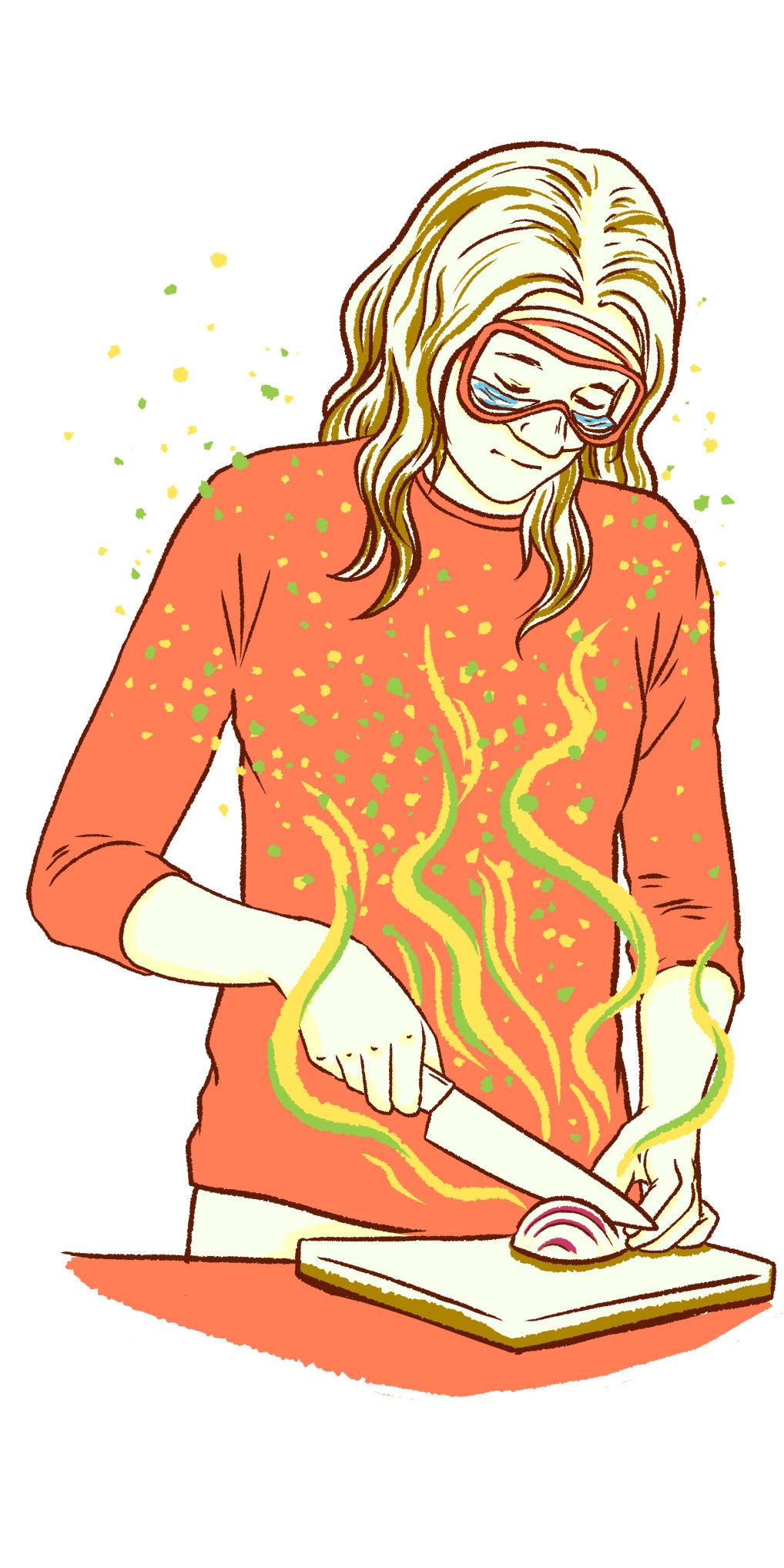 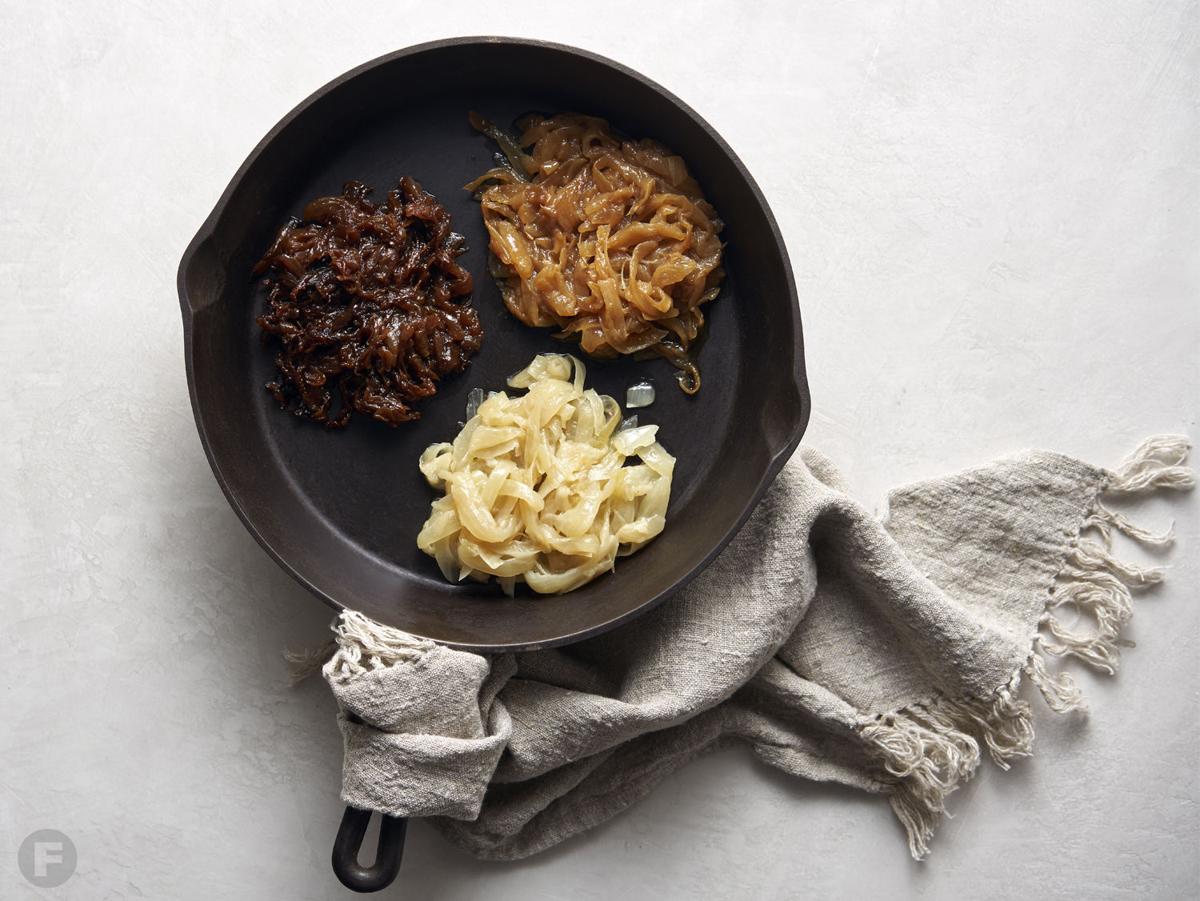 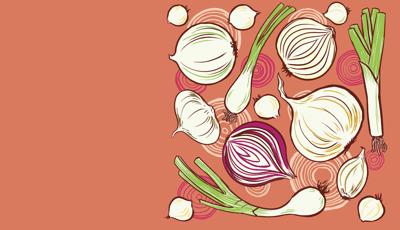 Scanning old cookbooks, I’ve found an abundance of recipes that call for a generic “onion” in their ingredients list. Even today, the practice persists on blogs and beyond, perpetuating the myth that all onions taste and act the same. In reality, they’re not so interchangeable.

When we shop, we’re met with an array of onions, which isn’t just for show. While some onions are more “all-purpose” than others, every onion is best for something. Knowing what each onion will do in different scenarios will only improve your cooking. Remember: Onions want to work for you, but you have to learn to speak their language.

1. Peeling Back the Layers

Onions are ineliminable, and learning how to cut them is one kitchen skill worth mastering. This technique will speed up your prep and give you perfectly square pieces of onion every time. Just follow these steps. 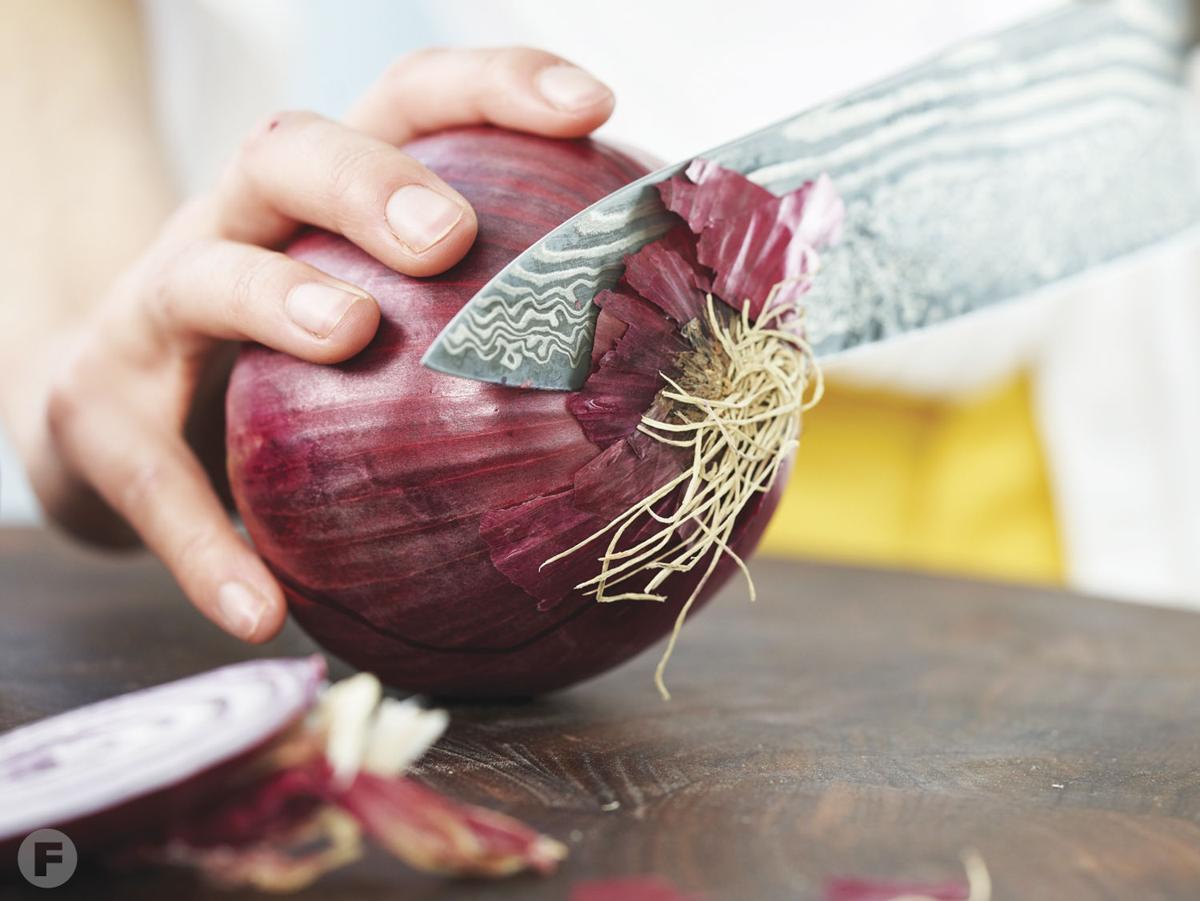 Trim the ends. Using a sharp knife (preferably a chef’s knife or santoku), trim off both ends of the onion, leaving the root intact. 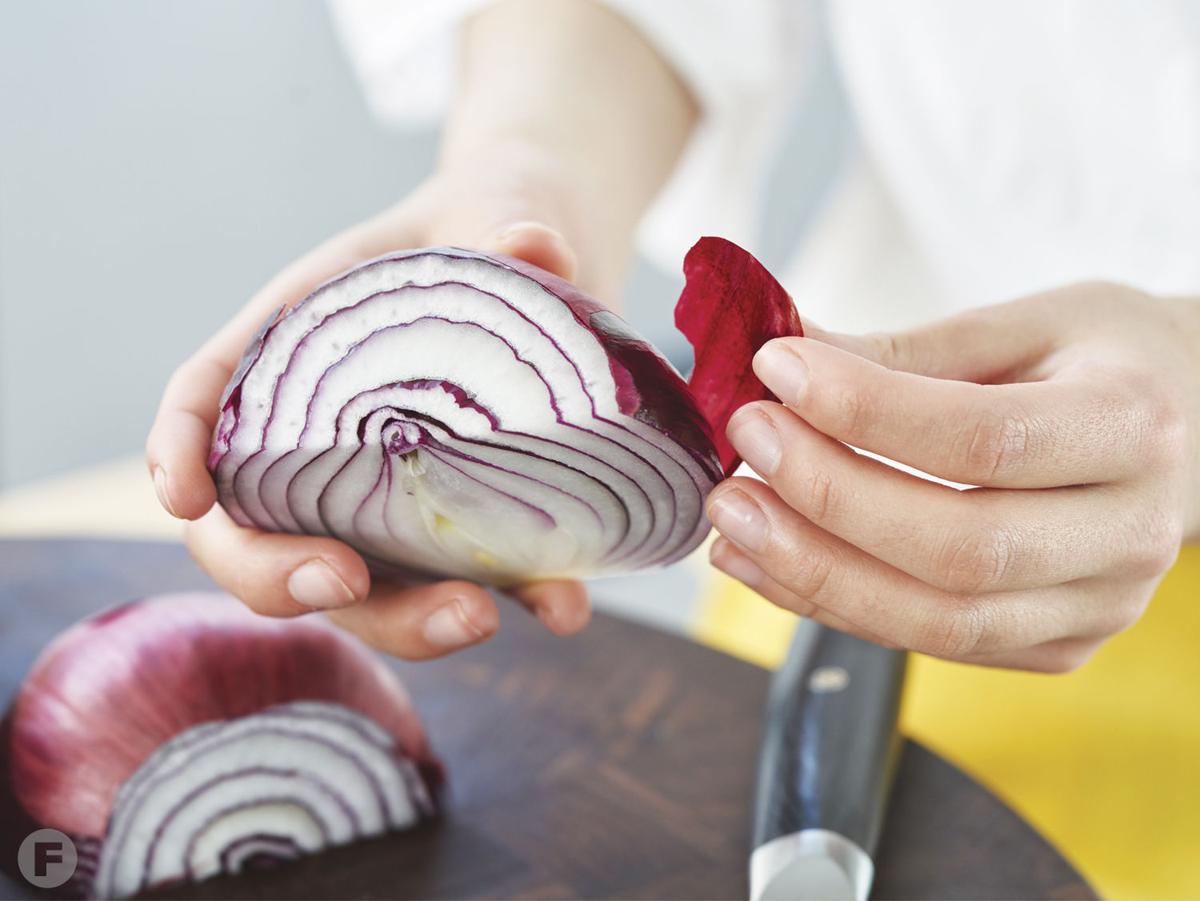 Halve and peel. With the root end facing up, cut the onion in half through the root, and then peel the skin off both halves. Discard skin. 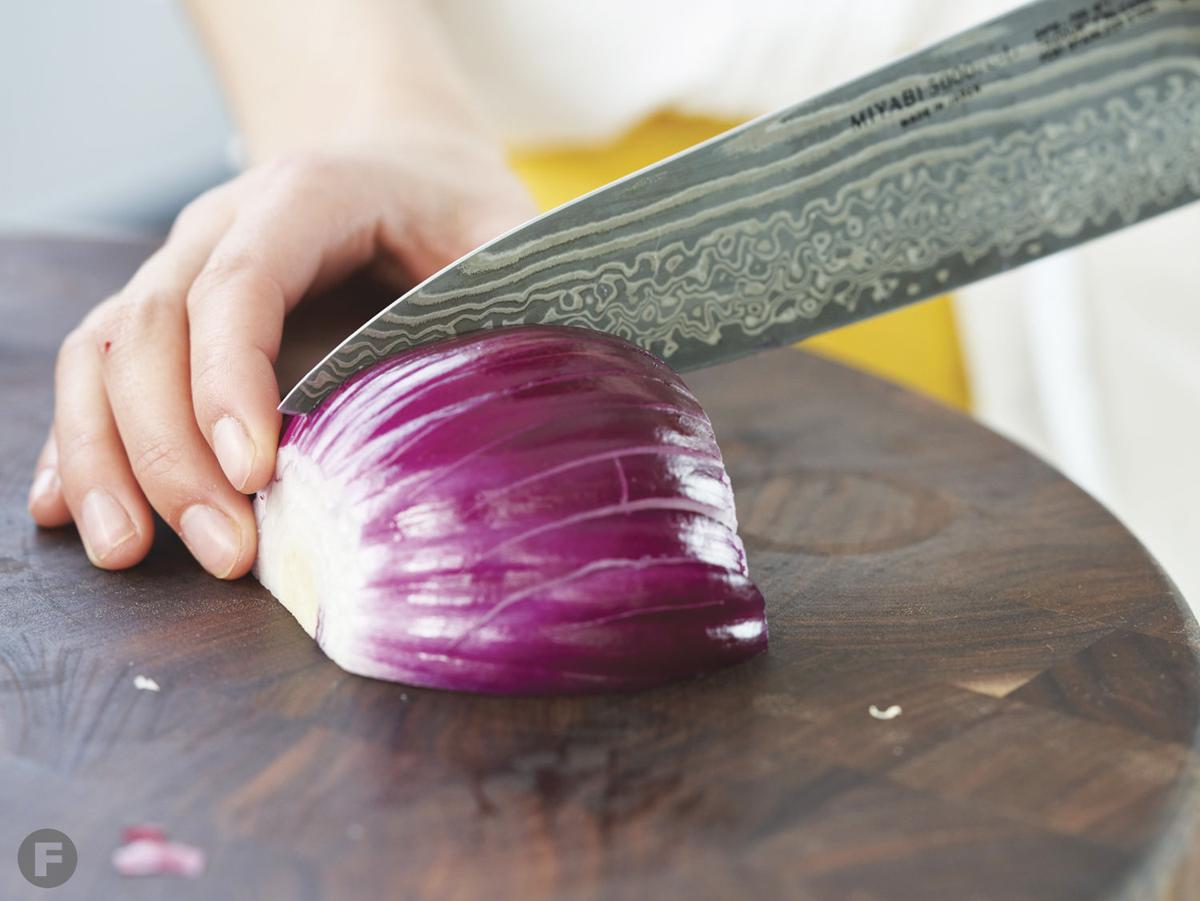 Start to slice. Lay one half of onion cut side down with the root end facing away from you. Make vertical cuts through the onion, being careful not to cut through the root. The knife cut that your recipe calls for – from medium dice to brunoise – will determine how wide you make the slices. 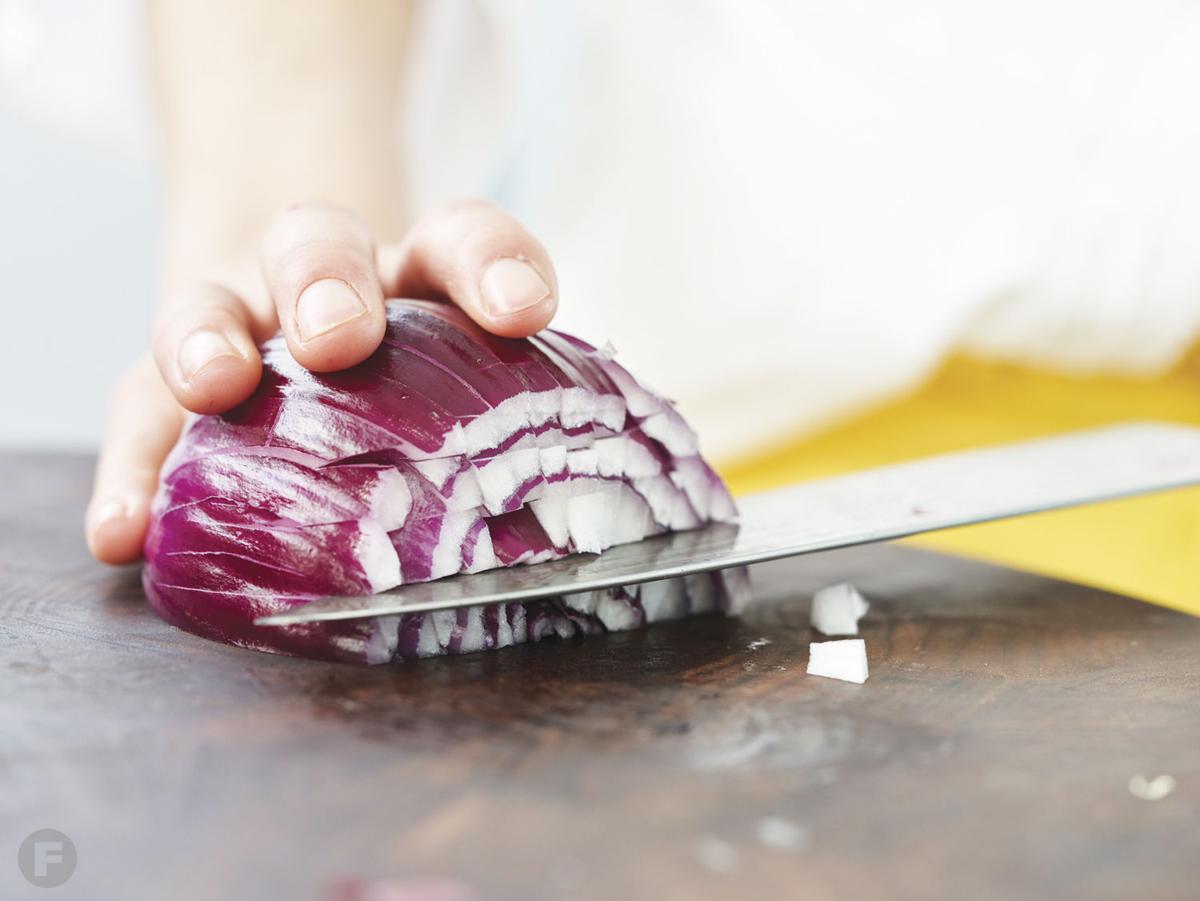 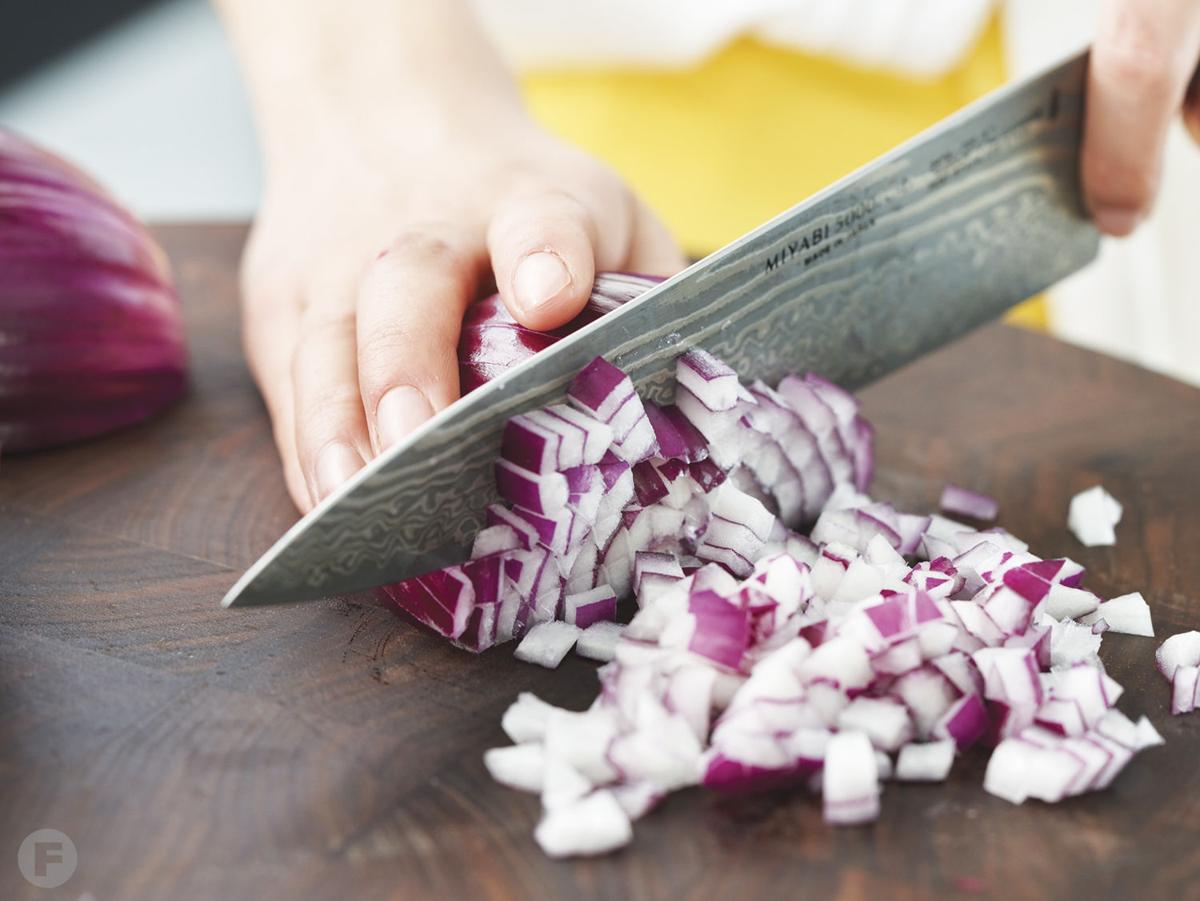 Chop. Make cuts perpendicular to your first vertical cuts and watch as the onion falls into expertly chopped pieces.

How to Dice an Onion

Trim the ends. Using a sharp knife (preferably a chef’s knife or santoku), trim off both ends of the onion, leaving the root intact.

Halve and peel. With the root end facing up, cut the onion in half through the root, and then peel the skin off both halves. Discard skin.

Start to slice. Lay one half of onion cut side down with the root end facing away from you. Make vertical cuts through the onion, being careful not to cut through the root. The knife cut that your recipe calls for – from medium dice to brunoise – will determine how wide you make the slices.

Chop. Make cuts perpendicular to your first vertical cuts and watch as the onion falls into expertly chopped pieces.

Looking for a milder flavor?

Cutting into an onion releases potent enzymes, and how you slice it – with or against the grain – determines the amount of enzymes released, which ultimately affects the flavor profile of the onion. Slicing an onion from pole to pole (or with the grain) causes less damage to the cell walls and releases fewer enzymes, creating a milder flavor. Slicing through the middle (or against the grain) causes a greater disruption and results in a stronger, more pungent flavor. Just keep that in mind the next time you’re making rings for your burger.

3. For Crying Out Loud

Slicing an onion is daunting on so many levels, not to mention, a race against the clock. No matter how honed your knife skills, it’s hard to make proper cuts when your eyes are rapidly filling up with fiery tears seconds into your dice. Is there any way to avoid the pain and suffering? Maybe. Grab your goggles and let’s dive in.

Does it work? Yes. Using a dull knife pulverizes the onion’s cell walls, and those damaged walls leak more gas into the air. A sharp knife slices more quickly and keeps damage – and, in turn, powerful gases – to a minimum.

Does it work? It depends on how long the onion is refrigerated. A quick chill won’t do much because the onion’s cells don’t have time to adjust to the cooler temperature. An overnight chill, on the other hand, just might do the trick. When you’re ready, remove the onion and slice it immediately to keep most of your tears at bay.

Does it work? Somewhat. Goggles prevent the gas from hitting your eyeballs, but those noxious fumes still get up your nose. You can either breathe through your mouth or fully commit and don a pair of goggles with a nose piece – you’ll look amazing and be fully protected.

Don't Try This at Home

The internet has proven how ambitious people can get with “solutions” to everyday problems. Here are some tips to stop the tears that simply don’t cut it.

While chewing gum or holding a piece of bread in your mouth. Both of these suggestions try to get you to breathe through your mouth instead of your nose, but aren’t very reliable.

After running your arm under cold water. What?

While the onion is submerged. This could work to trap the gases, but trying to slice an already slippery ball under water is dangerous.

After microwaving the onion. The power of the microwave will soften the onion, which means you’ll mangle it as you begin to cut it, releasing even more gas into the air.

You don’t need to hunt for the perfect recipe: How long you cook them depends on the onions you use (reach for yellow or sweet here) and how done you like them.

Blonde. Although not fully caramelized, blonde onions have developed that first undercurrent of sweetness and depth, making them ideal for French onion soup. Cappuccino-colored, they’re a level up from onions that have been sweated to mellow out their flavor, but still maintain a bit of bite.

Golden Brown. More time in the pan gives onions a darker tan. Golden onions are sweet and incredibly tender – use them for an irresistible onion jam, among other things.

The Dos and Don'ts of Caramelizing

Give them space. The onions need room to breathe, so use a large, wide skillet or heavy pan, and don’t overcrowd the pan or else they’ll steam and wilt instead of caramelizing. A little controlled steam at the beginning of the process softens and prepares them, but too much results in a bland mess.

Hydrate. The goal is evaporation, not dehydration. Keep things moving with a splash of deglazer to clean the bottom of the pan and get all that flavor back into the onions.

Check in. Caramelization is a lengthy process but not arduous. Frequently stir the onions and watch for changes in color and moisture; you’ll be rewarded with uniform caramelization. If you begin to feel like a prisoner in your own kitchen, start an easy project, such as meal prep, to keep you busy.

Rush the process. Like risotto, caramelized onions can’t be rushed. If you hurry the process, they’ll still be edible, but they’ll lose the magical complexity and depth that only time can reveal.

Confuse fat with liquid. A common mistake is assuming that adding more oil or butter will hydrate the onions or give them more body – it won’t. Too much fat will fry the onions instead of caramelizing them, most likely leaving a charred bitterness that you can’t fix.

Be afraid to experiment. Caramelized onions don’t need your help – the combination of oil, onions, water, salt and time is brilliant on its own – but that doesn’t mean you can’t play. Once you’ve mastered the basics, branch out. Throw a few sprigs of thyme, rosemary or oregano in for a layer of customized flavor. A splash of wine or bottle of your favorite beer is the perfect stand-in for water to deglaze the pan. And during post-caramelization, take different acids for a spin: Lemon adds a citrus element, while vinegars such as sherry or balsamic keep things dark and mysterious.

Deep Golden Brown. Nearly crisped, intensely brown onions have the most complex and concentrated flavor, with pops of char amidst a sea of sweetness. They’re a burger’s favorite topping.

Once you’ve settled on a style, you have to make it. Caramelizing to any degree involves the same steps; the only difference is the number of times you perform them, based on which milestone you want to reach.

Prep. Evenly slice the onion: ¼ inch to ⅛ inch is best for thickness. Too thick and the onion won’t caramelize; too thin and it will burn. You don’t need perfect, solid rings when caramelizing – the whole point is to make the onion soft and melty. And you’ve already learned how to cut an onion to achieve a specific flavor profile, so let’s put that knowledge into practice: Slice the onion pole to pole to get one step ahead in the sweetness game.

If you plan to add other ingredients – garlic, thyme, rosemary or the like – get those chopped and ready, along with a deglazing liquid – water, wine, beer, broth or balsamic vinegar. The liquid should be in a vessel you can control (read: no glugs).

Heat. Heat a thin layer of oil that can tolerate high heat, or a combination of butter and oil, in a large, wide, heavy pan over medium heat. Note: Use a stainless steel or cast-iron pan to develop the most “fond” (a.k.a. sticky brown bits that build up on the bottom of the pan) that you’ll scrape back into the onions as you cook.

Soften. You don’t want to steam the onions during caramelization, except when you do: right at the beginning. Throw the onions in the pan, season with a pinch of salt, stir to coat onions with oil and cover for 10 to 15 minutes to soften them. This creates a uniform texture that will go a long way to ensure your finished product is even in texture and color.

Caramelize. Finally, the fun part: Remove the lid and prepare to hover – you’ll mostly leave the onions alone, but this is no time to catch up on your favorite TV series. Caramelization is all about observation: While the onions cook, things are happening that you’ll need to regulate. Stir them every few minutes and keep watch for warning signs that things are going awry. If you find the onions have low or no moisture, add a splash of deglazer, stir and scrape the bottom of the pan. If the onions are experiencing uneven or rapid cooking, lower heat to medium low or low.

The entire process takes 45 minutes (golden brown) to an hour (deep golden brown), though blonde onions take less time – look for them to be done after 30 to 35 minutes.

Not Your Grammy's Creamed Onions

With all due respect to your grandmother, an update to the classic creamed onion recipe is long overdue

Chase the winter blues away with this boozy golden milk cocktail

Make the most of fresh grapefruit with these 3 recipes