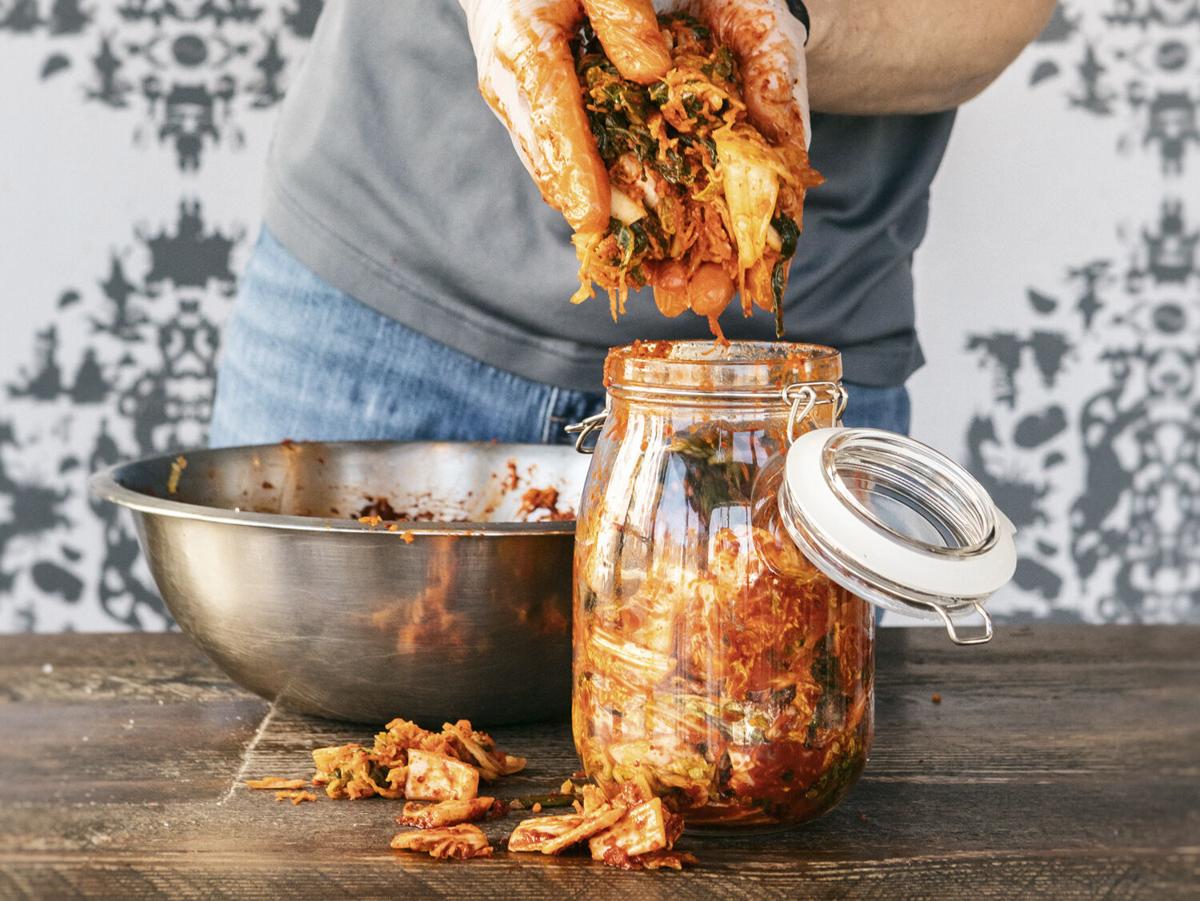 Is any ingredient more important to Korean cuisine than kimchi? 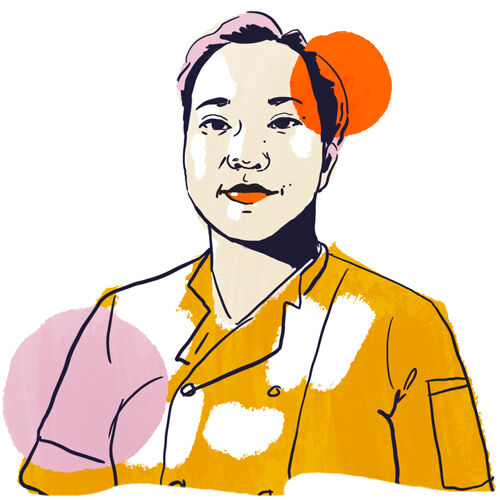 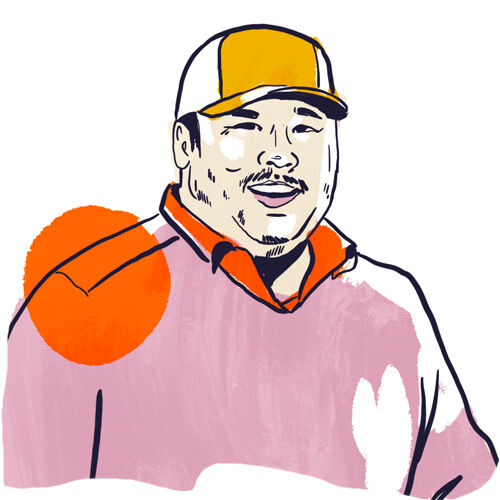 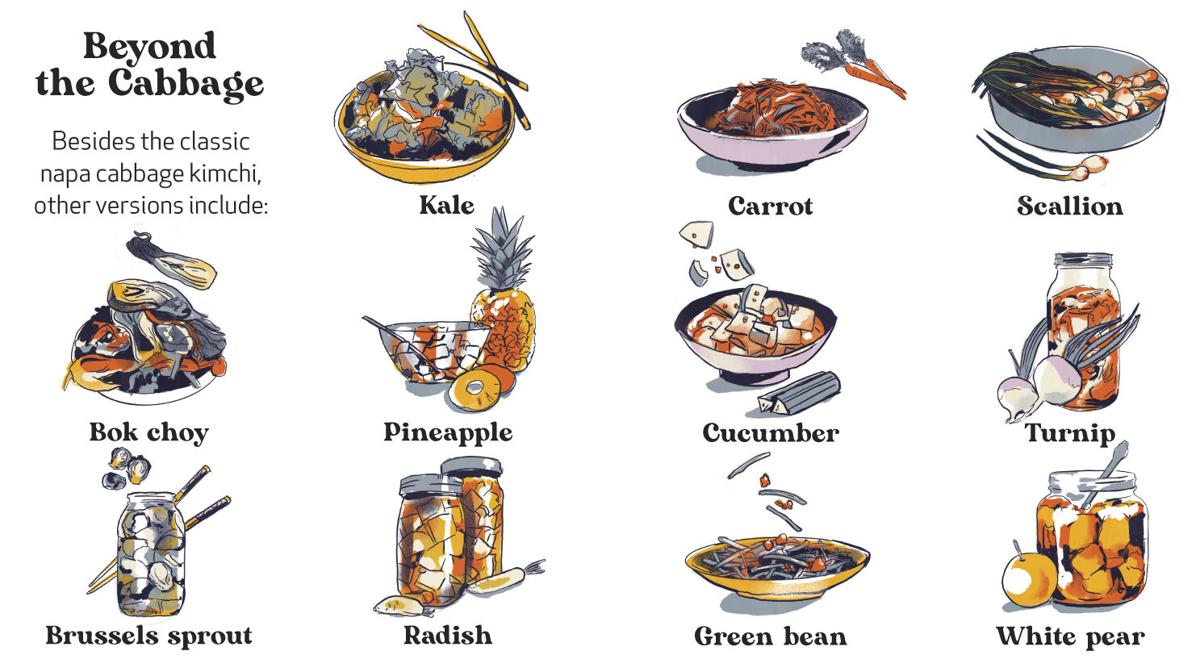 If there’s one ingredient that’s fundamental to Korean cuisine, it’s kimchi. Made with salted and fermented vegetables (most often cabbage), it’s sour, tangy and usually spicy, and it’s a staple in Korean households. In fact, Yi So-yeon, South Korea’s first astronaut, brought it on her flight to the International Space Station in 2008.

Kimchi has existed for thousands of years; its initial popularity is often linked to the spread of Buddhism, which sometimes emphasizes a vegetarian lifestyle, on the Korean peninsula. More recently, kimchi has taken the U.S. by storm, popping up on menus in everything from fried rice to dumplings and burgers to tacos. “It’s kind of crazy because even seven or eight years ago, I would never have thought about putting kimchi on the menu,” says restaurateur Munsok So, who offers spicy cabbage kimchi, spicy cucumber kimchi and white radish kimchi at Kimchi Guys in St. Louis. “I remember having a little bit of a phobia, but consumers now are naturally more curious about eating different things and more experimental with fermented foods.”

Think of kimchi as a condiment, ready to lend its bite and crunch to dips, stews, savory pancakes, noodle dishes, braised meats and more.

“Kimchi [epitomizes] Korean food: It’s bold, it’s strong and there’s a lot of flavor to it. When you see kimchi, you just see that as Korean food, because Korean food is not plain: It’s salty, it’s spicy, it’s pungent. Don’t be afraid of it – just try it!” –Jayeon “Debbie” Kim, chef, Debbie’s Kitchen KC in Kansas City

A word to the wise: Kimchi can get stinky, even in the fridge, so make sure the containers are sealed tightly and consider using activated charcoal as a deodorizer. “I remember, when I was a kid, my mom would be very, very careful about storing kimchi in the refrigerator because it has such a pungent odor,” says So. “It can kind of stain the flavors of other dishes in the refrigerator if you don’t store it properly.”

The Key to Making Kimchi

Fermentation, at the most basic level, is the process in which a substance breaks down into a simpler substance, usually with the aid of bacteria, mold or yeast. Lacto-fermentation – the process that produces kimchi as well as dill pickles, yogurt and sour beers – uses the live bacteria Lactobacillus to convert sugars naturally present in fruits and vegetables into lactic acid. A natural preservative, lactic acid helps fight bad bacteria and preserves not only the flavor and texture of food but also its nutrients.

It might sound complicated, but making kimchi at home is actually quite simple: 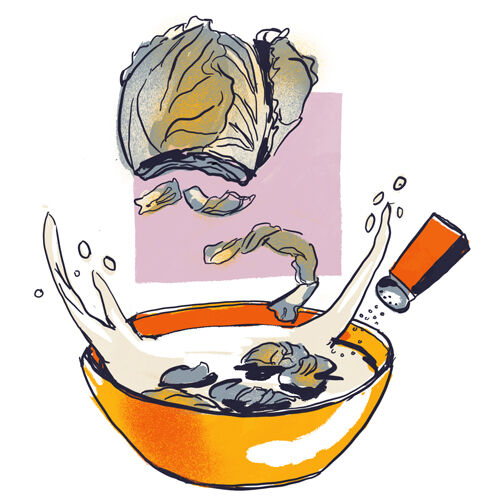 Brine: First, soak the base vegetable in salted water (a 15 percent salt solution is standard) overnight. This allows the vegetable to fully absorb the following flavors. 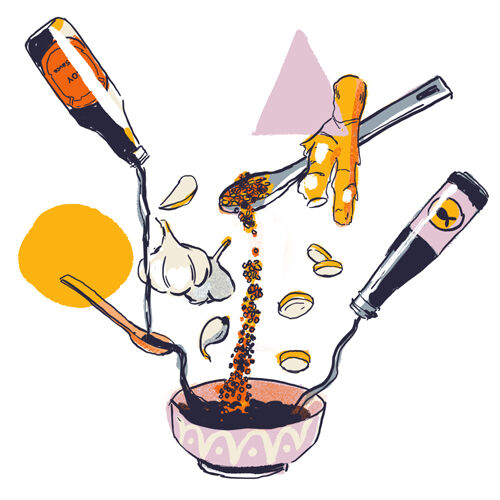 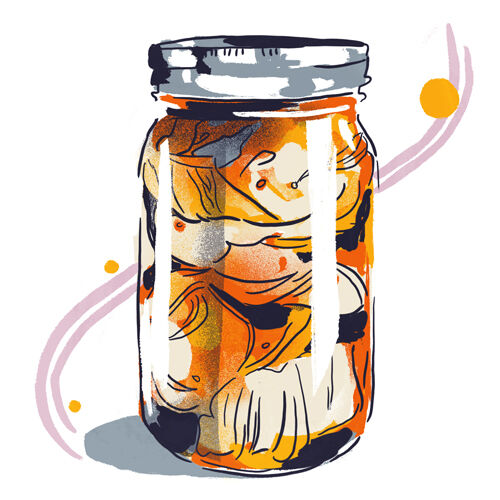 Ferment: Finally, drain the vegetable (reserving the brine) and coat it with the paste. Pack it into an airtight container and cover it with reserved brine. Seal container and leave to ferment at room temperature for 2 to 3 days, adding more brine as needed to keep the vegetable covered. After the allotted time, the kimchi is ready to eat, or you can put it in the refrigerator to continue fermenting and see how the flavor profile evolves.

How to Make Kimchi

Brine: First, soak the base vegetable in salted water (a 15 percent salt solution is standard) overnight. This allows the vegetable to fully absorb the following flavors.

Ferment: Finally, drain the vegetable (reserving the brine) and coat it with the paste. Pack it into an airtight container and cover it with reserved brine. Seal container and leave to ferment at room temperature for 2 to 3 days, adding more brine as needed to keep the vegetable covered. After the allotted time, the kimchi is ready to eat, or you can put it in the refrigerator to continue fermenting and see how the flavor profile evolves.

“Kimchi, at various stages, pairs with different foods,” says Cosmo Kwon, owner of Bawi Korean BBQ in Springfield, Missouri. Fresh kimchi pairs particularly well with steamed pork or your favorite style of eggs, for example. As it continues to ferment in the fridge, it will get funkier – the vegetable will get softer and the flavor profile will become more sour. But that’s how David Choi, chef-owner of Seoul Taco, which operates several locations across Missouri and Illinois, likes it. “Sometimes it does get a little too old, where it might have a little too much of a punch. You can offset that with sugar, but I think, definitely, the [funkier] the better for me.” The well-fermented, sour kimchi that Choi enjoys sings in dishes such as kimchi jjigae (kimchi stew), kimchi jeon (kimchi pancakes) and mandu (dumplings).

Napa cabbage is the most common base for kimchi, but chefs and home cooks alike use all kinds of vegetables and fruits for the fermented favorite. “There are so many different types of kimchi,” says Cosmo Kwon. “You might not like napa cabbage, but you might like the radish version. You might not like spicy versions at all; [then] there’s a white version [which has a lighter, crisper, more refreshing profile without the heat]. We can’t just group all kimchi together, and I would love to see more people get curious and ask questions, [then] try different [types] and see what they might like. Especially for those of us who are living in the Midwest and operating Korean restaurants, we would love to offer different types; it’s just that we wish that the demand was there. Just give it a try. Take that first step and see if you like it.”

At Smoke N Seoul in Gardner, Kansas, chef-owner Greg Stears combines Kansas City barbecue and Korean flavors, topping pork belly tacos with housemade mango kimchi, for instance. The mango kimchi features that signature sourness with a little spiciness, but it also brings some sweetness to the dish. Stears starts by chopping and brining unripe mangoes and then ferments them with a fairly traditional chile-ginger paste. After a few days, the mangoes have softened and become a perfect accoutrement to the smoked pork belly, onion straws, guacamole sauce and gochujang mayonnaise nestled inside warm corn tortillas.

Stears, who grew up in Kansas City, fell in love with Korean flavors thanks to his wife, a second-generation Korean American from Queens, New York. “Barbecue, especially Kansas City barbecue, has a deep, meaty, umami flavor to it, but it doesn’t, a lot of times, have that tang, that crunch,” he says. “You see a lot of [barbecue] sandwiches with pickles on them – that’s what we’re adding [with the mango kimchi], just in a different flavor profile. The kimchi provides a good contrast to the rich flavors of the barbecue, and people really enjoy it. [Kimchi] is a lot more versatile than you might think. Get creative with it. There are so many different ways you can use it.”

In Korea, kimchi also varies by region. In Jeonju, which is considered the food capital of South Korea, kimchi is made with fish sauce for a stronger flavor. In the southeast, kimchi is often brinier thanks to the addition of salted anchovies, and along the northeast coast, it even features fresh oysters – which Kwon says is definitely an acquired taste. In the northwest province of Hwanghae, residents skip the chile flakes and favor pumpkin as the base. On the other hand, if you love heat, look to the southern regions for the spiciest varieties of all.

Get cracking: These Missouri farmers offer duck eggs for a different kind of dish

Get the recipe: Boeuf and Pomme Hash with Lavender Balsamic Reduction from Aviary by Lavender Falls